July 18, 2008
Today is Guru Poornima, a day dedicated to all Gurus or preceptors. A preceptor is more than a teacher, for he not only teaches us things that extends our knowledge, but also those that enrich our lives, and make out life worth living. One of these was the Buddha. Whether we consider Him simply as a Buddhist guru, or the ninth avatar of Vishnu, it remains a fact that He was one of the greatest teachers of all time, and his legacy lives on today in the hearts of millions, some his followers, some simply his admirers. On this auspicious occasion, I take the opportunity to write an article on Gaya, one of the places most closely associated with the Buddha. At the outset, I must mention that I have not been able to visit Bodh Gaya as yet, and the facts I have mentioned have been told to me by those who have. This article is simply an attempt to share the knowledge I have gathered with others. 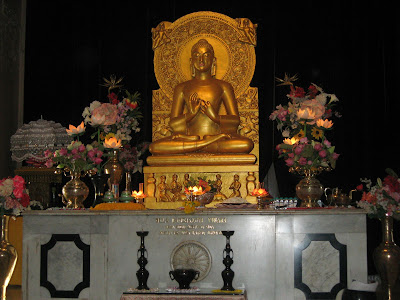 A Statue of Buddha at Sarnath

Bodh Gaya is about 18 Kms from Gaya. This is where Buddha came in quest of knowledge, and where he finally was enlightened. This is, truly, the birth place of Buddhism. There are, in all, seven sacred places for Buddhists, all associated with the life of Buddha. These are:

1. Lumbini – his birthplace, now in Nepal
2. Kapilavastu – his kingdom, also in Nepal
3. Bodh Gaya – where he attained enlightenment, in Bihar
4. Sarnath – where he gave his first discourse, in UP
5. Shravasti – where he taught many of his students, near Lucknow
6. Rajgir – where he loved when he fell ill, in Bihar, 80 Kms from Gaya
7. Kushinagar – where he breathed his last, in Bihar.

Buddha spent 6 weeks at Gaya. The first week he spent under the Bodhi tree, the second inside the temple, the third near a lake (it is said that when he placed a foot on the water, a lotus appeared under it), the fourth week in the area around the temple, the fifth under another Bodhi tree (which is no more- a pillar stands in its place) answering the questions of learned Brahmins, and the 6th week at the centre of the pond. It is believed that when a severe thunderstorm approached, Adisesha himself arrived to protect the Buddha, forming an umbrella over his head with his hoods. This is the reason Buddha is sometimes counted as the 9th avatar of Vishnu.

There are over 50 temples at Bodh Gaya, all built by foreign Buddhists. The most important one however, remains the Maha Bodhi Temple, where the Bodhi tree stands. 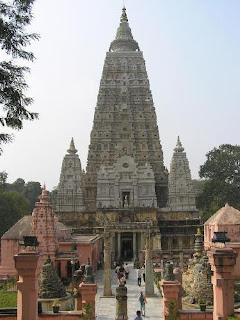 This tree, though not the original one under which Buddha sat, is however, its descendant. The original tree was destroyed by the Mughals. A branch of the original tree had been taken to Sri Lanka by some Buddhist monks, and Ashoka ordered a branch of that tree to be brought and planted here. He himself took care of this tree. This second one was cut down on the orders of Ashoka’s wife because she was jealous of the attention he paid to it. Nevertheless, he got a second branch from the Sri Lanka tree and planted it. This third one was destroyed during a cyclone, and another branch planted. The present tree is the 4th. It is an amazing thing that branches from the original tree flourish wherever they are planted, all over the world!
Bodh Gaya Buddha Gaya guru poornima