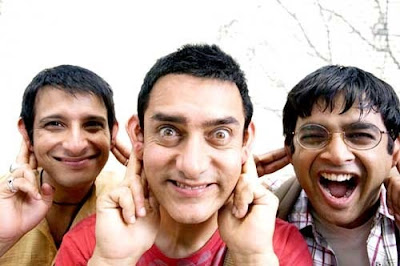 (Image from the net)


A few years back, when my sister recommended 'Five point someone', I picked it up eagerly, hoping to re-live some of my wonderful memories of my days at IIT. Unfortunately, the book not just failed to do so, it was actually a big disappointment, since I actually had to force myself to complete the book (a problem I have never had to face before)!

When '3 Idiots' was due to release, I was least interested in watching it, in spite of Aamir Khan's presence. Again, it was my sister who first raved to me about the movie, and after a couple more people encouraged me, we finally went and saw the movie yesterday!

If you ask Samhith, he can easily tell you what he liked about the movie - It was quite obvious, since he kept screaming, 'Aal izz well', both inside the theatre (to my great embarrassment) and outside too!!!

For once, Shankar seemed to enjoy a Hindi movie too, since he actually laughed all along, and didn't once drop off to sleep!!!!

As for me, the movie brought back loads and loads of memories, something the book failed to do! I must congratulate Aamir Khan an co. for the wonderful work they have done with the book! Of course, there is the usual "Bollywood masala" added in liberal doses, but I guess that is what actually draws the crowds.

When I first sat down to write this post, my fingers started typing out, almost on their own, my memories, just as they came to me. When I read through them again, I realised that much of it wouldn't really make sense to any of you, since most of you who read my blog know very little about me. What you do know about me is the Anu of the present - a mother, a housewife, a traveller, a blogger. Of the Anu of yesterday, the student, the dreamer, most of you know very little, especially since I have avoided writing about it so far. Seeing the movie yesterday made me want to share a little more of me with all of you, and hence this post is probably the most personal one I have ever written.

For those of you who are wondering if I was a B.Tech student, no, I wasn't one of those lucky ones......In fact, Engineering was something I didn't want to get into, and thank God, my mother didn't force me. Of course, she had her dream, that her daughter would become a doctor or an engineer, but she realised early that her daughter wasn't going to fulfill such grand dreams, and allowed me to follow my own path, something I am really grateful for. I hope, when the time comes, I shall be able to do the same for Samhith too!

I went the much easier route, studying Physics, reading literature, and ensconcing myself in libraries with whatever books I could find, and managed to easily complete my M.Sc, earning reasonably good grades, looked upon by teachers as a bright student, one likely to go far! Who ever knew how far I would travel from Physics!!!!!

Well, I entered IIT Bombay as a Ph.D Student, full of dreams of wonderful new inventions and path breaking experiments. Little did I know that my ideals and dreams had no place in this place which was all about the rat race. I had no interest in the mad race to the top, had never wanted to have anything to do with it, and soon found myself totally out of place! Added to my problems was a guide as naive as me, and after a year, I was told to change my guide. Even today, I feel sorry for the young professor I had wanted to work with, and wonder if he has stuck on and adapted to the situation.

This isn't intended to be a tale of the woes and the problems I encountered, but the memories that resurfaced as I sat watching the movie, so I guess it is time I move on.............

The first half of the movie was especially poignant, for it brought back those wonderful first few years - the fun and adventure of hostel life, making new friends, the awe of being at IIT, learning things in a new way, looking at Physics from a totally different angle.... I can just go on and on, for those were certainly some of the best years of my life.

But the movie also brought back the not-so-good memories - the discovery that, for my department at least, what was really of interest were the grants which could keep the money flowing in.... that there was no money in trying out something new, which would involve more expenditure, and hence was not feasible........the realization, which, unfortunately came too late, that my guide had no intention of helping me complete my Ph.d in the requisite 5 years, but actually expected me to work for at least 10 years before I got any results, as I was doing something new!!!!

The movie, as movies do, exaggerates quite a lot, but there is no exaggerating the kind of depression that one falls into, when dreams are shattered and the scales fall from ones' eyes! In  the four years I spent there, there was just one attempted suicide, (thank god, the boy survived, but he did not return to the campus as shown in the movie), but there were many who succumbed in other ways - there were those who almost went mad, one who was found in the garden lying stark naked on a December night, one who disappeared for days without even a word to his wife....... I shudder even as I recollect those horrifying moments..........

The "I QUIT" scrawled on the wall by the boy who commits suicide seems especially poignant, for I Quit too, and thank God that I didn't succumb to the pressure by taking the extreme step. I simply walked out one fine day, and never went back...... not even to get back my documents.

Most of all, the movie reminded me of the wonderful friends I had made on the campus, with few of whom I still am in touch...... In a way, there were 3 of us too, all idiots in our own way - I quit, and found myself married, with a kid, and finally have found recourse in writing...... another completed her work, fighting against all odds, but now she is married and a mother too, and like me, has chosen to stay at home. The third, the one who had the easiest path of the three of us - a good and helpful guide, many friends ever ready to help out, a bright future ahead, is the one I have lost touch with.... I hope she is fine, and doing good, wherever she is......

So, this post is dedicated to my IIT friends, Pro, who stood by me through thick and thin, and whom I can call even today and be assured that she will hear me through and help me out, Pallavi and Vandana, whose whereabouts I have no idea of, but whom I think of, regularly, Sudha, who I am in touch with, off and on, and who has been equally supportive, and of course, all those others whom I cannot name individually, but who were all instrumental in making my life at IITB memorable!

Time, they say, is the great healer, but 9 years have passed since I quit, but the wounds haven't yet healed. I have not yet gathered enough courage to visit the campus, and face the people I once worked with..... Even when I pass the campus, as I often do, given the place I live, my eyes still fill with tears. One of my best friends ever used to tell me to first forgive, for only then could I forget. I think of him every time I pass the place, and tell myself again and again that it is time I forgive and forget. Maybe one of these days, I shall maybe make a detour inside the campus and try to see if I can, now that I have moved on, actually get over the most difficult phase of my life!

There are times when I wonder if I made the right decision when I quit, but I know, deep inside, that given the same situation, I would certainly do the same thing again, so I have no real regrets. If I do have any regrets, it is that I could not complete the degree I had set my eyes on, but the dream still remains, and I hope, I shall someday make my dream of prefixing a 'Dr." to my name, come true someday - if not in Physics, some other subject!! As of now, my priorities lie with my son, the utmost one to bring him up in a way which helps him make the right decisions, all by himself, so that he knows where he wants to go, and chooses the right path. My own dreams come after that, I have all my life ahead to make my dream come true.

Well, reading over the post, I realize that this is one of the longest posts I have written in a long time, and certainly the most personal one, as I warned you earlier. I hope writing down and sharing my experiences will help me, but that is something only time will tell.