May 15, 2010
Before I complete my series of posts on Binsar, there is just one more thing I wanted to post. It does not concern any place of interest or any great experience, but an experience which was a first for me, and brought up a lot of thoughts….. I kept this one to the last, since I thought I would get out the ‘touristy’ stuff before coming to this……. I even wondered if I should put it up before I finally conclude the series, but then decided to, since it relates to the mountains intimately, and my trip too….
We were returning after our trip to Patal Bhuvaneshwar and Bageshwar, tired and worn out after a day spent on the road….and couldn’t wait to get back to the room and put our legs up. Suddenly, as we turned a curve on the mountain road, I saw something bright and shining, and wondered what it was. Our driver had missed it, and we left it, thinking that it must have been my imagination. After a few moments, however, as we rounded another curve, our eyes glimpsed a glow, and our driver slowed down to see what it was - a forest fire!
I had only heard of forest fires so far, and had never seen one, so I was curious about it, and asked our driver to stop so that I could take photos… however, he said it was dangerous to stop there, and I made the most I could from the moving vehicle…… 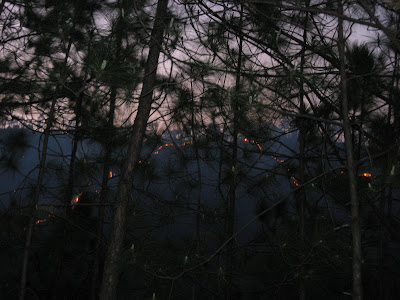 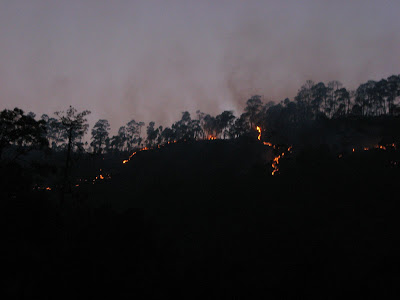 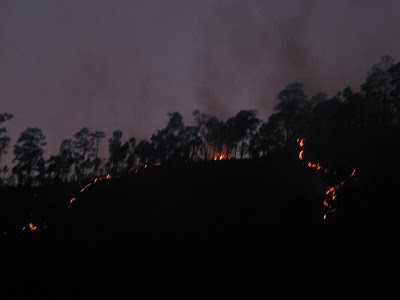 As we got to talking about it, we saw a forest department vehicle speeding towards it, probably to bring things under control. However, as we rounded another hairpin bend in the road, we realized that we were much closer to the fire than we had imagined, for a flaming branch fell, just missing our car! A close shave indeed! Our driver sped on, not even uttering a word till we left the fire far behind us!
Once we were sure that the danger was past, I asked our driver about it, and if such fires were common, he replied that yes, they occurred quite frequently in the summer months. The locals attributed these fires to the pines which were all over the place, and the careless people who threw lit cigarettes out of speeding cars. The pines catch fire fast, and in the summer, the needles which have fallen in heaps around every tree act as fodder for any stray match thrown by the careless and ignorant people, starting fires which destroy everything in sight!
Among the locals, the pines seemed to be the villain of the piece – after all, these trees yielded nothing but turpentine and pine cones – and once the turpentine had been drawn, the trees were useless, and they usually fell in a storm. The fallen trees were no use to anyone, especially since few still used wood for burning, but the fallen trees and their needles aided the forest fires too……
Most of the pines we saw near the road had blackened at their base – indicating that the turpentine was gone, and so was the tree… it would soon fall and become fuel for either man or nature….. 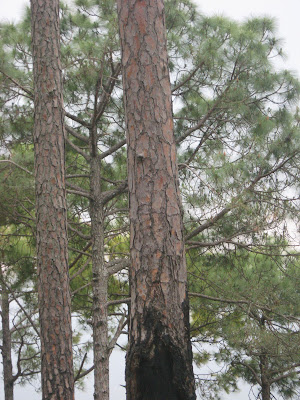 However, what struck me was the attitude of the locals that it didn’t matter if the pines were gone…… they didn’t yield much, anyway…… asked what they were doing to replace the pines, they had no answer!
This seems to be the attitude of most of the people I meet everywhere I go – we take as much as we can from nature… but as to replenishing her, we don’t even think of it! I wonder how long things can go on at the same rate if things stay the same….. while I can understand people’s preoccupation with their livelihood and earning enough to live, what I can not understand is the ease with we take nature for granted, grasping with both our hands for everything she has, but our resistance to control our greed and make due returns to her!
It is at such times that I wonder if I should travel at all, for I am also one of the many tourists who leave their footsteps behind, even though I try to minimize their effect! This one incident acted as a major dampener to my trip, for I came back with many more questions than I had set out with….
P.S. Shankar had an entirely different take on the fire – he felt that it was not a natural one, but one set by the villagers, probably to clear out the useless pine trees and their needles, and clear out the ground so that it could be used for farming or at any rate, something more lucrative than pines! Quite possible, I would say, considering that this happens all over …. but makes me shudder even more, for it is so easy for a man-made fire to get out of control of the hands which started it!