August 24, 2012
The mountains appeared in the distance, their peaks covered by the clouds.

As Samhith said, it appeared as if someone had tried to mix two colours – green and grey.

Moving further into the mountain ranges, the clouds seemed to disappear, and the lush greenery of the Western Ghats was clearly visible. 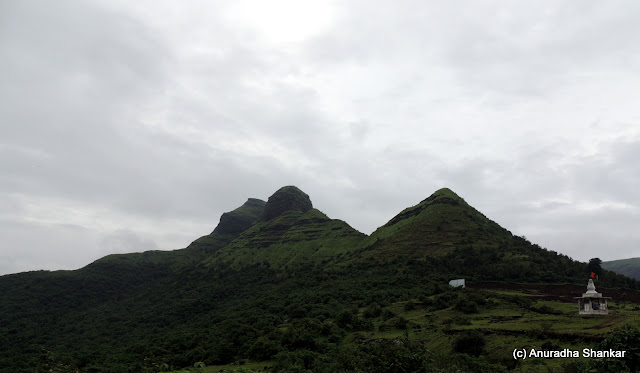 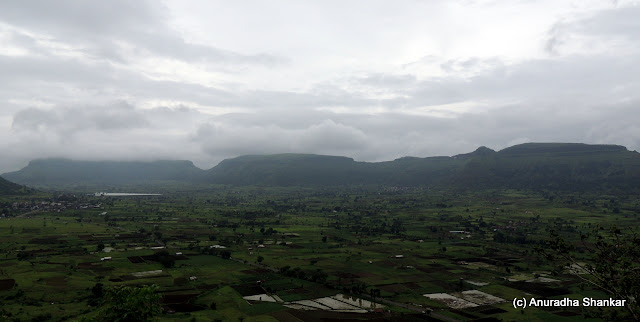 And as we moved towards them, the clouds came closer too.. 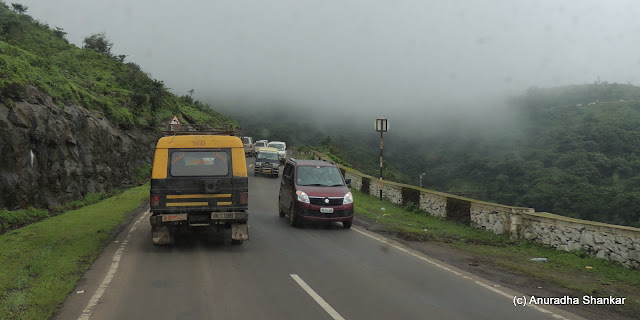 As the roads took us higher, the clouds and the fog seemed to change the very landscape. Grey and green seemed to be having a contest to see who would triumph over the scene... 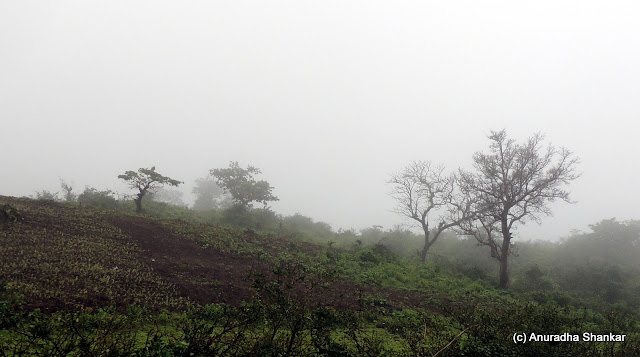 The vehicles ahead of us were no longer as apparent as they had been before.. 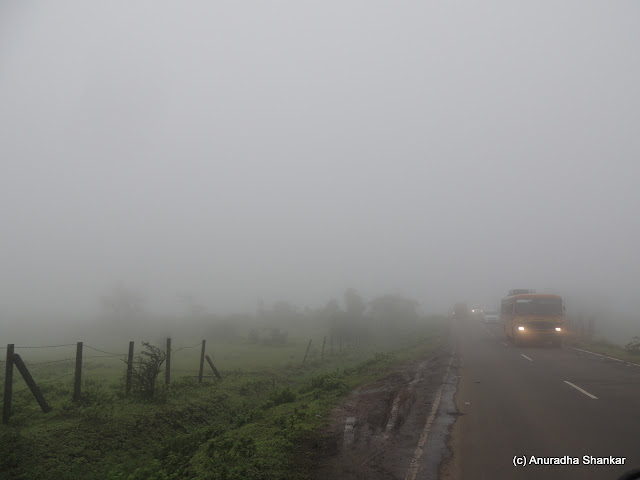 Soon, we could see little ahead... 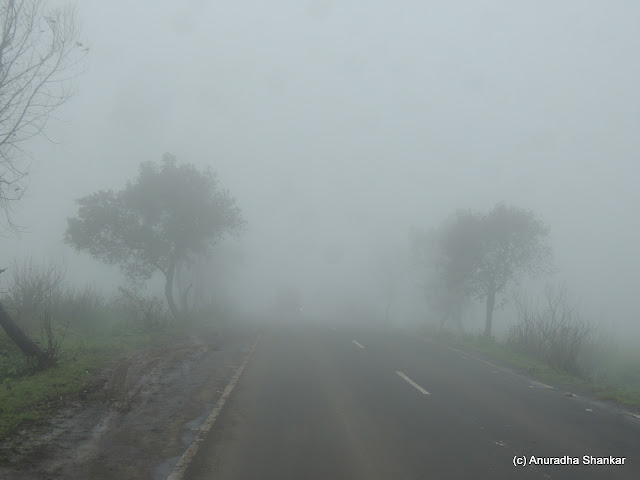 .....But the headlights or taillights of the vehicles ahead of us! Not even their bright colours could make them visible as the fog took over! 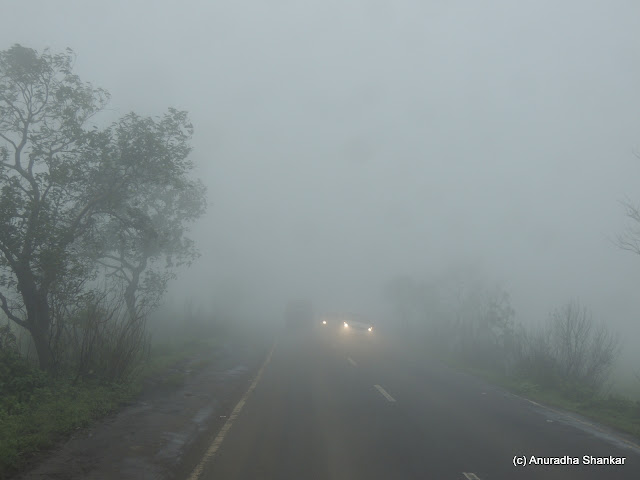 Soon, even the green grass seemed to disappear.. 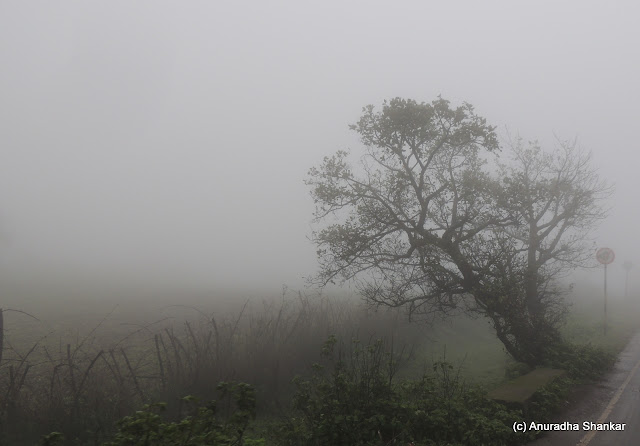 As for the mountains, they were nowhere in sight! it was difficult to believe that we were on a mountain, surrounded by peaks! 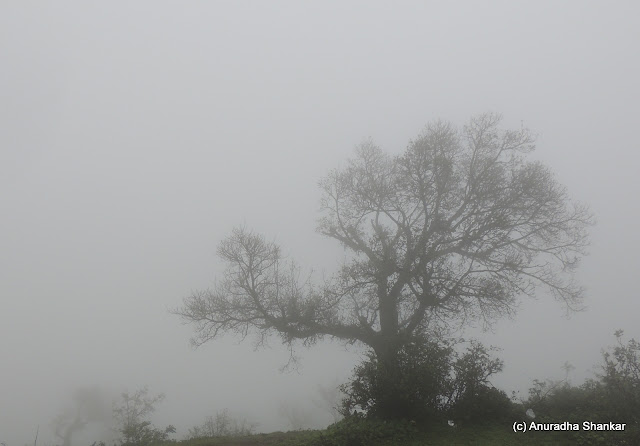 We were at the Saptashrungi Temple at Vani near Nasik. The temple is dedicated to the goddess Mahishasura Mardini, the slayer of the demon Mahishasura. She is named Saptashrungi for the seven peaks that surround her abode here, but none were visible as we began climbing the steps to her shrine. 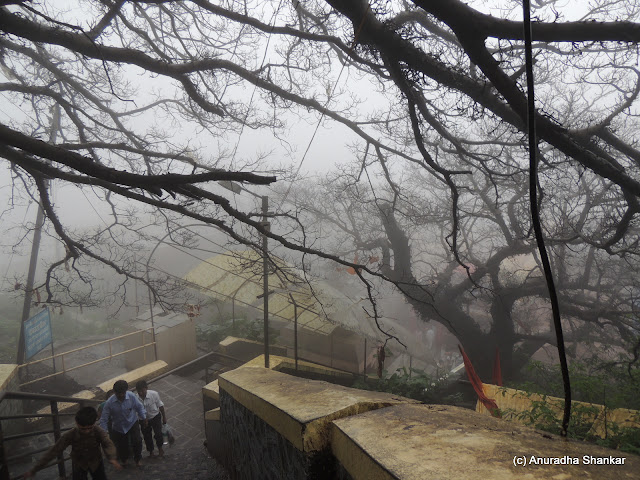 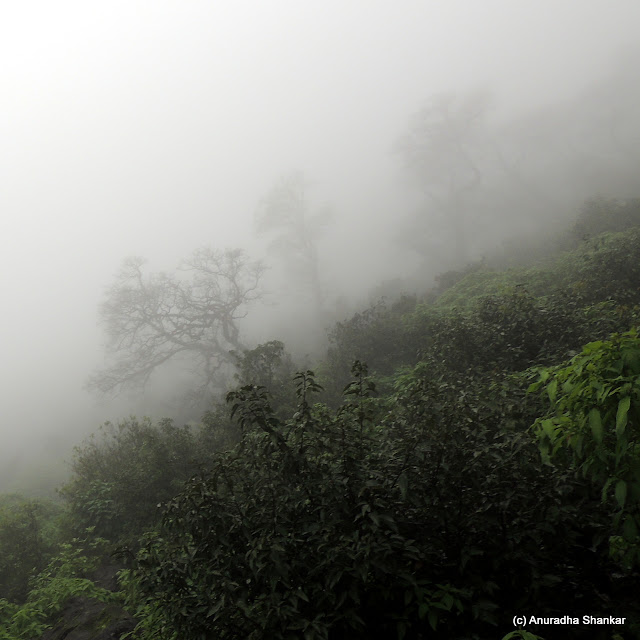 The Saptashrungi temple holds an important place in my heart. I have visited the temple only once before... the day after Diwali in the year 2007. This was one of the few temples we visited as a family – me, Shankar, Samhith, my in-laws, my mother, my sister-in-law and her family – and it was a memorable trip then.

Even more importantly, this was the first temple I wrote about on my blog!

At the time, I had just the usual Kodak camera with me, and I only clicked a couple of pics of the temple as seen from the foothills and a shrine with a buffalo head representing the demon killed by the goddess. My photos were not particularly great, and the post was a short one, giving just some details of the temple, and nothing more. Yet, this post keeps turning up as one of the most read posts on my blog! Even more interestingly, this post has also found its way into the Saptashrungi Page on Wikipedia!

When we visited Nashik last weekend, and Shankar suggested we visit the temple, I was thrilled. It had been almost 5 years since I visited the temple. Much would have changed, and I could write about all the changes! I had a new camera. I could click some good pics of the temple, maybe even the inside, if they allowed it! As it turned out, from the minute we entered the environs of the temple, we could see nothing but fog!!! Standing at the place where the steps began, I could see nothing but the huge crowds and the steps. The mountain was almost completely invisible!!! 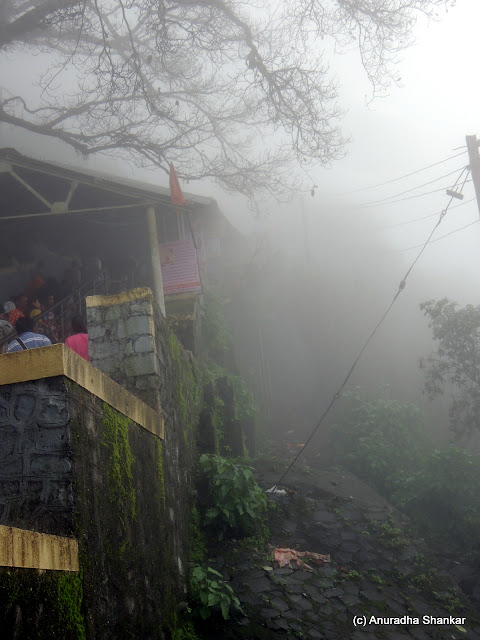 Climbing up the steps, it didn’t get much better. I couldn’t even make out how far we were from the temple! I could just see the next turning, and that was about all!!! The place was packed with pilgrims. It was a holy month, after all! But I couldn’t hear the cacophony that normally accompanies such crowds!! The fog seemed to deaden all the noise! 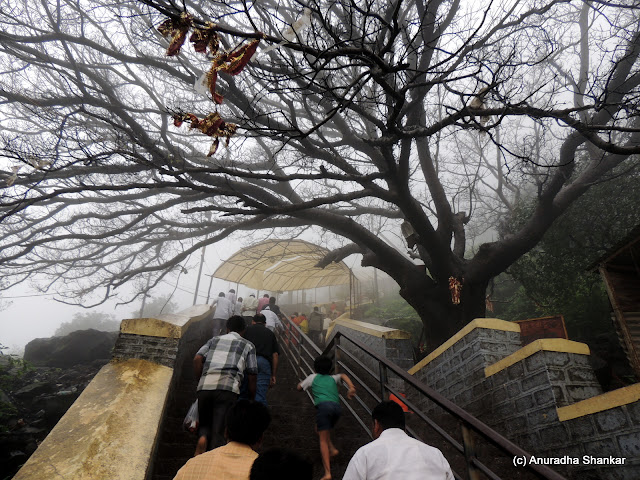 It was only when we reached the last set of stairs that the crowd and noise was apparent... the queue for darshan had spilled on to the steps, and we had no choice but to wait.... 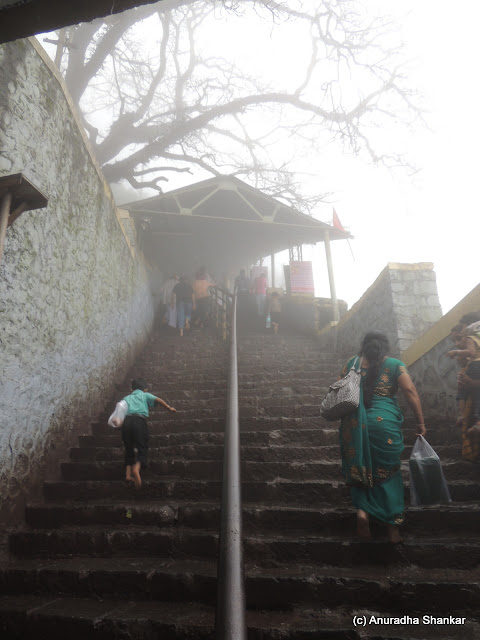 And this is what the view looked like from the top... As Samhith said, it appeared as if we were at the top of the world and the world below had disappeared!!! 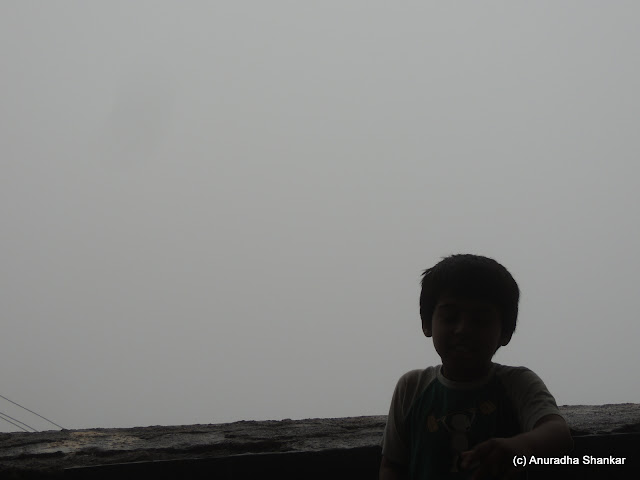 The temple has been renovated and extended within the last 5 years, for there was a lot more space than I remembered. However, the queue was quite orderly, which ensured that we had a wonderful and peaceful communion with the goddess, albeit for a very short time!

One of the biggest changes I noticed is that there is now a separate set of stairs for going down, which wasn’t there earlier. Thanks to this, there is no confusion on the steps at least! Of course, this would have meant a whole lot of work on the hillside, and I have no idea what it looked like, since I couldn't see the hill at all!

Incidentally, there is also a ropeway at the temple... but only for goods, not for people!!!! I saw a board announcing that the ropeway was NOT for people, but thanks to the fog, the ropeway remained invisible too!

The whole village seemed to have transformed too... there is now a temple Bhakta nivas, and also some small hotels and lodges, but sorry, no information. We were in a hurry to get back to nasik before it got dark, and I wasn’t able to go anywhere and get information.

As we made our way down the hillside, the scene appeared blank for quite a while. It was only as we were almost at the foothills that the ground appeared once more... 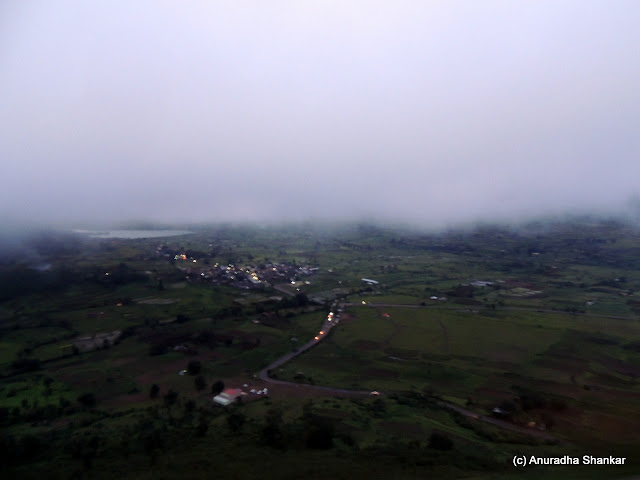 Our trip to Nashik was unplanned and the temple visit even more so! We didn’t hire a car as we had done the last time, but instead chose to rely on public transport – choosing to cram ourselves inside one of the share jeeps on the way up, and managing to catch the last bus on our way down! My hope of photographing the temple remained unfulfilled, and this was certainly not the post I dreamt of writing. Yet, in many ways, this trip was as memorable as my first one... maybe even more so! After all, I might visit the temple again, and even take lots of photos, but the fog – I wonder if I will ever go there and see the same scene again!!