April 02, 2014
It has been months since I have written a book review, and the reason is that I have been so caught up with personal stuff, that I have hardly been able to read anything new, or write reviews of books I have already read. The pile of books on my shelf has been growing, and I am now making an honest effort to catch up with them. Here is the first in the lot I read sometime back, but wasn’t able to write a review of… The Shadow Throne by Aroon Raman. 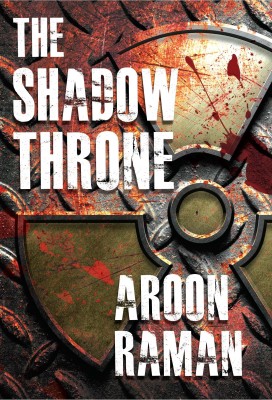 How do I review a book which is eminently readable, but so filled with flaws that make me wonder why I am still reading it? I have read such books before, but rarely have had to write a review. Having accepted a review copy of this one, here are my thoughts….

To begin with, on page 3 of ‘Shadow Throne’, author Aroon Raman writes

“…… his slim, elegantly uniformed figure made diminutive by the monolithic pillar that is one of Delhi’s most famous landmarks – the Qutub Minar.”

This was a book I was looking forward to reading. It was a thriller, a genre I love, and I had taken it along on a trip, as it seemed the perfect book for it. And then, on the very third page, he refers to the Qutub Minar as a monolith, and my hopes came crashing down. As my husband pointed out, not everyone is a heritage enthusiast, and not everyone might know that a monolith is, by definition – A single block of stone, especially shaped into a pillar or a monument, which, the Qutub Minar certainly isn't.  However, I do expect the editors or proof-readers at Pan Macmillan to be aware of such facts, especially so early in the manuscript. All this error served was to put me off, and made me look at the entire book with a sceptical eye.

The plot revolves around a journalist, Chandrashekar, who, trying to solve a murder, gets mixed up in a terrorist plot, is caught between the Indian Intelligence and the ISI, and finds himself in Afghanistan, trying to save the world. Sounds thrilling? Yes, it certainly is. Unfortunately, between all the spy games, the mystery and the adventure, the author forgets to give his story a good backbone.

The whole idea of the story is based on the Kushan Empire, but the research appears to be sketchy at best, and I failed to really get a sense of the back story…

The story itself is so convoluted, with twists and turns, that it reminded me of a Hindi film script, with every character made to look like the villain at some point or the other. While some authors do manage to carry off such twists in the plot, having grown up on Frederick Forsyth and John Le Carre, I guess my expectations are rather high, and this book failed to deliver.

On the positive side, the author has chosen a character he obviously relates to. The grieving Tamil Brahmin journalist, choosing to only work on stories he finds interesting, is eminently believable, as are some of the other characters. The writing is good too, overall, though it needs someone to root out pockets of trouble, like the one I mentioned earlier. Barring such issues, the book is an easy read, and I look forward to more of the author's work.