May 22, 2008
Gokarna- This little place on the Konkan coast is famous for two things- to the religious; it is the great temple of Lord Mahabaleshwara that beckons, while for the hard core tourist, it is the fascinating Om Beach. Whether you are a tourist in search of the perfect beachside holiday, or a pilgrim looking for spiritual bliss, Gokarna is a great place to visit.
The nearest railway station is Gokarna Road, on the Konkan Railway. However, if, like us, you are unable to get tickets, the best option is to get on one of the many buses to Mangalore from Bombay, and alight at Kumta. Our bus left Mumbai around 4:00PM, and we reached Kumta at the unearthly hour of 3:45 AM. There was not a vehicle in sight, and we had to wait till we got a car to take us to Gokarna, about an hour away.
There are a number of lodges and hotels in Gokarna, and it is not difficult to get rooms at reasonable rates. We stayed at the Hotel Shri Sai Ram near the bus stand, which is run by a chap who lives in Bombay. At Rs.250/- per day, the rooms were comfortable.

Before I tell you about the temple, let me tell you the story of the temple……….
Ravana once wanted a lingam from Kailas for his mother, and he undertook severe penance to Lord Shiva. After years of penance, when there was no sign of the Lord, he grew desperate and started cutting off his heads one by one. At last, Shiva appeared, and gave him a lingam, warning him to keep it on the ground only on reaching Lanka. The gods were worried on seeing this, and planned to take the Lingam away from him, and sent Ganesha for the purpose. Meanwhile, it was evening, and Ravana wanted to perform his usual evening puja, and wanted someone to hold the lingam while he did so. At this time, Lord Ganesha came in the form of a young Brahman, and agreed to hold the Lingam for a while. He however said that the lingam was too heavy for him, and would call out thrice to Ravana before keeping it down. Ravana agreed, and went on to do his puja. As soon as he started, Ganesha called out to him thrice, and kept the lingam on the ground. Ravana rushed back, and tried to pull the lingam out of the ground, but it wouldn’t budge. However, it did get twisted, and bent out of shape. In his anger, he hit the young boy on the head so hard, that a depression appeared there, and his legs were pushed inside. Hence, in this place, the idol of Ganesha is a standing one, with extremely (and disproportionately) short legs, and a depression on the head. The Lingam, which is 3 feet tall, is actually under the ground, and is twisted on the top. This is coved by a huge Saligrama stone, supposed to be the largest ever, with a hole on the top, from which one can touch the tip of the lingam. This saligrama stone is lifted up only once in 60 years, when one can see the whole lingam. 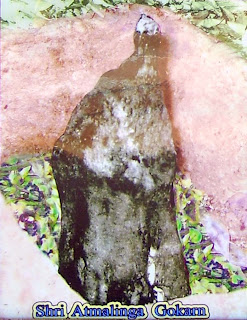 The temple is open from 6:00AM to 12:30 in the morning, and again from 5:00 to 8:30 in the evening. The usual custom is to take a bath in the sea, and then the ritual bath in the Koti Teertha, a pond near the temple, before going to the temple. The pond is extremely clean, and we enjoyed having a bath there. 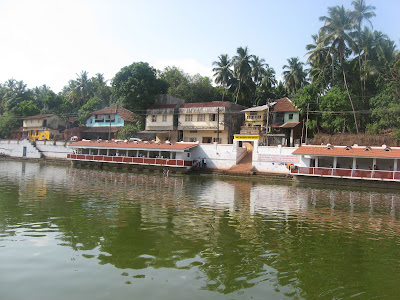 The Bathing place at the Koti Teertha

We started our temple tour with the Mahaganapathy temple, which is right at the entrance of the temple complex, and then to the main temple of Mahabaleshwara, as the Lord is called, because he was stronger even than Ravana. The interesting thing about both these temples is that one can touch the idol and perform Abhishekam by ourselves, which is a rare custom in South Indian Temples, where we are kept at a safe distance from the idol always.

Here, the goddess is Tamra Gauri, who is said to have weighed the merits of Kashi and Gokarna, and found the scales of Gokarna to be heavier.

With us Indians, especially Hindus, appeasing our forefathers and ancestors comes on top of the list, and as in Kashi, it is the custom to perform the rituals at Gokarna. So, the rest of our morning after the temple visit was spent at the house of a priest, performing the rituals and partaking of the food specially prepared. To give them credit, I must mention that they were really conscientious, and did a good job. 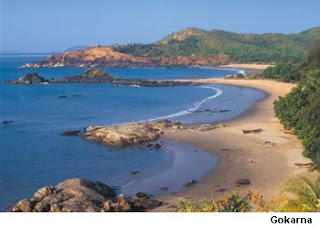 This trip being a pilgrimage with my in-laws, more than a holiday, we did not have time for the beach. We drove along the road to the beach, and the huge waves beckoned to us, and we promised ourselves another trip just for the sea……………
gokarna karnataka mahabaleshwara shivaratri Temples