Allahabad- The Triveni Sangam and other places around it

July 16, 2008
125 Kms from Varanasi is the sacred city of Allahabad where the three greatest rivers of India meet, and continue their journey further. The Ganga weaves her way down from the Himalayas from Gangotri, passing places made sacred by her arrival, like Rishikesh and Haridwar, and passing through the industrial city of Kanpur, before arriving at Allahabad to join her sisters as she makes her way to Kashi. Yamuna also begins her journey in the Himalayas, at Yamunotri, and passes through Mathura and Brindavan, made more sacred by the association of Krishna, and finally arrives at Allahabad where she joins the Ganga to merge her identity with her. Saraswati arrives at Allahabad from god alone knows where, for she is an underground river, who remains unseen to mankind, making her presence felt at certain, extremely special places. She renders the holy Ganga and Yamuna even more pure, more sacred by her association with them at Allahabad. The place where these 3 rivers merge is the Triveni Sangam, a place where thousands and thousands congregate to pay their respects to the rivers and pray for their well being and forgiveness for their sins. 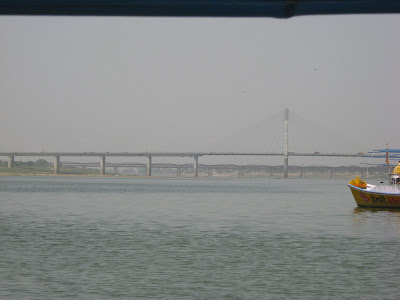 The Many hues of the water at the Triveni Sangam

The three rivers maintain their identity and are visibly different as they merge. While the Yamuna is deep but calm and greenish in colour, the Ganga is shallow, but forceful and clear. The Saraswati remains hidden, but the faithful believe that she makes her presence felt underwater. During the monsoon, when the rivers are in full flow, the confluence of the rivers is seen clearly due to the force of the water, but the same force makes having a dip at the confluence difficult. I was told that during the monsoon, most devotees bathe at the riverbank for safety, while the more ardent ones who are willing to pay for the risk involved go to the confluence in a boat, where a shallow area is created by the presence of a number of boats with a kind of net suspended in between, and bathe there. In May however, there was enough water to bathe, but no too much, so we did not have any trouble in going to the centre of the rivers where they meet in a boat. A sort of platform had been constructed there, from which we climbed down into waist deep water. We had a wonderful time bathing in the river. We could have stayed in the water for ages, if it hadn’t been for the rites and rituals we had to perform back at the mutt where we were staying. It was a wonderful experience and I would advise people to visit Allahabad in March/April when the water will be less and the weather would be pleasant. Of course, it will be quite crowded at that time. May-end is actually a good time to visit if one wants to avoid the crowd and have fun in the water. 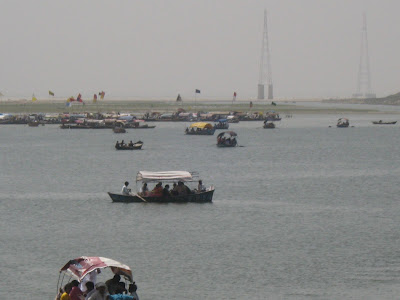 Heading towards the Sangam on a boat

A number of rituals are traditionally performed at Allahabad, mainly for appeasing our ancestors. There are a number of Mutts there who perform the rites. As at Kashi, there is no standard charge, but varies according to the rites one wants to perform and the budget.

An interesting ritual performed at the Sangam is that of Veni Daanam. This is a practice followed by married women for the long life of their husbands. The husband is supposed to comb and plait the wife’s hair and after decorating it with flowers, the end of the plait is cut off and offered to the rivers. Some men even shave off their hair/beard and offer it also to the rivers. This procedure is performed while travelling by boat to the Sangam and the hair is offered along with flowers, etc at the confluence. There is nothing interesting in itself about this. What is interesting is that hair, being light normally floats on water, but at this place, the hair sinks straight to the bottom. Though hundreds of people offer their hair everyday, there is not a single strand of hair seen floating on the river. Of course, there could and will be a scientific explanation for this phenomenon, but whatever it is, it gives us proof that nature is a wonderful thing….. Call it God or simply nature, it is indeed inspiring! 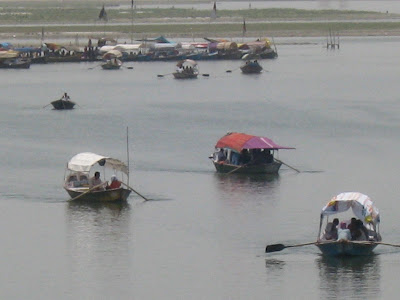 The Platform at the confluence.


The temple of Veni Madhava (one of the trio along with Sethu Madhava and Bindu Madhava, as I have mentioned before) is a little way inside the city. It is a small temple, with a small idol of Vishnu representing Veni Madhava. According to the legend painted on the walls of the temple, there was once a rakshasa who troubled all the Devas. Narada sought an audience with him to find out his weakness, and found that he suffered from a skin infliction. He told the Asura to bathe in the Triveni Sangam at Allahabad, which the Asura proceeded to do. Amazed at finding himself cured, he wanted to possess the 3 great rivers who had cured him, and began drinking them up! When the rivers pleaded with Vishnu, he arrived in the form of Veni Madhava and killed him, restoring the rivers to their rightful place. 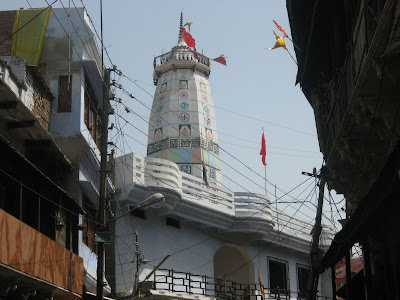 The Shayana Anjaneya temple is an important one right on the banks of the river. Here, the idol of Hanuman is larger than life, carrying Rama and Lakshmana on his shoulders. Only, the idol is lying down. There are many stories about this temple. According to one, hanuman stepped over the rivers without their permission, angering them. They rose up and threw him to the ground, and crushed his ego. According to the locals, every year, the river rises and covers the whole idol before going back, which they consider absolute proof of this story. Another legend mentions that this is where hanuman emerged with Rama and Lakshmana after defeating the king of Patala, the netherworld, Ahi Ravana. Whatever the story, the temple is a simple and nice one.

The Adi Shankara Vimana Mandapam, a temple built by the Kanchi Mutt is right next to this temple. This is a 3 storeyed temple with idols and sculptures of various Gods and Goddesses. It is worth a visit.

The other paces of interest in Allahabad are-

The Allahabad fort, on the banks of the Yamuna, where we take a boat to go to the Sangam.

75 Kms from Allahabad is Sita Madhi, or Sita Samahit Sthal, where Sita is believed to have merged with mother earth. This place has recently been developed by the UP Tourism Dept, and made into a tourist spot. There is nothing remotely religious about it now, but children seem to enjoy the attractions of the place which are a huge statue of Hanuman with an artificial cave under it, a Shiva lingam inside a cave, and the Sita temple flanked by a river on all sides, and a statue depicting Sita entering the ground. 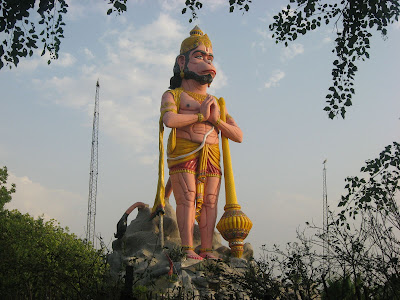 A Statue of Hanuman and 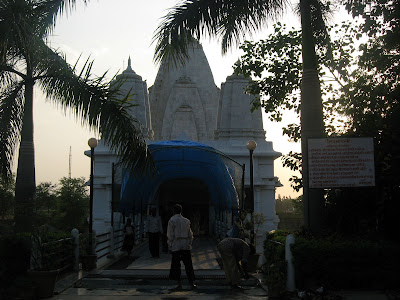 The Sita Temple at Sita Madhi


75 Kms from here is Vindhyachal, where the temple of Vindhyavasini is one among the Shaktipeethas. We were unable to visit this temple too.

I would advise my readers to start early in the morning and visit Allahabad first. It is possible to have a dip in the river and visit all the temples, fort and other places by afternoon, if one does not have to perform all the rituals there. On the return journey, visit Sita Madhi and Vindhyachal, both of which are on the same route.
Allahabad Blogsherpa India Kashi Temples Triveni Sangam Uttar Pradesh varanasi