Gaya Part I - The Akshaya Vatam and the Vishnu Padam

July 17, 2008
Gaya is a holy place revered by Hindus and Buddhists alike. While to Hindus, it is the footprint of Vishnu (the Vishnu Padam), the Akshaya Vatam and the chance of performing the Vedic rites not just for 3 generations of ancestors, but anyone and everyone that attracts them to Gaya, for Buddhists it is the sacred Banyan tree under which the Buddha attained enlightenment. Indeed the regular influx of Buddhists from all over the world has made Bodh Gaya a tourist spot in Bihar, and a tourist attraction with all kind of facilities, something like an oasis in the heart of a desert!
At the outset, I must mention that I will be giving only information and relevant details in this article. I will not be able to describe the places in detail, as I usually do, because this is one trip I wasn’t able to make. It is a belief in our community that those whose parents are alive shouldn’t visit the Vishnu Padam or the Akshaya Vatam, and my in-laws, who believe in these rules very strongly, went alone to Gaya to perform the rites, leaving us at Kashi. Hence, I have the details that I am now sharing with all of you. For a more detailed article, you will have to wait till I visit these places myself. Meanwhile read on and make a list of the places to visit, and let’s hope we all get to visit Gaya sometime.

Gaya is all about legends, and there are legends connected to every temple there and every rite that is performed.

The Vishnu Padam and the Legend of Gayasuran 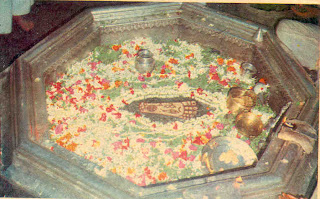 The Vishnu Padam at Gaya
Let me start with the name of the place. 'Gaya'. According to the legend, there was once an Asura named Gayasuran, who was a great devotee of Vishnu. When the Devas couldn’t bear the trouble he caused any more, they went to Vishnu and asked for a way out. Vishnu approached Gayasuran and told him that He wanted to perform a special yagna, and wanted a special place to perform it. Gayasuran offered his heart, and Vishnu accepted. The yagna began, and soon, the fumes and the heat became unbearable, and Gayasuran started succumbing to it. Vishnu asked him for his final wish, and Gayasuran asked that the place he died would be immortalized by his name, and hence the name ‘Gaya’. Second, he asked that people should be allowed to perform the sacred rites (Pinda pradaanam) not only for their ancestors, but for anyone- family, distant relatives, friends and foes, non-Hindus, pets, unclaimed bodies- in short, for any dead human/creature they could think of. This remains the only place where Pinda pradaanam is carried out in this manner. In fact, I am told that in a normal Shrardham, 3 pindams are made (one for each generation which ahs passed on); in a Teertha Shrardham , as at Kashi, Allahabad, Rameswaram, etc., 16 pindams are offered, including all ancestors on both parents side; in the Gaya Shrardham, 64 pindams are offered, of which 32 are for the mother alone, since she carries her child for 9 whole months within her body, 16 for the ancestors, and 16 for all others as I have mentioned earlier. Of course, all this is a matter of faith and belief, but what is there in life if we don’t have faith? Anyway, once Vishnu granted his wishes, he stepped on him with his foot, leaving a footprint at this holy place, and granting liberation to Gayasuran. It is this footprint which is worshipped as the Vishnu Padam. For the information of devotees, I must mention that for a fee of Rs.50/- an imprint of the Padam is taken on a muslin cloth and given. This is to be kept in the Puja room and is considered very auspicious.

Falguni River and the Legend of Sita 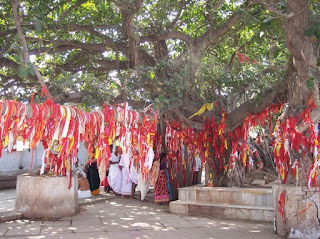 The Akshaya Vatam
The next legend concerns the Falguni (or Falgu) river. There is never much water in the river at Gaya, though apparently, there is water upstream as well as downstream. It is clear that there is water under the ground, because, even as one digs into the ground with ones fingers, water appears. This is apparently because of a curse on the river. The story goes that Rama, along with his brothers and Sita, came to Gaya to perform the sacred rites for his father, Dasaratha. When the brothers were bathing in the river, Sita was sitting on the banks, playing with the sand. Suddenly, Dasaratha appeared out of the sand, and asked for the Pindam, saying he was hungry. Sita asked him to wait till his sons returned, so that she could give him the traditional Pindam of rice and til. He refused to wait, asking her to give him pindams made of the sand in her hand. Having no other option, she gave him the Pindam he desired with five witnesses – the Akshaya Vatam, the Falguni River, a cow, a Tulsi plant and a Brahmin. Soon, Rama returned and started the rituals. In those days apparently, the ancestors would arrive in person to collect their share, and when Dasaratha did not appear, they wondered why. Sita then told them what had happened, but Rama could not believe that his father would accept pindams made of sand. Sita now mentioned her witnesses, and asked them to tell Rama the truth. Among the five, only the Akshaya Vatam took her side and told the truth, while the others lied, trying to take Rama’s side. In her anger, Sita cursed all of them thus: the Falguni river henceforth would have no water at Gaya; the Cow would no longer be worshipped from the front as all others are- only its backside would be worshipped; there would be no more Tulsi plants at Gaya and the Gaya Brahmins would never be satisfied, they would always be hungry and crave more and more. She then blessed the Akshaya Vatam saying that all who came to Gaya would perform the Pinda pradaanam at the Akshaya Vatam too.

Other temples in the vicinity are the Sakshi Gopal temple and the Mangala Gowri Temple, which is among the Shakti peethams.
Akshaya Vat Gaya Vishnu Padam