An occasion to celebrate

April 27, 2011
Last week when I returned from Delhi, the foremost thing on my mind was to update my blog. There are reams of things I want to write, but I found myself unable to write anything at all. The only thing I wanted to share was about the function I attended at Delhi, but then again, it wasn’t easy, since I haven’t really written much about my family. So, after a lot of thinking, here I go….
To give you people a brief background, I grew up with my mom’s side of the family, since my dad passed on when I was five. I have 3 mamas (maternal uncles) and one chitti (maternal aunt). The use of the traditional Tamil names is simply because each one of them has an important place in my heart, and to call them by the universally used name of uncle/aunt somehow doesn’t ever fit.
My mom’s family was originally from Salem district in Tamilnadu, but over the last few generations, wandered from Salem to Mysore, Bangalore, and finally found their way to Delhi. Today, the family’s branches are spread all over the world – everywhere except where the roots once were firmly entrenched. I also have a host of other mamas, chittis and periammas – my mom’s cousins. They grew up together in Bangalore, shared the same house, were brought up by a bunch of energetic and intelligent women (nearly all of them widows), and grew to be extremely close to each other. Today, the families have grown so large, so even if just my mom, her siblings, her cousins, and their families get together, there will be about 500 people involved! So, this is the family I got to catch up with, last week in Delhi. Well, not the whole lot of course, but at least some of them. 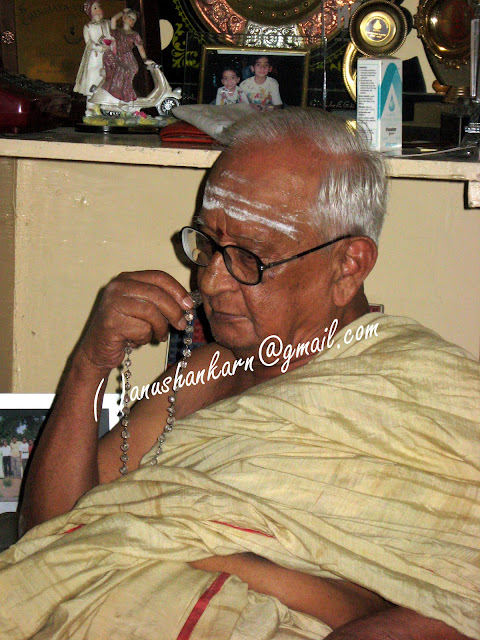 The oldest male member of the family is presently Tatha – my grandfather. He became a great-grandfather when Samhith was born, and then once again when my cousin had his daughter, but remember, we are a patriarchal family, so we could officially celebrate only when his son’s son had a son. That happy occasion arrived about 6 months ago when my oldest cousin had a son. It called for celebrations, of course, and since my grandfather is in no condition to travel, we all travelled to meet him. Having four generations of males in the family is no laughing matter, and getting them all together is certainly not! The fact that so many of us could get together was in itself a blessing and reason to cheer! 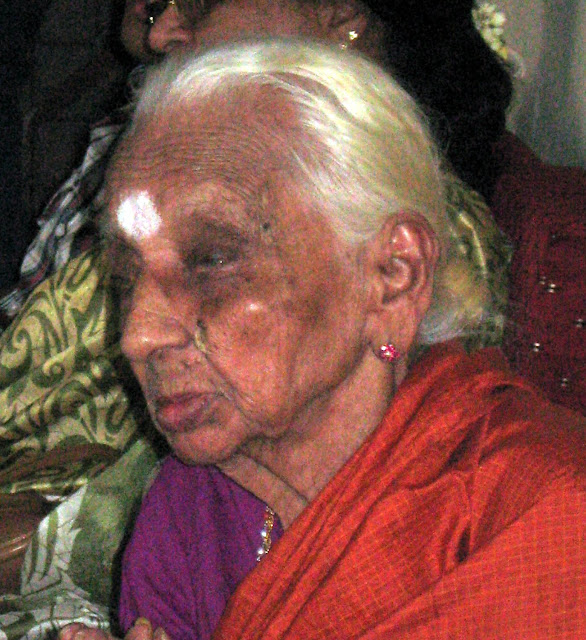 While tatha is now 92, he is by no means the oldest member of the family. His sister, my great-aunt, is now 97 and going strong! She made the journey all the way from Bangalore to bless her brother, to whom she is extremely attached. While she is my great-aunt, I call her ‘athai’ (aunt), but in fact, she is the grandmother I never had. My mom’s mom passed away when her kids were very young, and while we have heard lots about her, none of us had the good fortune to see or know her. We never missed her, though, because athai was always there, leaving her own kids (who were older) alone, to take care of her brother’s children. Samhith calls my grandfather ‘kollu-tatha (great grandfather) and my great-aunt ‘Kollu-patti’ (great grandmother), and doesn’t believe that they are brother and sister. “No amma, they must be married to each other. How else can they be grandparents?” he says!!
I spent 4 days in Delhi, and for the first time, insisted that I wouldn’t simply sit at home chatting away as usual. I had promised to show Samhith at least a couple of the World Heritage sites in Delhi, and I just HAD to take him. Thankfully, my cousins chipped in, and Arun dutifully chauffeured me to as many places as he could, making time for me in between his duties of picking up people from the station/airport and ferrying stuff between the house and the venue. And when he was too busy to drive me around, he even encouraged me to try out the Metro on my own, which led to the best part of our entire trip! No wonder he is Samhith’s favourite mama for now!
There were so many wonderful moments – but the ones I relished most were those between the great-grandchildren of the family. I was thrilled to see Samhith try to play with the baby, and we were all amused when he insisted that since it was a boy, he was sure to love cricket, and so talked to him all the time about the game. Never mind that the child in question is just 6 months old, and at the moment, interested only in crawling around and grabbing what he could to put in his mouth! On the other hand, it was not so thrilling to see that Samhith has inherited the exact genes from every side of the family which encourage him to tease every kid in sight. The poor thing who was at the receiving end turned out to be the other great-grandchild – Sahana. She reminded me of all the times I turned up crying because one of my mamas had teased me about something or the other, but times certainly have changed, and the girl certainly has a lot of grit, because she teased him right back! Now you can imagine the kind of chaos which prevailed in the house – perfect atmosphere for a family gathering, wouldn’t you say? While there were times when I was irritated and lost my temper, I also realized that these were the moments I would treasure, and remember years later, which is one of the reasons I am writing this post in the first place.
The ceremony we performed for tatha is called ‘Kanakabhishekam’. The word is in the Sanskrit language, and means ‘shower of gold’, and that is exactly what we did. The ceremonies began two days before the actual date, with a prayer to our ancestors. We first performed a ‘Sumangali Prarthanai’, which is a prayer to the women of the family who have departed as sumangalis (which means that they died when their husbands were alive).  Blessings of such women are considered especially sacred, and this ceremony is performed before the commencement of important ceremonies. The next day, we performed a puja to the family deity, and finally we arrived at the main ceremony itself. 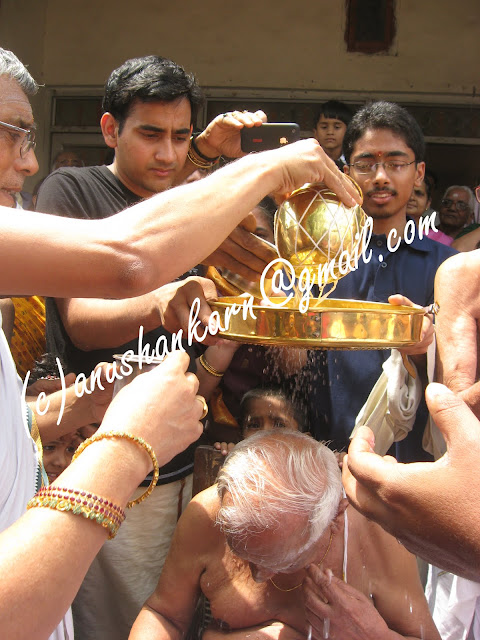 The day began with prayers and homams (fire sacrifice) to Lord Ganesha followed by a navagraha homam (to the nine planets). The central point of these prayers was a brass urn filled with water from the seven sacred rivers of India. It is believed that the water imbibes all the vedic mantras recited. Once all the prayers were completed, a sieve was filled with gold coins, and held over my grandfather, while the priests poured the holy water from the urn over the sieve, so that water flowed over all the gold coins before falling on his head. Thus, he is believed to have benefited by the twin results of the prayers as well as the gold, which is held sacred. This was the most important part of the ceremony, and we all participated, each of us helping by pouring a little water over him. The ceremony culminated with each one of us bowing down before him, asking his blessings. We were blessed indeed, for being able to attend such an interesting and rare ceremony.
It was a memorable trip, and I am thankful that I didn’t miss such a wonderful occasion. Here are some glimpses…… To see the complete album, click here. 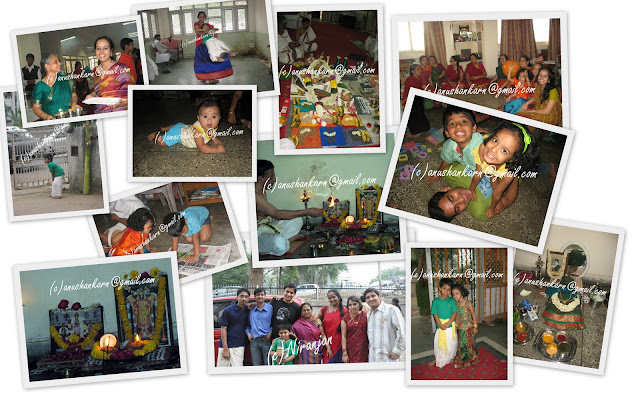