June 17, 2012
After a troubled and tension-packed week, Saturday came along at just the right time to brighten things up. Technically, the day began on a cloudy note.. with the rain gods deciding to bring in the monsoon on just the day I had decided to bring out one of my sarees hidden away in the corner of my cupboard! So, in went the saree again and out came the well used Jeans, kurti and shoes.... the best attire for hunting down an auto amidst the downpour. And, will you believe it? The moment I caught an auto driver ready to take me to my destination, the rain stopped!! Well, it was too late to do anything about it then, and off we headed to our lunch date. Yes, "we" - Samhith and me,  were off to the Trident at the Bandra Kurla Complex (BKC) to join my Lavasa friends for a book reading followed by lunch at the Italian restaurant, Botticino, at the Trident. Samhith wasn't really invited, but I couldn't leave him behind, and so I took him along, wondering how he would behave, and apprehensive of the kind of antics he could get up to, in a place like the Trident! 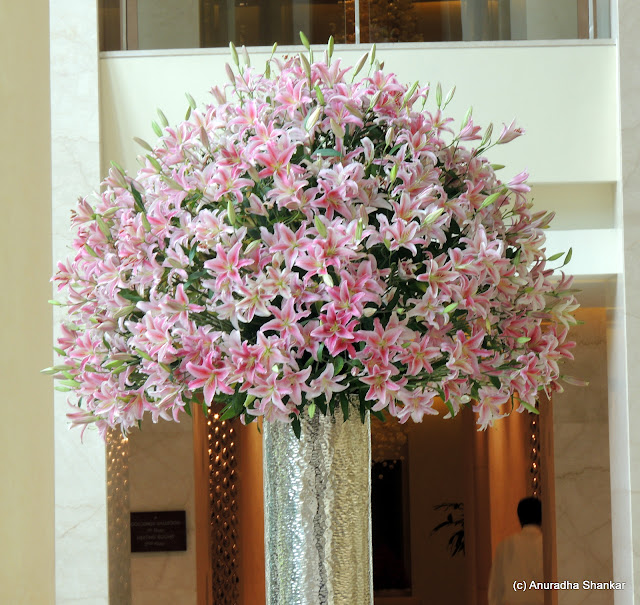 As my husband keeps pointing out, I have a thing about punctuality... a horror of being late... which makes me start from home so well in advance, that I invariably reach early! As it turned out, I wasn't early, but I was still the first guest to arrive! So that means I had a bit of extra time to roam around and see the place before the others turned up. And also a bit more time to chat up with Biswajit Dey, to whom should go the credit for arranging this memorable Blogger meet, Anushka and Kainaz from the Trident, and Arti Sarin and Sitanshi Talati, from Verve - co-organizers of the event.

The others soon arrived... Pushpa Moorjani, who has been instrumental in getting us all to meet, Nisha Jha, who has been globe trotting, and then our new authors - Shakti Salgaokar and Kiran Manral. The only missing faces from the original Lavasa group were Ramya and Monika. Both were sorely missed and we all hoped we could all get together again and re-live the wonderful time we had at Lavasa last year!

The bloggers meet had been co-hosted by Verve with the Trident, and Kiran was to read from her book, "The Reluctant Detective". Having already read the book, and enjoyed it immensely, it was an interesting experience to hear portions of the book read out by the author herself!!

Following the book reading, it was time for lunch... 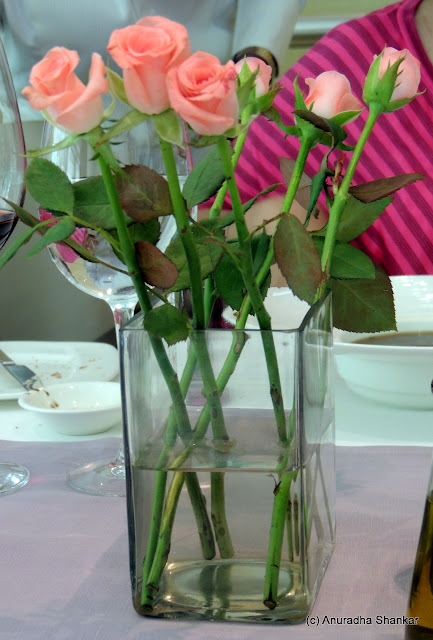 Sitanshi and yours truly were the only vegetarians in the group, and since I am not really a foodie, I was wondering what I would eat! But I really needn't have worried! We were served a beautiful mango delight to start with.... 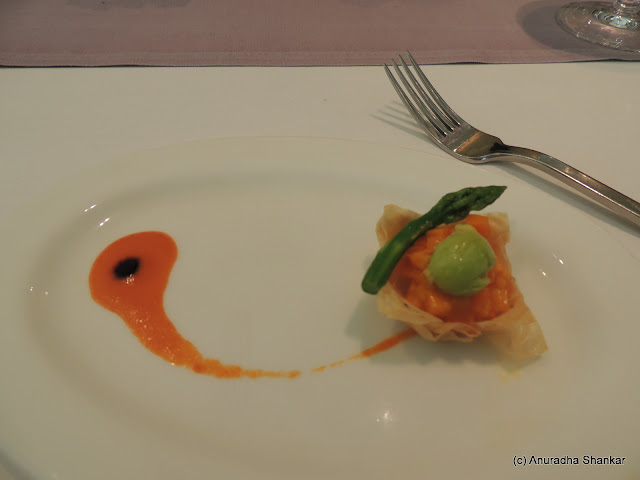 Samhith, who till then had been roaming around with Biswajit, turned up to see what was on amma's plate. While he refused to try it from mine since he said the 'chef uncle' was getting him his own plate, he gave it the highest of compliments - "It looks like the dishes from Masterchef Australia! The chef should participate in Masterchef India" and off he went to praise the chef.... going straight into the kitchen to do so!

This was followed by a Pear and Pecorino Salad with arugula and balsamic dressing.... 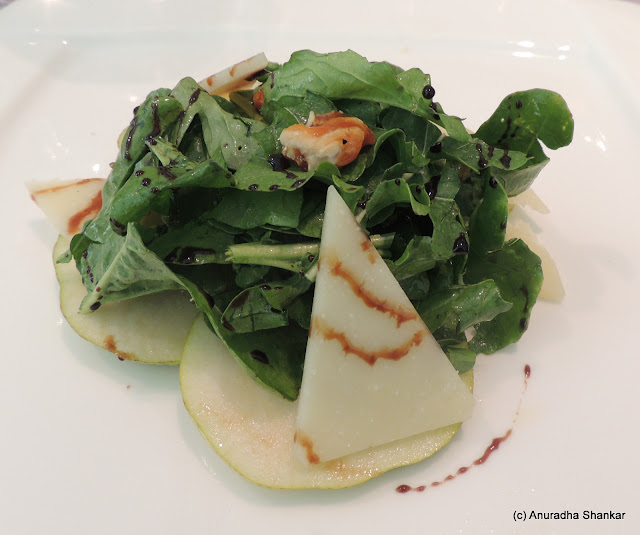 I had no idea what the ingredients were, apart from the pear, but it tasted wonderful!!!

Salad was followed by the main course, which for me was Spinach Ricotta Crepes with bell pepper reduction and  parmesan cheese...

(So sorry but I have no photograph to show you this beautiful dish, because I seem to have either forgotten to click a pic in my hurry to eat it up, or else the photo mysteriously got deleted while I was uploading the others! )

This was probably the most beautiful as well as tasty dish I have had in a long, long time.... and is one item I think I will definitely come back for, with Shankar, of course!

Samhith meanwhile, had a special dish.... Penne in white sauce, which he ate at the table with the 'boys'!!

We finally wound up the lunch with Tiramisu and Berry sorbet..... Samhith loved the Tiramisu, but I absolutely adored the sorbet! 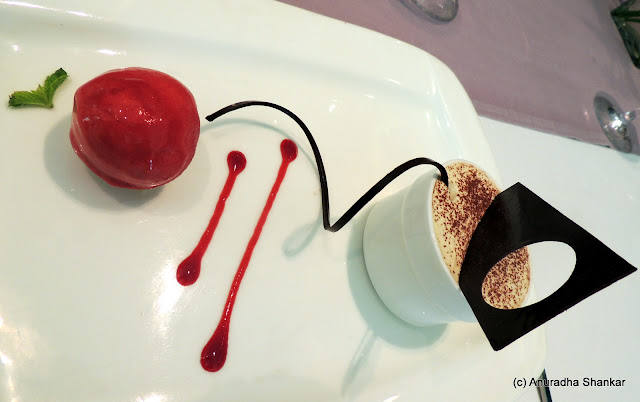 It was only then that we realised that it was time to leave...... We had spent almost 4 hours together, and had no idea how the time had flown! Thats what happens when you are in great company, right?

Coming back to Samhith, it is only when I got home and looked at my camera that I realised what he had been up to....

First, he had taken hold of my camera and had been clicking anything he could see.... 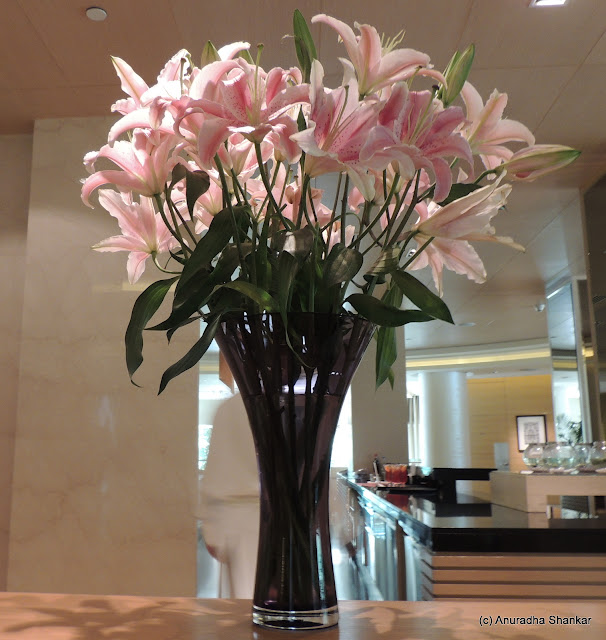 Next, he had ventured into the kitchen, and captured some 'behind the scenes' stuff.... 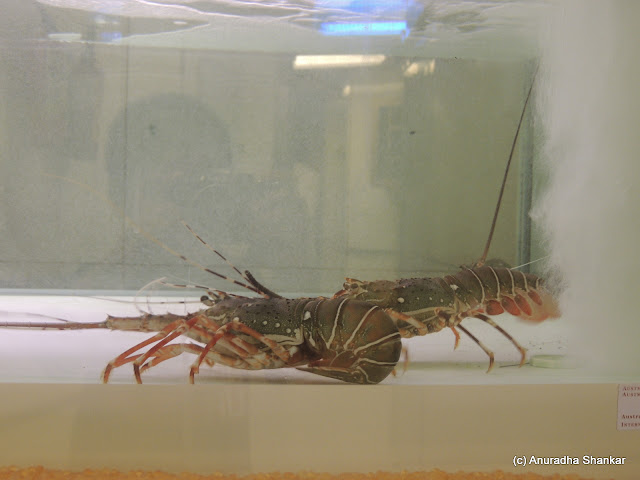 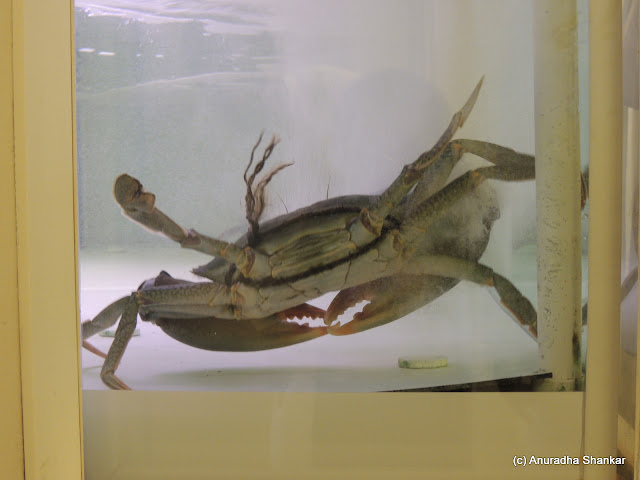 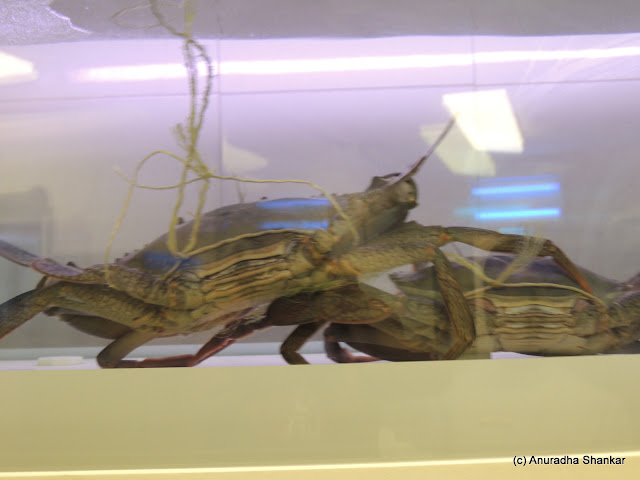 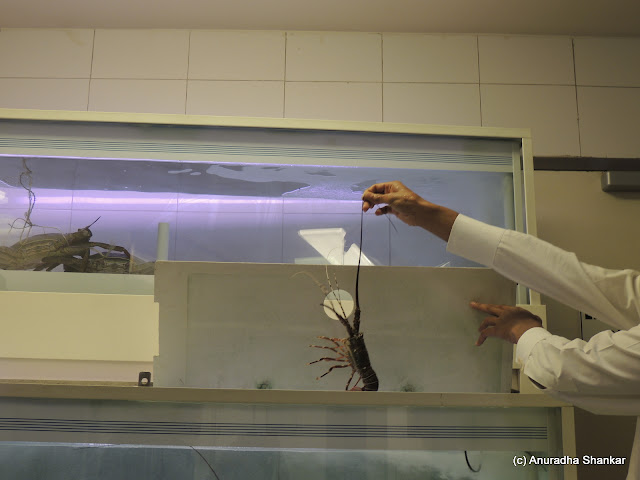 yes of course, behind the scenes stuff that HE was interested in! What else do you expect of a 9 year old?

and finally, he had made friends with the chef, Vikas Vichare !!! As this photo taken by Biswajit shows....

And as we said our final goodbyes, found yet another thing to capture his interest... and ours!!! 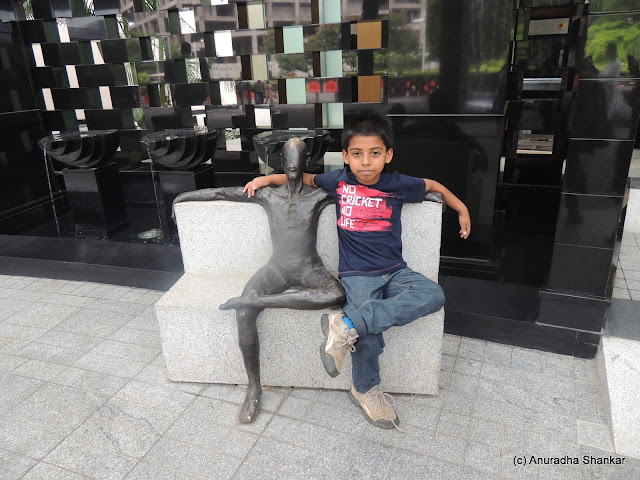 We returned home sated and filled with wonderful food, but the day wasnt over, for we went out again.... this time just mom and son... to see Ferrari ki Sawari.... and what a ride that was!!!!

I have watched such a simple and nice movie after such a long time...... and as we were discussing over lunch, the kind of movies made these days arent really conducive for kids, but how do we keep them away???? A movie like this comes as a breath of refreshing air... something that even Samhith understands is much better than the movies he usually pesters me to take him to!

And that brings us to the end of the day..... and this post! Hope there are many more such fun filled days in store for us!