It’s been a while since I wrote about my Sewri Walk with the Travel-Logs. My short trip to Coorg and all the unfinished work I found when I got back, resulted in the blog being neglected for quite a while. My son’s holidays begin next week, which implies that I will have even less time for the blog, so here is the next part in the Storming Sewri Series –

Flamingoes and the Fort – these were the two things I could count among the things I knew about Sewri. It was only when I ventured with our informative guides further inland, towards the heart of Sewri, that I realised just how little I knew about my city. Our first stop was at the Sewri Christian Cemetery. 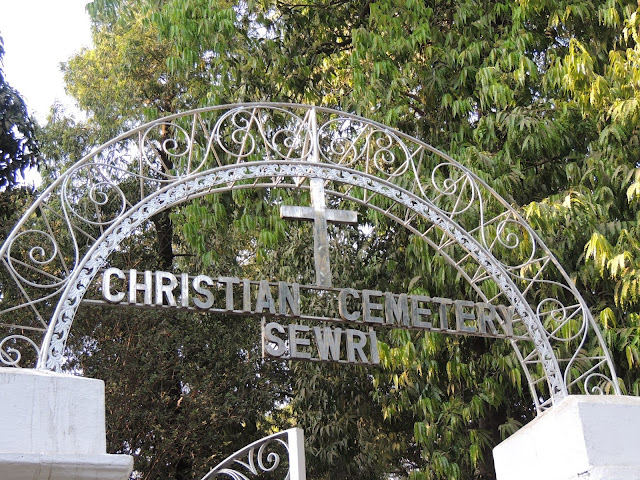 I have only been inside one cemetery in my life – the Banganga Goswami Cemetery, where Shankar’s great-grandfather, who took Sanyas (renounced the world), is buried. You can read the post I wrote about it here. The Sewri cemetery was the first Christian cemetery I was visiting, and frankly speaking, I was completely overwhelmed!

I wish I could show you the cemetery as it is....unfortunately, photography isn’t allowed, so I just have to describe it as well as I can.... Close your eyes then, and think of a simple, unpretentious gate. At first glance, it looks like a garden. It was, after all, a garden at one time – belonging to the Horticultural Society, and converted into a cemetery following the plague epidemic in the late 19th century.

A path runs through the land, dividing people, even in death. One side is for the Catholics, the other for Protestants. The division doesn’t end there. Rich and poor alike might all turn to dust at the end of the day, but status and wealth does seem to linger on, seen in the tombstones and the space chosen for the resting places. Amidst the intricately carved tombstones lie nameless ones, simply marked. Family vaults tell us of generations who lived and died here, while angels atop tiny graves mark the place where children rest, having seen too little of life.

Amidst the unknown and faceless are people whose names live long beyond their life spans. Here lies Frederick William Stevens, architect of the Victoria Terminus (now Chhatrapati Shivaji Terminus). His grave is simple, and it is only by blowing away the dust that we can read his name. In a farther corner is George Wittet, the architect of the Gateway of India. Also here is Joseph Baptista, who was the Mayor of Mumbai in 1925, but who, more interestingly, was the lawyer who defended Veer Savarakar. He was also a labour leader who took up the case of the mill workers. In such august company are also recent personages, such as Francis Newton Souza, the artist, and Dom Moraes.

Walking through a cemetery is something that, not unnaturally, brings up thoughts of death. Being a Hindu, I am so much more comfortable with the idea of turning into ashes, and reuniting with the elements, my name etched in memories, rather than on stones. However, there is no escaping the fact that tombstones do serve a purpose – as milestones in the path of history.

Coming up: The final part on the Storming Sewri series.