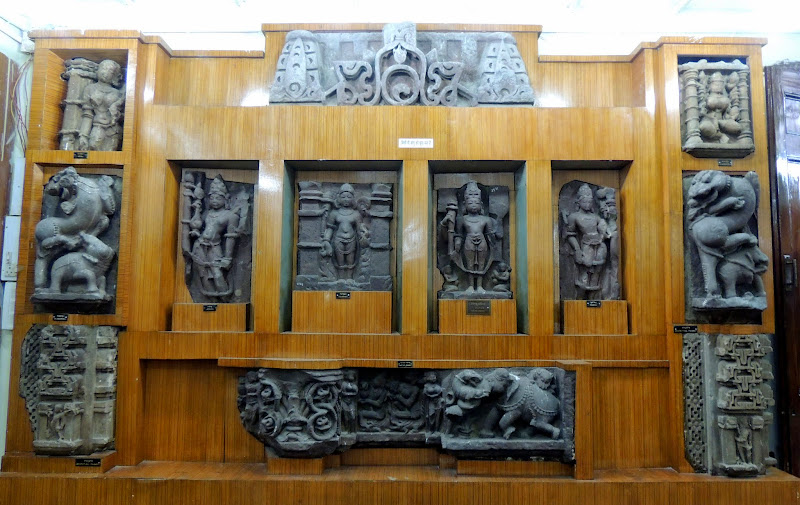 “Sangrahalaya? Woh kya hota hai?” (“Museum, whats that?”) asked a bewildered gentleman, when I asked him directions to the museum at Raipur.


By now, we had gotten quite used to the refrain -  “Aapko ghoomna hai, toh Sirpur Jaiye, Bilaspur Jaiye, yahan toh kuch bhi nahin hai” - “If you want to go see something, go to Sirpur or Bilaspur. There is nothing here in Raipur. ” It was with great perseverance that our fellow journalists, Aruna and Susheela, with years of experience behind them, had drawn out of an exasperated receptionist at the hotel that there was indeed a museum at Raipur. Me and Sid had happily tagged along, eager to see at least something of Raipur before we headed to Sirpur for the Music and Dance Festival for which we had been invited. A local share auto had brought us to Ghadi Chowk, the central area of Raipur marked by a clock tower. Our share auto driver, unable to get us to pay anything more than the usual fare, had grumpily moved away, leaving us to figure out the location of the museum ourselves. Our questions had begun collecting a crowd of locals, wondering what on earth we tourists wanted to see in their town. Eventually, it was another auto driver who came to our aid, pointing out the museum, which was just down the road. After that experience, our hopes, I must admit were rather dimmed. The museum therefore, came as a big surprise. To begin with, it was huge, surrounded by lawns and gardens, with an art gallery in one corner, and sculptures all over the place!

The museum was set up Raja Mahant Ghasidas, the ruler of Rajnandgaon, in 1875. This was soon after Lord Cunningham of the Indian Archaeological Service discovered the ruins of Sirpur, and other sites in the region in 1872, and thus served as the perfect place to display the exhibits discovered. The museum has an astounding collection of sculptures, pottery, as well as etchings in stone and metal.

The pottery section was interesting. It showed evidence of trade with Rome as well as other civilizations, and the stone edicts pointed to a recorded history we see little of. However, to be honest, the sculptures were what I enjoyed the most. I have already written about the first sculpture (or rather a replica) I saw there, of Rudra Shiva. Here then, are some more really interesting pieces from the museum…. 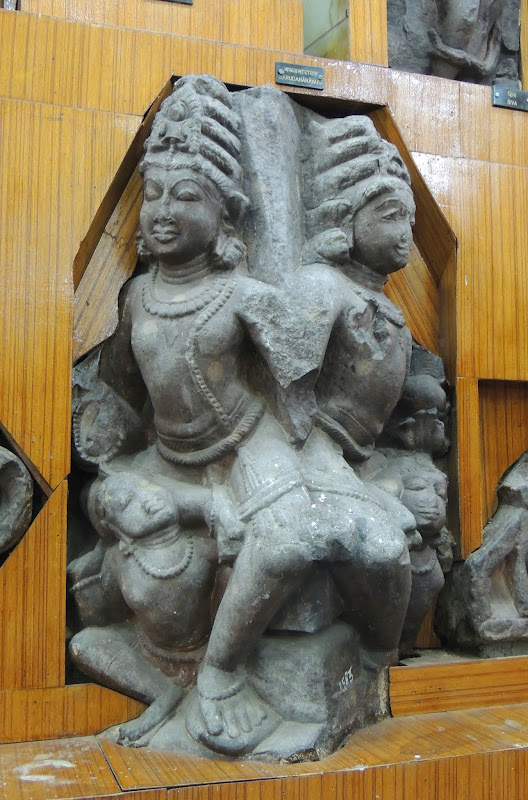 This seems to be a pillar, but very interesting are the figures of Vishnu on Garuda on each face. Made from a single piece of stone, can you imagine how impressive it would have looked, in the temple it originally stood in? 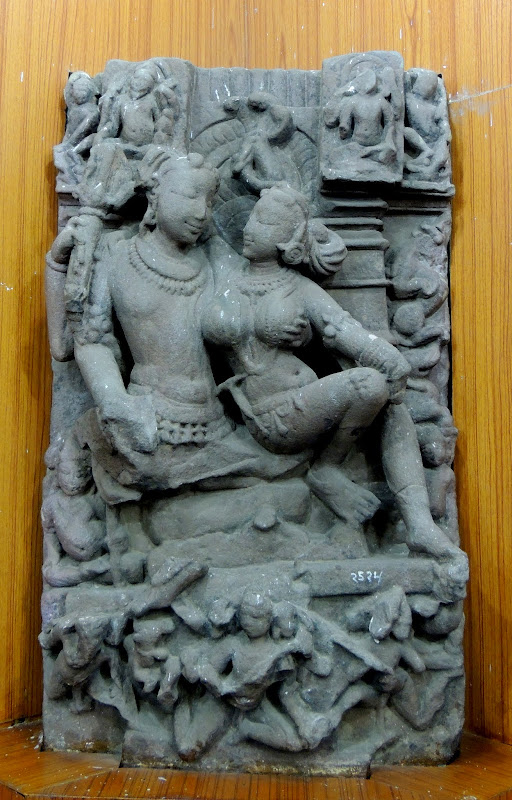 This one was titled ‘Uma Maheshwara, 10th Century, Karitalai, Jabalpur’. While I loved the expression of total love on Shiva and Parvati’s faces, more interesting were the figures below… Ravana, lifting Kailash, and on either side, Ganesha and Karthikeya! This is so like the sculptures I have seen in Ellora and Southern India!

Which brings me to the next one, of Karthikeya… 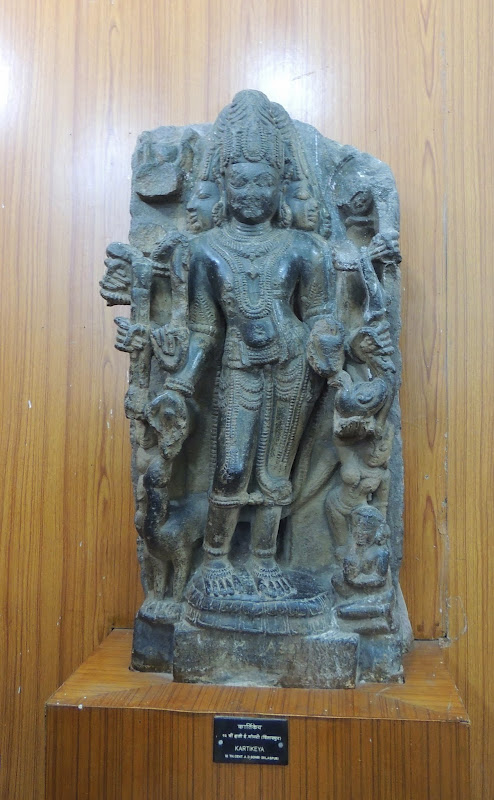 Note the six faces, the peacock vehicle, and the cock near his hand. Then, look down and see the woman kneeling by his left. Those of you from Tamilnadu will recognize her as ‘Avvayyar’, one of the most ardent devotees of Karthikeya, far down south, well removed from Chhattisgarh! An interesting discovery dating back to the 10th century from Gomri near Bilaspur!

And then there is this… 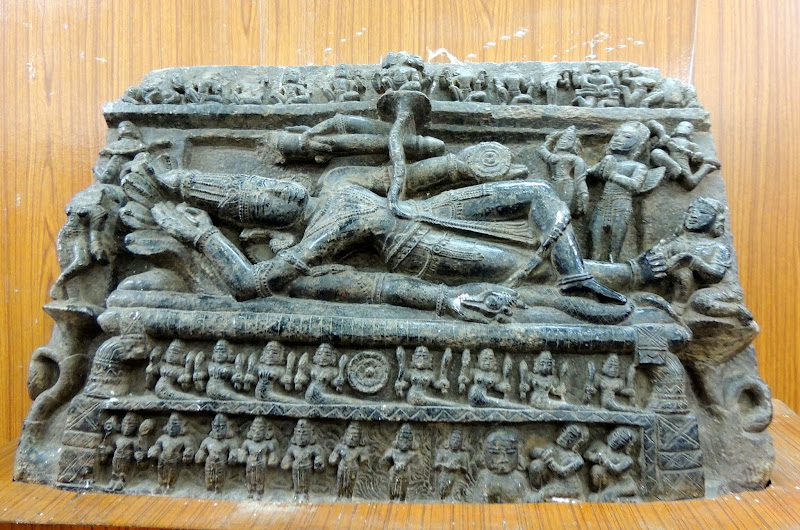 Sheshasayee Vishnu, reclining on a serpent, Brahma sitting on a lotus emanating from the navel, Lakshmi by his feet, sages and Garuda gathered around. Now take a second look. Above him are twelve figures, 10 of which depict the Dashavatar (the ten avatars of Lord Vishnu) and two depicting devotees. Below him are even more figures. The layer just below him shows Naga Kanyas, women from the world of serpents, the wives of Adishesha, on whom the Lord rests. On the lowest layer are depicted the Navagrahas – the nine planets. Again, I have seen similar depictions more often in the south!

In the same series, here is another sculpture of Vishnu, holding a chakra. The conch seems to have broken, but the rest of the sculpture is in great condition. 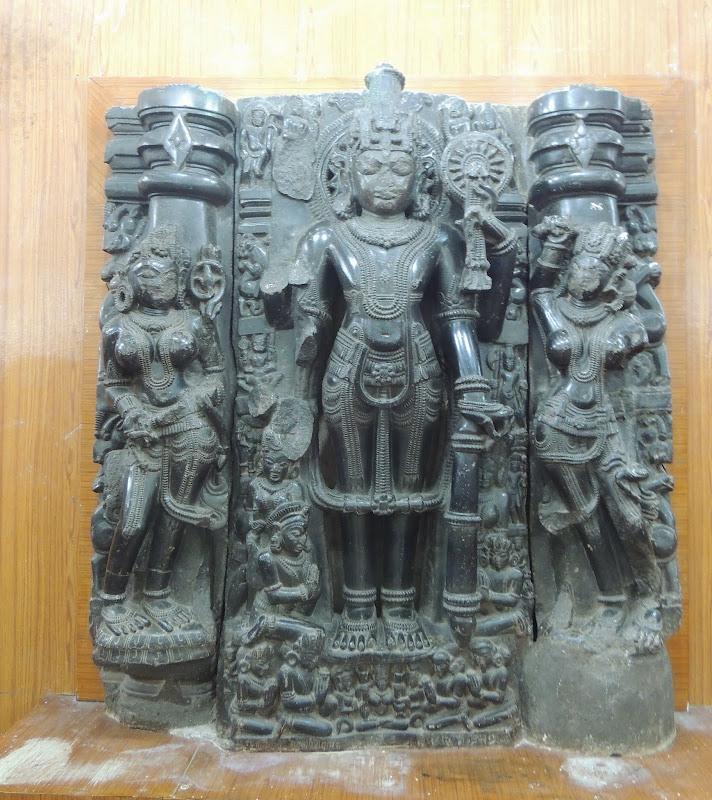 Ready to move on? Wait. take a second look. Can you see the Dashavatar hidden in  this sculpture? We couldn’t, till they were pointed out to us! Let me help you out… 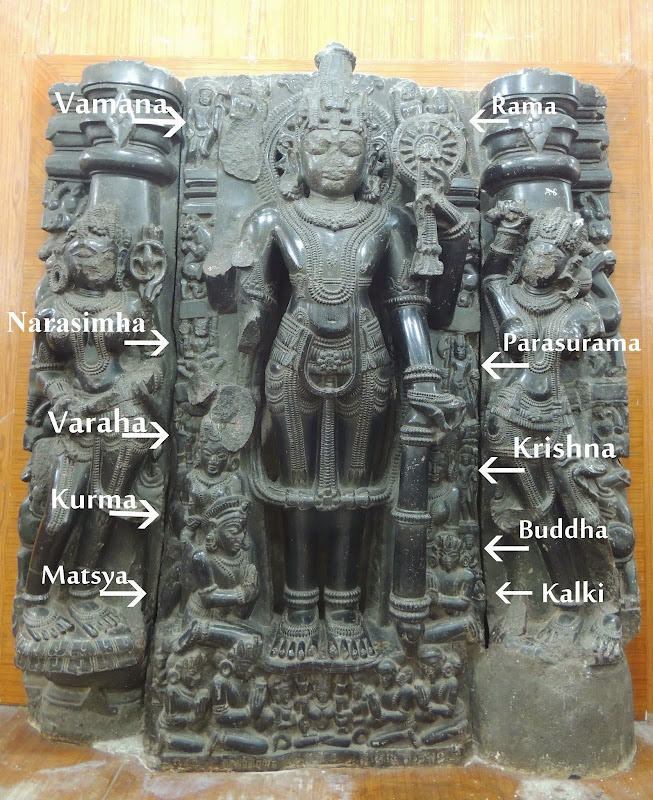 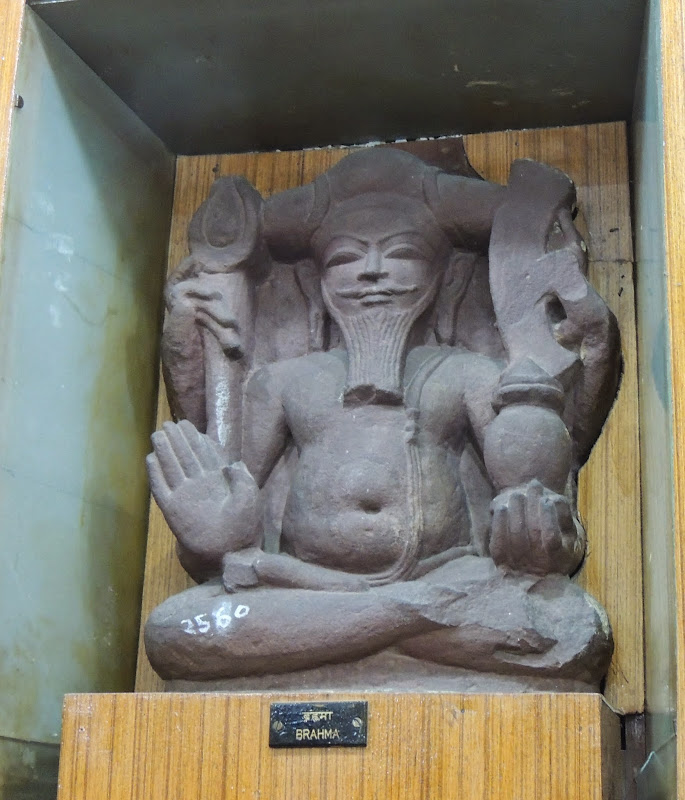 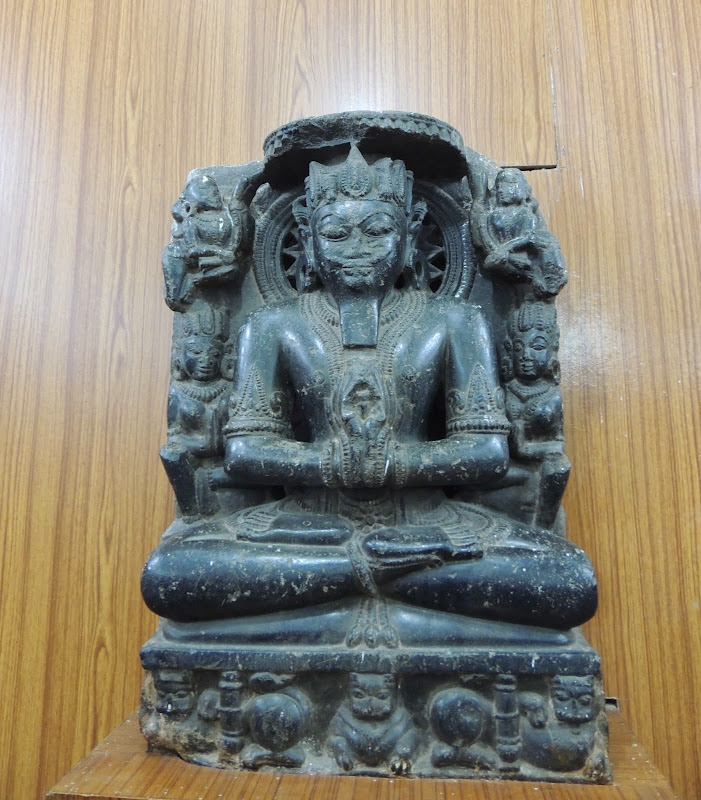 I found their depiction really interesting…. The beards, their headgear! What do you think?

The museum also has an enthusiastic woman in charge, who guided us through the museum, and pointed out interesting details we had missed. After all the trouble we had finding the museum, it was a relief to see that there still were people like her, so immersed in history and heritage. Sid had a long conversation with her while we immersed ourselves in the sculptures, and you can read all about her here.

The museum can easily take up two to three hours, so if you are visiting Raipur, take time off and go see this museum and its incredible artifacts!


I visited Raipur en route to Sirpur to attend the Sirpur Music and Dance Festival on invitation from the Chhattisgarh Tourism Board.