May 25, 2017
Summer is when I travel. This year, our #Summertrip was shorter than usual, and now, back in sweltering Mumbai, my thoughts are still in the gorgeous wilderness of Kanha National Park, where the sun’s heat didn’t bother us. Indeed, on our early morning jaunts into the forest, we found ourselves shivering. While Samhith huddled into the sole jacket he carried, I wrapped myself tighter into my dupatta which doubled up as a shawl… till the sun came up, of course. And then we basked in its welcome warmth, till it grew too hot, and it was time to leave. A few hours break, and then we were back in the jungle, enjoying the play of sunlight and shadows among the trees and the tall grasses, till it grew too dark to see anything more. Wandering almost all day amidst the towering Sal trees, spotting the elusive tiger hidden in the grass, barely a few feet away; as peacocks danced, enticing their mates, and jackals roamed, searching for prey; as vultures perched on trees, within sight of decaying carcasses to eat, and honey buzzards swooped on unsuspecting bees in their hives, it was easy to understand why this magnificent forest was the inspiration for Rudyard Kipling’s Jungle Book! Come along with me, as I relive my wonderful experience in the wild, at Kanha National Park! 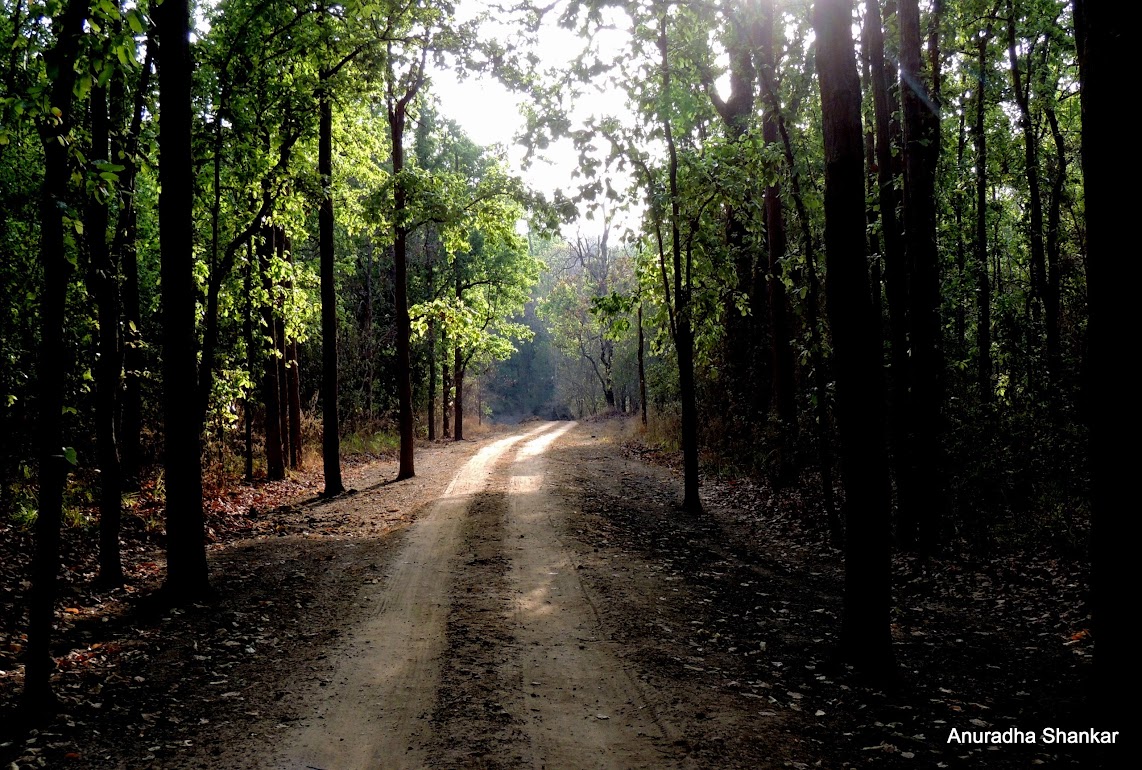 Sal trees dominate the landscape. The Kanha zone is the oldest part of this protected forest, and these trees tower over everything else, forcing us to crane our necks to see the sky beyond. The sun peeking through the foliage is a beautiful sight, with the play of light and shadows which changes as we move.

The Sal is usually an evergreen, but in certain areas, depending on the availability of water, is deciduous. While Kanha itself appears remarkably green in peak summer, these trees here had shed their leaves, which were strewn all over the forest, like a red carpet. 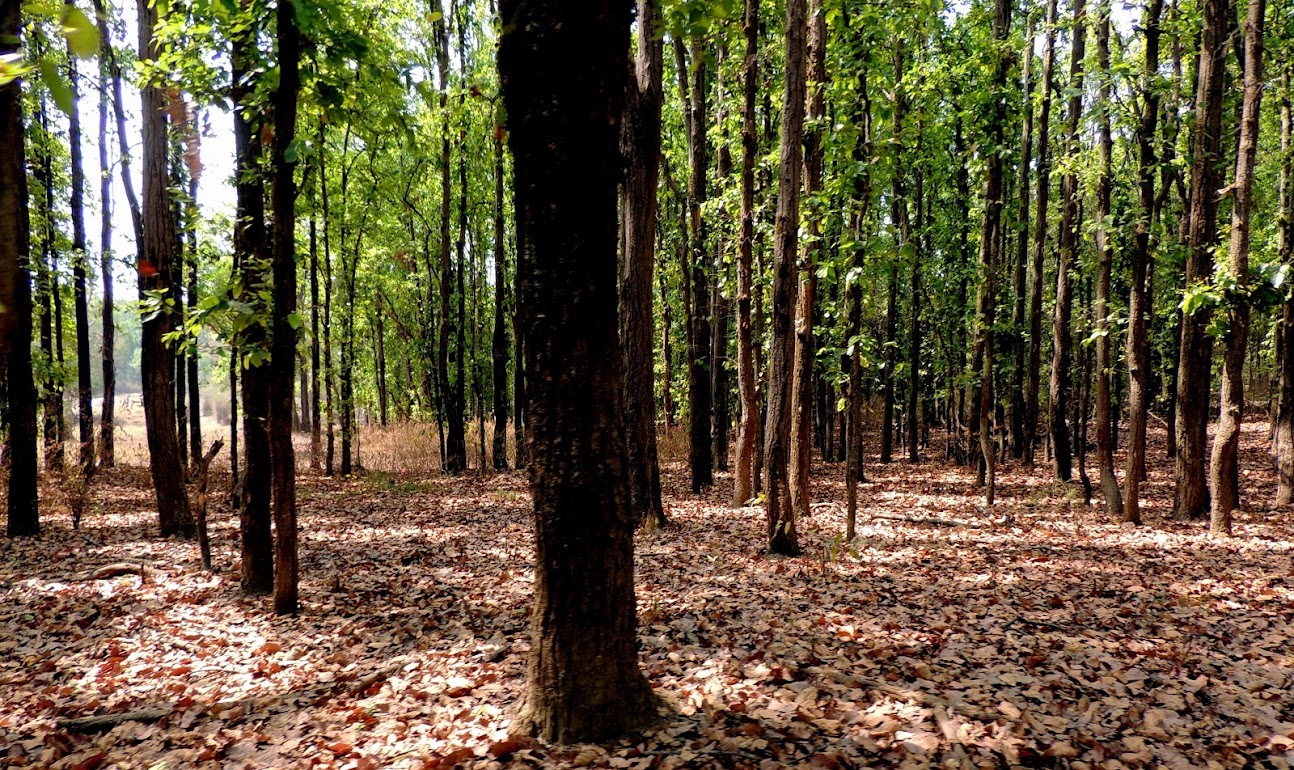 Interspersed among them were the Mahua trees, with their new leaves a delicate shade of red… 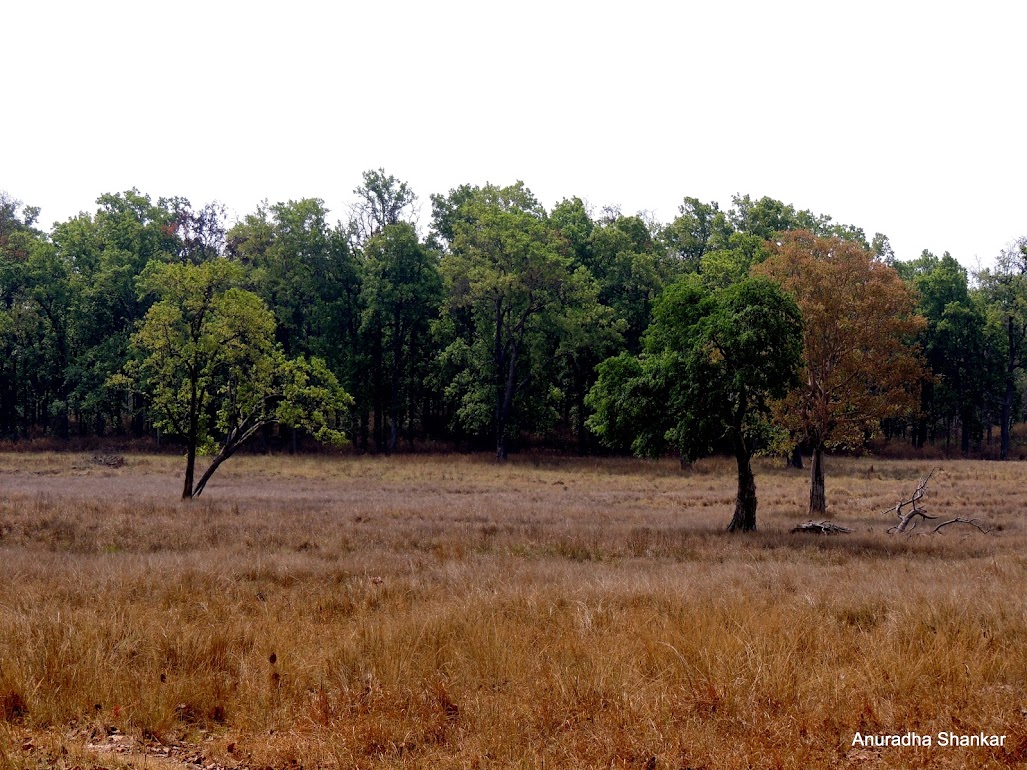 In Samhith’s words, we might not really have an Autumn, but there is certainly a Fall here, in the middle of Summer!

Water bodies are at the heart of any forest, and Kanha is no different. What sets it apart, though, is that most natural water bodies are near, but hidden, from the paths that the jeeps take us on. Only a few are visible from the paths, and they present a pretty sight. 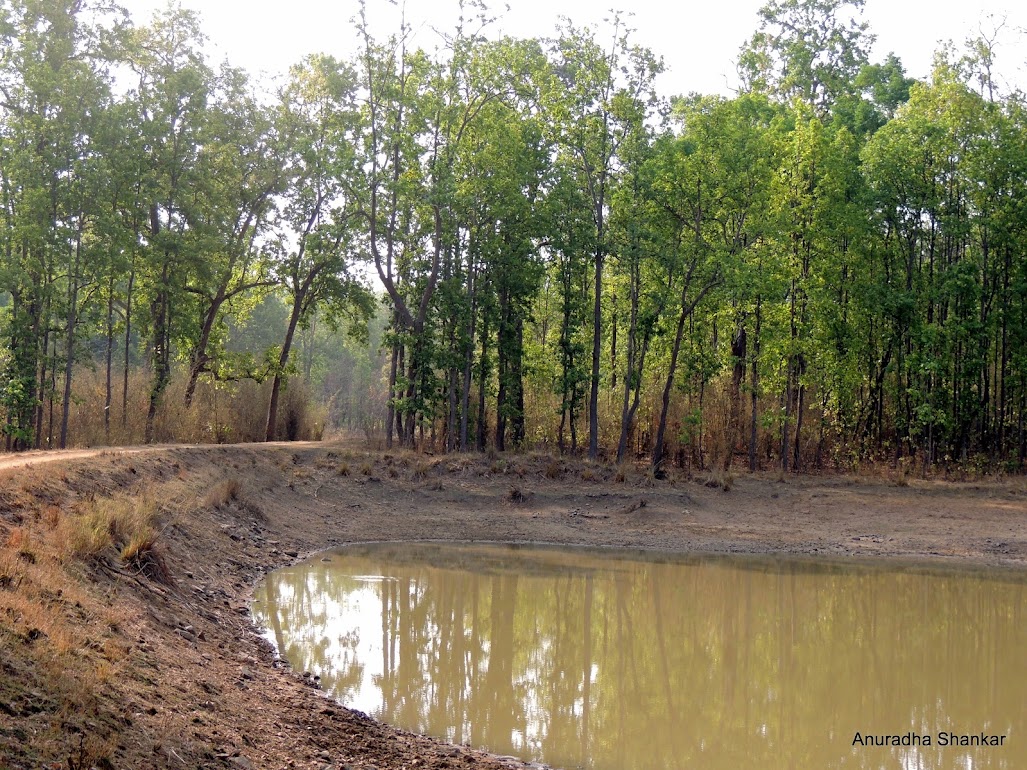 The most famous among them is Shravan Tal, where, it is believed Shravan Kumar came to collect water for his blind parents, and was shot by mistake, by the King Dasharatha. The blind couple are said to have cursed the king, that he too, one day, would be unjustly separated from his son, and die of the torment. This story is at the core of the Ramayana, and it was oddly appropriate to spot a langur sitting on the board which told the story of the lake! 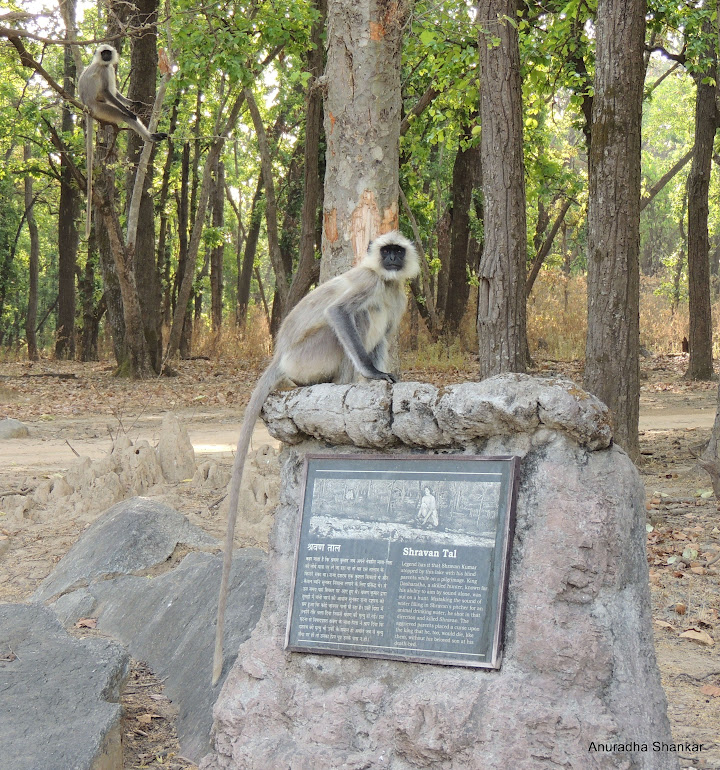 There were peacocks and deer galore near the water bodies (and everywhere else too! J) 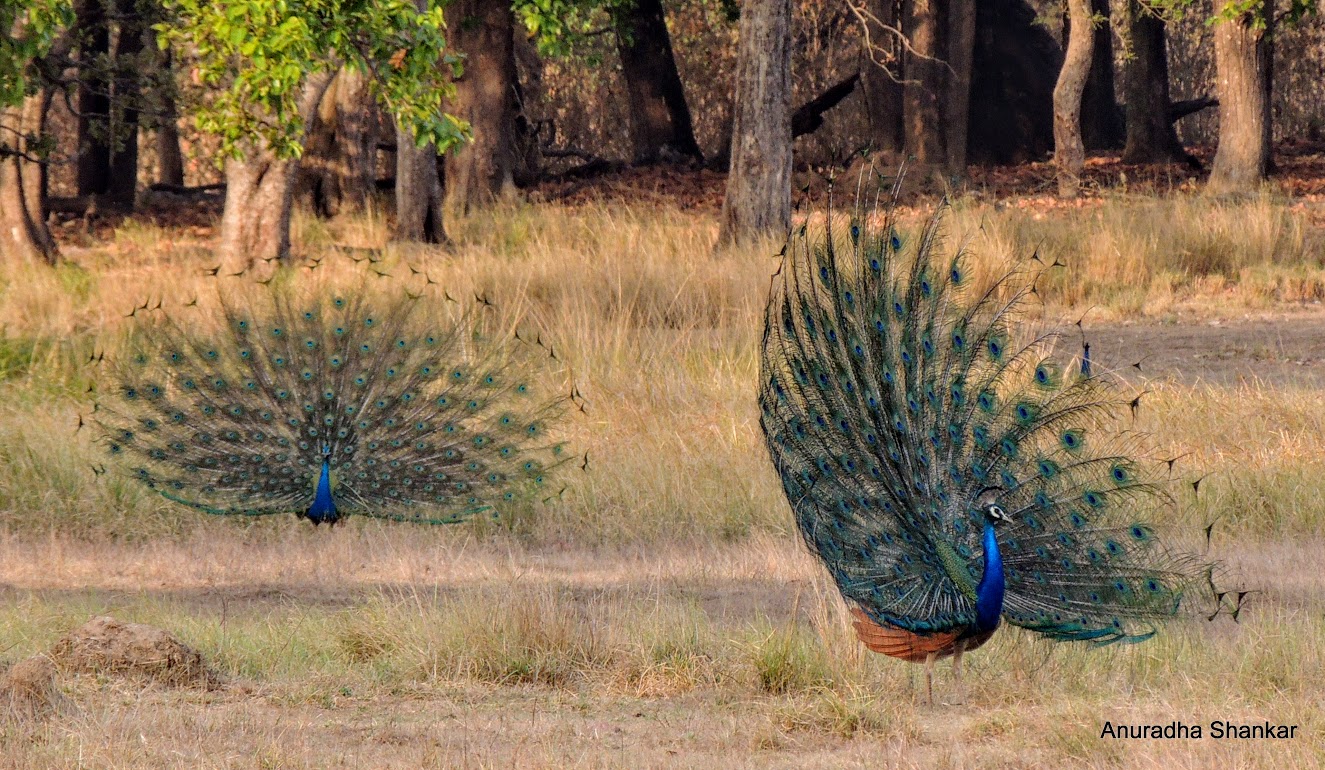 This was also where we spotted birds. A Brown Fish owl was so well camouflaged, that at first it was difficult to differentiate it from the bark….

A Jungle Owlet was so small, and so still, that we mistook it for a leaf, till it moved!

But the most memorable sighting, was that of the Indian Pitta, a bird which has eluded us for a long time. We still haven’t managed a decent photograph, but the sight was enough… for now!

Racket –Tailed Drongos created a racket, and Grey Hornbills flew overhead, but it was spotting the Malabar Pied Hornbill, which was a surprise, since we hadn’t expected them here! Unfortunately, we didn’t manage any photos of the hornbills, but spotting them was reward enough!

Anthills are a regular feature of this forest, and though many were picturesquely situated on pathways, the most memorable sight was that of a Gaur breaking one down.

The forest is part of the Satpura Ranges, and the landscape is interspersed with both, hills and meadows. The hilly regions abound in bamboos, and Mahul climbers, with their beautiful white flowers, cover almost every tree.

The meadows, on the other hand, were once fields. These were cultivated by the villagers who lived within these forests. Over the years, the villages have been cleared, and the people rehabilitated. Many of them work with the forest department, helping maintain the forest, and guiding visitors like us. Grass now covers these lands, providing the ideal habitat, for deer and tigers alike.

It’s just grass here, with a few trees breaking the monotony. I never knew how beautiful grass could look, glowing a bright gold, or red, depending on the sun! 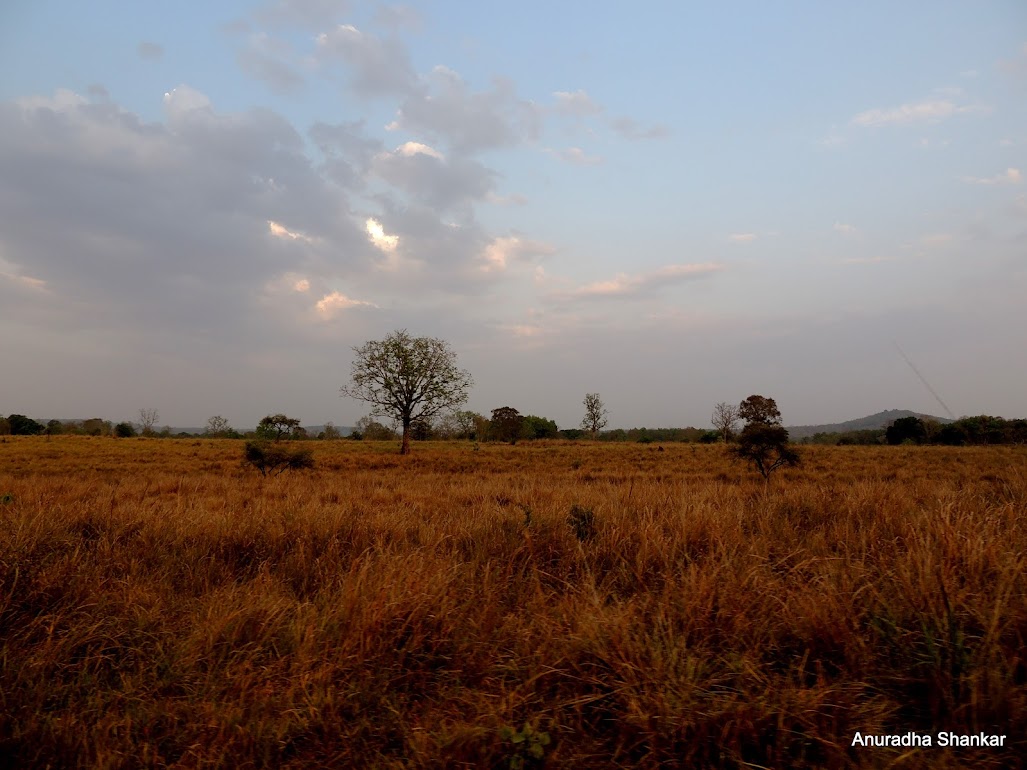 These meadows were also where we had our best sightings – a leopard walking on the road, and disappearing into the shrubs…

Barasingha lounging around, their golden skin glowing in the sun….. These Barasinghas are the hard ground variety, which are only found here, at Kanha. Back in 1965, their numbers had fallen to 109, but thanks to a dedicated breeding programme, their numbers have now risen to over 700, and they can now be spotted all over the forest!

Vultures perched on trees, and hovering over rotting carcasses hidden in the grass…

And a tigress, hidden in plain sight! 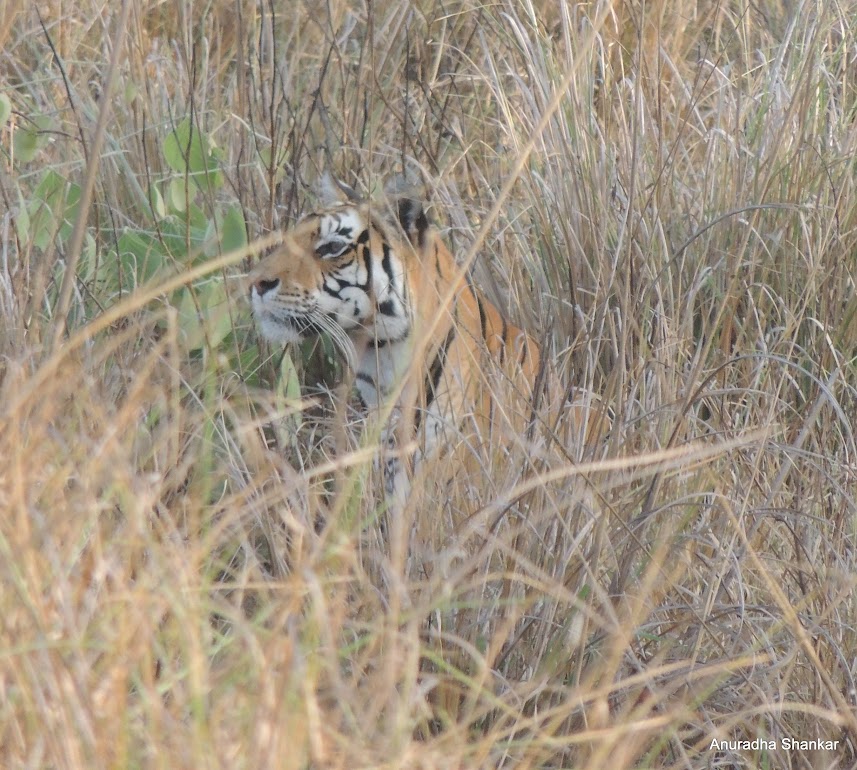 We had stopped to see a pair of jackals, and listening to alarm calls in the distance, wondered where it came from. Suddenly, a fellow traveller pointed to the grass just a few feet away, and there she was – a tigress, resting in the grass. We had been there for more than 15 minutes, and hadn’t spotted her, till she lifted her head, probably disturbed by our presence. If she hadn’t moved, we probably would have continued to remain oblivious to her presence. 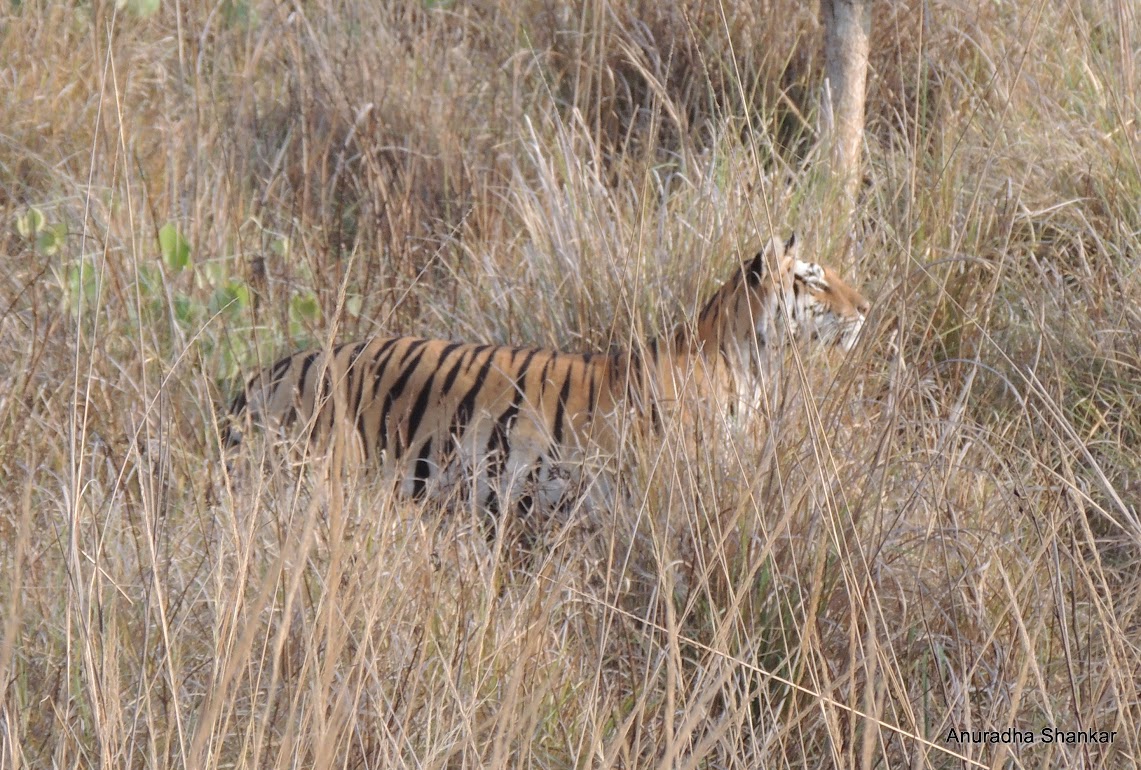 As we waited, and watched, she moved a little further away, and, after another quarter of an hour, decided to move further away, towards a pool of water which lay beyond. Following her, we watched as she settled down once again. 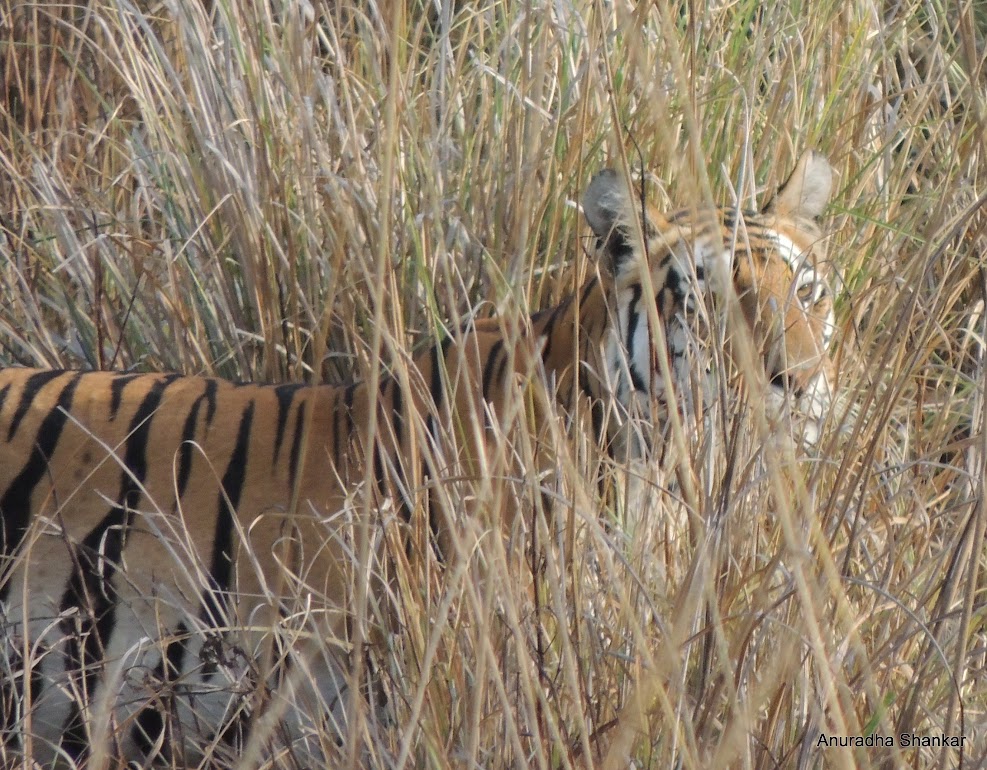 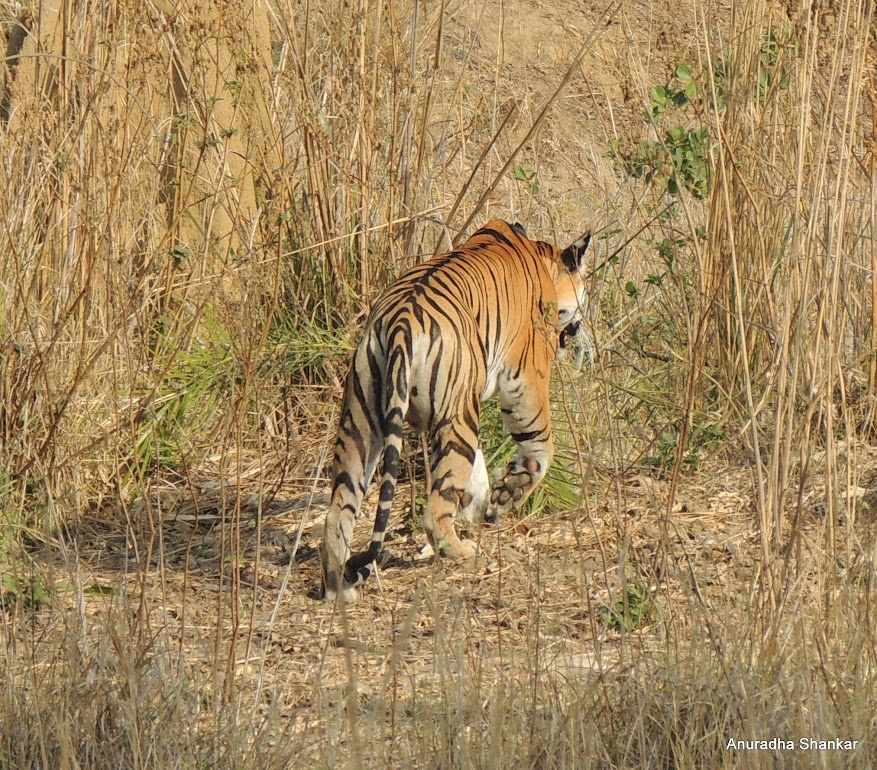 All around her, life in the jungle went on. A peacock danced, courting its mate, just a few feet away; the jackals walked up and down the path; and a herd of Barasinghas came by. She seemed to sense the deer before they sensed her. She lifted her head, but remained utterly silent and still, as the herd moved towards the pool and drank their fill. 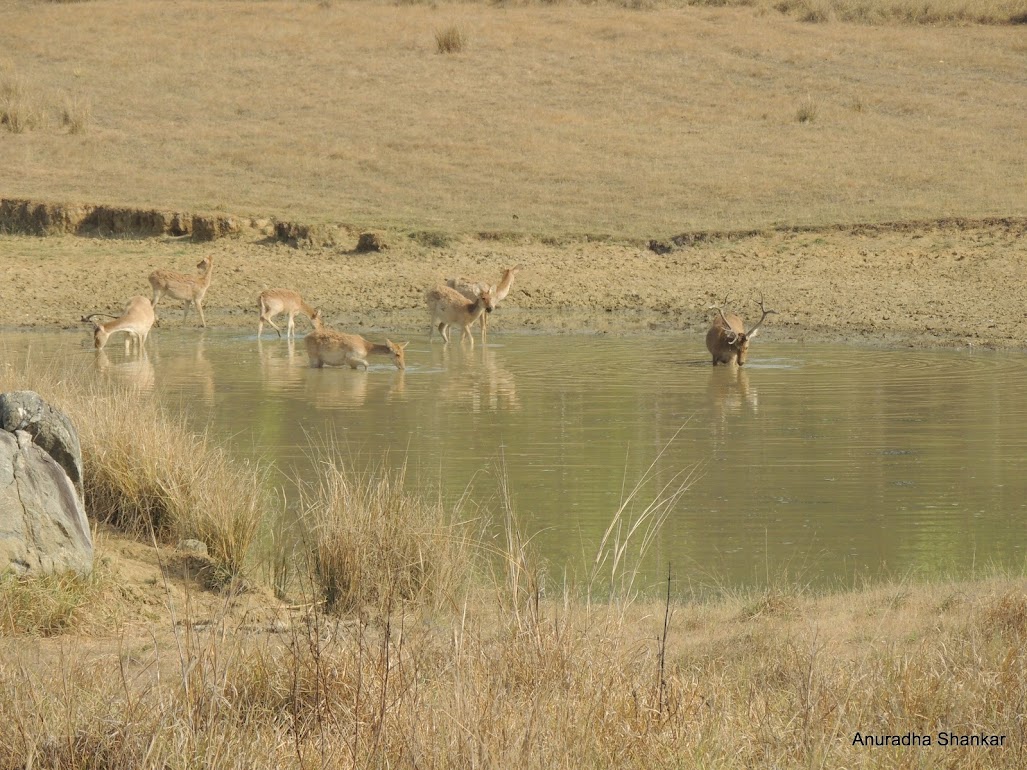 Then, she began moving, slowly, behind the grasses, heading towards the pool, but the Barasingha were still not aware of her.

As she emerged from the grass, she leapt up, with a burst of speed. At this moment, I gave up my camera, and watched the spectacle, as the herd suddenly realised her presence, and began their alarm calls. Very surprisingly, they didn’t run, but stood their ground, calling out together. The tigress, realising that she had lost her element of surprise, slowed down, and moved away towards the trees, as the Barasinghas continued to stand united against her. What a scene that was! 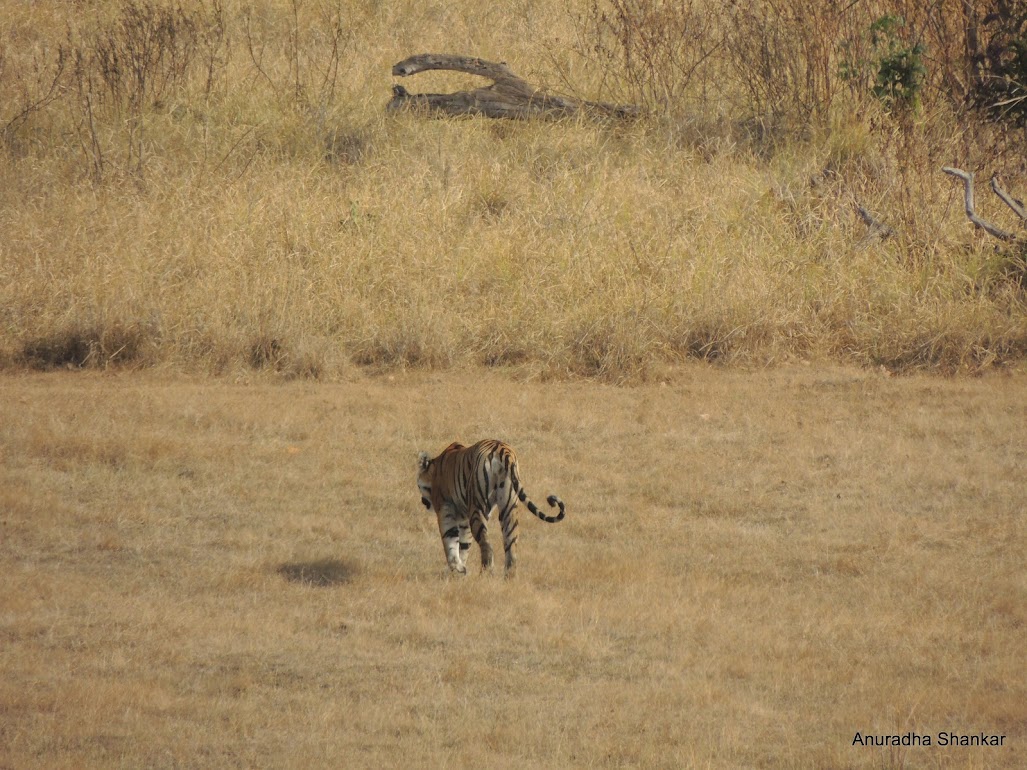 More than sighting the tigress, it was the whole incident that I found more interesting – that the peacocks weren’t bothered by the presence of the tigress, that the jackals didn’t seem to mind her either; that the deer were blissfully ignorant of her presence, till she actually appeared, but more than anything, the combined resistance of the deer, in facing their arch enemy!

It felt as if we had been given an insight into the lives of the animals. And it made me wonder - isn’t that what we should gain from every jaunt into the forest? An insight into all the life that thrives within it, not just the tiger?

When I first began writing about our trip to Kanha, I intended to write multiple short posts, each talking about the different birds/animals we had spotted. However, it was as I wrote, that I realised , that the idea defeated the purpose of what I wanted to say – that the forest is one entity. We can’t go into a forest, and ask to see the tiger or the leopard. We have to see the forest for what it is – a bustling centre of life, where there is so much happening all around, at any point in time. We just have to have the eyes (and the ears) to notice, and imbibe, as much of it, as we can!