The Temple of Neelkanth at Alwar, Rajasthan

June 01, 2017
Deep inside the Sariska Tiger Reserve, a narrow road led us to the foothills of a mountain. There, it abruptly stopped, and we wondered how we were expected to go on. Our driver looked at me accusingly, surely blaming me for getting us all lost, in search of a temple he hadn’t heard of. Just then, a local on a bike appeared, hurtling out of nowhere. Seeing us, apparently lost, he stopped, and we asked for directions. He simply pointed to the mountain, and said the temple was up there. I was aghast, at the thought of climbing the mountain, in the heat. But then he pointed to a rough path ahead, and told us to follow it. We stared at the path, if we could call it that, in dismay. But having come this far, we didn’t want to return without trying our best. And by now, our driver had discovered his adventurous side. Metaphorically gearing up his loins, he got in, and assured us he could get us up the mountain. The next hour was a trial for our nerves, as the rocky path took us higher, and we bumped and swayed with every curve. Beautiful as the scenery was, all we could do was hold on tight. At last, we approached a gateway, and heaved a sigh of relief. There wasn’t a soul in sight, and we tried a few paths, all of which led us to dead ends, until, at last, we arrived at a clearing, and caught our first sight of the Neelkanth Mahadev Temple. 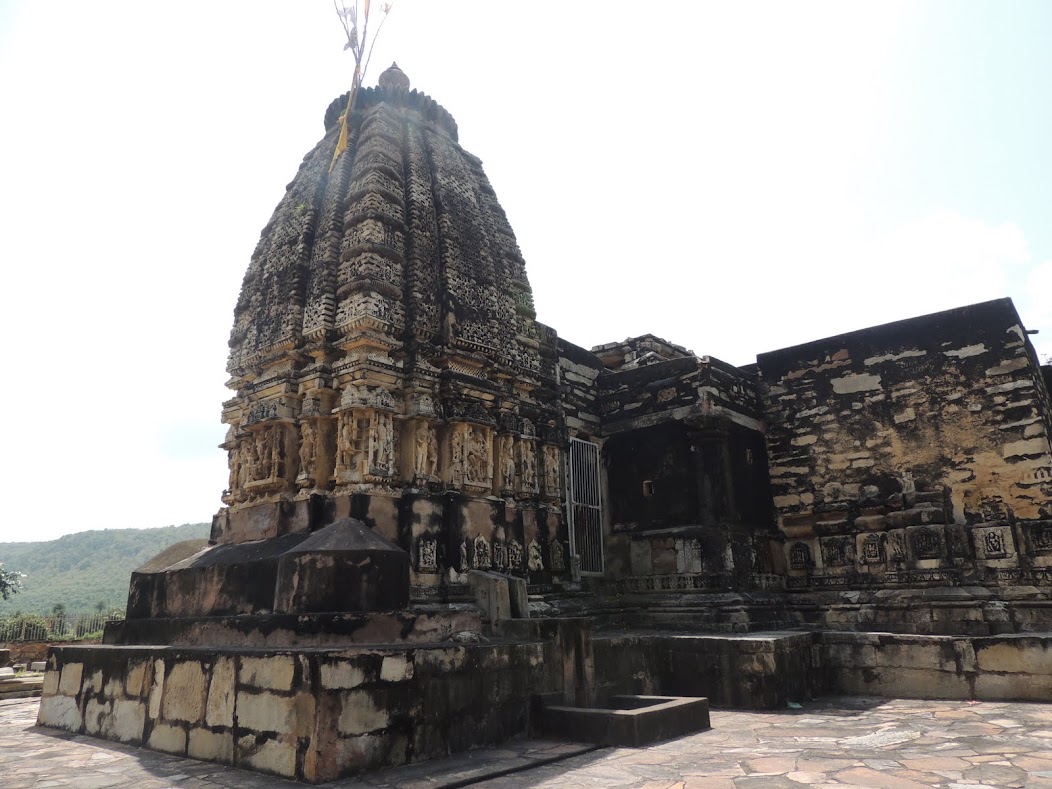 The Neelkanth Mahadev temple (according to the ASI website) was built in the late 10th century, by the king Mathanadeva, a feudatory of the Pratiharas. Interestingly, while the temple is named for Shiva as Neelakantha, the blue throated one who swallowed poison and saved the world, the temple has three shrines – the central one dedicated to Shiva, housing the aniconic Shiva linga, and two similarly sized shrines on either side, dedicated to Brahma and Vishnu. Sadly, both these shrines are locked up, since they are partly ruined, and the idols are broken. However, the doorways, which are still intact, suggest that the temple was built to worship all three deities.

The three shrines share a common Rangamandapa, which is preceded by a porch. The pillars as well as the ceiling are elaborately decorated.

Most beautiful, however, are the Surasundaris, or celestial women, shown on the decorative brackets holding up the ceiling. Their stance is reminiscent of the Shalabhanjikas, whom we usually associate with Buddhist structures.

The temple is built on an elevated platform, and on the base, as well as the outer walls of the temple, are a number of sculptures, of deities....


Ashta Dikpalas,  the guardians of the eight directions…

Vyalas or mythical creatures, and Mithunas or couples.

In the main niches around the central shrine are Narasimha in the North, shown here tearing into Hiranyakasipu with his bare hands, while Prahalada looks on….

Tripurantaka in the South, his many hands filled with weapons, the bow aimed to shoot the arrow, towards the three cities of the Asuras…

And a gorgeous composite figure in the East.

The ASI identifies this figure as Hari-Hara-Arka – a composite form of Vishnu, Shiva and Surya. However, considering the placement of the figure (facing east), the presence of the Brahma and Vishnu shrines in the temple, and the Kamandalu he holds in one of his hands, I think this could be Hari-Hara-Pitamaha-Arka, a composite form of Vishnu, Shiva, Brahma and Surya, seen in many other temples of the period, including ones at Khajuraho, Kiradu, as well as Ambernath.

The sculptures on the walls of the temple are just a fraction of what must have originally stood here. There are sculptures strewn all around, and the slightly better ones are placed under lock and key in two sheds on the sides of the temple. I wished I could go in and look at them, but they are out of bounds to visitors.

There was no official from the ASI when we visited, though this is a protected site. In fact, there was no one around, but a young boy about Samhith’s age, the son of the priest who conducted the prayers here. They lived in a nearby village, and his father was out for the day, so the boy was on duty instead. Samhith took one look around, and decided that the peacocks outside were far more interesting. Shankar, on the other hand, decided that the intact Shiva Linga in the sanctum merited prayers, despite the absence of the priest. He managed to befriend the young boy, who led him to a tap nearby to get water, and then watched while Shankar bathed the lingam, chanting the Rudram. Meanwhile, I walked around, ruing the state of the sculptures and the utter lack of maintenance.

Interestingly, just 100m from the temple is a colossal statue of the Jain Tirthankar Shantinath. Sadly, however, there was no board to inform us where exactly it was, and we couldn’t see it from where we stood. Besides, our driver was getting restive. It was late, and he had to drive down the rickety, rock covered path. We finally gave in, and decided to call it a day.

Each of us had enjoyed the experience – while Samhith was thrilled with the peacock feathers he had found strewn all over, Shankar was quietly pleased with the experience of bathing the Shiva Lingam in this ancient temple with his own hands. As for me, there was a sense of satisfaction, in visiting a temple I had yearned to see, since I first read about it. It was certainly worth every minute of the gruelling ride of the worst road I have ever been on!