August 22, 2008
Munnar is one of the most beautiful hill stations of our country, one which makes the appellation of Kerala as ‘God’s own country’ come true. It is a land of mountains covered in every shade of green imaginable and unimaginable; of tea plantations which stretch over miles and miles of countryside, not sparing an inch of the mountains; of waterfalls which cascade down the mountains, their origins too high to be seen, their final destination unknown, but their force increasing by leaps and bounds of the water……. The beauties of Munnar are to be experienced, not enumerated. But the memory I shall always carry with me of this magical place is the fog - The fog which made the road ahead practically invisible; the fog which appeared out of nowhere, bringing with it the chill and the monsoon rain. But before I get carried away, I must begin at the beginning.
The beginning was early in the morning on the 15th of August, our Independence Day, when we left our cosy beds to catch the first flight to Coimbatore. We reached my sister-in-law’s place at Tiruppur for lunch, and soon we had decided to leave for Munnar. Never mind that we had no hotel reservations and it would be terribly crowded, being a long weekend. My husband and brother-in-law are great optimists (they share quite a lot besides their names- my husband is Shankar while my brother-in-law is Sankar) and they were sure we would manage to get a place to spend the night, and that too, comfortably. 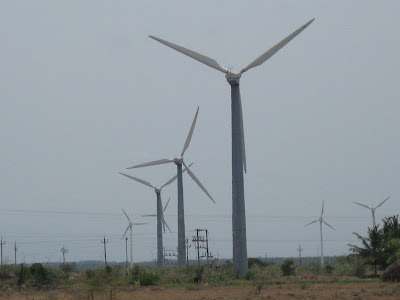 Windmills along the route

Well, to cut things short, we were off in Sankar’s new Hyundai Sonata Gold, on our way to Munnar. The distance from Tiruppur to Munnar is about 150Kms, and along the way, our first stop was at the Amaravathi Dam. The Amaravathi River is responsible for the lush greenery in this part of Tamilnadu, mainly Udumalaipettai and the surrounding areas. My father’s ancestors hail from this part of the country, their village being one of the so-called 7K villages (all seven names beginning from K) known for their fertile lands, all on the banks of the sacred Amaravathi. In fact, our ancestral temple also stands on the banks of the river, but that is another story, one which I shall relate some other time……. 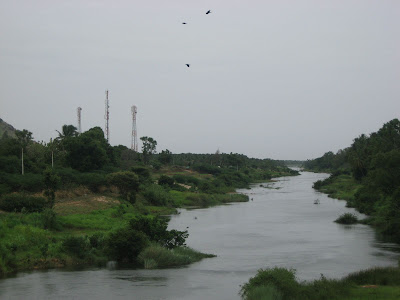 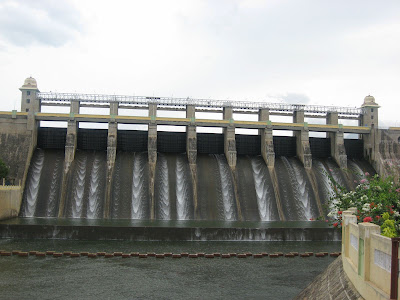 
The rain gods had been generous lately, and the Amaravathi dam was full, and a sight to be seen. The water from the dam falling into the river, the canal full of water, into which children happily dived and swam - all this was a wonderful sight. But what my son Samhith really enjoyed was the Crocodile Park. Yes, there is a crocodile park, about a kilometre from the dam, where crocs are reared and taken care of. To give them credit, the park is full of crocs, big and small. There are Magars (Crocs) and Gharials, which are only found in the Gangetic rivers, and are easily recognised by their characteristic long snout (or mouth). But it is sad to see the condition of the pools of water that are supposed to constitute their natural habitat. All the crocs were fast asleep and were least interested in waking up. Somehow even their lethargy attracted Samhith, who wanted to know if they would at least wake up to eat! 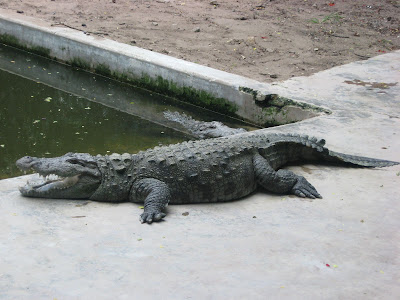 A Corcodile sleeps with his mouth wide open 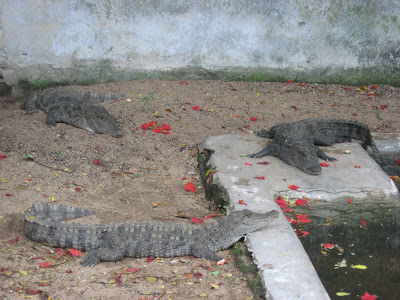 Baby Crocs in the Corocodile Park

After we passed the dam, things began to get more interesting as we entered the Indira Gandhi Wildlife sanctuary at Chinnar. It seemed to be our lucky day, for we saw a whole herd of deer and a few peacocks along the way. Though we stopped to take a good look at these animals, I did not take a single photograph this time, choosing instead to capture the memory in my heart. However, the experience was short lived, for the poor creatures were scared away by drivers who were more interested in rushing to their destination than enjoying the journey itself, appreciating the beauty of nature along the route. A couple of horns blared out, and the animals scattered into the forest, disappearing in moments. After that we only glimpsed monkeys, which are plentiful, wherever you go in India. 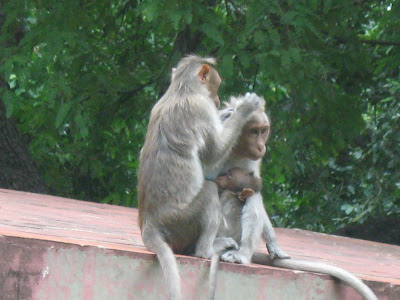 A monkey family at the forest Checkpost


Vast stretches of tea plantations announced the approach of Munnar. It looks just like a green carpet from a distance, only that it is impossible for a weaver to create as many shades of green like nature does. I understand that the green carpet is a constant all the year round, but now, in the monsoon, it was absolutely breathtaking! Every few minutes we glimpsed waterfalls amidst the greenery, some simply thin streams of water flowing along the fissures in the rocks, while some were thundering along in full force over the rocks of the mountains smoothed over time. 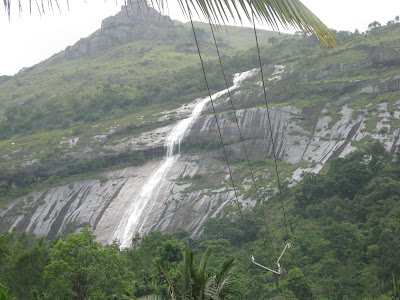 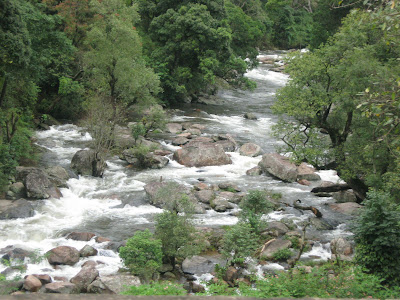 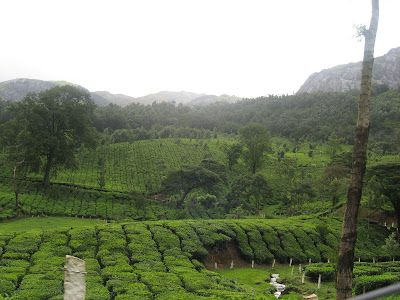 
By the time we reached Munnar town, it was evening, and Sankar managed to contact a friend of his, who arranged a room for us. We were first told that it was about 2Kms from the town, but ended up about 5Kms from the town. The place had no name. It seemed to be an extension (probably illegal) of the Sun Mount View hotel, but the rooms were very comfortable, and we had a view over the valley and the mountains beyond them. We took over 2 rooms and were glad to call it a day after dinner at the Whispering Meadows, a Km further from our place. 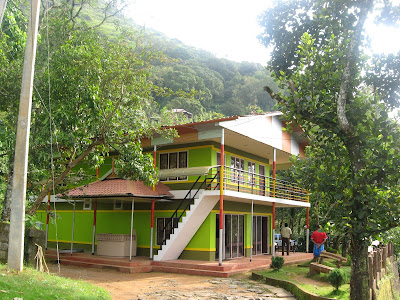 We needed all the rest we could get, so as to be ready for a the day ahead, for we planned to do all the sightseeing we could in a day before returning to Tiruppur. Keep looking out for details of the wonderful day we had in Munnar.......
kerala munnar Nature vacation