Magnificent Munnar – Part II - A day in the hills

August 29, 2008
Munnar has enough magic keep one enthralled for at least 3 days. There are a number of places to see and lots of trekking routes to explore in all the four directions. We however had only a day with us, and had to make the most of it. We decided to take the route which would take us to the dams and lakes where we could spend the day boating, which Samhith enjoys immensely. As it happened, most other tourists seemed to have had the same thought, and every boating pier was full, and we had to return without a single boat ride. We had lots of fun in other ways though, but let us take things in sequence. 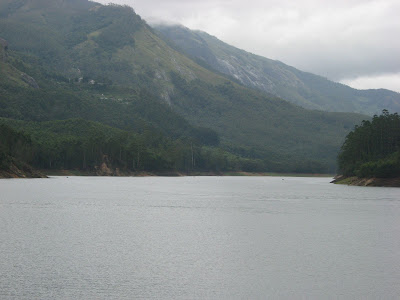 The View From Mattupatti Dam


We started for Mattupatti Dam, about 12 Kms away. Here, in the lake created by the dam, one can ride speedboats. However, the speedboats were few, and tourists too many, and we were told that we would have to wait for at least an hour. None of us is known for our patience, and we decided to move on, albeit with some reluctance. Outside the boathouse, we found lots to occupy us though- there were the usual stalls selling wooden articles, food, and of course, games. Sankar tried his hand at shooting balloons, while Samhith collected them, and we spent more than half an hour whiling away our time. The best part here was the elephants, whom we could feed a basket of fruits, and climb on for a ride. We did both, Shankar feeding an elephant, and Sankar, Sandhya and Samhith going for an elephant ride. 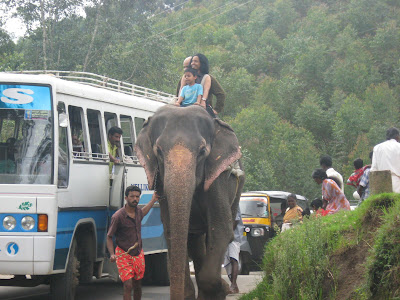 Sankar, Sandhya and Samhith go for an elephant ride


We then moved on further, intending to visit Top Station (34Kms from the town), from where one could get a birds eye view of Tamilnadu. We were almost there, when we stopped for tea at a small stall by the roadside. The road forked there, one going towards Top Station, just a few minutes away, and the other towards one of the wildlife sanctuaries. (Incidentally, there are no less than 6 wildlife sanctuaries around Munnar – see the photo of the banner listing them). 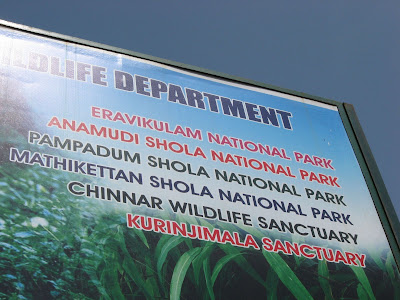 We had now to decide what we wanted to see more – the jungle or the view. Samhith saw a calf tied to a pole there, and he found that more interesting than anything he had seen so far. His decision made, he went off to play with the calf while I wandered away with Sandhya, trying to find a washroom. It turned out that the nearest one was at Top Station, and we walked all the way, stopping to appreciate the riot of colours in the form of flowers surrounding us. After that, the view from Top Station was disappointing, to say the least. We decided to head towards the forest. Meanwhile, our husbands had spoken to the locals hanging out at the tea stall, and had decided that the excursion into the forest was a waste of time, as the calf my son was playing with was in all likelihood, the only animal we would come across. So there we were, turning back from the highest point in Munnar, retracing our route back to the lodge. 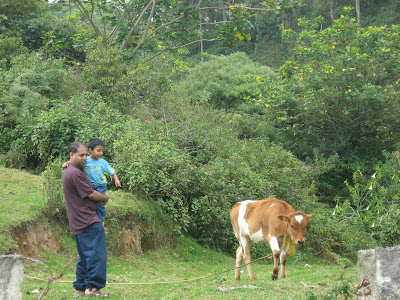 Samhith Plays with a calf at Top Station 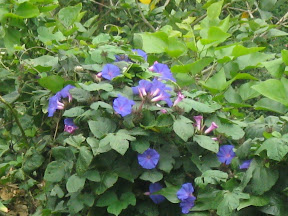 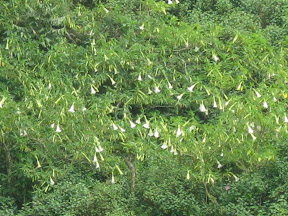 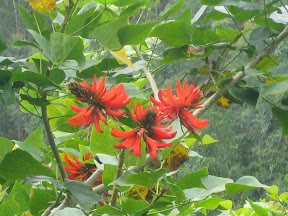 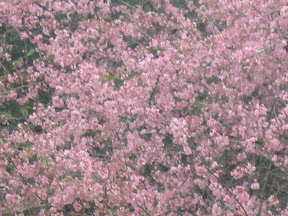 A Riot of Colours
Our first stop on the way back was at the Kundala Dam. We had passed it on our way up the hill, but had decided not to stop. Now however, we decided to see what attractions it had to offer. This is a good place for a picnic, for the river bank is a vast expanse of green velvet-like grass, with facilities like boating (Pedal boats, row boats and Shikaras) and horse riding available. 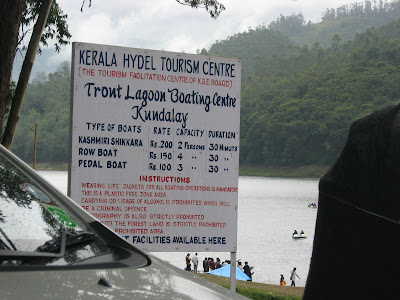 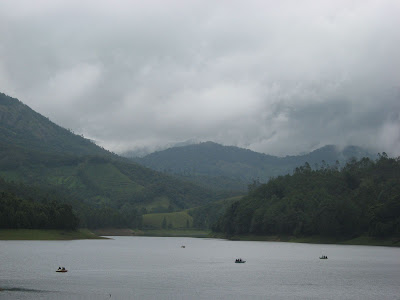 It is the ideal place to visit as a group, and I wished I could just sit on the river bank and watch others play. In fact, the place was full of people who had come from schools and colleges, equipped with bats and balls, racquets and shuttlecocks. The rain however arrived to play havoc on their well laid plans, and we all rushed to the few sheltered areas available in the form of small hut-like structures. 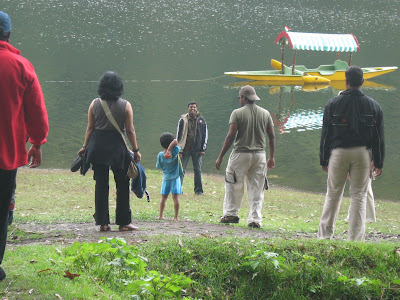 Samhith joins a group of youngsters for a game...

Here again, the boats were all booked, and there was a long line of people waiting. Again, we dropped the idea of boating and instead opted for a horse ride to make up for Samhith’s disappointment. 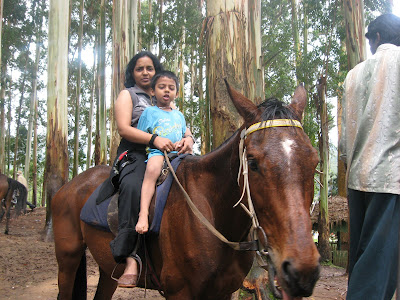 Sandhya and Samhith go on a horse ride
We then started back home, wondering whether to take a look at the few places left or head back to the room and take some rest. Over a hot cup of tea and steaming hot Onion and Potato pakodas, we decided to try out the Attukal Waterfalls, which, we learnt would be on the route back to our lodge. This decision led to the best time I have ever had in my life. Indeed, it must have been Lady Luck who made this decision for us! 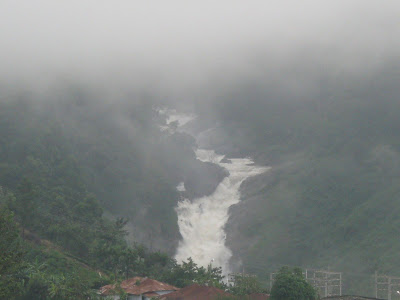 The Attukal falls seen from a distance
We were about 5 Kms from Attukal when the weather started changing. It began with a slight chill in the air, and then a slight drizzle. Soon, before we even realised it, the visibility started reducing by inches, and we were surrounded by a curtain of thick fog. None of us had seen anything like it, and we were all enthralled by the sight! I wore out my poor camera clicking photos left right and centre! 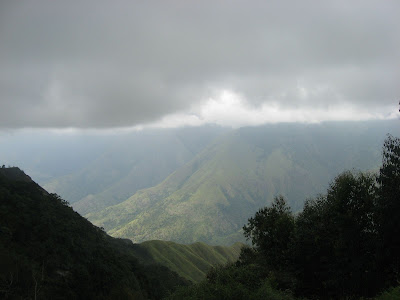 Gathering clouds indicate the changing weather....
We found the turning to Attukal from the main road, from where the falls were about a kilometre away, and took the turn, determined to see at least one place properly in Munnar. The road led through the tea estates belonging to Tata Tea, and was edged by tea plantations on all sides. We however, could only get a glimpse of the vast carpet of tea leaves due to the fog. All our attention was on the road, which was hardly visible. Sankar, driving his huge car, had the toughest job of all, looking at the road ahead, navigating the sharp curves of the road, and also keeping an eye on the deep valleys on both sides. He said, later that the most difficult things about the drive was the knowledge that we were all sitting with him the car, and even a small error would prove to be fatal! 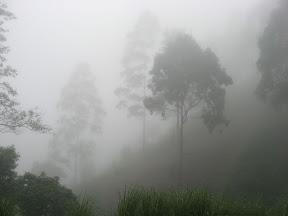 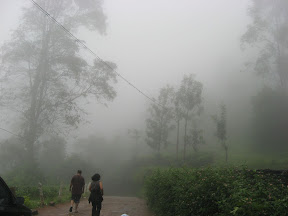 Pictures of the Fog...


The sound of rushing water alerted us to the nearness of the waterfalls, and suddenly the falls themselves appeared out of the fog. The sight of water rushing with such force is unnerving, to say the least. I have never seen a sight like that before, and the memory shall stay with me forever. There is a small bridge on the stream from where one can get the best view of the falls. Here, one is very conscious of the sheer force with which the water flows, and even a wrong step could spell doom. 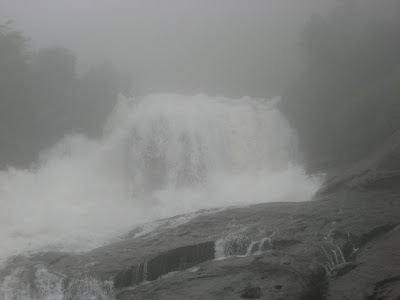 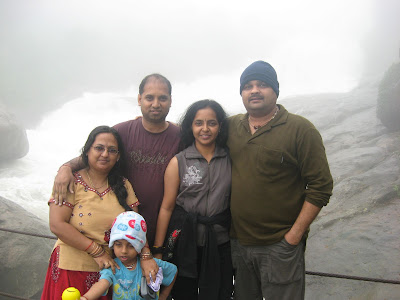 All of us at the Attukal Falls

There is a small shack, or rather a house where one can get tea and snacks, while watching the falls from a safe distance. We spent some time walking around the place, getting a feel of the falls, but decided to get back as soon as possible, as the fog was getting denser. The return journey was as thrilling as the arrival, but we reached our lodge safe and sound, too early for dinner, but in no mood to sit in the room after such a wonderful adventure. 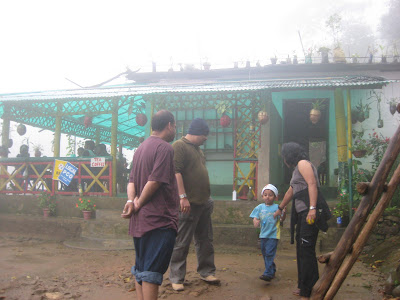 The restaurant at the Attukkal Falls


We had decided to have dinner at the Whispering Meadows resort about a kilometre away, and to while away the time, decided to take a walk. What was planned as a short walk up to Whispering Meadows turned out be a one and a half hour walk, going beyond the resort, and turning back when it began to rain. Finishing our walk in the rain, with the fog getting steadily thicker, was an adventure in itself, one I wouldn’t trade for anything! Once we were through the excellent dinner at the resort, we had no more energy to walk back, and hired a vehicle from the resort back to our room. 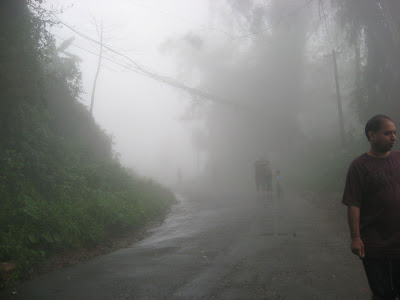 
Thus we called an end to a day that began like a typical day at a hill station visiting the various points, and ended with an experience more like an adventure, one that all of us will always remember.