May 06, 2010
There are so many places to visit in and around Binsar that it was difficult to decide which to see on this trip and which to keep for another… for one trip is surely not enough for such a wonderful place. Faced with the prospect of Bageshwar-Baijnath and Kausani v/s Patal Bhuvaneshwar, for only one could be completed in the only day we had left, we decided to settle for Patal Bhuvaneshwar, giving precedence to spirituality over tourism. Looking back, it was a good idea, for the trip to Patal Bhuvaneshwar was truly unforgettable, and Kausani is a place we can visit at leisure another time! 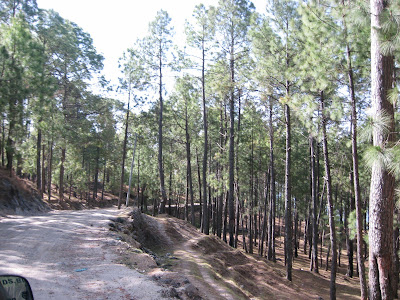 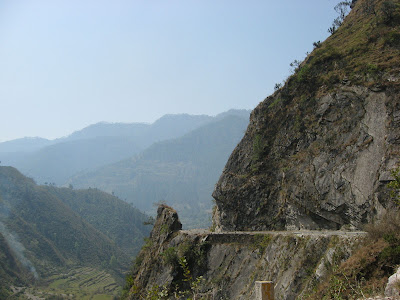 The trip began on a positive note, the scenery on the route being even more beautiful than anything we had seen so far. The snow capped mountains were visible just over the peaks of the nearer mountains, and I tried vainly to get them on my camera. Unfortunately they were still too far off to be captured, and by the time we approached them, they were enveloped by clouds, refusing to show us even a glimpse! We thanked God for helping us to decide on Patal Bhuvaneshwar, for Kausani would have been a wash-out with the cloud covering the , the main attraction of the place! 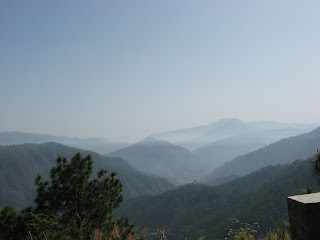 As we sped along the winding roads, we approached the river Sarayu and remembered our trip to Ayodhya when the river was full and we had a wonderful dip in the clean river. Now the river was dry and the river bed was seen clearly with their polished pebbles attracting us. We stopped for a while at a place which Samhith christened ‘stone-heaven’, for all we could see were stones of all shapes, sizes and colours……. We collected quite a lot of them, as many as we could carry, and as to the rest, we decided to photograph them so that we could see and remember the wonderful sight! 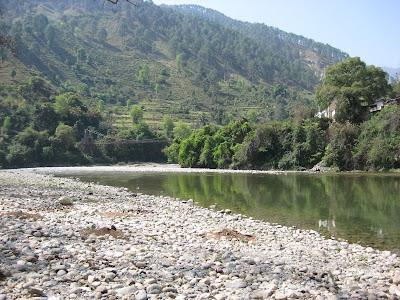 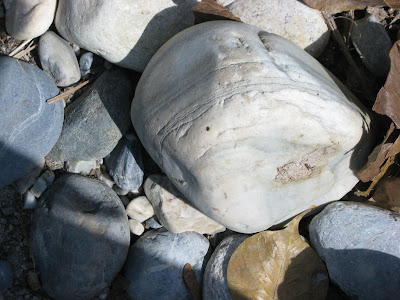 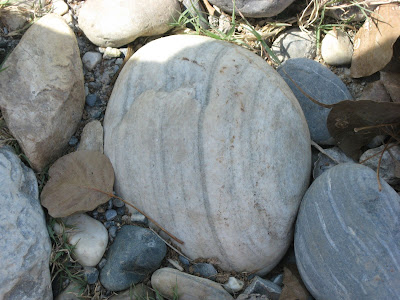 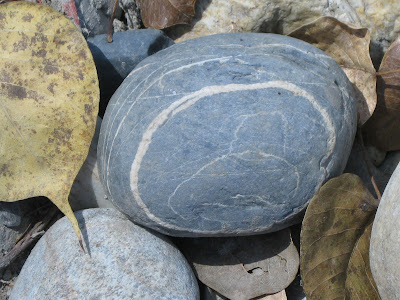 Our driver was amused that we would be so interested in the dry river, and informed us that with the advent of summer, the snow in the higher reaches of the Pindhari glacier would melt and the river would flow again. Of course, he added that the rains would arrive and flood the river and the villages around. The people in this area lived in the permanence of draught and floods alternating through the years. Neither the change of state, government or name had changed anything in the area…As of now, both banks of the Sarayu were covered by wheat fields, their greenery contrasting with the stony hills at whose foothills they lay. 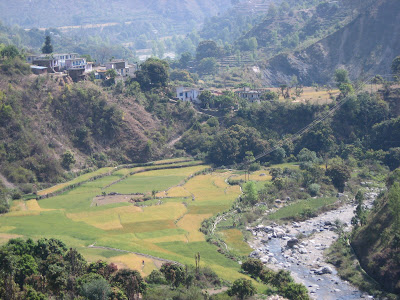 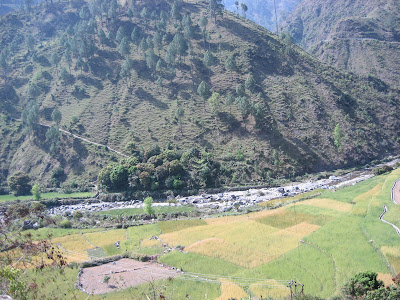 A little further on, as we left the river below us and climbed higher over the mountains, I tried to explain to Samhith how different plants and trees grew in different areas, at different heights. As an example, I told him about the mango trees which grew in such abundance in the Konkan area, and the pine trees which covered the mountains here. Suddenly, our driver laughed and said, “Madam, aap theek bol rahe ho, par Bhagwan ki Shakti dekhiye, yahaan pe aam aur kele bhi ugte hain!” (Madam, what you say is right, but look at the power of God, here, we have mangoes and also bananas growing at this height!). He further explained that the area we were approaching was among the highest in the area, but the only one which, amongst all the pines and the few Deodars and oaks, one could also spot mango as well as banana plantations! Try as they might, they never flourished outside this area, he said. Of course, he wasn’t an expert, but we soon came to a grove of mango trees, all of them in full bloom. In a month or so, the mangoes would grow, and by peak summer, we learnt that they would be huge, almost the size of a small papaya! As to bananas, they were next in line, and I excitedly photographed some of them from the moving car! (Just a clarification: I really have no idea about which plants grow where……. I was too happy to get rid of biology after school, but I certainly did not expect to see mangoes and bananas at the top of a mountain from where we could see the snow capped ! Besides, they made a change from the omnipresent pines!!!!) 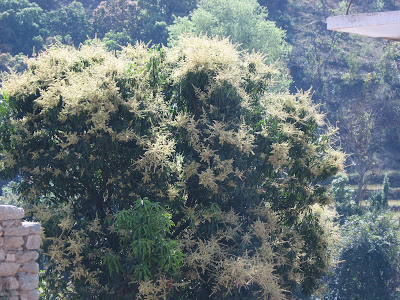 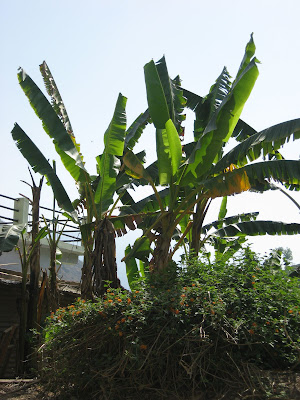 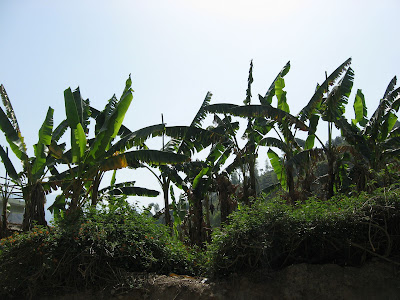 We approached Patal Bhuvaneshwar after a four and a half hour ride from Binsar, and after a short drive through a small town/village, came to an abrupt halt at an arch! I looked around vaguely, wondering where the apparently popular caves were, and our driver pointed to the arch, and told us to simply follow the path from there. 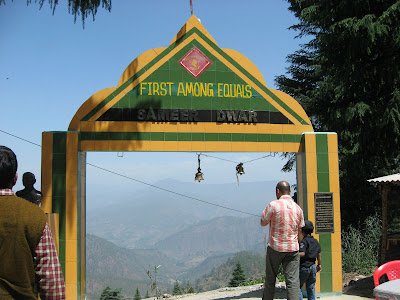 Usually, my experience is that the first section of any path is in good condition, and deteriorates further on, but here, it was the opposite! As soon as we stepped on the path, we realized that it took a sharp turn downwards, and most of the path was broken, a new one was being built, but was nowhere near complete. This sunk my expectations, and I wondered what lay ahead as I managed to walk down the path without falling down, and came to the proper path, which, thankfully was in a very good condition. 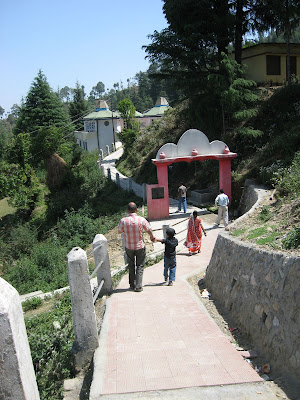 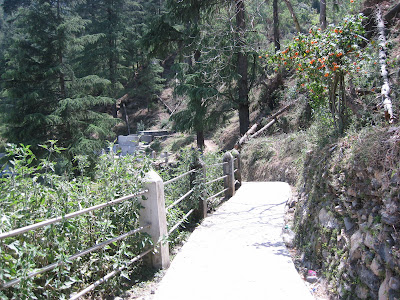 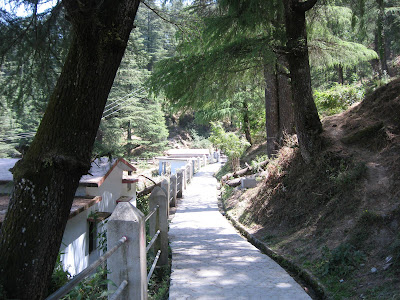 On one side, the path hugged the mountain, and on the other, we could see the valley with its pines and deodars extending far into the distance, while other mountains loomed in the distance, extending up to the horizon. 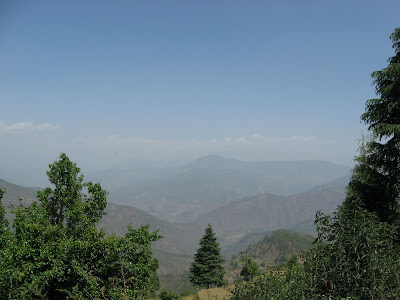 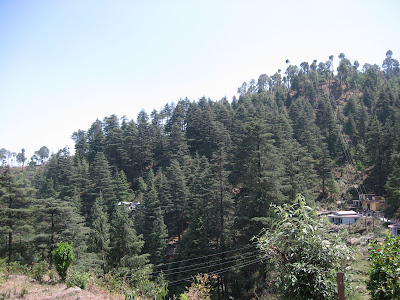 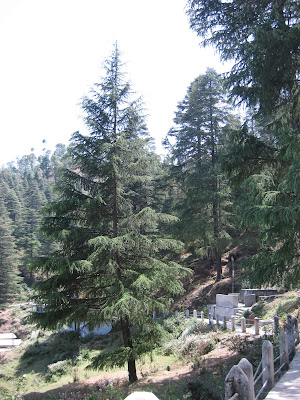 A short walk brought us to the caves which give the area its name, and here were the ASI boards which informed us of their importance. 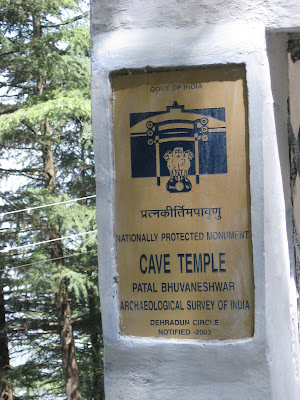 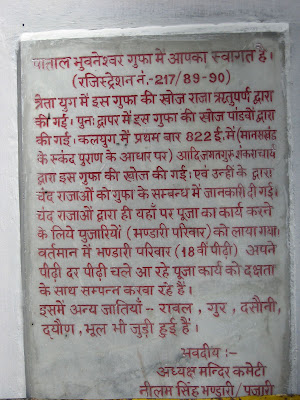 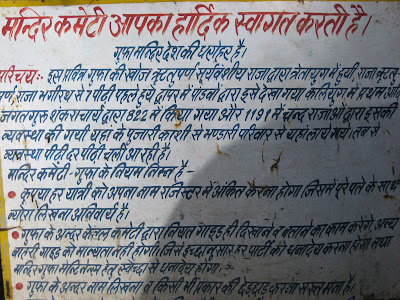 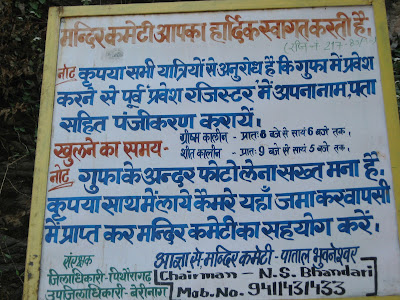