Fun With Lego in Mumbai!!

October 07, 2011
Dusshera has come and gone, but I am not done with my Navaratri posts. There are a couple of interesting golus and lots of pics I still have to share with you, but I am interrupting my Navaratri series to tell you all about an event we attended yesterday. It was so exciting and so much fun that I just cant wait any more to write about it!

Those of you who connect with me on Facebook already know that I was planning to attend the Lego Build a life size Fire Truck Event at High Street Phoenix in association with Hamleys. And all those who have been reading my blog know that Samhith loves Lego. We love to build and are big Lego fans. How could we miss such an interesting event????We set off soon after lunch, and by the time we reached, the Fire truck was almost half done! It was fascinating to see a structure as tall as me built from Lego bricks, and Samhith had to go close and touch it himself before believing that it was indeed built from bricks, and not from cardboard or something else!

The first things we noticed were the displays of structures built from Lego bricks, strategically placed in the courtyard, as well a larger-than-life fireman! Most of the kids were gathered around, oohing and aahing about the buildings, the planes, the ships........ 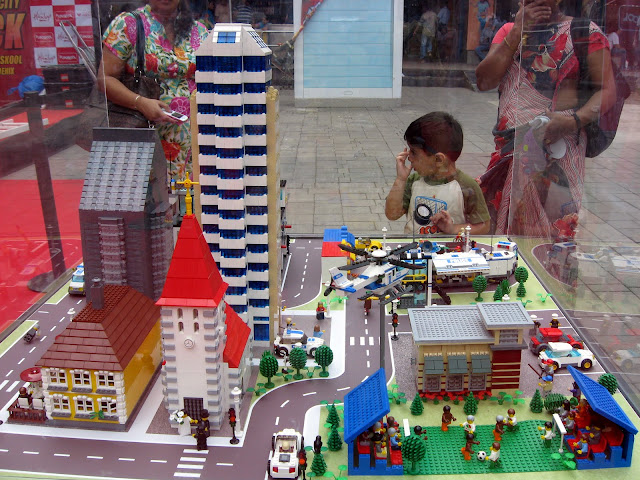 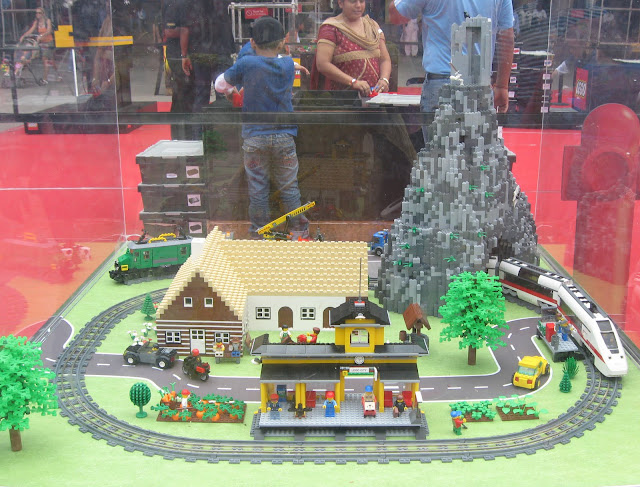 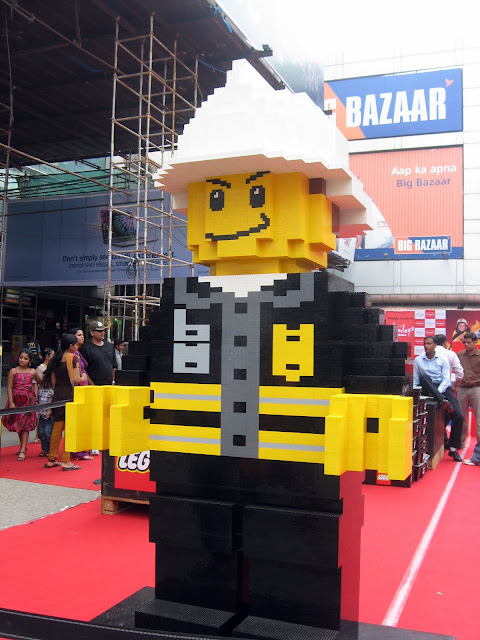 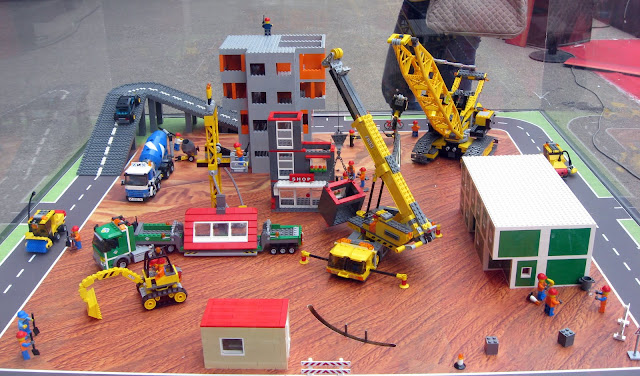 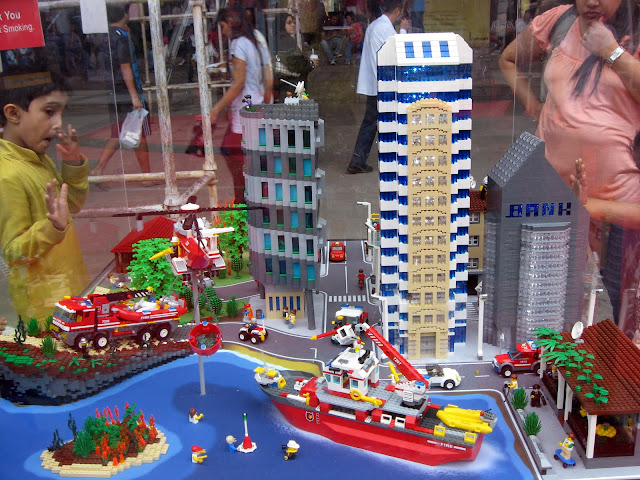 The kids were at first given a free rein, and encouraged to make any structures that they wanted to. Yes, there were prizes too for the best! Samhith set to work, thrilled by the huge tub of blocks in front of him, asking me if we could get such a tub full of bricks at home too!!!!! 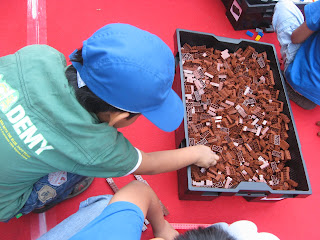 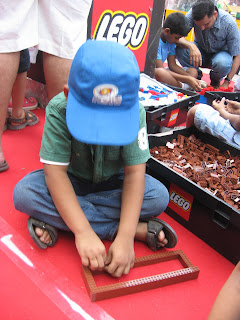 The whole courtyard of High Street Phoenix was soon filled with kids and adults-turned-into-kids, all of them building all sorts of things.... Neither age nor sex was a factor- everyone enjoyed it! 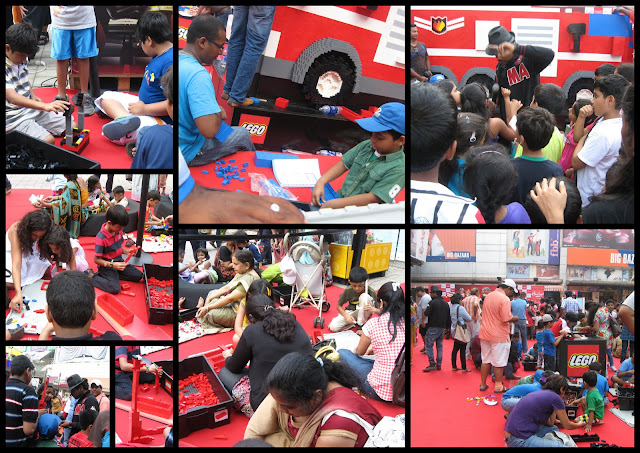 Samhith finally finished his building, which turned out to be a simpler version of the Gateway of India....and yes, he was rewarded too... with a small lego toy as well as a certificate proclaiming him to be a "Juinior Lego Master builder"!!! Need I say that he was thrilled?? 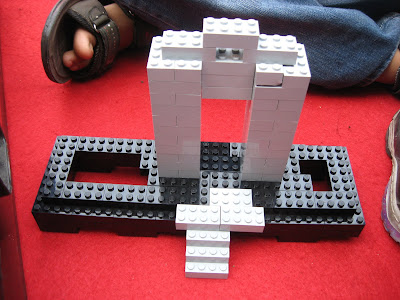 Once the competition was out of the way, it was time for work. The idea was to build a 13 feet high Fire Truck, with around 1,90,000 bricks! How was such a colossal task to take place? By the not-so-simple task of multiplying every unit of the fire truck by 6, making individual units using the basic blocks, and then putting each unit together. Here are some of the bricks to be used for the fire trucks... each of these are made with a number of the regular blocks, and each one of these are the basic building blocks for the fire truck! 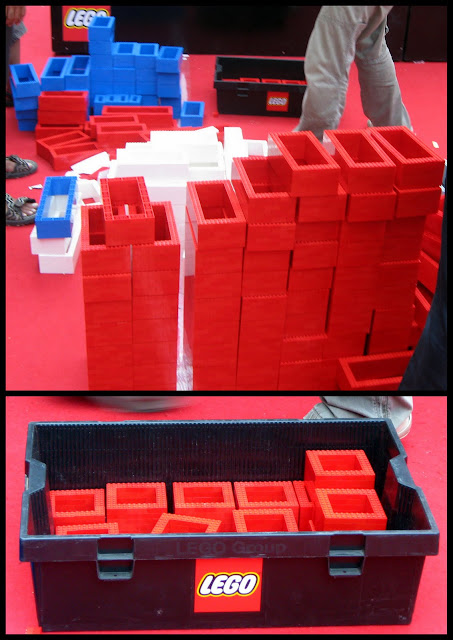 As the enthusiastic participants made these blocks, the  "Lego builders" placed each in its place according to their diagrams, and the fire truck starting taking shape... 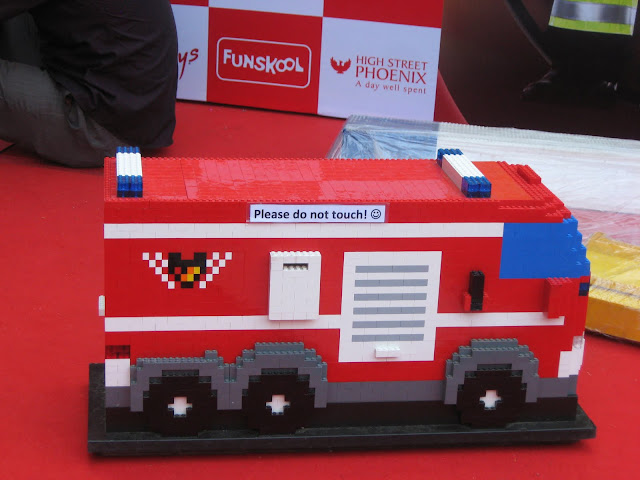 Her is another view of the model... 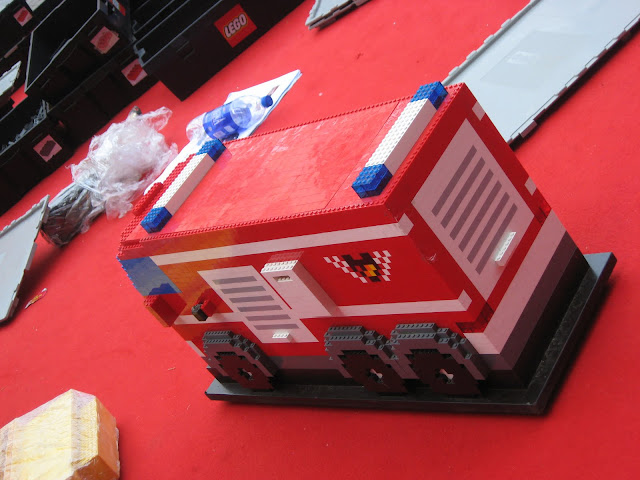 and this was how high the fire truck had grown by evening! 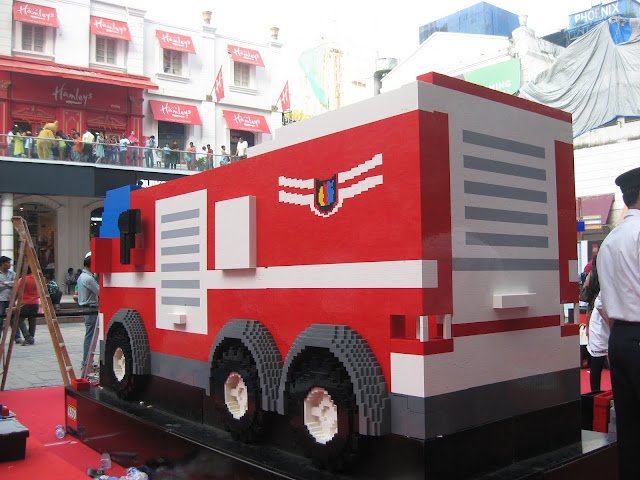 This wasn't all! To encourage the kids further, there was more in store for them. A real fire engine turned up, with real firemen, who spoke to the kids about fire-safety, and more interestingly, allowed them to climb up on their fire engine!!! 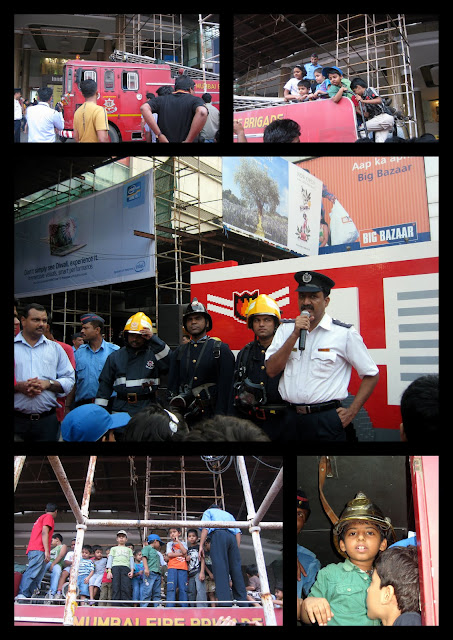 Coming back to the Lego event, I was curious about the men who were assembling the fire truck. It turns out that they are Lego builders, enthusiastic about creating wonders with the bricks, here on invitation from Funskool! This was the first time I had even heard of such enthusiasts!! 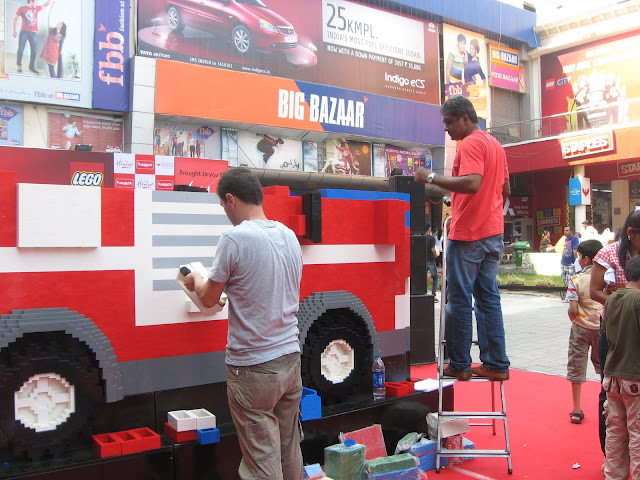 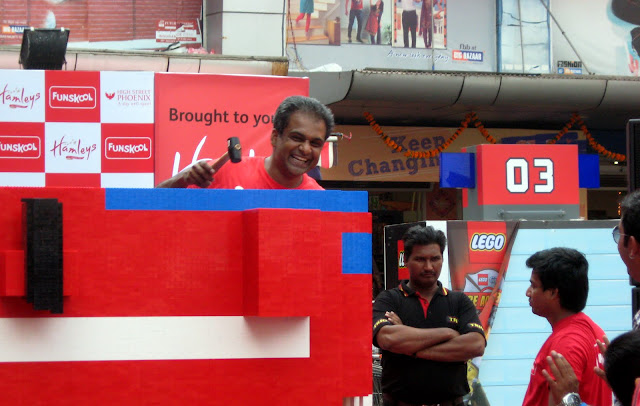 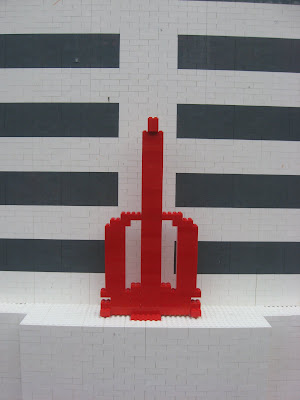 I did speak however, to one among them, an Indian, living in Bangalore, working in a Multinational firm, who builds Lego as a pastime. He was as good as the professionals, and his excitement was contagious! Mr.John Seemon was nice enough to talk to the kids about his hobby, which he says has helped him so much with not just professional skills, but also his social skills! He is a true Lego enthusiast, who owns thousands of Lego sets!! He showed us some of his Lego photos, and Samhith was at once excited by the possibilities. He is planning to start a Lego club, something we are looking forward to, eagerly!!! 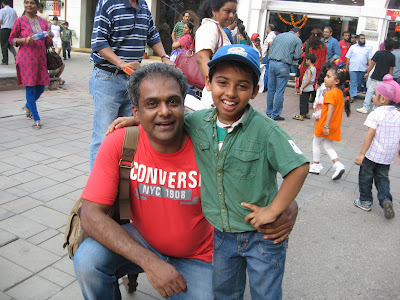 It was time to leave, something we did with great reluctance, because the truck wasn't yet complete! The truck will be ready today (friday) and unfortunately, will have to be dismantled tonight itself, because the bricks have to be on their way to South Africa! What a pity that the three day event had to take place on weekdays. The only reason we could attend was because of the Dusshera holiday! We will look forward to seeing  pics of the completed truck in the papers and on the net.... and just hope that such events are held more often in Mumbai! 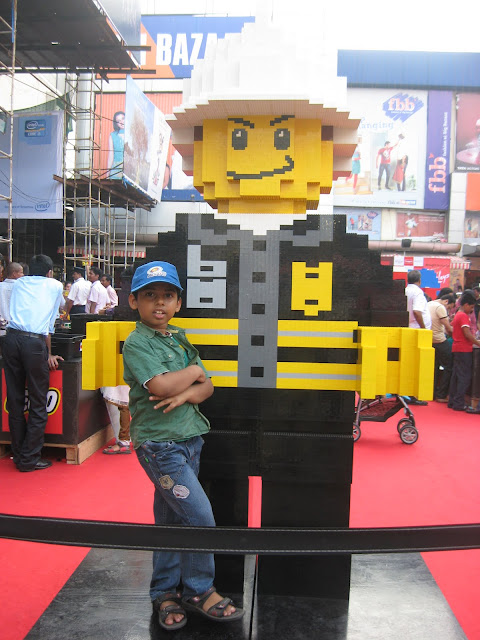