November 14, 2011
The association between Jim Corbett and Corbett National Park is much deeper than just the name. For anyone familiar with Corbett’s books, it is impossible to think of the area without remembering his encounters with man eaters. Even as we wander around the forest, hoping we come across the tiger, we cannot but imagine how it would have been, a hundred years ago, when tigers roamed free, and they were hunted by one and all! The efforts of Jim Corbett and those of his ilk are all the more important and relevant when we realize that in spite of the official count of 164 tigers in the reserve, it is so difficult to see a single one! On my recent visit to Corbett as part of the Club Mahindra Bloggers Trip, we set out in search of Jim Corbett, and what better place to begin that at his erstwhile home, now turned into a museum? 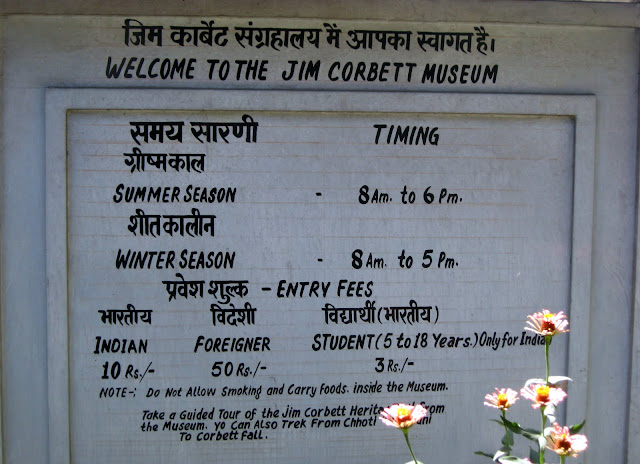 The museum is situated at Kaladhungi, a place which Corbett’s readers would surely be familiar with! Entering the compound, situated right off the highway, we found ourselves in a sprawling garden, in the middle of which we could see the old house….. This is where Corbett spent his winters… sort of a home for the holidays, while he spent the summers at his house in Nainital.. Imagine living in a place like this every winter! 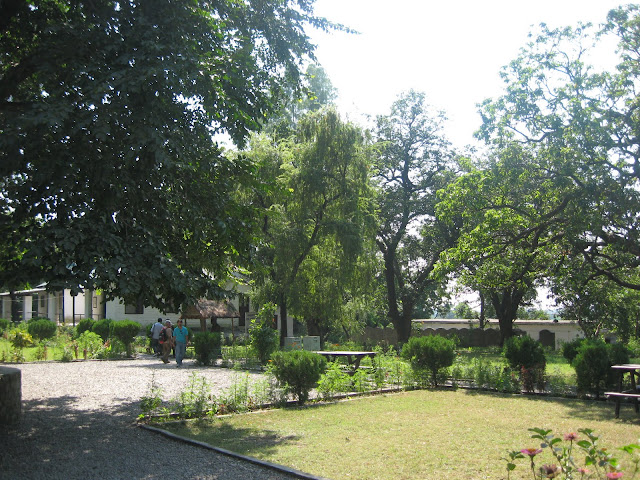 Walking in, we were welcomed by one of Corbett’s well known quotes… 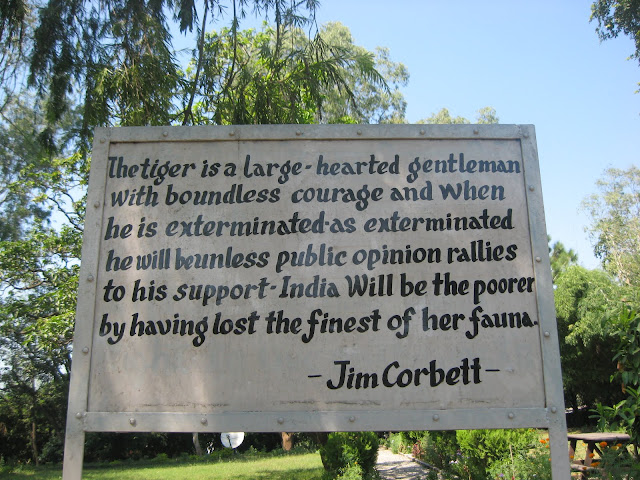 And a bust of the man himself….. 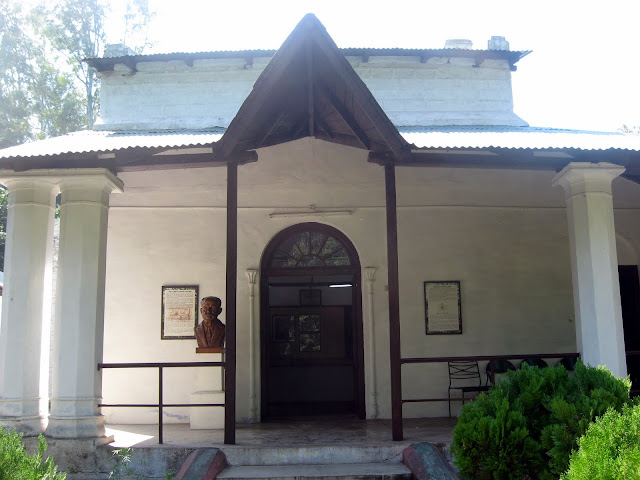 The house is filled with paintings depicting Corbett’s life… and his parents. We learn about his mother, Mary Jane – her first marriage to a Mr. Doyle, who passed away during the revolt of 1857, her escape to Mussoorie from Agra fort with her three children, her subsequent marriage to Christopher Corbett, the new life they started at Nainital, and finally, her resourcefulness in managing a household consisting of 13 children, as well as setting up and running a house rental agency! We also learn about his father, Christopher Corbett, who was himself born in India, at Meerut, began his career as an apothecary in the army, and later joined the Postal service. 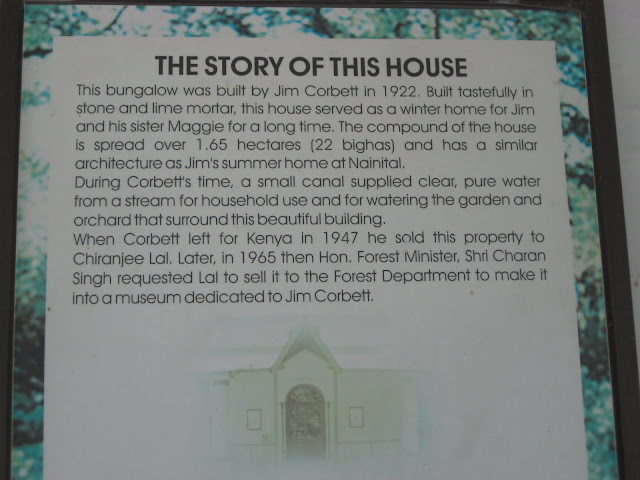 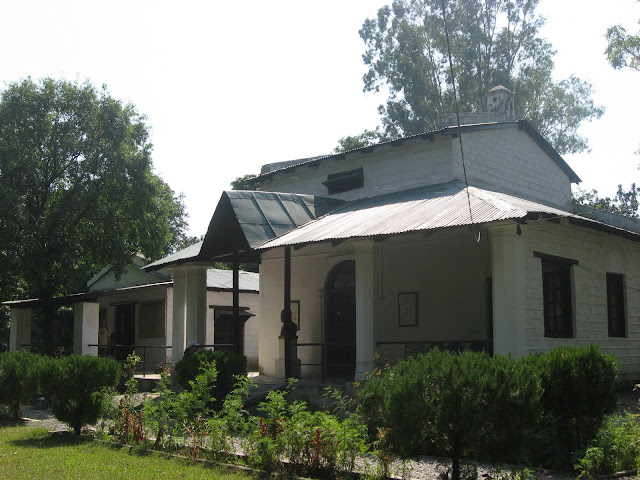 There is lots of information about Corbett too, but nothing out of the ordinary. Most readers of his books would be familiar with his life story. There are maps showing the locations of the man-eaters he exterminated, and statistics about how many men each animal had managed to kill… 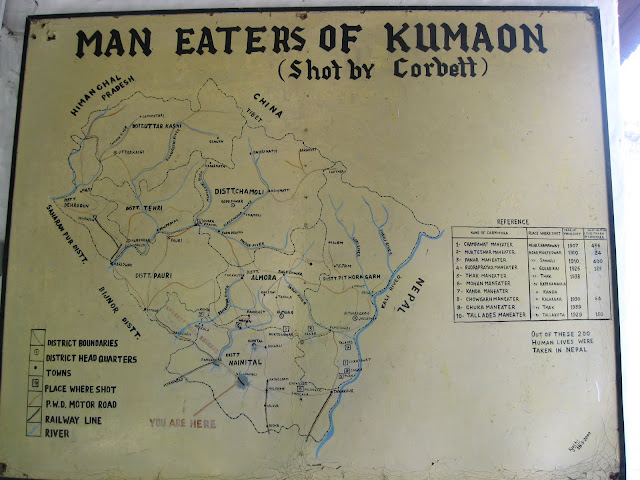 And there is also a piece of paper with Corbett’s notes about one of his books, with his signature. 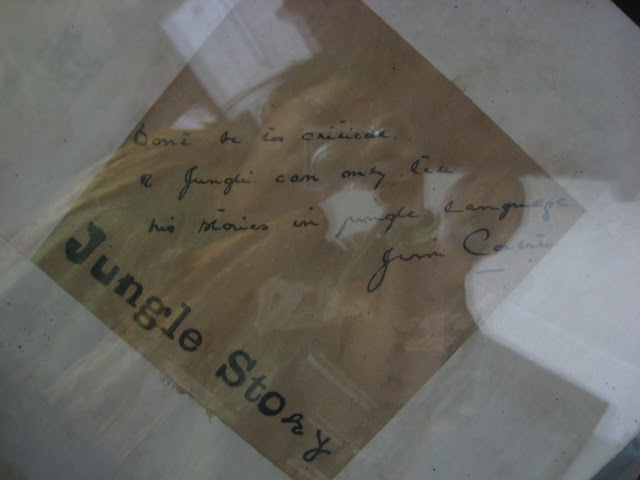 I liked the fact that the museum had information not just about Corbett, but also the men who went hunting with him, and I also liked seeing some of the things left behind by Corbett when he moved to Kenya – such as furniture he had made and the things he used during his life in the army as well as in the railways.

However, most interesting was the village of Choti Haldwani….. Read more about this village on this board from the museum… 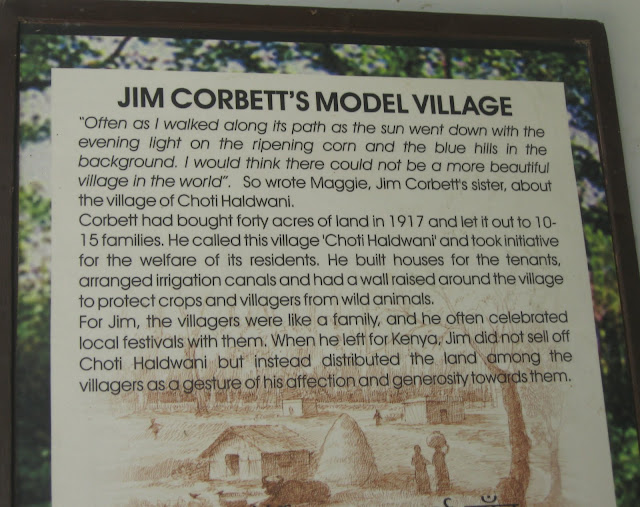 Today, the village is home to an eco-tourism initiative by the Corbett Gram Vikas Samiti. So now, you can stay at a homestay in the village, eat authentic rural cuisine of the Kumaon, go on a Corbett Heritage trail, visiting his haunts in the area, and go birdwatching, or even simply trekking inside the jungle! We wanted to go on the Heritage trail, but unfortunately, time did not permit! If any of you have been here, please let me know how it was. If you want to go on such a trip, check out their website – http://www.corbettvillage.in 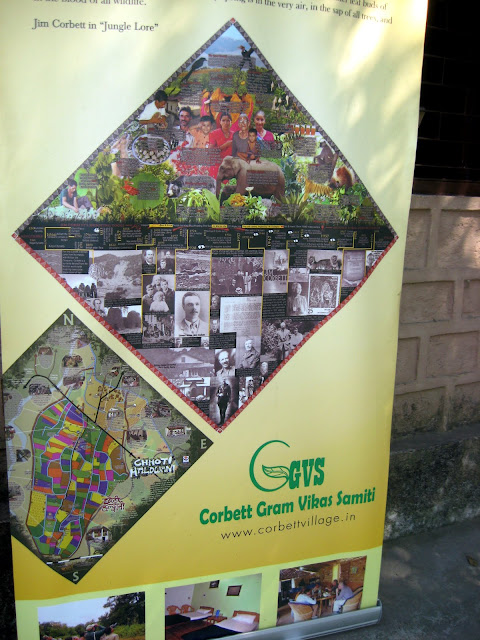 Our final stop at the museum was the souvenir shop. My eyes of course went straight to the book rack from which I returned with books for both, Samhith and myself. But there was more… such as T shirts and jackets…. 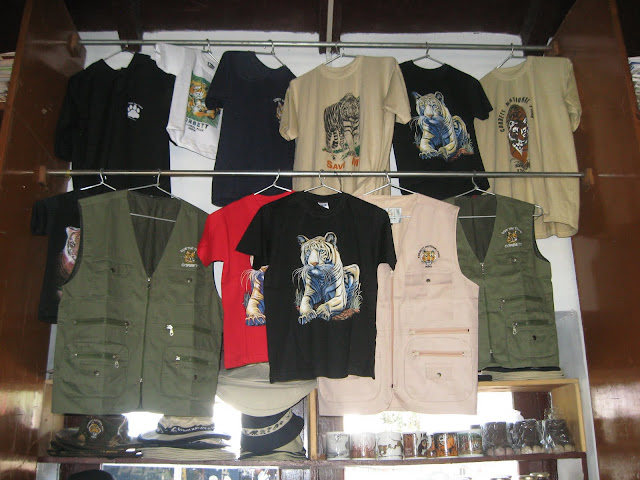 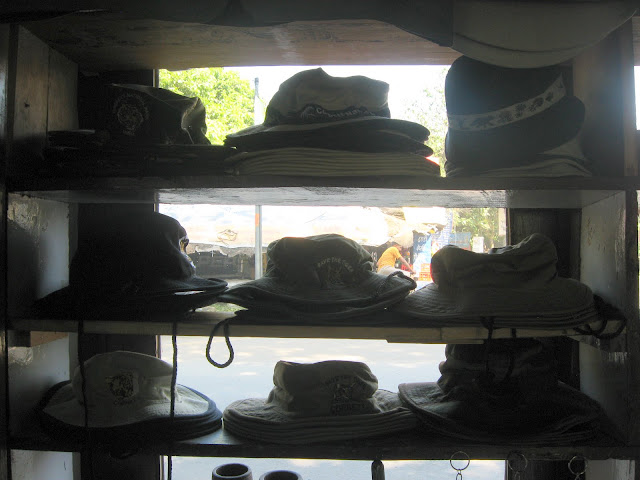 Pen stands with tigers on them, 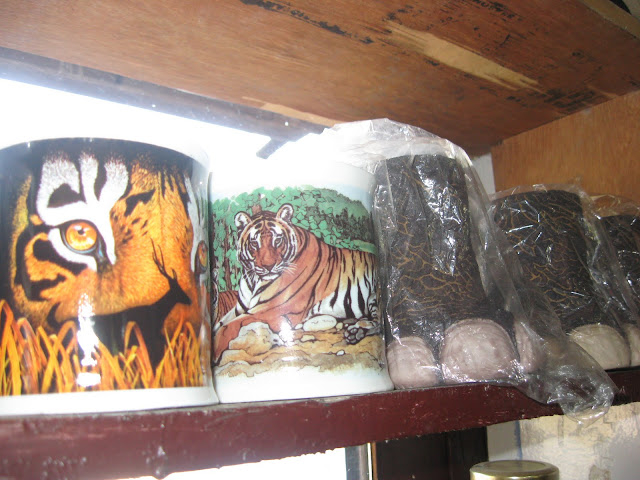 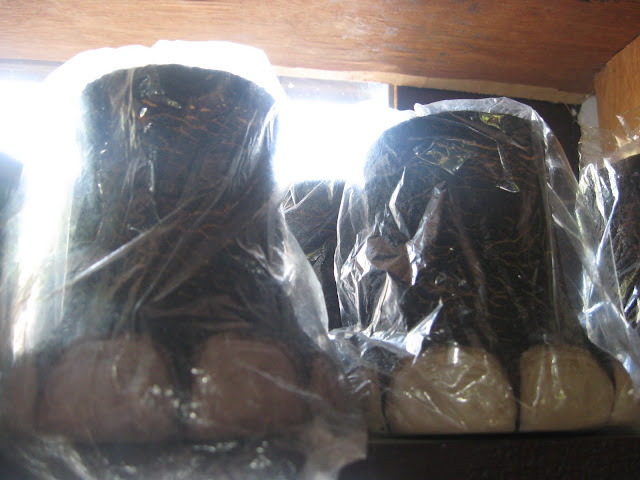 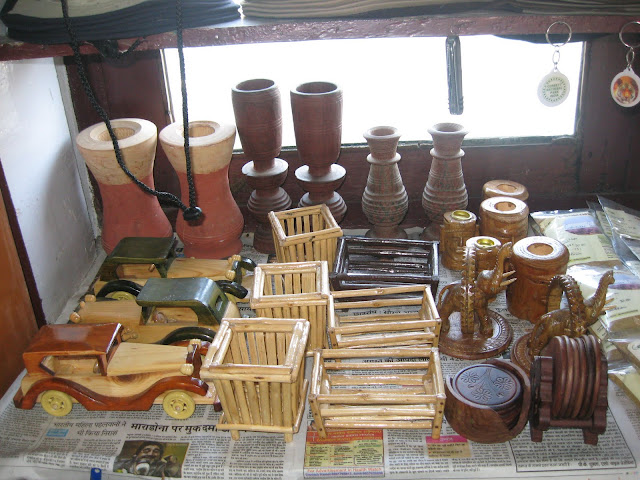 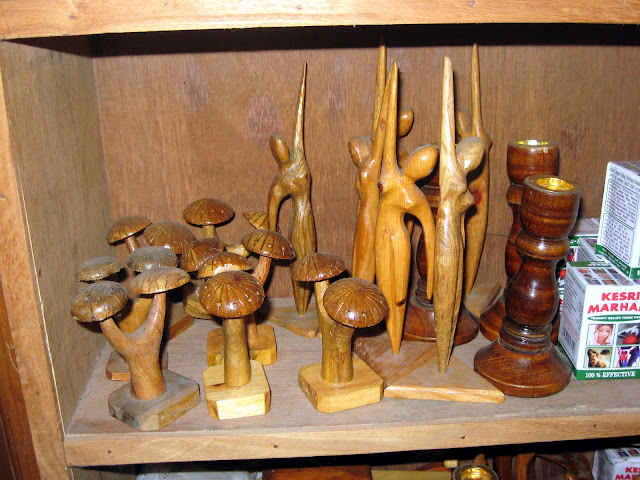 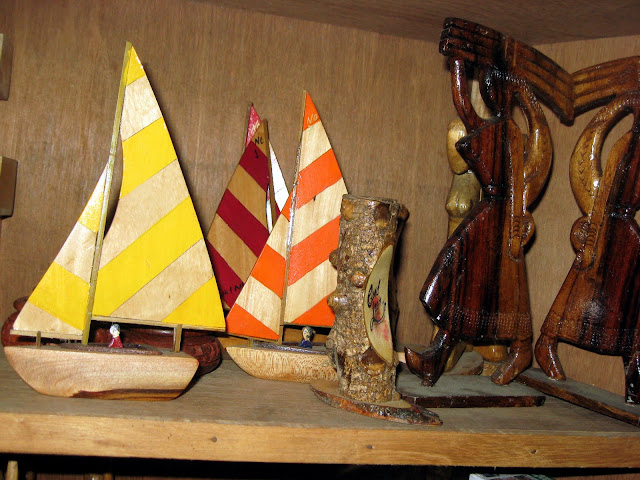 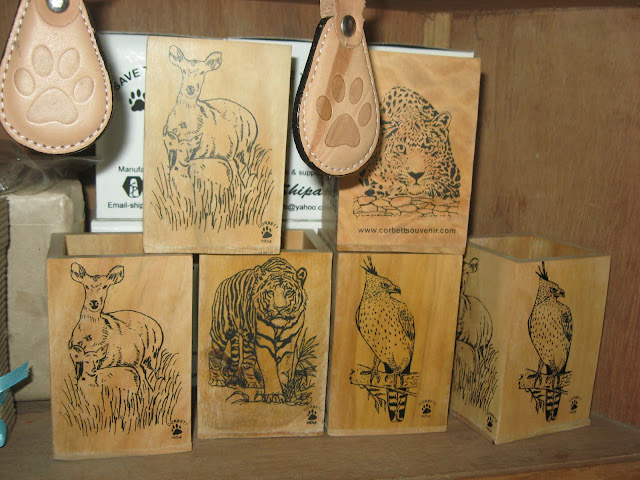 I loved these…. Stuffed toys, made not just of fur, but also jute, and hats made from leaves! 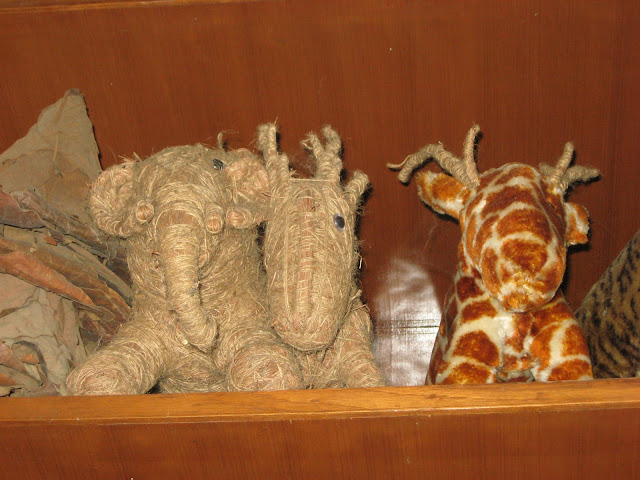 The museum is simple, though the house is well preserved, giving us a peep into the life and times of Jim Corbett. For the duration of our visit, I was transported into one of his books, remembering references to his parents, his friends, his tenants, but above all, the ‘large- hearted gentleman’ who features so predominantly in his  books – the tiger!