March 23, 2014
The double decker buses of Mumbai have a long and glorious history. They were first tried out in 1937 to cope with the rising number of passengers, and they were soon a success. How could they not? They not only accommodated more people, but the thrill of riding on the upper deck, seeing the city from a different angle would have been a big incentive too! More than 75 years down the line, double decker buses are on their way out, thanks to the increased traffic on the roads and the fewer number of people using the buses. However, the charm of travelling by these buses remains the same. They still give you a different perspective of the city, especially when the bus is a roofless one! 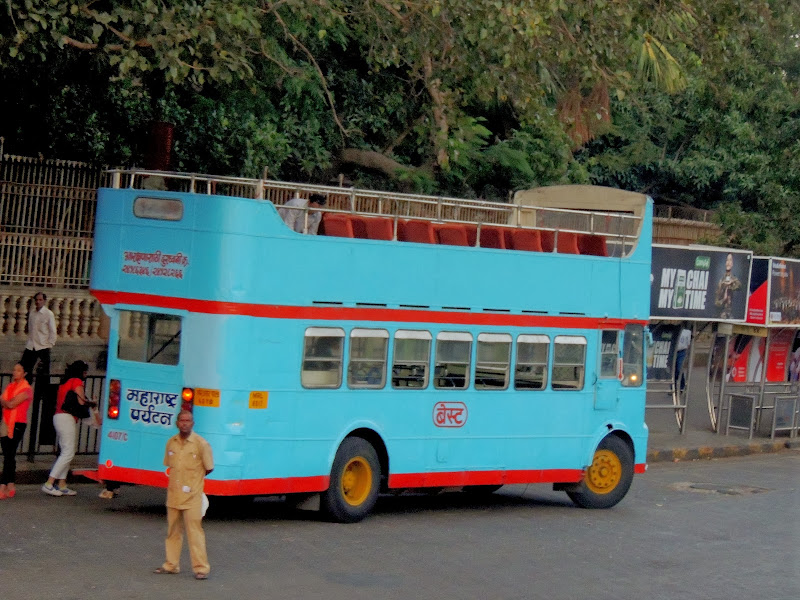 ‘Nilambari’ is the official open decker tourist bus, run by the MTDC, and, on Saturday and Sunday evenings, you can take a ride through Colaba. We have been on this bus before, but were disappointed that it was such a short ride, especially as there was so much more to see around! Which is why, when I was invited for a bus tour through Churchgate, Fort and Marine Drive by Audio Compass, I signed on at once!

The tour began at Churchgate station, and took us through Fort, passing by the Asiatic Library to Regal Cinema, along the Colaba Causeway, and then along Marine Drive, all the way to Chowpatty. This is one of the most interesting areas of Bombay, with the Gothic, Indo-Saracenic and Art Deco styles constantly competing for attention, so instead of talking any more about it, let me show you some of Mumbai's landmarks, from this different perspective!

Let me start with this view of the Western Railway Headquarters, right opposite Churchgate station... not the view seen from ground level, is it? 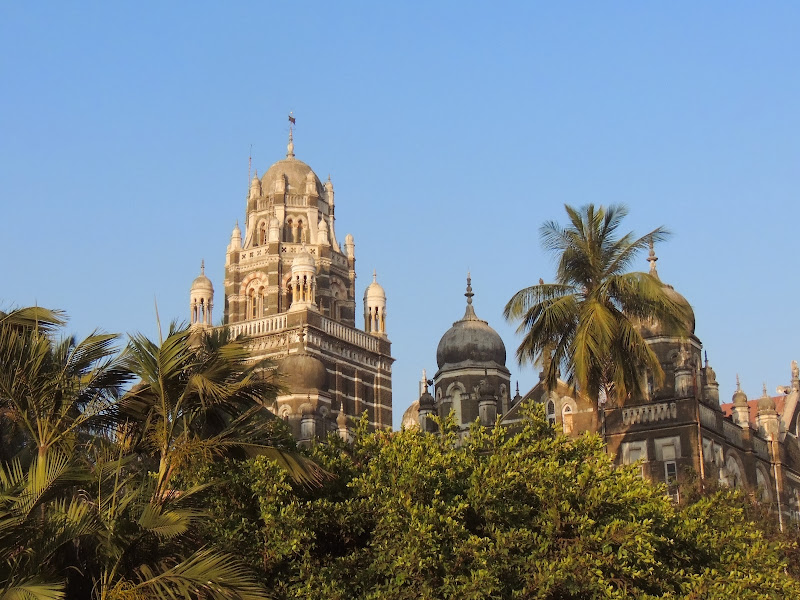 The Art Deco facade of Eros Cinema is a familiar sight... 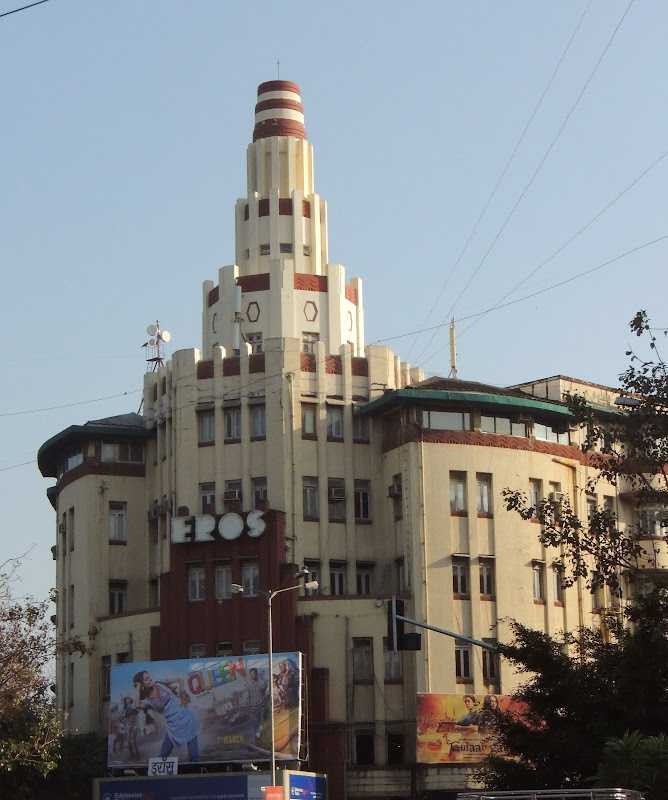 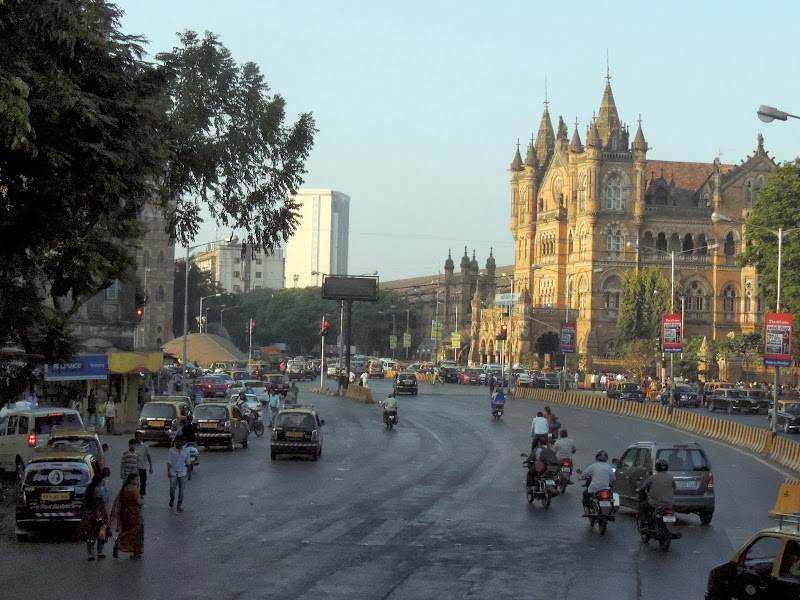 Our vantage position helped take our attention away from the crowd below to the beauty above... 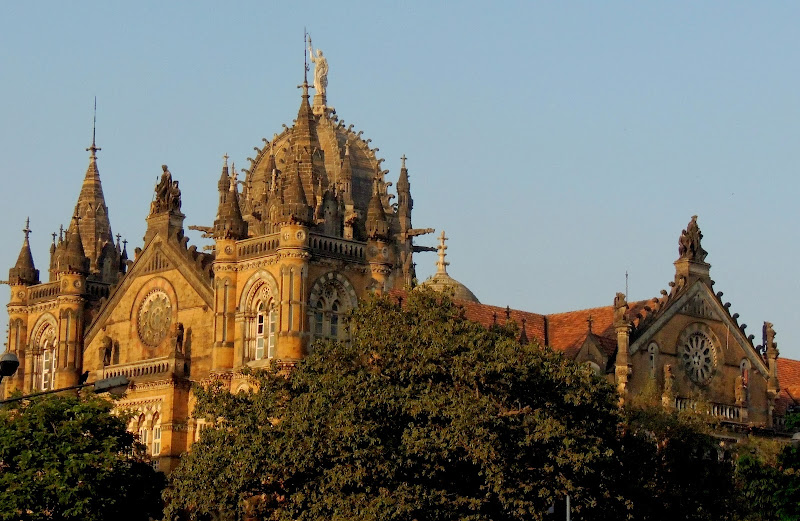 And the statue of Progress that stands atop the dome, whom, to be frank, I had never seen quite so clearly ever before! To read more about her, and the other statues who give her company, click here. 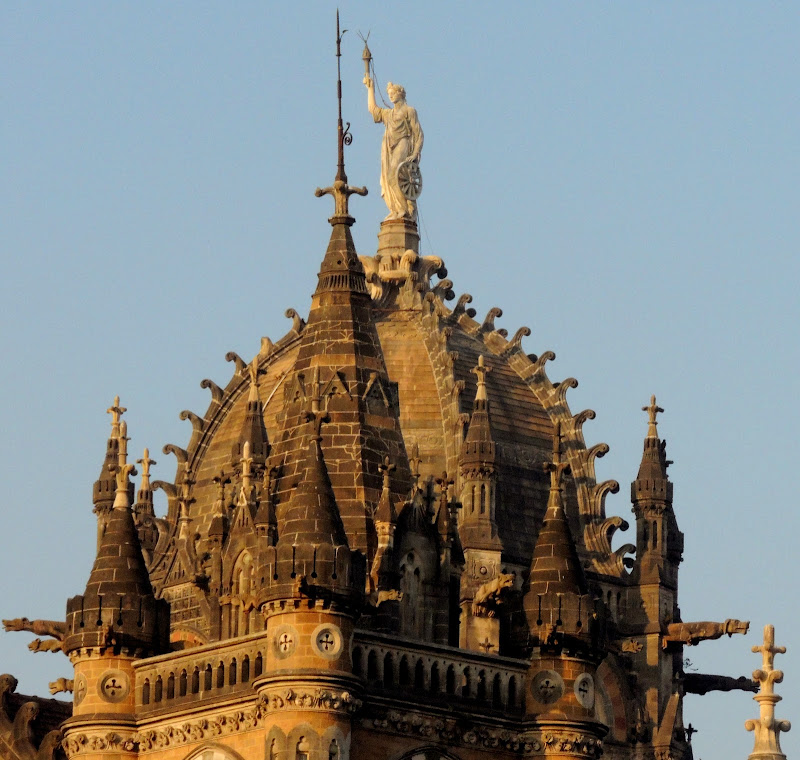 Further down, is the GPO, or General Post Office...about which I have written before, here. Again, our vantage position gave us a good look at the dome, which otherwise, can barely be seen! 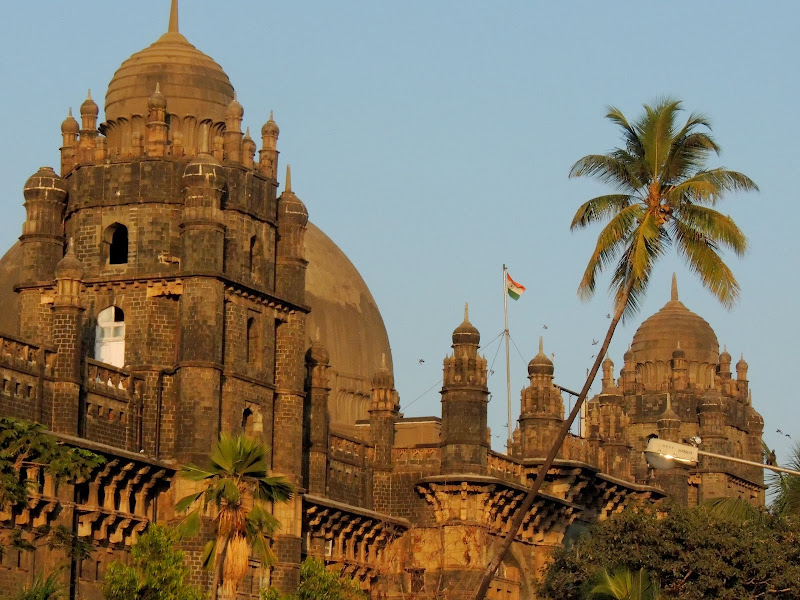 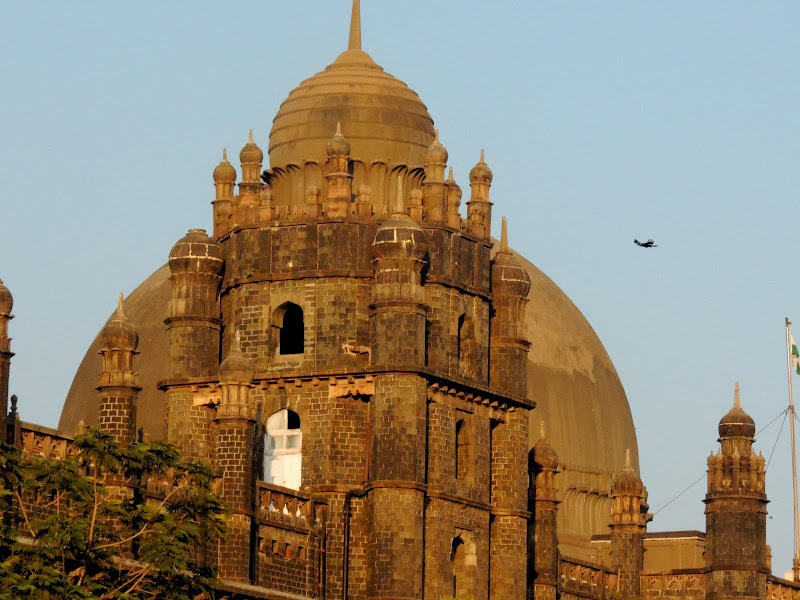 Further on, at the intersection of Mint Road and PM Road, I finally got a chance to click this guy - whom I have always thought of as 'the man with the book'. He stands atop a fountain built in his memory by his father, Ruttonsey Mulji. 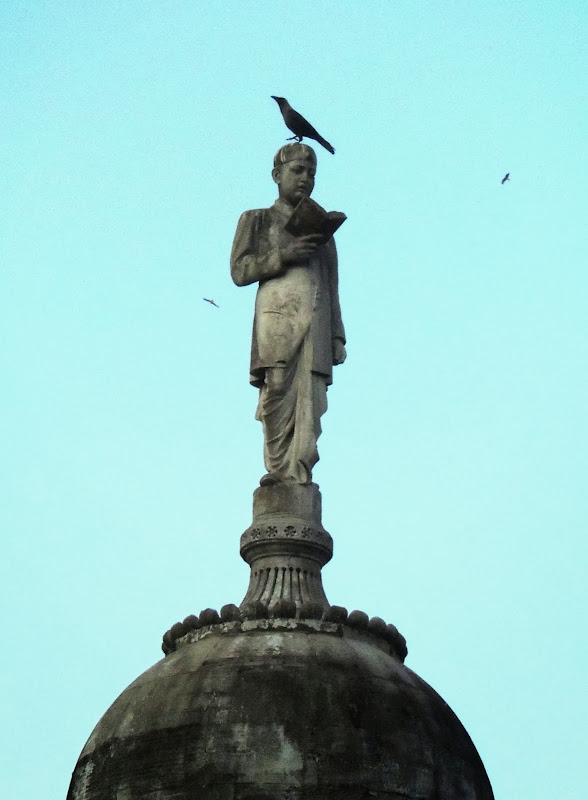 We passed by the Asiatic Library... Did you know that the library has one of the only two known original copies of Dante's 'Divine Comedy'? I certainly didn't, and now am wondering if there is any way I can get a peep into it! 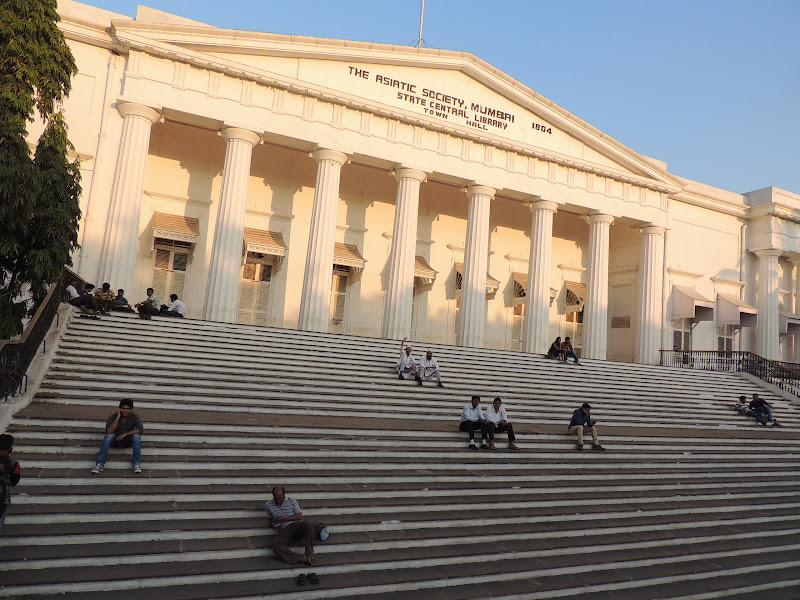 The Cama Oriental Institute is just across the road, but I had no idea that this was Bombay's first Ice House!!!! I wonder if they will allow me to enter and take a look around? 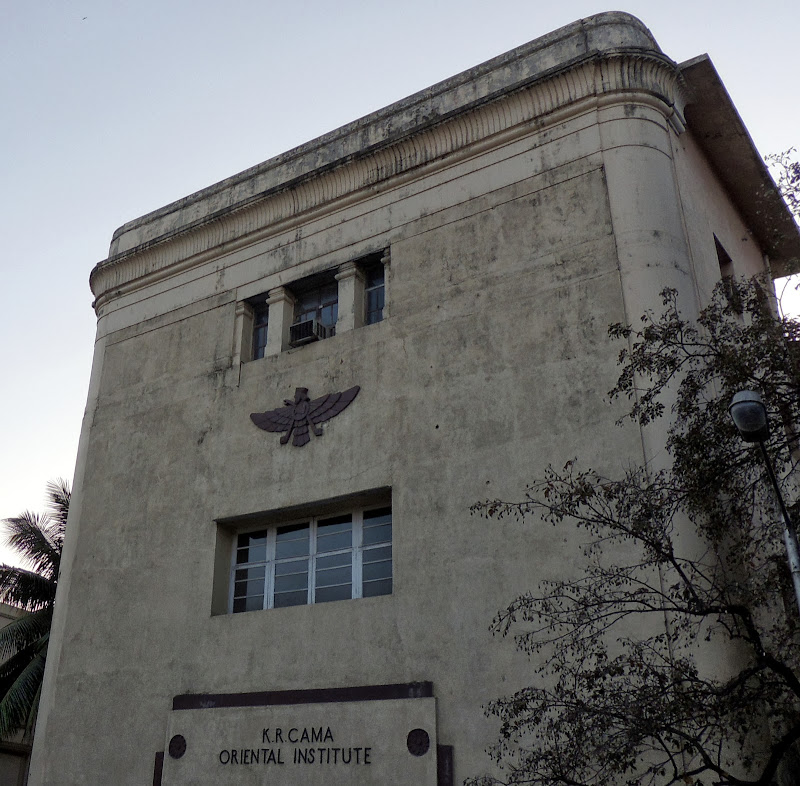 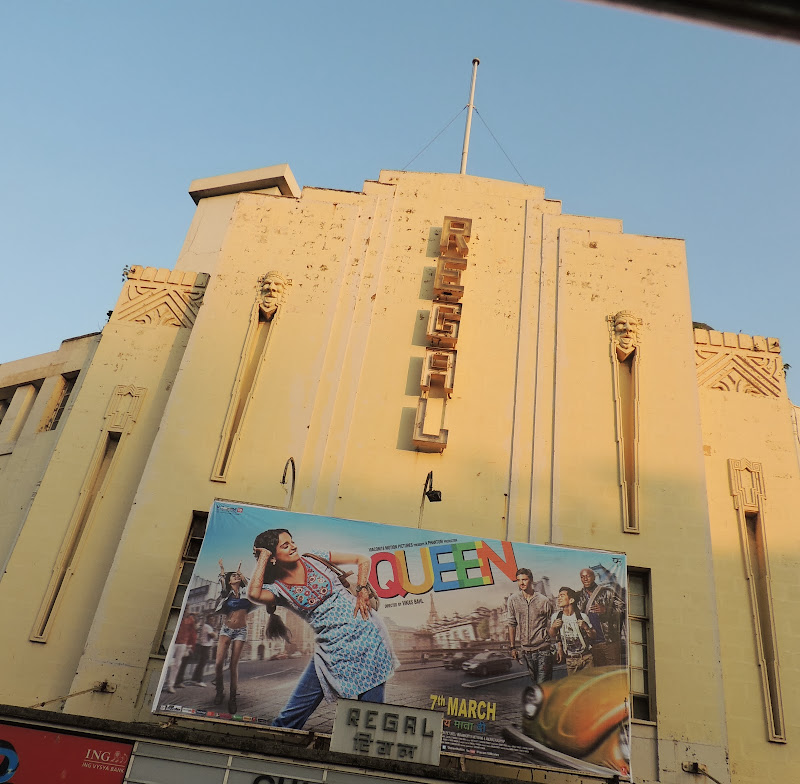 And realized once again, just how many details I had never noticed before, such as this! 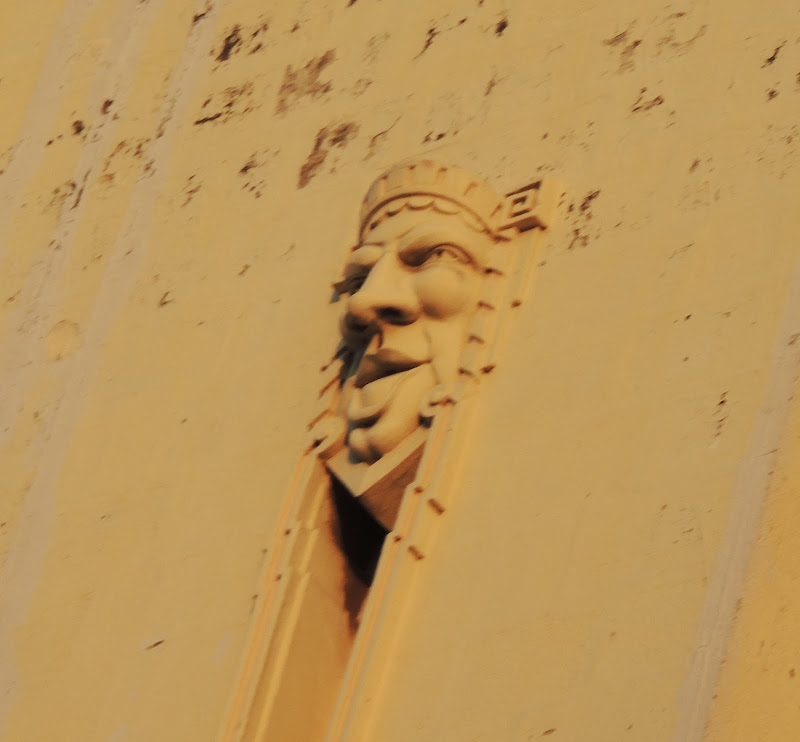 When it came to the Sahakari Bhandar Building right opposite Regal, my eyes had never gone past the canteen on the ground floor. Again, the new perspective showed just why the erstwhile Majestic Hotel was so named. Yes, this was once a hotel, known for its opulence and grandeur. Today, it is used as a hostel for the Legislative Assembly. 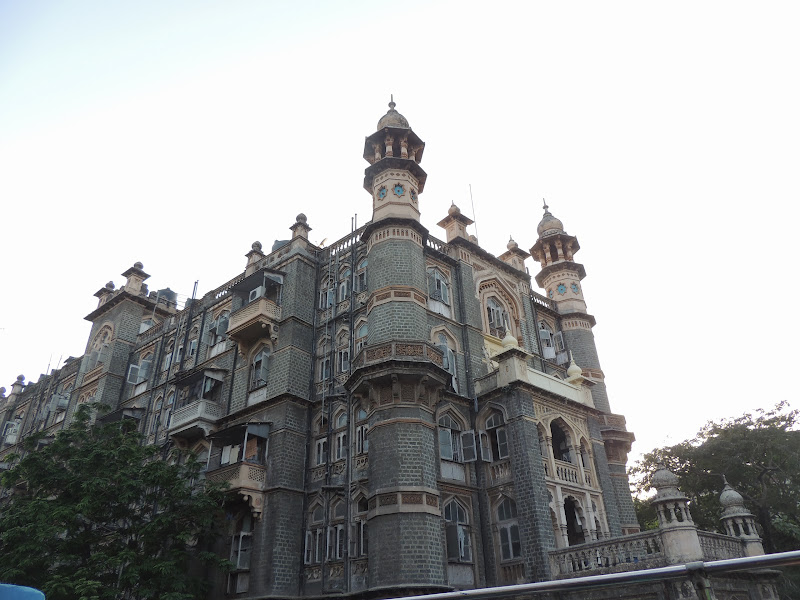 Cruising along Colaba Causeway, we had intended to go all the way to Afghan Church, but apparently, these buses aren't allowed there, so we turned and made our way back, towards the museum, and opposite, the Elphinstone College. Interestingly, the college is named after Mountstuart Elphinstone, the Governor of Bombay from 1819 to 1827. On the facade, however, is the face, not of Ephinstone, but Sir Cowasjee Jehangir, a prominent member of the Parsi community, who provided the funds for building the college! 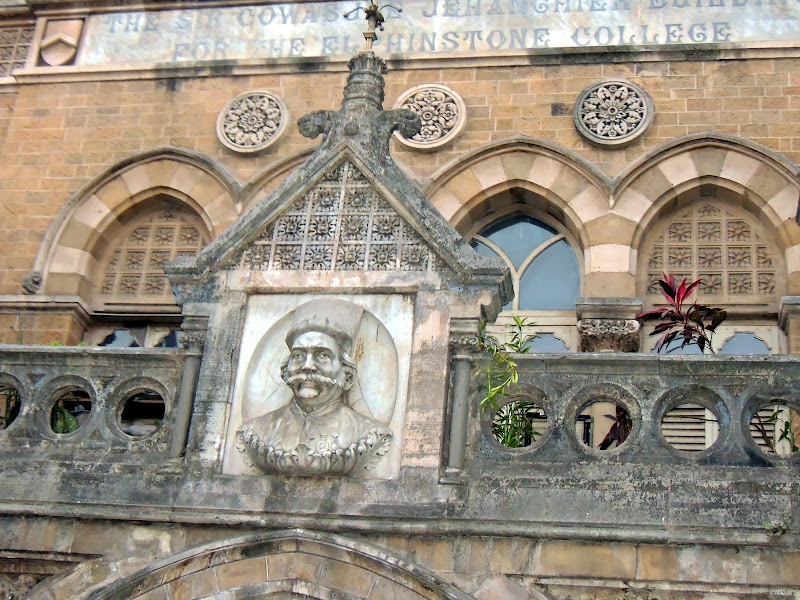 Making our way towards Marine Drive, all eyes turned towards the only revolving restaurant in the city - the Pearl of the Orient, which is part of the Hotel Ambassador. 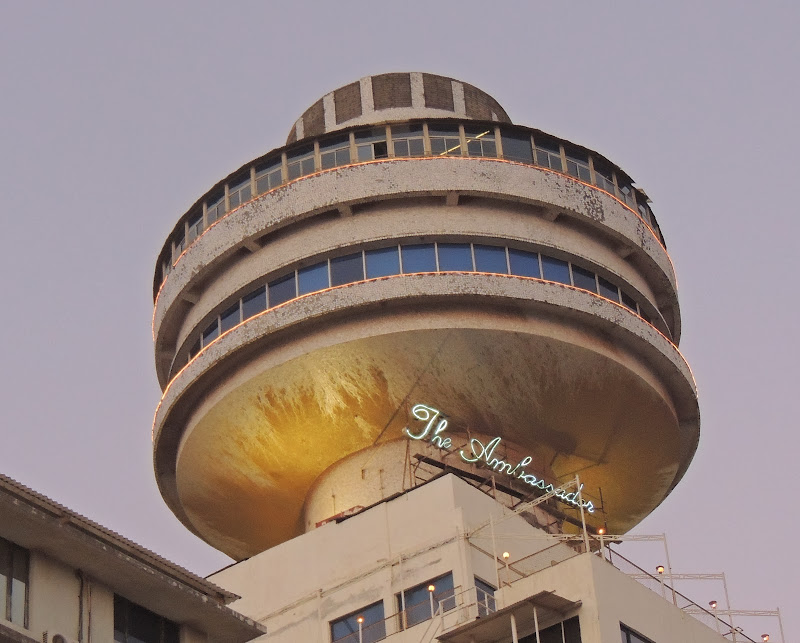 On Marine Drive, the sun setting behind the Mumbai skyline is a sight I will never tire of....

And even the crowds only add to the atmosphere, their silhouettes an interesting addition to the silhouettes of the skyscrapers behind them..

At Chowpatty, for once, it wasn't the beach which grabbed our attention, but the jetty of the Water Sports Complex! 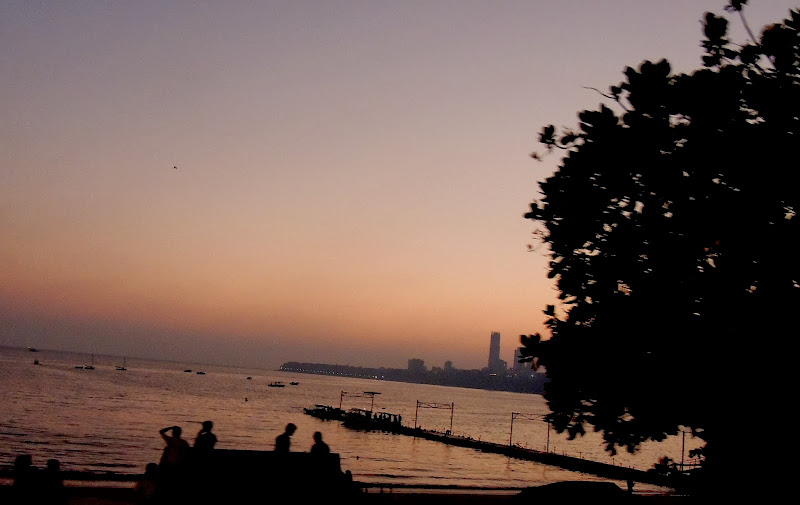 And that is where our tour ended! The reason for the tour was the launch of the new AudioCompass Android App, and, as you already know, I am already a big fan of audio guides. We lose no opportunity to use them at museums and heritage structures, so an app to help explore cities is a welcome addition. The app is informative, having quite a few details I was earlier unaware of, and the map is certainly helpful in finding our way around the busy area. It is quite evident that much research has gone into it, and I can only commend such initiatives, and hope they cover more areas soon!