September 11, 2015
Driving through the mountains, I looked out eagerly for my first glimpse of the river. A sharp turn, and the bluish green waters came into sight. I asked the driver to stop, and he did, a little later, at a convenient spot. I just had to get off, and stare at her. Unbidden, tears sprang into my eyes, and I brushed them away hastily. It was an emotional moment, after all, I was setting eyes on the Ganges in Rishikesh, after a gap of over 25 years! 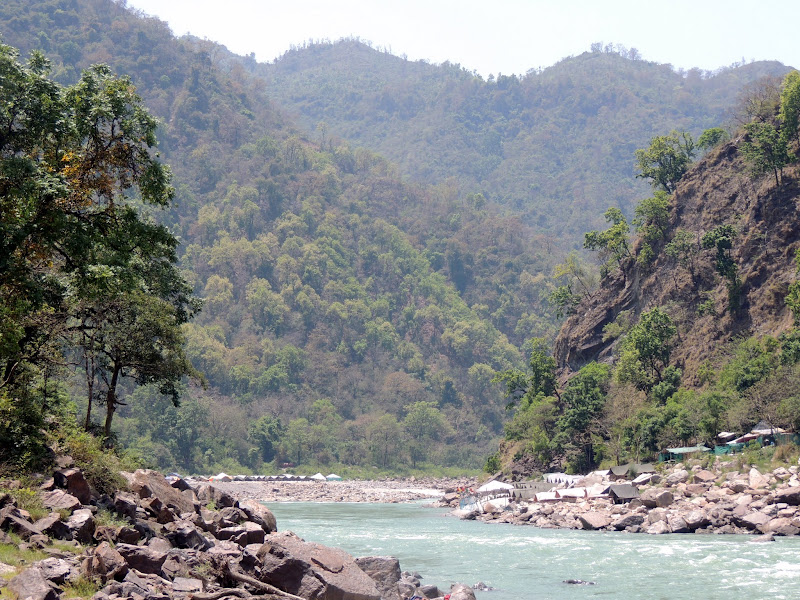 I was a teenager when I last visited Rishikesh, with my grandfather and his friends. It had then been a pilgrimage, to the holy sites of Badri and Kedar, apart from numerous other temples. Tears welled up again, as memories came flooding back, and I thought of how different it was, this time. Now, I was a mother, with an almost-teenage son in tow, and we had no intention of visiting any temples! Above all, I was here on an invite, to experience camping by the river, and try our hand at some adventure sports!

I had been invited by Abhay Sharma of Ravers’ Expeditions and Pahadi House to come and experience another aspect of Rishikesh. This, the first half of our stay was all about the river. We were to camp on the banks of the Ganga, at the Ravers’ Beach Camp. The second half would be the experience of a homestay, in a village. But, more of that later. Let me get back to our journey…..

Our drive to the beach camp took us along winding roads, the river always just within our sight. A few camps appeared now and then, but we drove on… I was surprised to see so many ‘beach camps’ along the Ganga. Evidently, adventure sports and camping were a lot more in demand than I had imagined! Eventually, we drove down a rocky path and came to a standstill at the riverbank. But where was the camp? 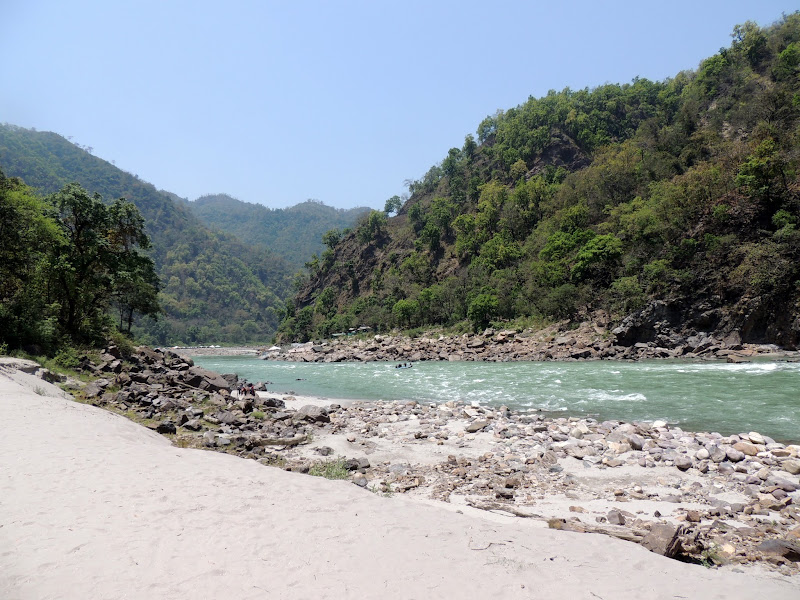 Our driver pointed to a plank over a rivulet, and asked us to go on. With a sense of adventure, of walking down an unknown path, we followed the trail, our driver following us with our luggage. We seemed to have left the sounds of the highway behind. There were no vehicles, and no human voices. The only audible sounds were the river gurgling and the birds chirping. For once, I did not need to tell Samhith to be silent. He sensed the peace, and responded instinctively, as children do, running ahead, looking around in wonder, and of course, picking up stones! 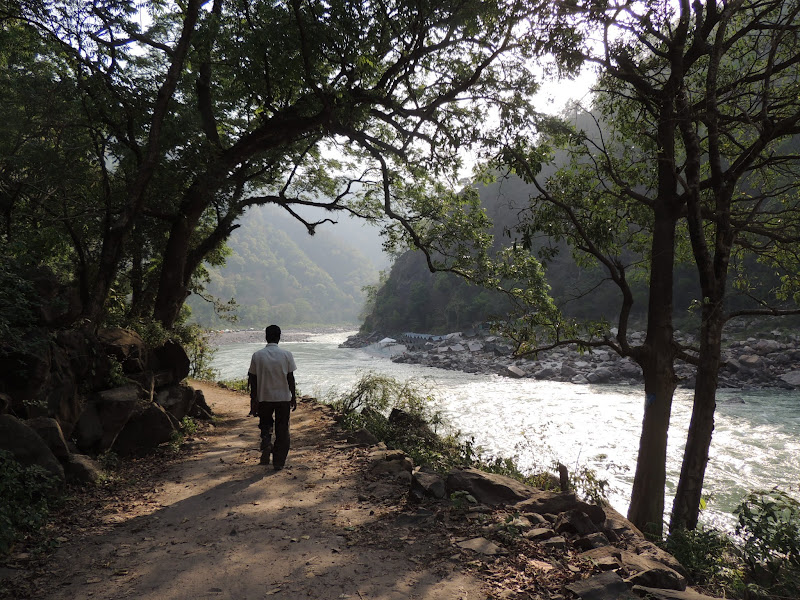 A few minutes’ walk brought us to the camp – a collection of tents, some looking over the river, some around a clearing. It was a weekday, and we were thrilled to see that we were the only guests! Choosing one of the tents by the river, we settled down to enjoy ourselves, in complete solitude! 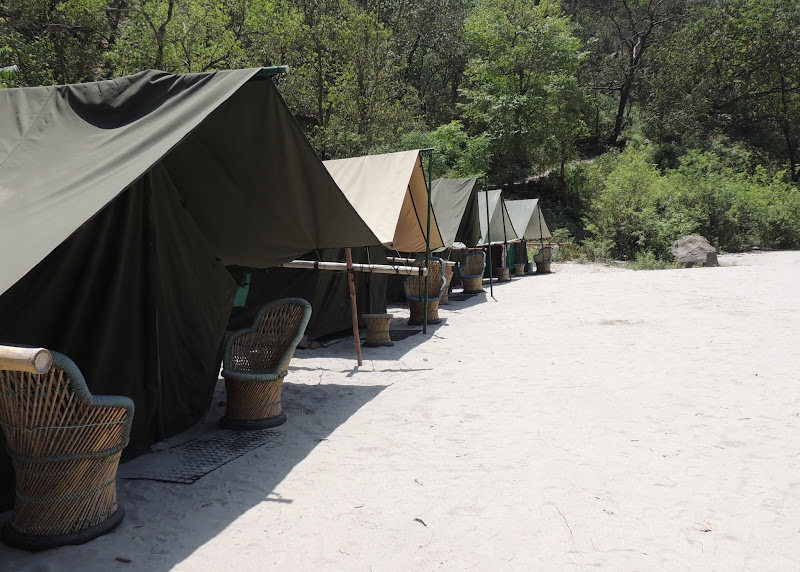 Before I go further, I must admit, that I am not really an adventurous person, (as those of you who read my blog regularly will already know). Plus, I have never really gone camping. That is to say, I have stayed in a tent, but those were almost rooms by themselves, with attached toilets and all. The tent we stayed in this time, had three beds, but the toilets were in a separate enclosure. It was a new experience for me, but not for Samhith, who has camped with school before. I wondered briefly how I would manage, but as it turned out, our excitement overcame any and all worries we had. The resort being empty helped too, and we proceeded to have the most fun we had on our #summertrip so far!

So, what did we do? Well, with the river so close, what do you think we did?

We spent almost all our time at the resort, in the river, or on her banks. While Samhith swam and played happily, sometimes with the young boys of the staff for company, I enjoyed the experience of being by the Ganga, and seeing her so pristine and clean. I can’t swim, so I stayed well near the shore, while he indulged himself, spending hours in the water, refusing to come out even for meals!!!!

The staff rustled up simple but delicious meals for us, which we polished away happily, hungry as we were, after so much time in the water. And then, while not in the river, this is what Samhith did….

The hammocks were a big hit, and with a book in hand, what more did we need?

At other times, he ran around, trying to count the butterflies… 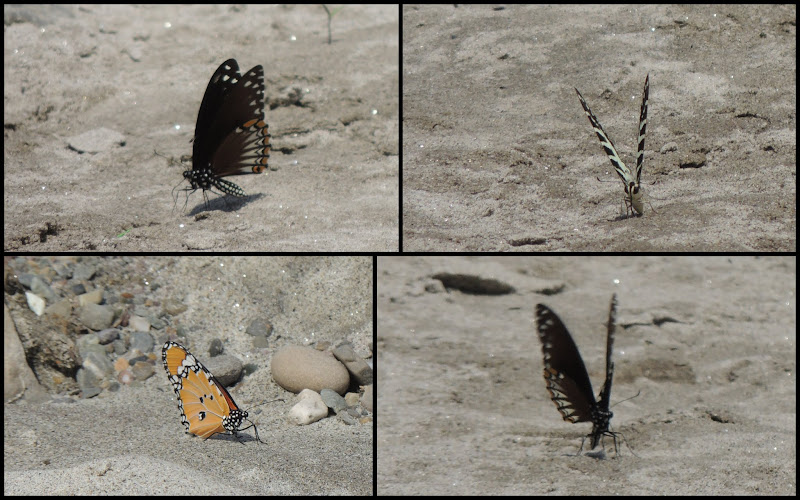 Or search for spiders (his favourite creatures to spot!) 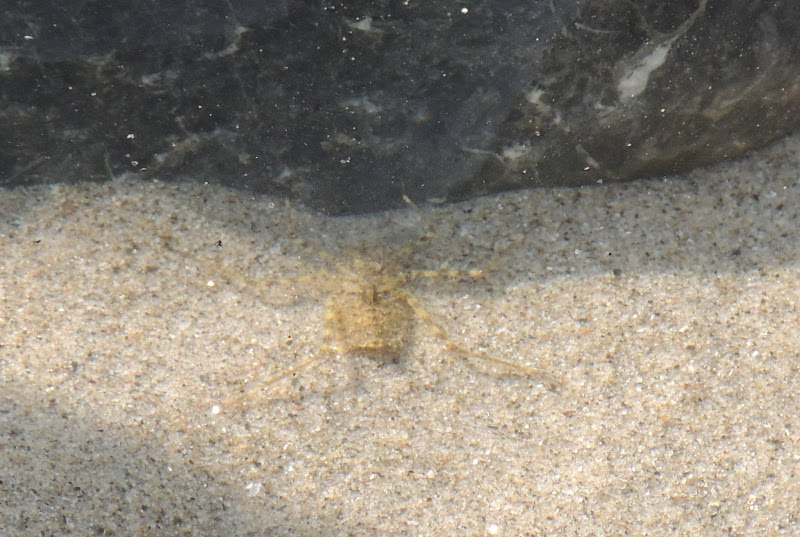 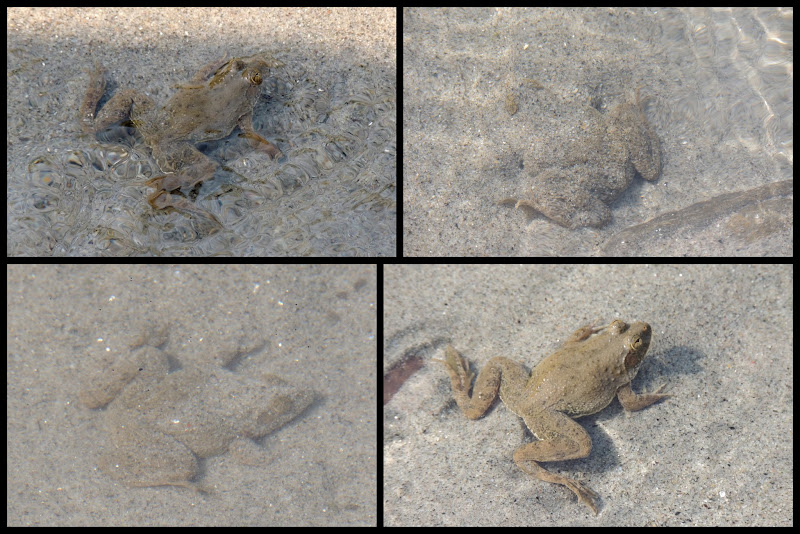 They surely would have been irritated with him, for rousing them from their comfortable, camouflaged existence!

Samhith was very excited at the prospect of trying out some adventure sports, especially since it happened to be his birthday the next day. We were, unfortunately told, that he could only try River Rafting, since he was too young for the other activities. Plus, since I was too scared to try it, he had to join another group. Of course, he had no issues with that, so off he went, with a family group, for his first River Rafting experience, on his 12th birthday!


The rafting experience, from the camp to Lakshman Jhoola, was apparently great, though I have no photographs. For the rest of the day, we all heard stories of how he jumped off the raft and swam alongside it for a while, and how well he managed to stay afloat in spite of the current…. And so on … and so forth…. And, now that he has tasted the adrenaline rush of adventure sports, he wants more of it! He has already tried to excite his cousins into joining him for another trip soon, to Rishikesh, so they can all go rafting, together!

So much for inciting a love for adventure sports. That was the main idea of the trip, and once completed, we felt a little more inclined to look around, and do the usual things everyone does, at Rishikesh. While I decided to leave the temples for another visit, we wandered around a bit, taking in the sights at the Ram and Lakshman Jhoolas, where the vistas seemed to be very different from those I remembered!!!

Another aspect of Rishikesh that I enjoyed seeing, were all the cafés that had sprouted. Yes, yes, I know they have been around for long, but remember, I haven’t been there since I was a kid! Considering that we only spent a few hours in the town, there wasn’t time to try much, but we had a pleasant surprise when we entered the Café Karma for lunch, and saw this….

Its so nice to see a library in a hotel! And free WiFi to share the image 😀 @TSBookClub @sudhagee pic.twitter.com/RBRQ7nFGCo
— Anu Shankar (@anushankarn) May 6, 2015

A library in a café! That too in an old fridge! That was enough for me to fall in love with the place! The library, as always, was a conversation starter, and I had a great time chatting with the owner, who happened to be there, working. As for Samhith, he gorged on their awesome pancakes, and his day was made! Is it any wonder, that he has been recommending Rishikesh to everyone since then?


A late lunch is even more appetising when it looks like this. @sudhagee @TSBookClub pic.twitter.com/GQ6MYbqogD
— Anu Shankar (@anushankarn) May 6, 2015


Moving on with our trip, on the advice of our guide, we did go attend the Ganga Aarti. This was a new experience for me, since it wasn’t so prevalent when I had visited last. We found ourselves a place on the steps of the Parmarth Niketan Ghat, and settled down to see what it was like.

The Aarti itself wasn’t a great experience. It did not inspire any spirituality in me. However, what did impress me, is this young man, whose job it was, to stand looking at the river, and, with his long pole, collect any trash floating in her. In the hour and half we sat there, he spent almost the entire time turned away from the aarti and the puja, instead, bringing in bottles and waste thrown into the river upstream. This, I think is true reverence for  the river, keeping her clean and pure, as she is meant to be.


On that note, we left the river behind, and moved to our next halt at Rishikesh – Pahadi House. Look out for the next post for more!