October 15, 2015
At Sirpur, a dark room, with every window tightly closed, doubles up as a museum for the rarest of artifacts discovered here during excavations. Entering the room is like opening a door into another world, one filled with unimaginable treasures. You don’t know where to look, what to see first, and what to look closer at – there is so much to see! My eyes, however were drawn to this one…. 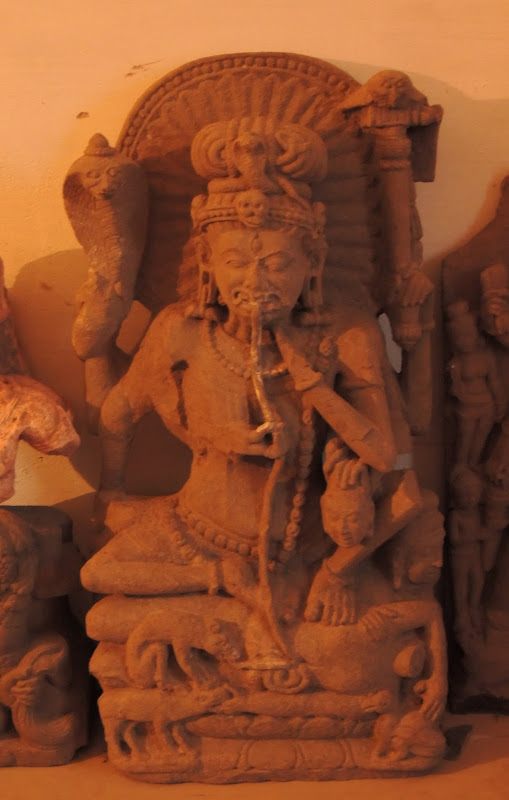 She is no pleasing, beautiful figure. Yet, she is striking. She is emaciated, almost skeletal in appearance. Her face is terrifying, with teeth so uneven, they look like fangs. She wears a garland of skulls, and carries two decapitated heads in her hands. She is seated on a corpse, and jackals are nearby, probably eating it. Entrails hang from her mouth, and it is evident she has been drinking the blood of her enemies, the ones she has succeeded in killing.On her stomach, holding the entrails with pincers, is a scorpion!  On her matted hair, she wears a snake, and another snake is coiled around, behind her. In her hand is a khatvanga – a skull mace.

She is Chamunda – the slayer of the demons Chanda and Munda, whose decapitated heads she holds in her hands. According to the Devi Mahatmyam, she is Kali, who is given the name Chamunda, to commemorate the killing of the terrifying demons.

I saw her at Sirpur in January this year, when I visited Chhattisgarh to attend the SirpurFestival. It is soon going to be a year since I saw her. Yet, her image has stayed with me.

Recently, in the Indian Aesthetics class that I am pursuing, there was a discussion on the depiction of the Nava Rasas. When it came to Bibhatsa, or disgust, I wondered which deity we would look at in such a manner. And suddenly, she came to mind. She did inspire disgust, and yet we worship her. Even in this disgust, there is beauty, in the concept itself, so detailed in imagery; in the symbolism, which extols the virtue of action against evil, and above all, in the artist, who created her, with such attention to detail.

Chamunda is believed to be one of the deities assimilated into Hinduism from tribal societies. She is one of the Sapta Matrikas, the seven mothers, who are worshipped across the country, in many forms. I have seen depictions of Chamunda elsewhere, yet this one, has made an impression, like few others have! Which is why she features today on the blog, for the third day of Navaratri.