October 20, 2015
This group of seven figures caught my eye as I wandered around the ruins of the rock cut temples at Masroor. “Sapta Matrika!” I exclaimed, surprised to see them here.

Then, after a closer look, I wondered – “Are they Sapta Matrikas, or simply seven figures? I can hardly make out if they are women. Besides, they are seated on lotuses.” They were certainly important figures, going by the detailed carvings above and below them, though the figures themselves are too ruined to identify.

We moved on, and stopped once more, at the sight of this panel… 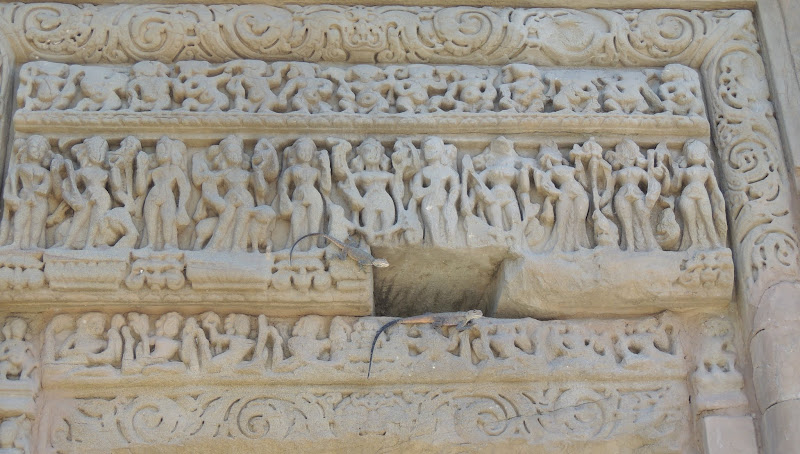 Another group of delicate, standing figures, certainly feminine this time. The first was almost certainly Indrani – going by her vehicle, the elephant; and the third must be Maheshwari, mounted on her bull. So, are they Sapta Matrikas too? Well, there were more than seven figures here, so they couldn’t be. Could they be Ashta Matrikas? No, there were more. Nava Durgas? By now, we were confused.

This group, once again seated on lotuses, was the last panel we saw. At first, we thought they were just three. Then, we noticed the almost completely ruined figures on the left and right. So, five goddesses… who could they be?

The central one was surely Gajalakshmi – see the elephants by her side? Could this have been part of an Ashta Lakshmi panel? The gods only know. The archaeologists certainly don’t seem to, there is so little information on these temples available!

There were other panels, with other groups of deities, but they were certainly male. I was more fascinated by these panels, depicting the goddesses.However, I shouldn’t have been so surprised. The Kangra Valley is associated with a number of temples dedicated to the Goddess, prominently among them, Jwalaji, Chitpurni, Bagalamukhi, Vajreshwari, and Chamunda. Many of these shrines are considered the most sacred to the goddess, and counted among the Shakti Peethas. No wonder so many of her forms are depicted at the Masroor Temple, which is also in the Kangra valley.