Tharangambadi - Land of the singing waves

October 26, 2015
Our train dropped us, early in the morning, at the rain washed station of Mayiladudurai. The rains were unexpected, and we had no umbrellas. We rushed for cover within the station premises, and leaving my son to take care of our luggage, I hurried to find a car to take us to our destination. The drivers outside were huddling inside their vehicles, reluctant to step out. Eventually, one of them agreed, and we made our way through the wet streets of the city to the small fishing village that was our destination – Tharangambadi, on the Tamilnadu coast.

I had first heard of Tharangambadi from my father-in-law, who was a history buff. His ancestors had once lived in the region, and he had told me of the old fort which stood here, overlooking the beach, and here I was, almost a decade after that conversation, heading to see the fort the Danes had built.

The little town of Tharangambadi was still asleep when we drove through the roads. Only a few fishermen were about, returning with their catch. The first indication that this was no ordinary fishing village came, when we passed through an ancient arch. Restoration was in progress, and it clearly pointed to a past era of grandeur and importance, so different from the sight it presented today.

The narrow road passed through old houses, churches and schools, and dropped us at the gates of another grand old structure – the erstwhile British Governor’s Bungalow, now a heritage hotel – the Bungalow on the Beach. While waiting for our room to be readied, we sat on easy chairs on the verandah, enjoying the sight of the waves crashing on the shore, their roar echoing over the silent beach, while the rain beat a rhythmic tattoo on the roofs. The sea and the rain seemed to be playing a jugalbandi, and the effect was so melodious, that I could understand why the early settlers had called this land – Tharangambadi – Land of the singing waves!

Tharangambadi had become Trankebar with the arrival of the Danes, in 1620. The Danish Admiral, Ove Gedde had entered into an agreement with Raghunatha Nayak, the ruler of Tanjore, and built a settlement here, the heart of which was Fort Dansborg. The central citadel, which is all that remains of the fort today, is typically European, a trapezoidal structure that faces the sea, and has borne the brunt of its moods over the centuries. There is no sign of the moat which once surrounded the fort, and only traces remain of the walls which once protected it.

We had been eager to explore the fort, but the caretaker was nowhere to be seen. He only arrived when the rains took a break, and we stepped into a courtyard carpeted with tiny yellow flowers, from which rose the brownish-orange sandstone walls of Dansborg. Climbing the ramparts gave us a wonderful view of the sea, and the village, and it was almost like time had stood still. 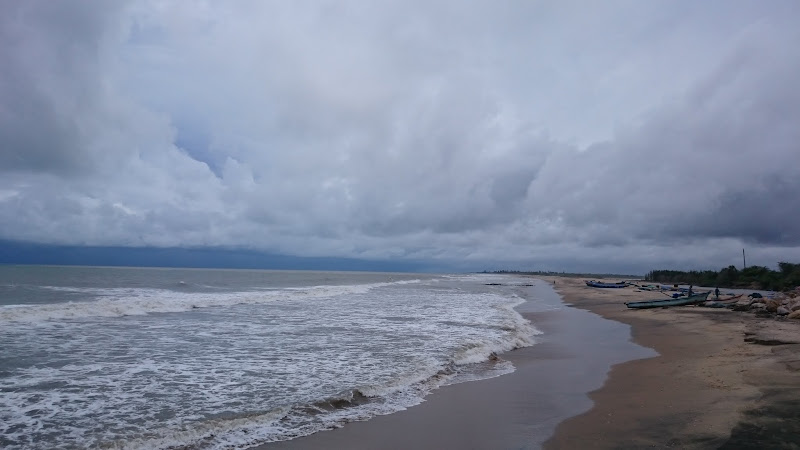 For my son, it was an adventure to walk on the partly submerged brick walls of the erstwhile fort. For me, it was a scary prospect. As he stood there, on the wall, his hair flying in the wind, his face raised to see a flock of flamingoes flying past, I stood on the shore, ruminating about the rise and fall of fortunes. 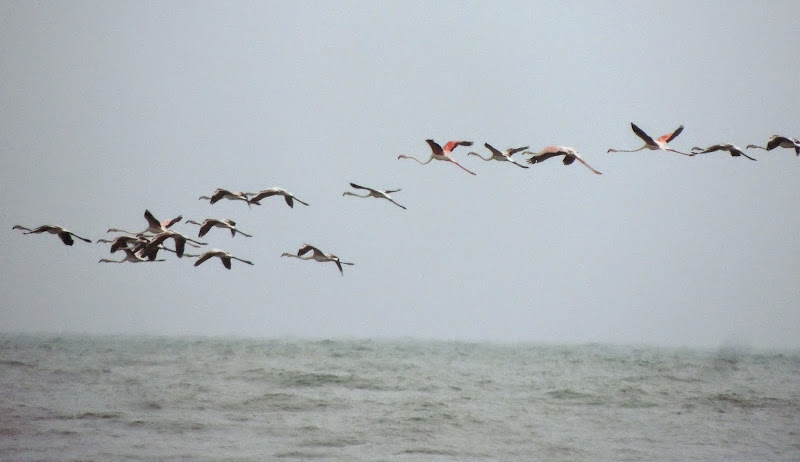 The Danes had enjoyed much prosperity here. They had traded in spices, and helped spread their faith. Their most lasting contribution was however, not their culture, but their religion – for they had brought Protestantism to India. On the shore, right outside the fort stands a stone plaque, commemorating the arrival, in 1706, of Bartholomaus Ziegenbalg, and Heinrich Plutschau, the first Lutheran Missionaries to arrive in India. 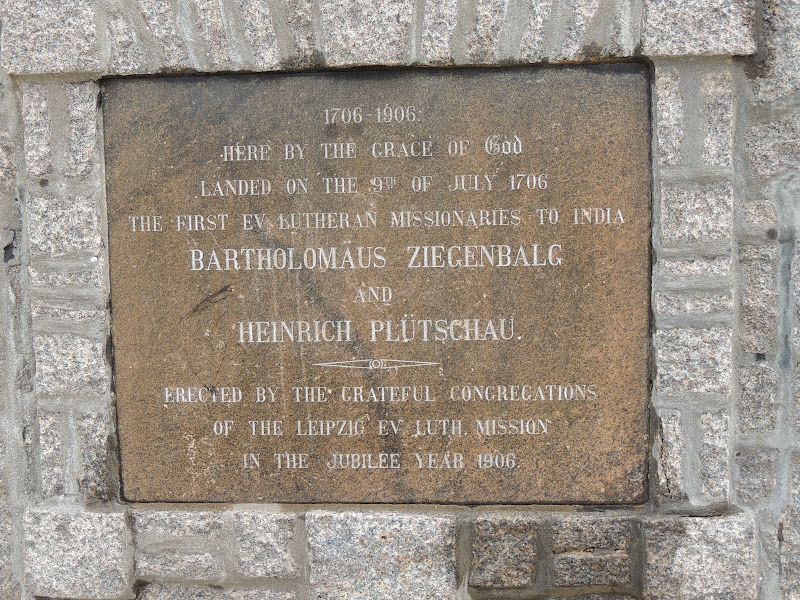 Both were German, zealous men of faith, who spent years studying Tamil, understanding it, and growing so fluent, that they translated the Bible into Tamil! Building a printing press, they churned out so many copies of their Tamil translation of the Bible, that the mass conversions which followed were inevitable! Looking back, it seems ironical to think that while the Danes have disappeared into the pages of history books, Ziegenbalg remains in the memory of those he helped convert. His grave in the New Jerusalem Church is the best maintained in the entire town! 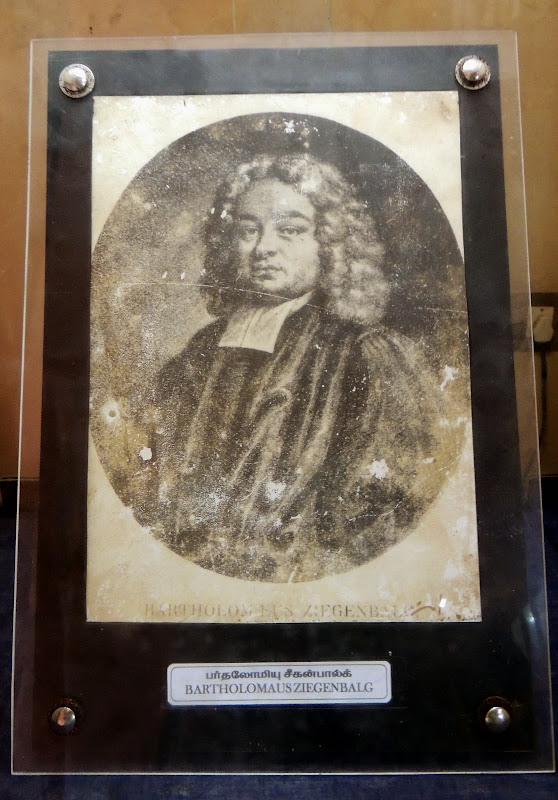 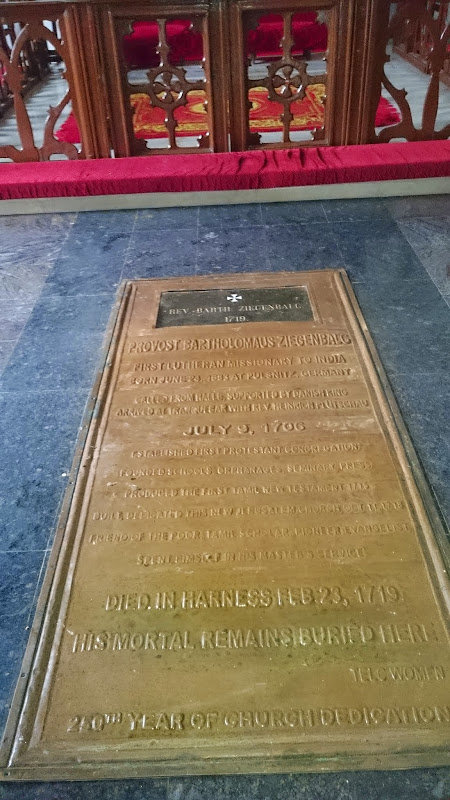 Ziegenbalg... and his grave

The time of the Danes, however, came to an end, and Trankebar became Tranquebar, when the British bought the fort in 1845. Our hotel, the erstwhile British Governor’s Bungalow, was an indication of just how important the British had considered this fort. However, they too left, a century later, and Tranquebar once again became Tharangambadi. Reflecting on the ever changing and cyclical nature of life, we headed next to explore another aspect of the town, one much older than the fort or the church.

A bit further along the shore, on the other side of our hotel, was the brightly coloured spire of the Masilamani Nathar temple. Dedicated to Lord Shiva as Masilamani Nathar – the unblemished one – the temple told us a story far older than the fort. Built during the reign of Kulashekhara Pandyan I in the 14th century, the temple stands on the shore, the waves lapping at the steps of the shrine.

As we sat on the steps, our feet dangling in the water, we listened to an old priest tell us stories of the temple. He didn’t know any legends about the temple itself, but he told us of the great importance the temple had, during the Pandya rule, when this had been a busy port, bustling with trade, drawing traders from across the world. Romans had come here, as had the Chinese. “There was a Chinese deity affixed atop the spire” he insisted, “to draw more Chinese here”. We must have looked skeptical for he added “You ask them at the museum. They will tell you it is true.” As to where the idol was now, he had no idea. “It must have been washed away in the Tsunami. Not the recent one, the one they say came centuries ago.”

This coast has been prone to nature’s furies, and a Tsunami, centuries ago, is said to have swept away the first temple built here. We know little of those times, but the Tsunami of 2004 is the one in recent memory to have wrecked this coast, and scarred monuments and humans alike.

Stories of the 2004 Tsunami are everywhere. The day the sea rose, and swallowed everything it could, is fresh in the minds of those who survived. One of the watchmen at the hotel, talking to me about his memories of that day, said “The sea is more dangerous than it appears. So many children attempt to swim, and die, dashed against the rocks each year. But the Tsunami was different. The sea rose, but we couldn’t believe that it would eat up our village. But it did. And that day, it wasn’t the roar of the waves that was terrifying. It was the silence!” His words were disturbing, but we heard similar refrains across the town.

The devastation caused was unimaginable, but the tsunami also indirectly brought about some good. The flood of relief operations brought attention back to its glorious history, and its ancient monuments. A Danish organization stepped in, and in collaboration with INTACH and the ASI, began restoring them. The fort was the first to be restored, followed by some of the old buildings and churches. The Danish Governor’s Bungalow is being readied to house a museum, and a maritime museum is already open, albeit in a small hut! Palatial mansions and small houses are being restored to be used as homestays, and a promenade is being built along the shore. Most importantly, the town is already beginning to attract tourists.

On that wet weekend in October, we were among the few tourists in Tharangambadi. A young couple from Bangalore gave us company at mealtimes, and a few families dropped in to see the fort and play on the beach. “There are so few people here because of the rains” rued the guard at the fort. Then he smiled “I can go home early, before it starts pouring again!” We didn’t mind the rains though, and walked barefoot on the beach, reveling in the experience of having it to ourselves. 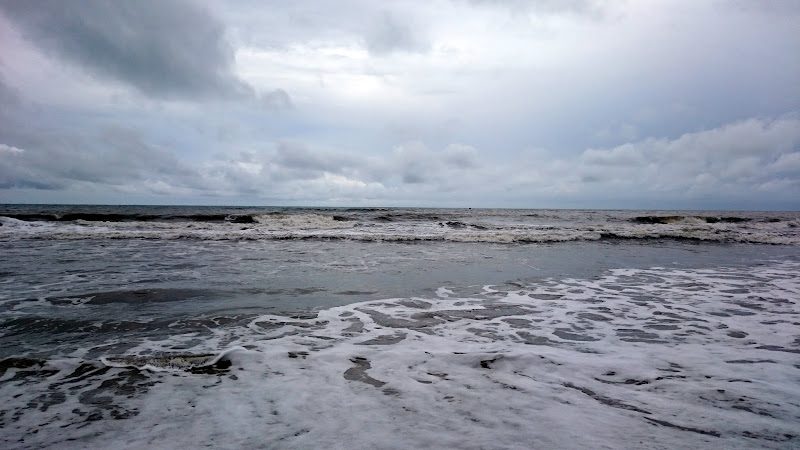 The next morning, our last in Tharangambadi, we woke up early, and, on the advice of our hotel watchman, walked down to an estuary, where the river Manjaar merged with the sea. The shore was strewn with shells, and we struggled to decide which to take back home with us. Among them were dead eels and anemones, a warning sign of changing times.

A fish, washed ashore by a wave, and struggling in the sand, caught my son’s eye. Picking up one of the huge shells scattered around, he lifted up the fish and threw it back into the river. Never have I felt prouder!

As the sun rose, the crab fishermen arrived, and began digging holes in the sand, deftly catching the crabs which hid underneath. Then came the fishermen, returning with their catch. Soon, the birds arrived – crows and kites, struggling to stay afloat in the strong wind, even as they tried to grab fish as they fell from the nets.

It was a simple moment, one that is replicated in every fishing village. Yet, it made me wonder – was it like this once, before this town was a trading port? Before great powers set their sights on this land? The land and its people have been through so much – of nature’s bounty as well as her fury; of great times, as well as those of turmoil. Has life come a full circle? Then, so long back, there were traders and colonists. Now, there are tourists! Whether we come to see the church’s spire towering high, or the temple, with its steps still leading into the water, there is one thing for sure – that humanity endures, and that there is always hope!


This article originally appeared in the October 2015 Issue of Complete Wellbeing Magazine. 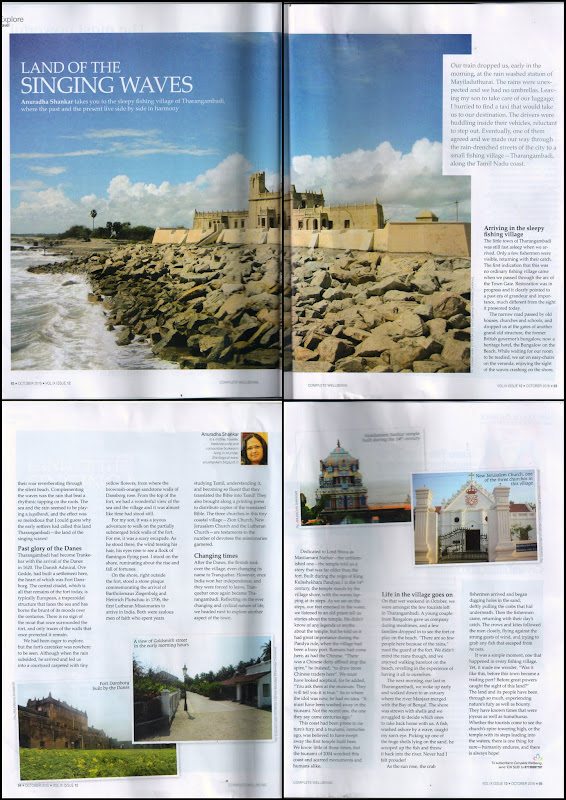 I visited Tharangambadi in October 2014, on invite from the Neemrana Group of Hotels.