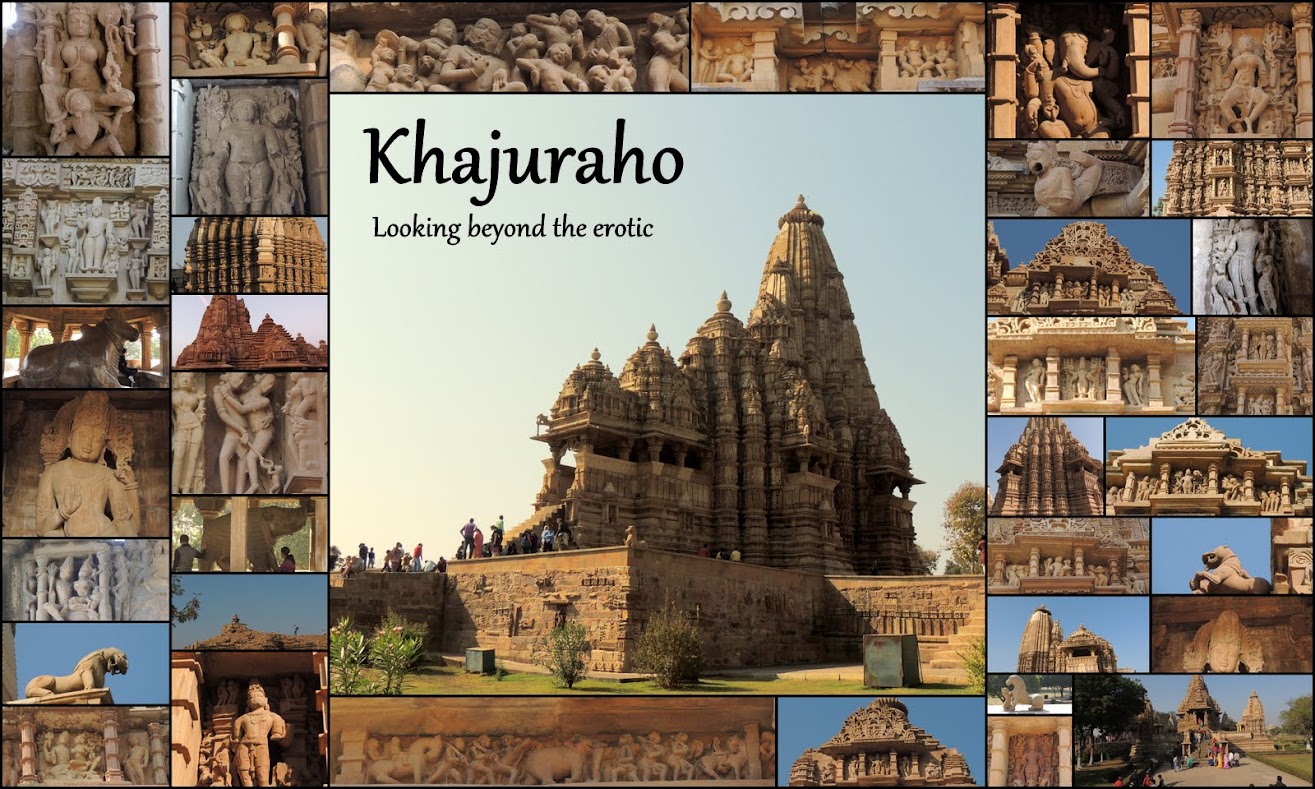 The desire to visit Khajuraho had been festering in me for a long time. However, the tipping point was a talk by Dr. Devangana Desai, on the temples of Khajuraho, as part of the Indian Aesthetics course I was pursuing. The trip was planned, the bags were packed, and off we went, to discover Khajuraho for ourselves. Our expectations were high, and I had read and heard enough, to know of the size, the grandeur, the detail….. But little did I know how moving it would be, and how inspiring!
We arrived at Khajuraho on a cold winter morning; the mist rising from the fields as the sun rose, bathing the ancient site with a surreal glow. Legend has it that the temples have their roots in a love affair between the Moon God, and a young Brahmin girl. Their child was the first king of Khajuraho, the progenitor of the Chandela dynasty. It is believed that he built 85 temples here, to atone for the sin his parents had committed. The erotic sculptures which Khajuraho is known for, are said to be part of his atonement too, and stand as a warning to others. The story is more myth than legend, but the temples themselves, standing scattered over the fields, seem to reach to the skies, as if seeking the heavens in quest of divinity.

Myth apart, these temples were indeed built by the Chandelas, but over a period of 250 years, from around 900 to 1150 A.D. The town was then called Kharjuravahaka, and extended over an area of 13 square kilometres.  Of the 85 temples which once stood here, only 25 remain, in various states of preservation. Khajuraho, during that period, seems to have been a place of worship for all the sects and religions prevalent during the time. Among the 25 temples still standing, 10 are dedicated to Vishnu, 8 to Shiva, one to Surya and one to the 64 Yoginis. Besides these, there are 5 Jain temples, built by the ministers and merchants, and a solitary sculpture of Buddha suggests the presence of Buddhism in the region as well.

The temples at Khajuraho were built by patrons (the kings, their ministers, and the merchants) for worship, and for acquiring merit and fame. Despite the different sects and religious affiliations, the most significant thing about the temples is that they are all built in the same architectural style, and use the same sculptural schemes. Thus, at first glance, there is a uniformity of style, which stands out, allowing us to believe that all the temples are similar. It is only when we look closer, and notice the subtle differences, that we realise how incredibly detailed and unique, each temple is.

The most impressive temples at Khajuraho are those in the Western Group, which is where we began our tour. These temples were built by the kings, and are, thus, among the most important as well.
As soon as we entered the complex, our attention was captured by the magnificent Varaha, the third incarnation of Vishnu. Vishnu, it is believed, took the form of a wild boar, to save the earth, and in this shrine, he is depicted as a massive boar, carved from yellow sandstone. On him are carved 675 miniature figures, depicting deities from the Hindu pantheon. The boar here, is thus a cosmic form of Vishnu himself!

If I had any doubts of bringing my son here, they disappeared the moment he looked at the Varaha, and was entranced by the magnificence, the intricacy, and the very idea of the boar as a cosmic form of the lord! Our guide had to literally pry us out of this shrine, and, during the course of our trip, we returned here, day after day, just for one more glance!

The Lakshman temple, which stands right opposite, is dedicated to Vishnu as well, again in his cosmic form, as Vaikunta Vishnu. The 4 feet high image enshrined in this temple depicts the lord with three faces – the lion, the man and the boar, an image which originally came from the Chamba region ( in Himachal Pradesh).

The temple is covered with sculptures, both inside and outside the sanctum. It was fascinating to wander around, trying to identify the different deities depicted – from the avatars (incarnations) of Vishnu such as Hayagriva, Varaha and Vamana, to some forms of Shiva, Brahma, and the goddesses. Besides these main deities, the temple also has the gods of the eight directions, the Ashta Dikpalakas, and the nine planets, all on the outer walls. In the words of Dr. Devangana Desai,

“The architect has presented the temple as Mount Meru, the centre of the universe, around which the planetary deities revolve.”

A little way further is the Kandariya Mahadev temple, the tallest structure at Khajuraho. This temple gets its name from the word ‘Kandara’, which means ‘cave’, and indeed, it is an apt description of the temple, which appears to be a massive mountain, with the shrine as a cavern. The idea of course, is that the temple itself is Kailasa, the abode of Lord Shiva. The niches around the sanctum house images of Shiva in his various forms, and every deity in the Shaivite pantheon has his/her place here, with gorgeous panels of the Saptamatrikas (the seven mothers) placed in niches on the outer walls in positions which suggest that they are circumambulating the shrine.

The Kandariya Mahadev is considered among the most important, and impressive monuments in India by scholars, and indeed, standing there, craning our eyes to look at the spire, trying to identify the various deities on the walls, we were overawed, by not just the size, but also the wealth of detail.
While our guide tried to fob us off, assuring us that all the temples were alike, we refused to give up, and continued our exploration.

The so called Chitragupta temple is actually dedicated to Surya, the Sun God, and a majestic image of Surya riding his chariot of seven horses stands in the sanctum. On one of the outer niches of this temple is the unique sculpture of a 11 headed Vishnu, seen nowhere else!

Just outside the enclosure of the Western Group, stands the only temple which is still under active worship – the Matangeshwara temple. Here, the central shrine has a massive lingam, where we have to climb on to the base, to even see it! It is said to be the largest lingam in India, and the temple is said to have been built around it!

Among the temples of the Eastern Group, the Jain temples were fascinating, as was the museum housing some of the Jain sculptures found here. At first glance, they appeared no different from the Shaivite or Vaishnavite temples, until we looked closer at some of the sculptures, and noticed the differences.

At the Vamana temple, dedicated to Vishnu’s incarnation as the dwarf, someone had left flowers at the feet of the deity, though the temple itself isn’t in active worship. It was a moving sight, to see the flowers, and the faith that accompanied it.

At the temple to the 64 Yoginis, the only one of its kind that isn’t circular, but rectangular, the caretaker doubled up as a priest, tying a sacred thread on my son’s hand, assuring him that the Goddesses blessed him. This is one of the oldest temples at Khajuraho, dating back to 900 AD, and though not a single Yogini stands in her niche today, the temple has an aura all of its own.

Among the Southern Group, at the Chaturbhuja temple, Vishnu stands with his feet crossed, in a stance reminiscent of Krishna. The 9 ft. high sculpture is a triumph of art, and, despite being broken, is still majestic!

The Bijamandala mound was our last halt, where we could see the remnants of the excavated temple, which is believed to be dedicated to Shiva as Vaidyanatha. It was fascinating to see the structure in this state of partial excavation.

Over the three days that we stayed at Khajuraho, we returned to the temples again and again, content to just walk around, noticing some new detail, admiring something we hadn’t seen before.

While we were most fascinated by the sculptures of deities and their iconography, the other sculptures were no less impressive. The sculptures of beautiful women, called Apsaras or Surasundaris, have been thought to be added for auspicious reasons, since they were associated with fertility, as well as to add an element of beauty. However, they also had symbolic references. For example, a palm tree appearing behind a pair of women appears to relate to the name of the town – Kharjura vahaka, which comes from the word Kharjura, or ‘date palm’. 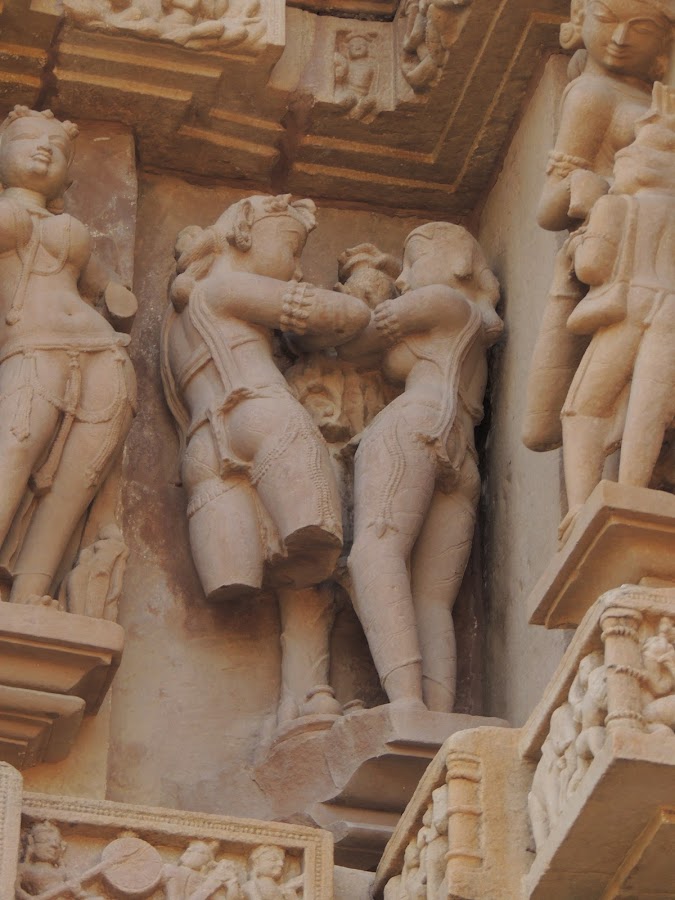 The emblem of the Chandelas – a man fighting with a lion is another common motif through the temples. It is believed that the first Chandela king (the one from the myth), when he was a child, fought a lion with his wooden sword, and emerged victorious! Sculptures depicting this scene are seen at almost all the temples, especially at the higher levels of the spire, and a majestic sculpture today stands in one of the smaller shrines. 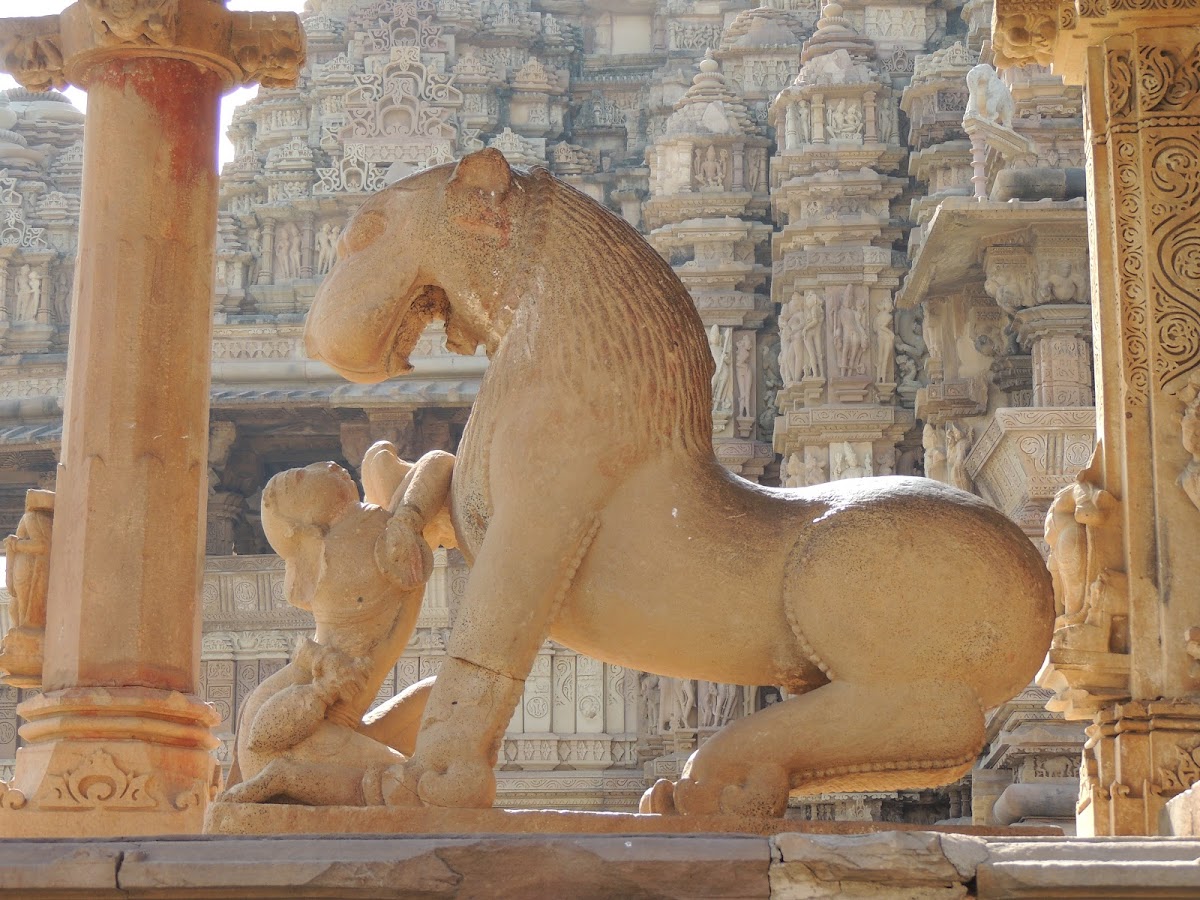 There are social scenes as well, showing us glimpses of everyday life. In one panel, a physician pulls out a thorn from a woman’s foot, while in another; a man staves off a monkey, as a woman embraces him in fear. Somewhere, brave soldiers set out for war, proudly carrying their swords, while an elephant turns its head aside to laugh at their foolishness, while elsewhere, a pair of mendicants sing and dance in joyful abandon. Acharyas or teachers are evidently held in great respect. They are often seen on the base, either presiding over a session, or talking to their disciples.

Besides, there are the fantastic, mythical beings, the Vyalas and the Makaras, which are seen both, on the temple walls as well as on arched door frames. Each one is an exquisite work of art.

After three full days in Khajuraho, I thought my son would be tired of temples, and their iconography. However, as we got into our auto to drive to the station, he insisted we make a short halt, to see the Varaha, one last time.

As I watched him stand in front of the gorgeous sculpture in utter silence, as if committing every detail to memory, I thought of those who had questioned my intent in bringing him here. I wished they could see him now, for the answer lay in his utter absorption.

This, after all, is what the temples at Khajuraho are all about – our eternal quest, for the divine.

An edited version of this article appeared in the October Issue of Firefly Magazine, the Inflight Magazine of Firefly Airlines, Malaysia, as part of their Special Deepavali Issue. You can read it here.