A Trip On Diwali -- From Shirdi to Bordi

December 03, 2007
This Diwali, my sister-in-law and her family from Chennai came to visit us. They wanted to visit Shirdi and some other holy places. There were 10 of us, five elders, over 60, who wanted to visit temples, four over 30, who wanted to go somewhere interesting and different, and my four year old son, who just wanted to get out of the house. So, we finally came to a compromise. We would start our trip visiting the temples t Shirdi and Nashik, but then we would go to the beach at Bordi.
Diwali is celebrated early in the morning by us, South-Indians, so after lunch we were ready to leave. We first went to Shani Shingnapur to pay our respects to the planet Saturn, hoping that He would be considerate towards us. Thank God the temple is open all day and night long, for we reached there around 11:00PM due to some miscalculation in the journey time.
Then we went to Shirdi, and after a short rest, went to the temple early in the morning for the Kakad Aarti at the temple, to bow before our Guru, the Sai Baba 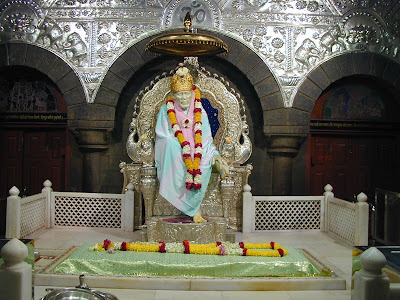 After Brunch, we proceeded towards Saptashrungi to pray to the Devi. For more on Saptashrungi, see my post at

http://anushankarn.blogspot.com/2007/11/saptashrungi-devi-temple-vani.html
We then proceeded to Nashik, where both Lord Rama, an incarnation of Lord Vishnu, and Lord Shiva, are prayed to, with equal devotion. After having a bath in the holy river Godavari, at the Ramkund, where the 12 yearly Kumbh Mela takes place, we went for a round of the important temples in Nashik, accompanied by a guide.

He took us to many temples, and told us of the legends (legends or stories, it depends on how one looks at it) surrounding the place. Many of the temples were almost ordinary, despite the importance he attributed to them. However, one temple caught my fancy. The Sita Gumpha is supposed to be a cave in which Lord Ram placed Sita for safety, when he went to battle the Rakshasas sent by Ravana after the disfigurement of Surpanakha. For good measure, he installed a Lingam (a symbol of Lord Shiva) at the cave entrance to protect his wife. The temple is within a cave, and one literally has to crawl in and out of it. It has a wonderful atmosphere, and one really wants to believe the legend!My husband meanwhile was getting bored of all the temples, as it was delaying his plan of leaving Nashik immediately after breakfast, so we hurried up with the other temples, and went for breakfast.
After the heavy breakfast, we proceeded to Tryambakeshwar, the famous temple of Lord Shiva, which is one of the 12 Jyotirlingas. It is a huge temple, but much like any other. The unique thing about this temple is that the shape of the Lingam is upside down, with the Godavari bubbling up in between, with 3 small lingams, representing the Trinity if Brahma, Vishnu and Shiva. Truly, the concept of Trinity is valid in this place, which is associated by the legends with all the three Gods. 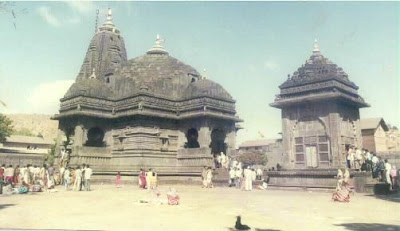 From Tryambakeshwar, one can climb up further to points where the river Godavari appears, right up to Brahmagiri, from where she originates. On this trip, we did not have time to explore all these interesting places. Anyway, Nashik has many more places of interest, and we intend to pay a more leisurely visit in the future.
Finally, from Tryambakeshwar, we were on our way to Bordi.
My son had been looking forward to the beach ever since we left home. He was carrying his Sand-pit toys as if they were made of gold- not letting anyone touch it. We all were looking forward to playing in the water, cooling off after a hectic weekend of traveling. As it turns out, my son was extremely happy, while we were stunned.... when we went out excitedly to the sea (with my husband right in the front, already wearing his swimming trunks, and carrying a towel), all we could see was SAND. Sand, sand and more sand!!! 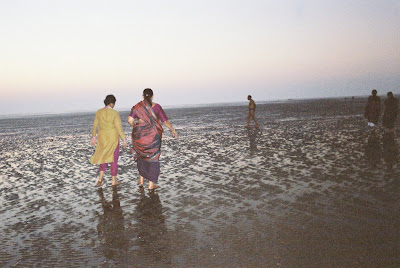 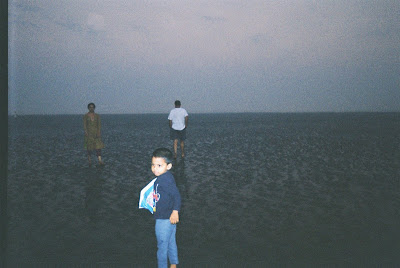 After the new moon, it was low tide it seems, and the water was miles away, and didn’t look like it was going to come any nearer. My son was perfectly satisfied (he doesn't enjoy the water much, anyway) and sat down to play with his toys and build sand castles. We weren't ready to give up, and walked and walked, but finally when it grew dark, and we still couldn’t see any water, we decided to come back. The locals told us that this happened often and wasn’t a surprise to them.
The next morning, we got up early in the morning and walked out to the beach again, which looked almost the same. So, leaving my son and my brother-in-law to amuse themselves in the sand, we all walked, looking for the water, which we found just as the sun rose, almost 1 hour later.After finishing my roll of film, we decided that there wasn’t much point in staying on, so we came back, had breakfast, and started back to Mumbai. 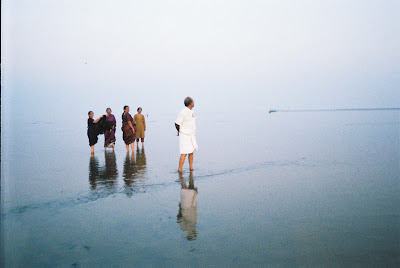 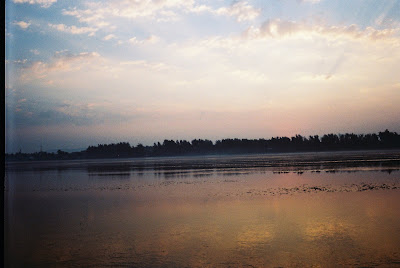 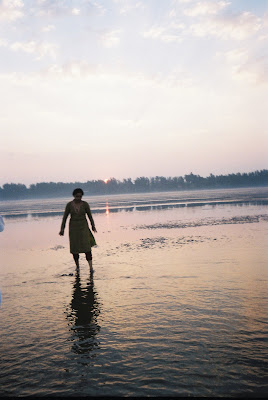 Over all, it was a wonderful trip. One I shall not forget too soon.
Beaches India Maharashtra Shirdi