Ayodhya - The Land of Rama

July 17, 2008
Ayodhya, the birthplace of Rama is bout 250 Kms from Varanasi. The river Sarayu flowing through this holy city is reason enough for a visit there. We expected the river to be dry, as it was the peak summer, but the quantity, the force and the depth of the water surprised us. Again, if time hadn’t been a factor, we wouldn’t have come out of the water at all. In fact, one of the best things that happened on this trip is that my son Samhith has lost his fear of water. 10 days of bathing in rivers has not only made him overcome his fear, but now he enjoys having a dip in rivers, and is proud of his ‘dubki’ or a full dip in the river, and actually tries to hold his breath under water! 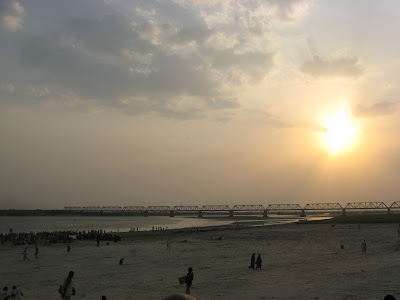 The Sun Rises over the Sarayu River 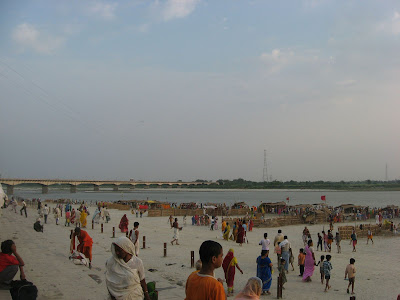 The Crowds throng the river into which Rama merged at the end of his rule on earth.

Ayodhya is much worse than Varanasi when it comes to extortion from pilgrims in the name of religion. In fact, even though we were accompanied by a guide, the number of people who tried to get money out of us in the name of Hinduism spoilt the entire trip for us. We made the trip to the Ram Janmabhoomi, which has been in the news for all the wrong reasons. When we had got through all the tight security, and walked the long distance to what was supposedly the exact place where Rama was born, I found myself thinking, not about God, but whether all that bloodshed was really worth it. I have never been a supporter of what some call ‘doing good in the name of Hindutva’, and a visit to this place which has seen the governance of a king like Rama as well as destruction in His name, made me sad , to say the least.

The Hanuman Gadhi, a temple of Hanuman is the only one which shows Hanuman on a throne. It is believed that Rama asked him to rule the city when there was no ruler.

While at Ayodhya, try to stay at the Birla Dharamshala. It is an amazingly clean and nice place, and if you can get one the few AC rooms, there’s nothing like it. 5 to 6 people can easily stay in one room and the experience will be like that at a 5 star hotel!

Places to Visit around Ayodhya