A Date with Flamingoes

March 16, 2009
Sunday – 15th of March – BNHS had organised a flamingo-watch at Sewri Jetty. The mud flats at Sewri attract throngs of these beautiful pink birds every year, and huge crowds of birdwatchers gather to see the spectacular sight. I had always hoped to be one of this crowd, but somehow or the other, this pleasure eluded me for so many years. This year, I decided that I just HAD to go, and looked around for company. No one I knew seemed to be interested, or free, and finally, it was down to just Samhith and me…… The two of us decided to go ahead anyway, in spite of the fact that we did not have any binoculars (The BNHS guys, when we called up, told us to bring a pair of binocs along, for better viewing)… 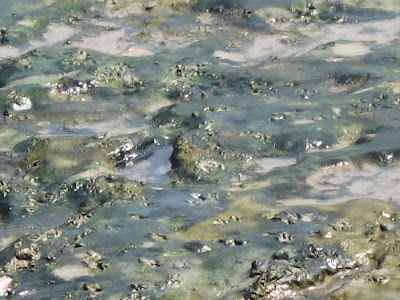 The Mud Flats - a closer view

Samhith was so excited, he woke up early without any prodding on my behalf, and we were ready at 9AM after a good breakfast. The first excitement of the day for Samhith was the local train ride to Sewri by the harbour line. He memorised the names of ten stations on the route, while he cast covetous eyes at the drawing books and key chains sold by the vendors on the train….

On alighting at Sewri, we spotted a group of people standing on one side, all wearing sports shoes and carrying cameras, binoculars and knapsacks. Guessing that these were fellow birdwatchers, we approached them and confirmed that they were, indeed from BNHS. Soon, a reasonable crowd gathered, and we all moved towards a tree by the roadside, where the registration took place. Conveniently for us (or perhaps by simply good business sense), there was a Nariyal Pani wala and a Sugarcane juice-wala right there, for us to quench our thirst while we waited to be led towards the jetty.

It was almost 10:30 by the time we started to walk towards the jetty, and by then, quite a crowd had assembled for the experience. A short 10 minute walk through the tenements brought us to the jetty, which was occupied by truckers and ship-workers who were too busy working to pay attention to the beautiful creatures we had come so far to see.

What a sight that was! It was low tide, and water was far far away… and so were the birds we had come to see… but they lined the opposite shore so thoroughly, it looked like a pink edging to the water, or in Samhith’s words – a pink sea!! At first, it was difficult to believe that all the birds were flamingos – they looked almost white, not pink! Then, they explained that these were the lesser flamingoes, and they were a light pink in colour, not the bright pink of the greater flamingoes! It was only in a large group that the pink colour was evident, and it took us some time to identify the birds by their shape without binoculars.

The BNHS chaps had come prepared for people like us, and they soon set up their telescopes at two convenient positions, and after a short wait, we were able to look through them, and were rewarded with a great view of lots and lots of flamingoes….. At first Samhith had a bit of trouble, and then thankfully, one of them lowered the tripod for him and the many other kids awaiting their turn, and he was simply thrilled at the sight of those wonderful birds.I suppose he hadn’t realised that the sea of pink was actually a mass of so many birds, but his “Mamma there are plenty of flamingoes !! thousands of them!!” had everyone in splits. Further, he was thrilled by his discovery that flamingoes had ‘curvy necks’!!

I woefully realised that my camera was nowhere near-capable of capturing these beautiful creatures, but I did not give up, and tried my best. By noon, the tide had just turned, and the water was coming in, bringing the birds closer to us. However, it was also getting hotter, and we had to head home for lunch. I managed to shoot more than 75 pics (thank God for digicams!) and here are some of the better ones. 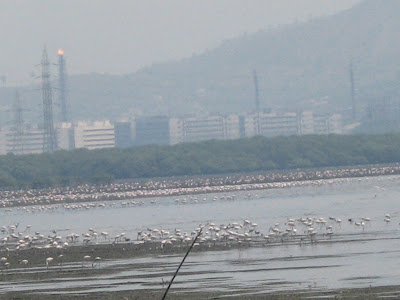 A Sea of Pink 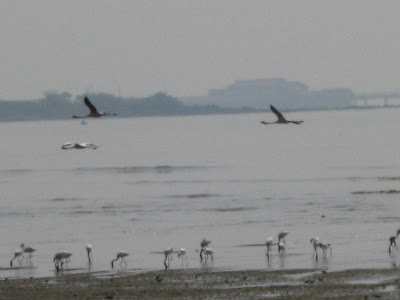 Flamingoes in Flight - one of the best photos I managed to get! 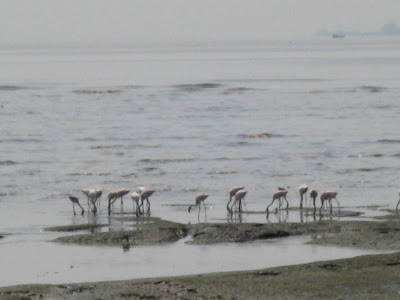 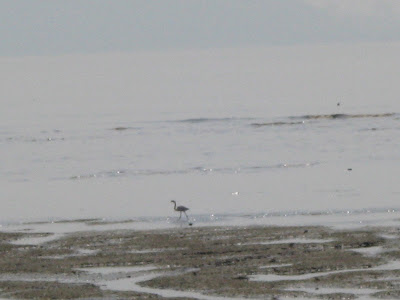 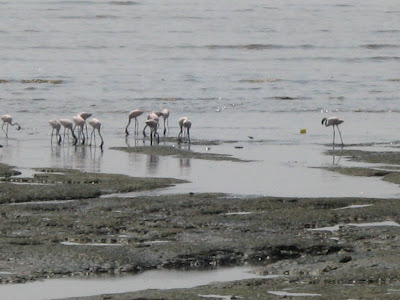 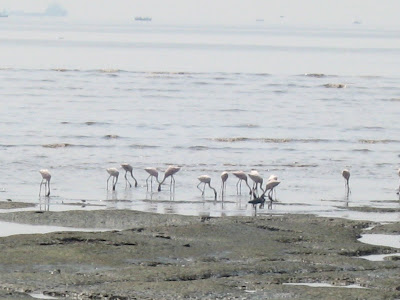 Apart from Flamingoes, we also saw a few other water birds such as large egrets, sandpipers and ibis. We also saw a salamander, wading in a pool of slimy water. Of all the things we saw, it was this tiny creature that fascinated Samhith the most! 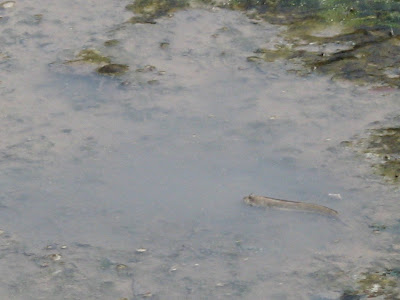 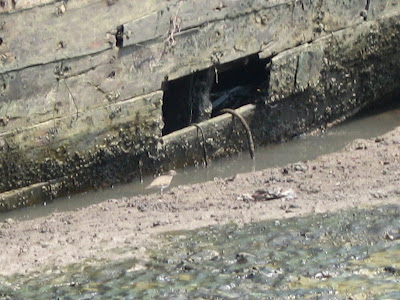 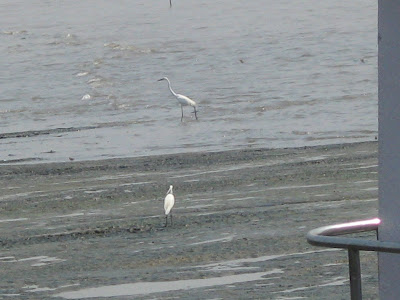 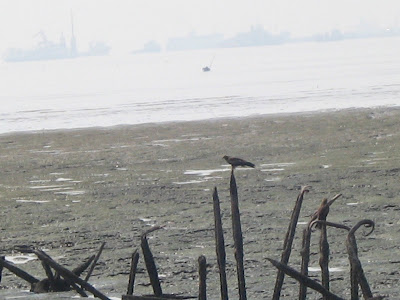 A kite and another bird (the brown one on the right ) 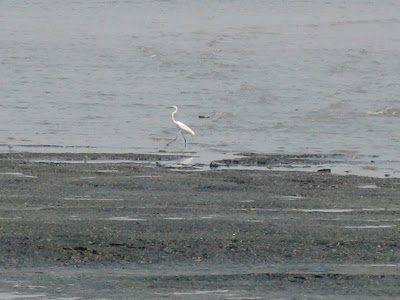 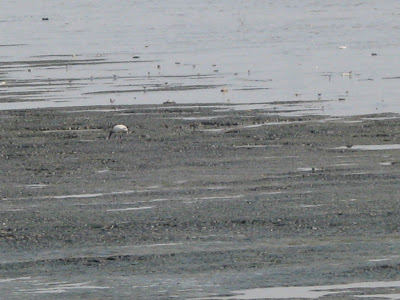 You can view the whole album here.

We finally started back for home at 12:45 and arrived at the station only to find that there were no trains towards Chembur due to repair-work on the line! So much for me buying a return ticket! We were both too tired to try out the buses (in any case, I had no idea about the bus stands in Sewri) and we headed home in a taxi.

Thus ended half of a Sunday spent fruitfully in watching flamingoes. Needless to say, the rest of the day (and this Monday morning too) was spent in telling people about our experience. Samhith is now clamouring for more bird watching trips!!!