A Smile To Remember


An old man sat by the side of the path, as I entered the office. He smiled at me, and I smiled back. He was forgotten at once, immersed as I was in the work I had come for. A few minutes later, I was interrupted by my excited son, Samhith, who wanted my camera. Eager to be rid of him so I could talk, I gave him my camera, not even bothered about what he wanted to click. When I came out at last, my work done, I found him busy clicking while the old man smiled at him! “Amma, look!” cried Samhith. “I took a photo of this thatha (grandfather) MYSELF!!”. His pride at his achievement was infectious, and I looked at the photo, ready with my words of praise. Here is the photo he clicked that day..... 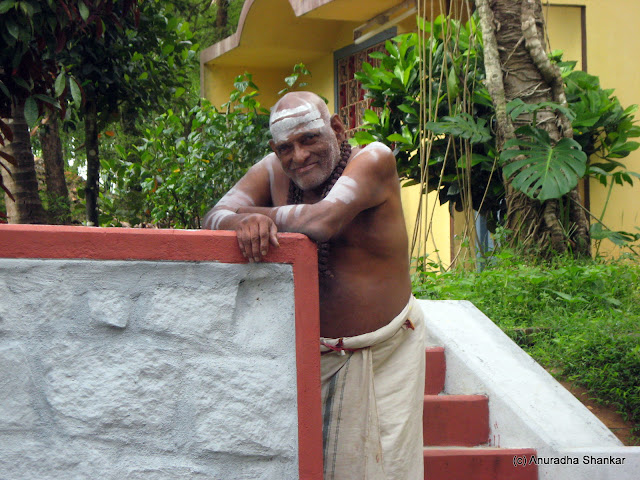 We were at Sringeri, in Karnataka, a place we love going to. However, this time, we were there with a purpose – to plan Samhith’s thread ceremony. We were swamped with the arrangements that had to be made, both at home in Mumbai, as well as at Sringeri, and the next few days were even more hectic ones. Every day, however, we went to the ashram, and there he was, the old grandfather.... ready with a smile for the small boy who looked out for him to play with while his mother was busy with more serious matters. Thus it continued for the next week, while we completed the arrangements. The day we left, I spoke to him, told him what we had come for, and that we would be coming again. His smile grew even broader as I explained about the thread ceremony. “This little boy” he said, “is blessed that you are performing his thread ceremony here, in this sacred place. May God be with you.”

We were back again at Sringeri two months later, for the ceremony this time, and the very first day that we were there, Samhith went in search of the ‘smiling thatha’, but he was nowhere to be seen! He even asked a couple of people at the ashram, but they said he was around somewhere, but couldn’t direct us to him. Days passed...the ceremony had been performed successfully, we had met the pontiff and gained his blessings, but Samhith was still not satisfied. “That thatha is so old. Will he be here the next time I come?” was the question he asked me every time we passed by the office.

It was, at last, our final day at Sringeri. We had been asked to come early to the ashram, so that we could take our leave. The place was deserted..... There were just a few families at that early hour, and as we walked along the path, we were greeted by birds calling out to each other. Immersed as we were, in our thoughts, I heard Samhith make a sudden noise – “Amma, look, there!! That old man! It’s that thatha!!” and sure enough, there he was! He looked far older than the last time, and even more bent and withered, but there was no mistaking that smile! And as Samhith ran towards him, it grew even broader!

To this day, I don’t know what the two of them talked about – for once, Samhith’s voice was low, (unlike his usual tone, which is loud enough to wake the dead) and as to the old man, I don’t think he spoke much at all.... his smile seemed to speak volumes more than words ever could! But the two stayed together, heads bent towards each other, conspiratorially, making me wish I had my camera along! And so they stayed till it was time for us to leave. As we said our goodbyes, the old man handed over an apple – a fruit he had just received as blessing from the pontiff himself. And he smiled that wonderful smile – one that was answered by a huge grin on Samhith’s face.

As we left Sringeri and made our way back home, we talked mostly of the ceremony, the pluses and the minuses, the people who had come, and those who hadn’t. Getting back to our routine lives, and uploading the photos we had taken, re-living the moments, I couldn’t but help remember the one moment that was etched so deep in my thoughts, though not in film – that of two smiling faces, one old and wrinkled, one young and smooth – bent towards each other, the identical smiles binding two people together... two people linked together not by blood, or even association, but by a chance meeting.....

In the words of H.W. Longfellow,

“Ships that pass in the night, and speak each other in passing,
only a signal shown, and a distant voice in the darkness;
So on the ocean of life, we pass and speak one another,
Only a look and a voice, then darkness again and a silence.”

P.S. I have recently written a guest post on Sringeri for Arti's My Yatra Diary. Read the post for more details about Sringeri.