Our driver dropped us off at the parking lot. “Go that way. The temple is right there”, he said. The parking lot was full, but the place was eerily empty and silent. A couple of drivers were taking a nap and a chap was selling lemonade. It looked nothing like any temple. There were no flower sellers, no one pestering us to buy puja items...... we wondered if we were in the right place after all. In my broken Kannada, I asked the lemonade man for the temple. He silently pointed ahead, and went back to his reverie. We walked on and soon came to an entrance, where a board assured me, that I was indeed at the place I wanted to be.... 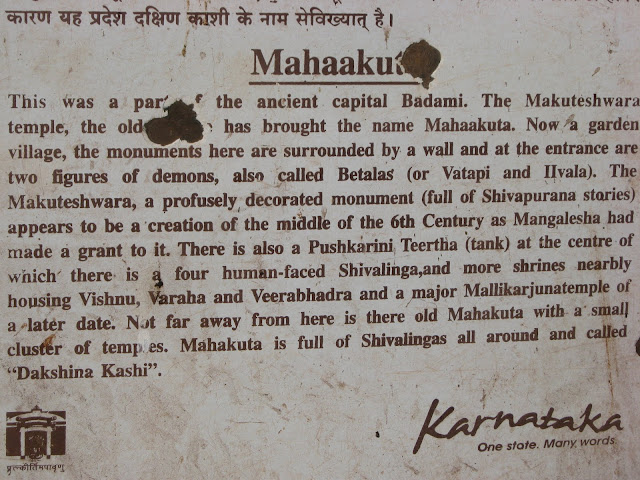 The temples of Mahakuta date back to the 6th and 7th centuries – when the Chalukyan kings ruled Badami. The temples belong to the same time period as those at Aihole and Pattadakal, and just like them, this is not just one single temple, but a temple complex. However, unlike Aihole and Pattadakal, these temples are still being used for worship, and thus have not completely fallen into ruins. 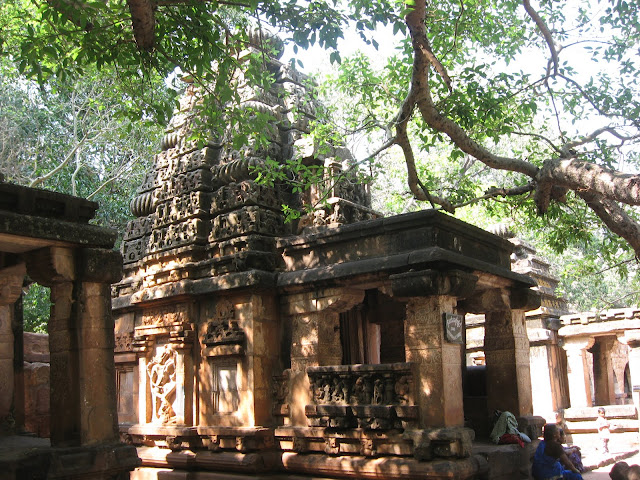 Having located the temple at last, I wondered at the silence... Was the temple closed? But no, I remembered our hotel manager telling us that it was open all day long. How then could it be so silent? A sudden peal of laughter startled us, and I realised that we were, after all, not all alone. But where was the sound coming from? Opposite us was a flight of steps leading into what appeared to be a garden, and on our right were two small doorways. The doorways looked too small to be the entrance of a temple complex, so we walked up the flight of stairs, crossing a narrow stream of water. A small locked gate at the end told us that we were on the wrong track, so we came back downstairs, and I finally decided to enter one of the doorways, as there was nothing else to be done.

I walked into what seemed like a different world altogether! The place was packed with people, and the decibel level was so high, I was surprised the outside was so quiet!!! I guess our ancient temple builders were experts at soundproofing too! 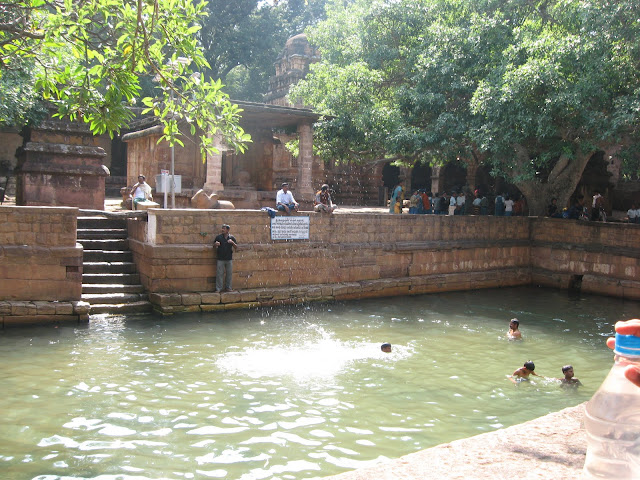 It took me a few moments to realise that the sound was not coming from the many temples within what seemed like a walled complex, but from a pond at the centre of the complex. A swimming / diving competition seemed to be in progress, and we had entered just at the time of the grand finale. A few more rousing cheers and the contest seemed to have ended. Men started pulling themselves out of the pond, and heading towards the gate, no doubt for some more celebrations and refreshments. At last, we had the place to ourselves – and I mean that literally, for there wasn’t a soul apart from us!

We had hoped to hire a guide, so that we could learn more about the place.... but that was not to be, since there wasn’t a guide in sight! All we could do was roam around and see what we could glean by ourselves!

As I mentioned earlier, the temple complex appeared to be walled in, and it seemed to be crammed full of temples around the small pond, which I learnt later, was the origin of a mountain stream. The pond is said to be always filled with water, the level neither increasing nor decreasing, since the excess flows out as a stream, and a canal utilises the water for irrigation. 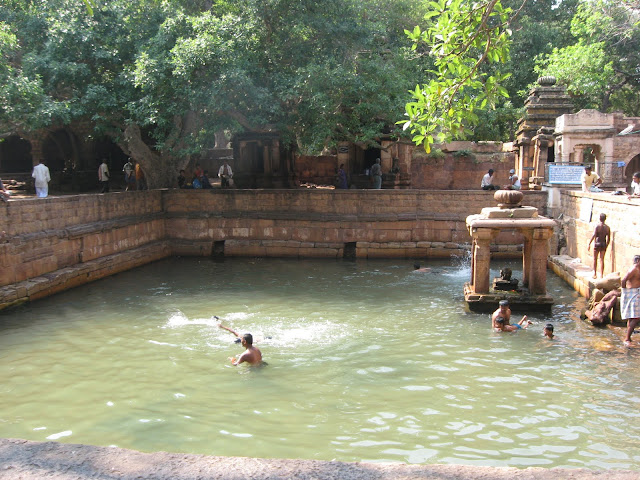 The main temple here is of Mahakuteshwara ... a form of Shiva. You can read more about the architecture of the temples at Wikipedia, so let me just take you around through my lens...

For a comparatively small and walled in temple complex, it is surprisingly green (and also surprisingly quite clean!). Huge banyan trees tower over the ancient temples, and provide some much needed respite from the sun! 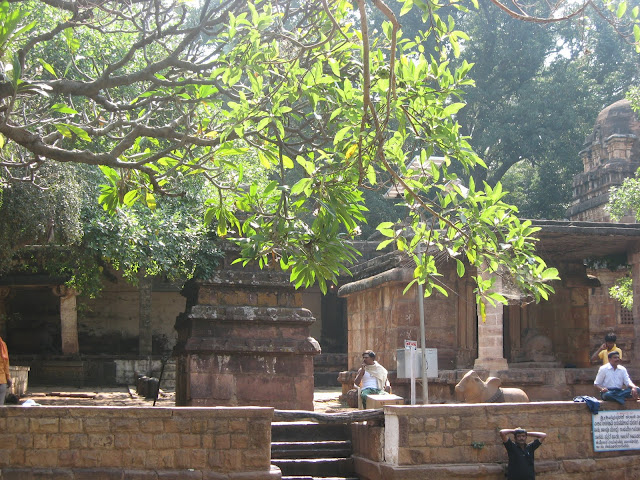 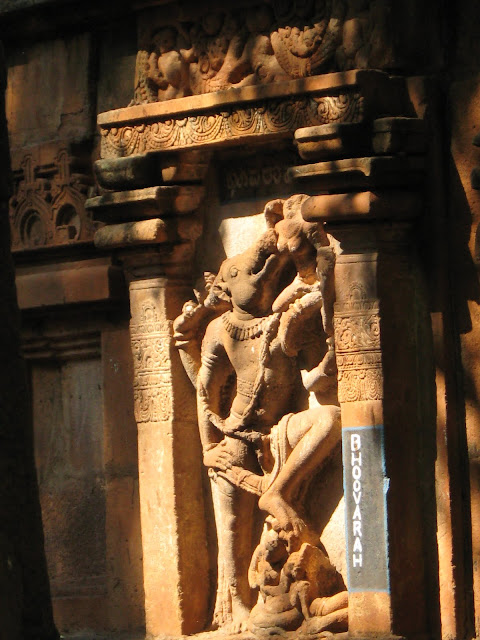 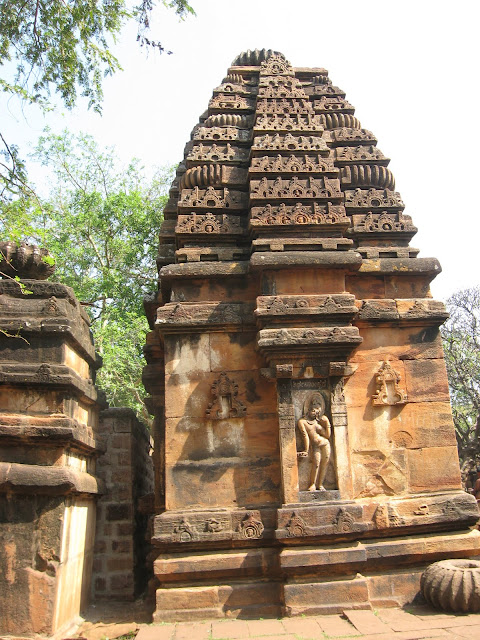 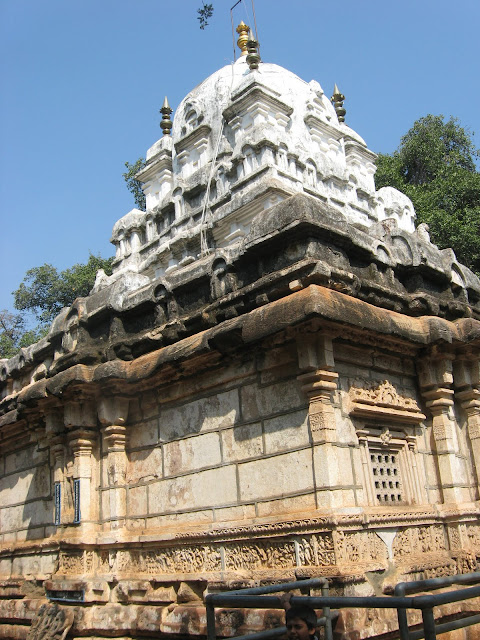 There are relics all over the place... lying by the side of the pond, propped up near shrines... Most of the names are written in Kannada, so we had no idea what they were...

The pond, or the ‘pushkarni’ as it is called, was, to me, the most interesting part of the temple. In the centre was a small shrine housing a Shiva Lingam with 4 human faces. 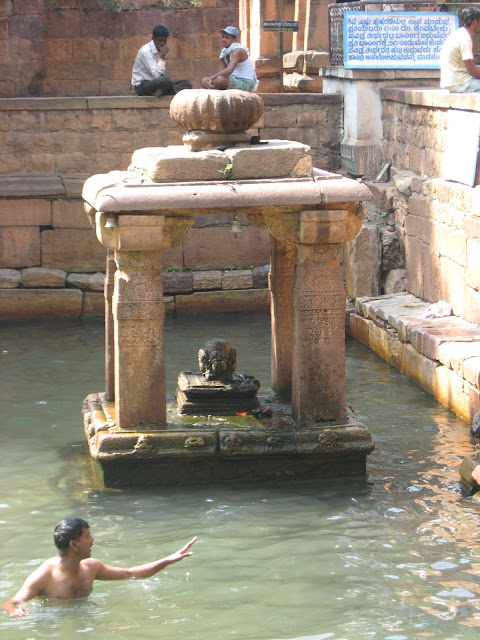 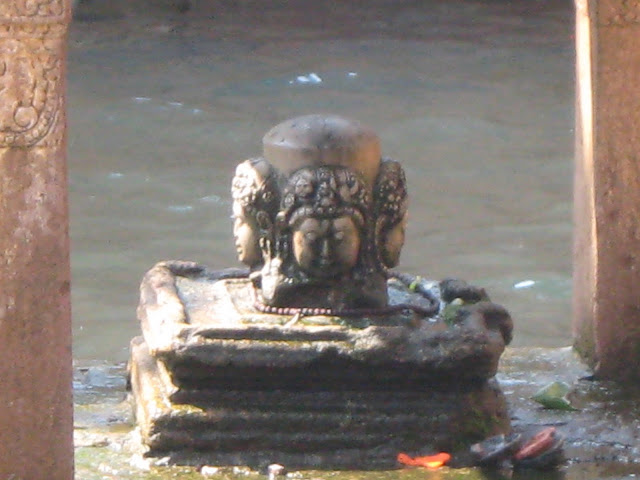 The few people who remained seemed to give that one a whole lot of importance, making the effort to swim to the shrine to pay their respects. As I went on clicking, another group arrived, and I overheard their guide telling them that under the pond was another shrine.... to a submerged Shiva lingam! I couldn’t resist going over and asking the man more about it, and he pointed out a sign I had missed.... 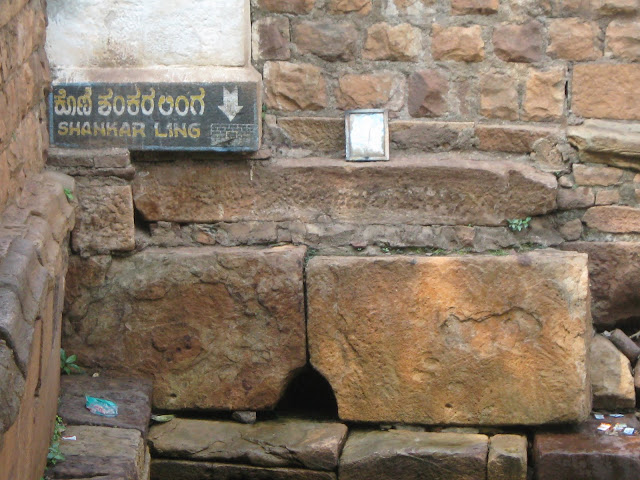 He told me that the crevice led to a small sanctum under the main shrine, which could only be approached by swimming underwater, but that few people could hold their breath for so long, which was why people held contests to see who could hold their breath for long periods underwater. The pond, he said was extremely deep, and no one really knew its depth. Well, even taking his explanations with a pinch of salt, it served to explain what had been happening before I entered the complex!

I guess I was lucky to see this temple in this light. From what I heard (and read) later, the temple usually sees a lot more crowd, and during festival time, it is completely packed. Of course, with all that crowd comes the bane of our times – the mess we create in the name of prayer.  However, this is how I shall always remember this temple - as a calm and peaceful haven with fresh water flowing out of the bowels of the earth, of the sounds of laughter and encouragement, of people happily splashing in the water. Being in the vicinity of the divine is supposed to make us happy, isn’t it? And that is what I felt here – happiness!

Mahakuta  Quick Facts
Getting there:
Nearest Airport: Hubli (about  120 Km )
Nearest Railway Station: Badami (14 Km)
Mahakuta is well connected by road to Badami (14 Km)
Where to stay: The only accommodation at Mahakuta are those provided by the temple, but we weren't able to sample them. The best option is to stay at Badami, where the KSRTC Mayura Chalukya is the best. There are also other hotels and lodges in Badami.

We visited Mahakuta in Jan 2011, doing a day trip from Badami, which included a visit to Mahakuta, Banashankari, Aihole and Pattadakal.