St. Francis Xavier and the Churches of Old Goa

December 15, 2014
The Decennial Exposition of St. Francis Xavier is being held in Goa till the 4th of Jan, 2015. This article on the Saint, and the churches of Goa appeared in the November 2014 issue of Being Woman Magazine.

He was born in Spain, and during his lifetime, travelled across Europe and Asia, spreading his faith. Death would normally put an end to such a life of travel, but after his passing, his remains travelled once again, re-tracing the route he had taken in life. More than five centuries later, he still arouses faith, drawing from far and wide, the devout and curious, across religions. Such is the inspiring story of St. Francis Xavier, the first Jesuit Missionary.

St. Francis Xavier arrived in Goa in 1542, when he was 36 years old. He travelled extensively across Goa and Southern India, spreading the word of God. His mission took him further across the seas, to Indonesia and Japan, but he passed away on the 3rd of December 1552, before he could enter mainland China. He was first buried at Shangchuan Island, Guangdong, China, and his remains were later moved to Portuguese Malacca. A year later, they were shipped to Goa, where he rests in a silver casket at the Basilica of Bom Jesus.

The Basilica of Bom Jesus is easily one of the most beautiful churches in Goa. It is certainly among the most visited, and the relics of St. Francis Xavier assuredly are the biggest attraction! Most people, on entering the church, make a beeline for the mausoleum and the silver casket which hold the relics. However, there is a lot more to see and appreciate here. 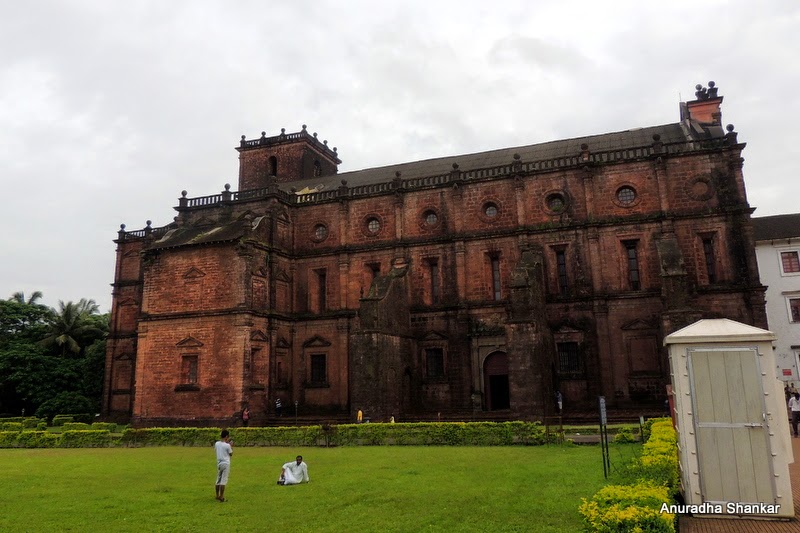 The rust red exterior of the Basilica sets it apart from all the other churches of Old Goa. Construction on the structure began in 1594, but it was only in 1605 that the church was consecrated. The imposing façade has the letters IHS carved on it, depicting the name of Jesus in the Greek script. The church itself is dedicated to the Infant Jesus, for whom it is named. It was raised to the status of a minor Basilica in 1946. 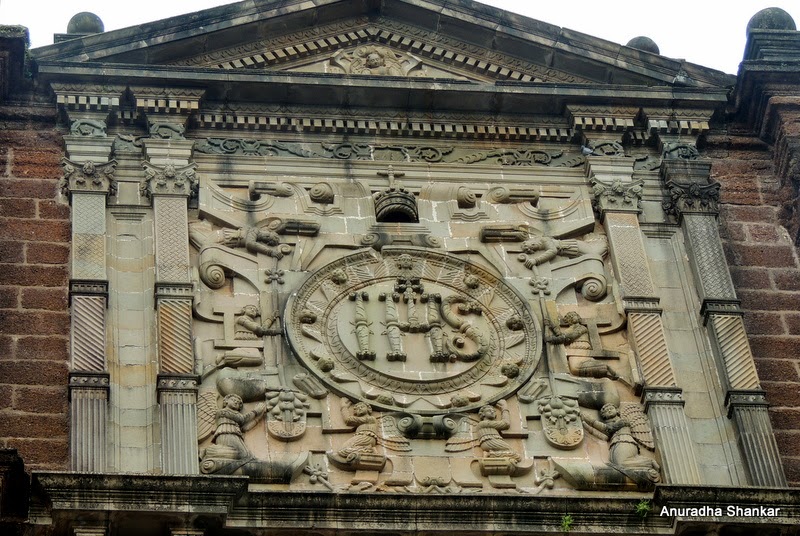 One of the first things that grabs our attention when we enter the church is an elaborately carved statue of St. Francis Xavier. On his arms hang marigold garlands, a testament to how religions have adapted and managed to sustain themselves over the centuries!

Inside, the main altar has a statuette of the Infant Jesus, and above it, a figure of Ignatius Loyola, the founder of the order of the Jesuits. He gazes at a medallion inscribed with the letters IHS, over which are depicted the Holy Trinity – the Father, The Son, and The Holy Ghost.


On either side are decorated altars, one dedicated to Our Lady of Hope, and the other to St. Michael. There is also an altar to St. Anthony, located beneath the choir. 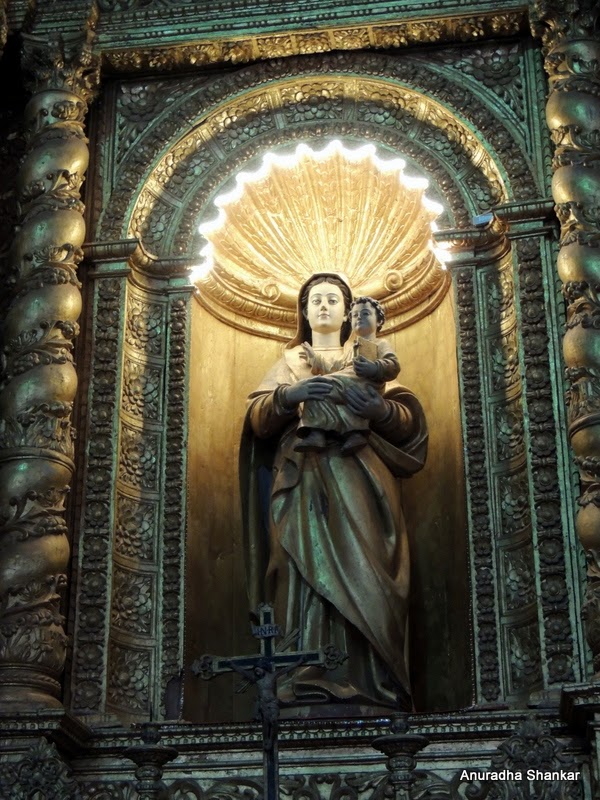 An elaborately carved and canopied pulpit is another attention grabbing feature. Among the carvings are Jesus, the Four Evangelists, and the Four Doctors of the church, but most interesting are seven figures carved below, as if supporting the structure. I wonder who they are inspired by!

There are two chapels – on the left, the chapel of the Blessed Sacrament, and on the right, with gilded columns and floral decorations in wood, is where the sacred relics of St. Francis Xavier are placed. This is the most elaborately and richly decorated section of the church, with the glass case in the silver casket holding the relics, the biggest attraction! 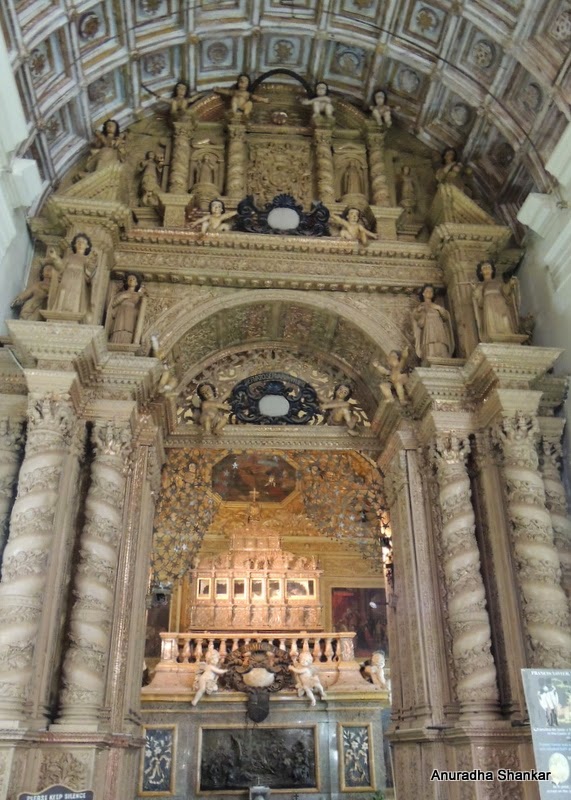 The Saint’s relics are venerated across religions, and people come from far and wide for just one glimpse. The faith and devotion arises, in part, due to the miracle that in spite of the passage of centuries, and the repeated movement of the relics across the continent, they have not succumbed to the ravages of time. Besides, the relics are said to have miraculous powers of healing, and thousands of people turn up for a chance to touch the relics when they are displayed to the public at an exposition held once every ten years. 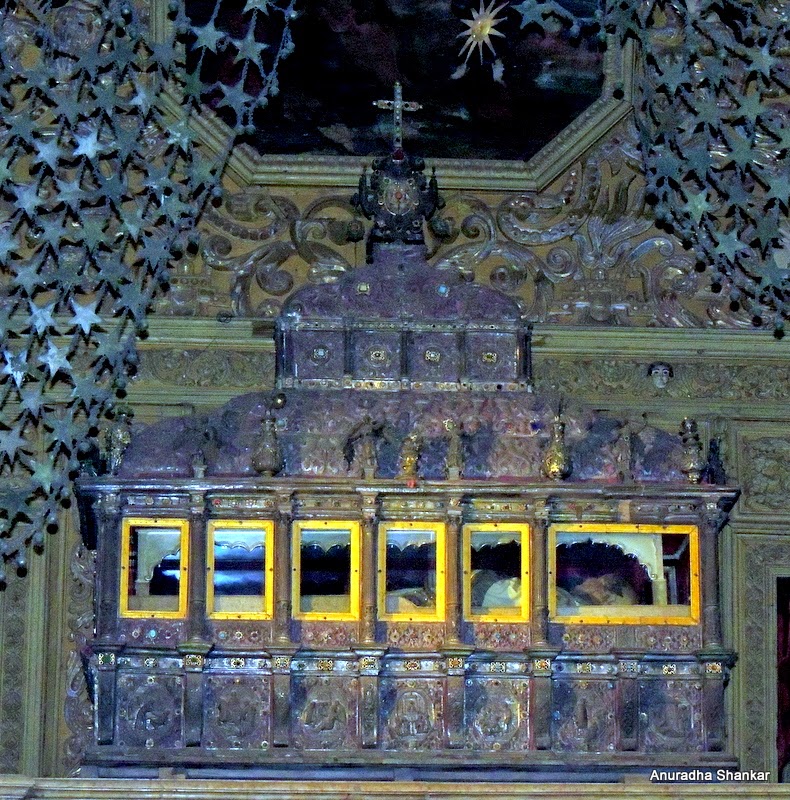 The exposition has so far been held 16 consecutive times, and this year, will be held again, between November 2014 and January 2015, to coincide with the feast day of the Saint, on 3rd December. The relics will be moved in a procession to the Sé Cathedral, where they will be venerated during this period. 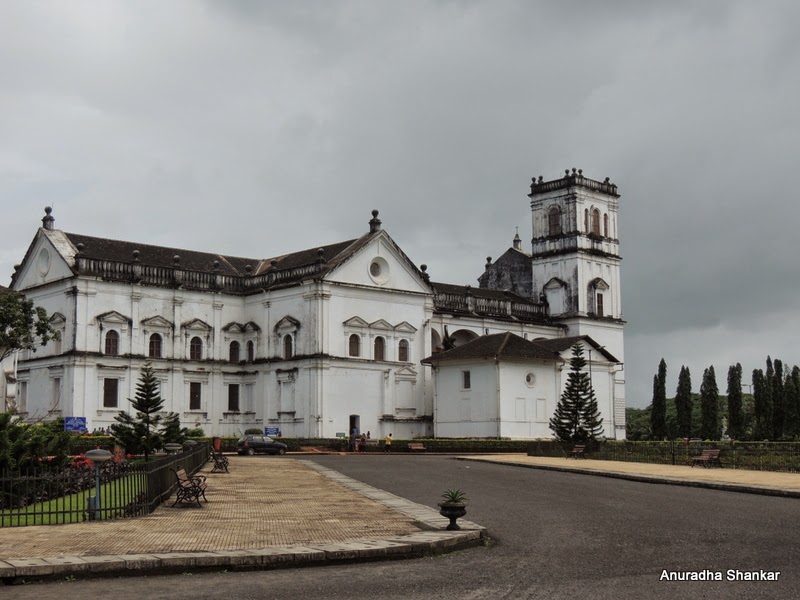 The Sé Cathedral stands across the road from the Basilica of Bom Jesus, its white exterior a sharp contrast to the rust red of the Basilica. It was built to commemorate the victory of the Portuguese Army led by Alfonso de Albuquerque over the Muslims, which led to the capture of Goa. This victory is said to have been achieved on the feast day of Saint Catherine, and the church is dedicated to her. 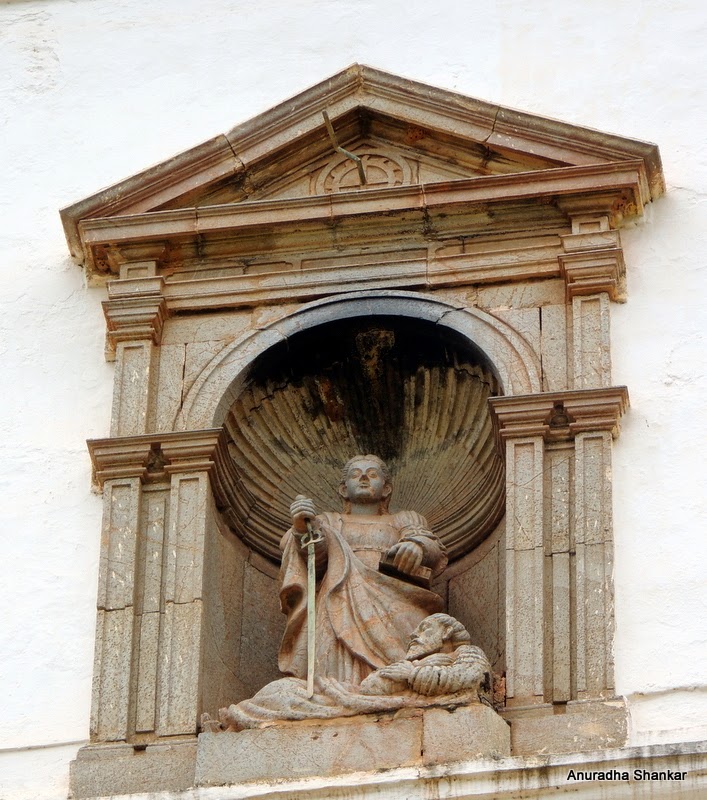 The present church stands on the remains of an older one, and was commissioned in 1562. Though work was completed in 1610, it took another thirty years for the church to be consecrated. There were originally two towers, but the southern one collapsed in 1776, and was never rebuilt, giving the cathedral a slightly asymmetrical look! 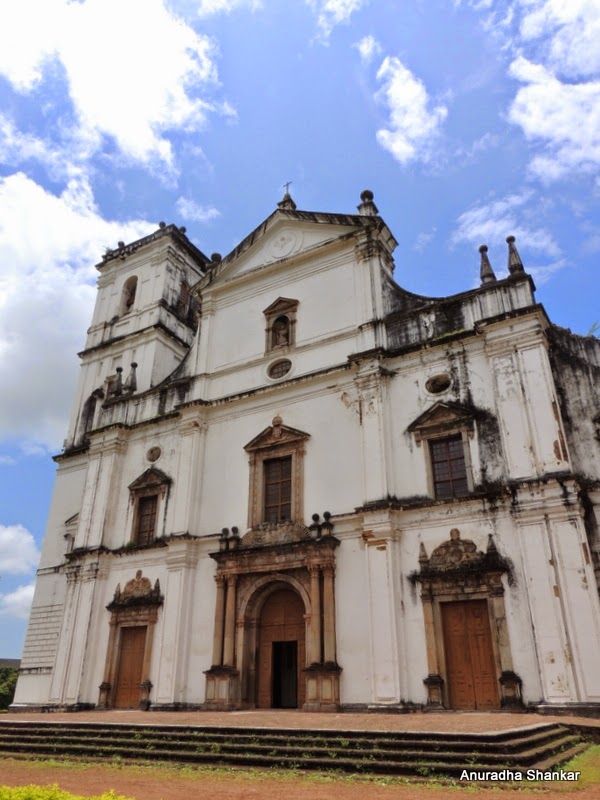 Inside, the main chapel is dedicated to St. Catherine, and all around are depicted scenes of her martyrdom. Apart from this main altar, there are eight chapels and six smaller altars, each of them with intricate and detailed work, and ancient paintings depicting the life of the saint as well as scenes from the Bible. 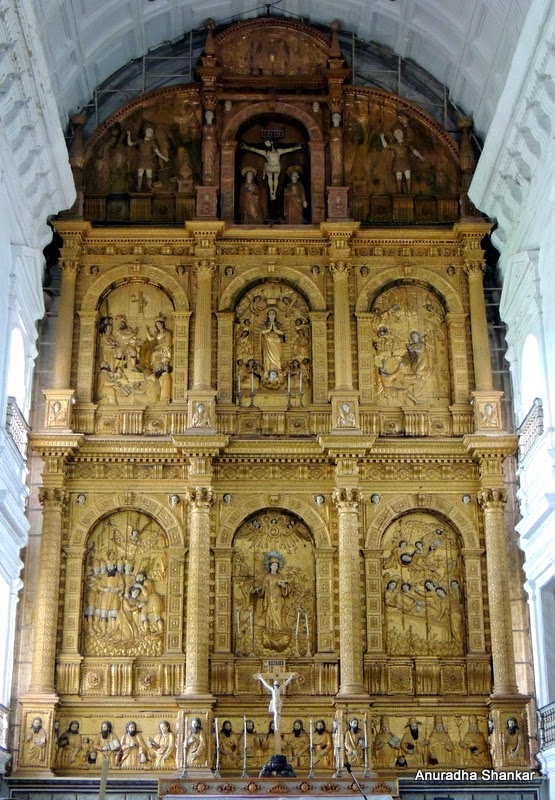 The Sé Cathedral also houses a baptismal font, made in 1532, believed to have been used by St. Francis Xavier to baptize thousands of Goan converts. The font is one of the few things which still remain from the original church which first stood here. And it is here that the sacred relics of the saint will be on display for the general public during the exposition.


The Church and Convent of St. Francis of Assisi are right behind the Sé Cathedral. This Church, unlike the other two, is simpler, but filled with ancient paintings, while the convent now houses a museum, run by the Archaeological Society of India. Within the same complex is the erstwhile Palace of the Archbishop, which also houses a museum exhibiting some ancient artifacts from the churches.

A narrow lane from here leads to the Chapel of St. Catherine, which is one of the oldest structures, dating back to 1510. This church is no longer in use, and thus, in a sad state of neglect.


A short walk away is the Church of St. Cajetan, built in 1661, by the Italian Friars of the order of Theatines, and modeled on the design of the Basilica of St. Peter in Rome. Nearby are two interesting arches – the Viceroy’s arch, commemorating the Portuguese conquest of the city, originally built in 1597, but completely restored in 1954; and a simple arch, which is all that is left of the original palace of the Adil Shah, which stood here before the arrival of the Portuguese.

The Church of St. Augustine must have once towered over the city, but today, all that remains is a portion of the façade, which can still be seen from quite a distance.

The Church of Our Lady of the Rosary is among the older churches, and though simpler than its counterparts, equally beautiful.

St. Francis Xavier is said to have been sent to India, to bring back into the fold, the Portuguese who had become wayward in the matter of faith. He managed, not only to fulfill his mission, but also to espouse the cause of Christianity in the region. That his efforts bore fruit can easily be seen, from all these churches, which still draw in the faithful. That his legacy lives on, is clear, when his relics still draw people across religions!

Other Articles on Goa: