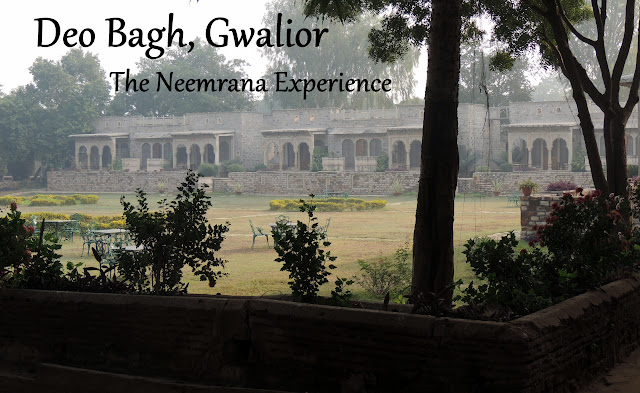 I opened the door, shivering slightly as I felt the winter chill, despite my layers of clothing. A peacock ambled past, and I reached for my camera, all set to follow it, the cold completely forgotten. The peacock, however, was much quicker than me, and by the time I had carefully navigated the short stretch of lawn, it had disappeared into the bushes.

I simply stood there, looking at the contrasting scene around – behind me was the neatly laid out garden, around it the quaint rooms which made up the hotel; and right in front of me was a wilder version, the grass and trees allowed to grow untamed, hiding behind them vestiges of history. “This is what the place would have once looked like” I thought, and felt rather glad that it had been allowed to remain the same. That was the moment I knew that I had made the right choice – that I was going to enjoy my stay, albeit a short one, at Deo Bagh, the Neemrana property at Gwalior. 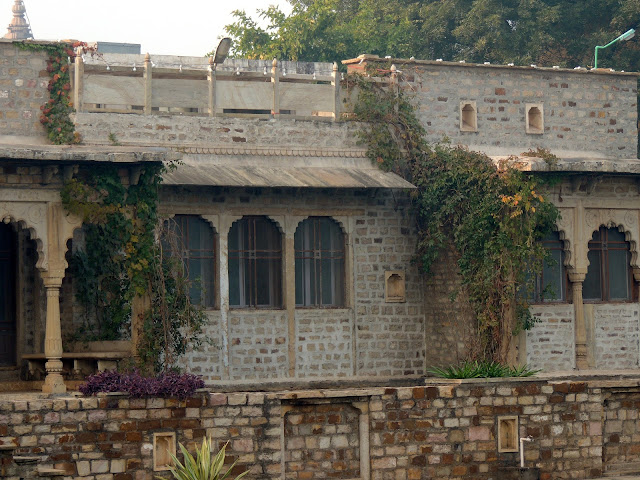 Heritage lost in wilderness is something we see often in our country. However, these lack maintenance. Those which are cared for, and well maintained, soon find themselves in typical surroundings, usually huge, sprawling lawns, which eliminate any sense of mystery. A balance between these two states is something we see rarely, which is why it was such a pleasure to see how seamlessly this balance has been maintained at Deo Bagh. Ancient cenotaphs stand within the complex, visible from all the rooms, yet subtly separated by the wilderness growing around. Most guests only venture as far as the Baradari – the perfect place to sit and watch the peacocks, the spires of the cenotaphs visible over the trees, and enjoy the breeze.

A paved path led us – me and Samhith - to the family temple of the Jadhavs who own this property. The Jadhavs were once counted among the “big 5” Sardar families of the erstwhile Gwalior state. The present owners are their descendants, some of whom live in one section of the property. The temple is only opened early in the morning for prayers, and is closed for the rest of the day. We contented ourselves with a look at the Nandi who guarded the door to the shrine, and headed towards the cenotaphs instead.

The cenotaph of Sardar Deorao Jadhav was the one which commanded our attention. Built around 1856, according to the family records, it is certainly among the most impressive structures we saw in Gwalior. The intricate workmanship speaks volumes about the talent of the artisans, even during this period.

The most fascinating thing about the cenotaph, for me, were the sculptures on the outer walls. This was the first one I noticed…. 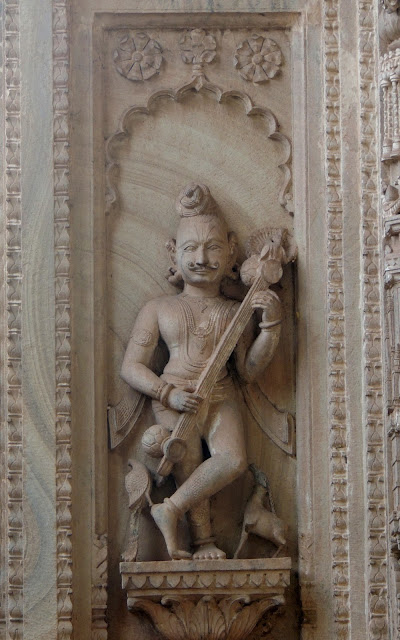 He held some form of the Veena in his hands, and animals and birds seemed to be listening to him. I wondered who he could be, till it struck me… could he be Narada? Narada is rarely seen on temple walls, so this was a wonderful discovery. Plus, he is depicted with a moustache! Our TV and Amar Chitra Katha depictions of Narada have so instilled in me the idea of Narada as clean shaven, that this was a big surprise!!!

We eagerly walked around trying to identify the other depictions, and the surprises continued to pile up… Here are some of them…

It was very interesting to see this combination of depictions on the walls of the cenotaph. The mixture of Shaiva and Vaishnava imagery suggests that the Jadhavs were devotees of both, Shiva as well as Vishnu. 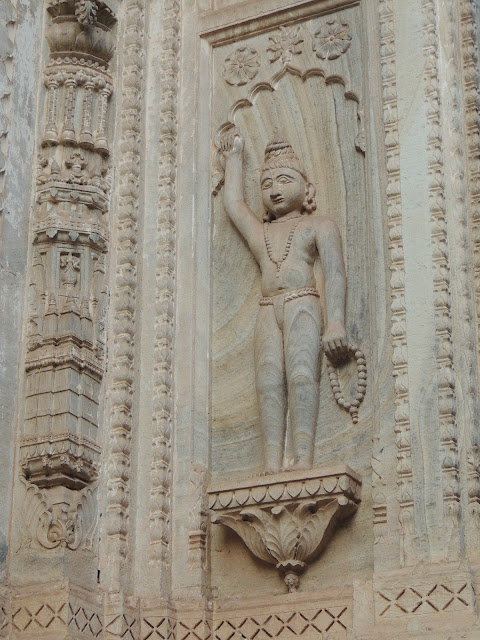 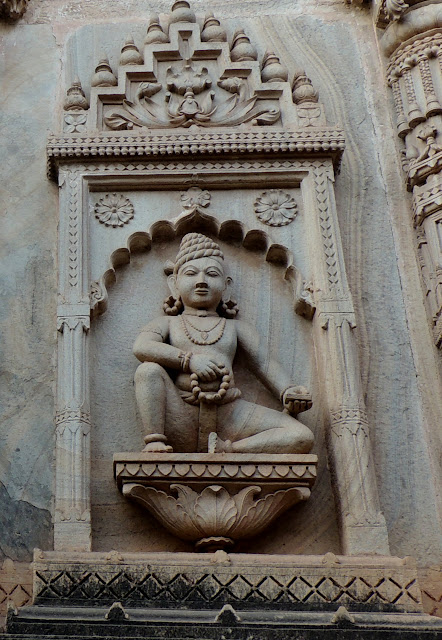 They look like saints, going by the pose they are depicted in, and since they hold an akshamala (rosary) in their hand. Their hair is wound in a jata, but in different styles, and while most of them sport a ‘namam’ (mark of a Vaishnavite) on their forehead, there is just one, in a niche on the top level, where he has on his forehead, the mark of a Shaivite – the vibuthi with kumkum in the centre. 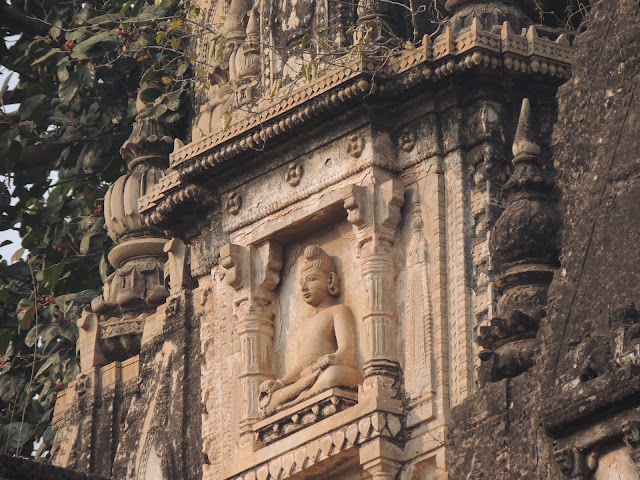 I wonder if these saints are from the Nath Sampradaya, which was popular in the region during this period, and actually depict specific saints. Wish I knew more about them!

On the pillars which flank the entrance, are these figures…. 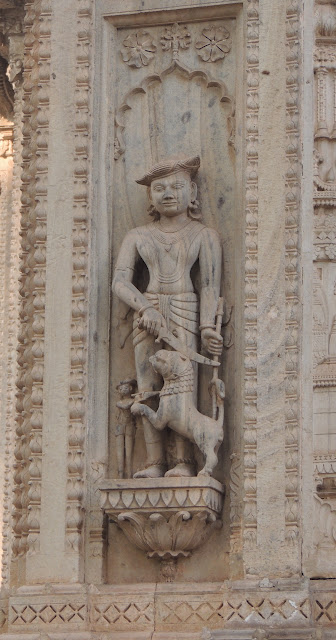 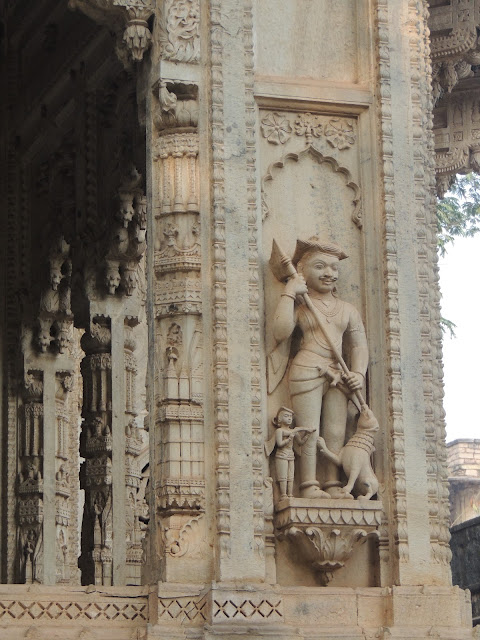 They are guardians, but also probably depict the Jadhavs themselves, as the style of their clothing suggests. Besides, they are shown killing lions, which suggests their royal lineage.

The connection with lions and royalty is also visible on the arch which connects these pillars…. 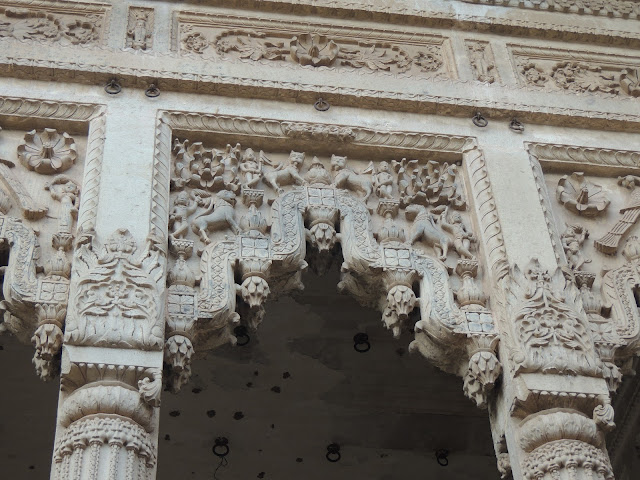 Next to the male figures, on another side of the pillar, are these…. 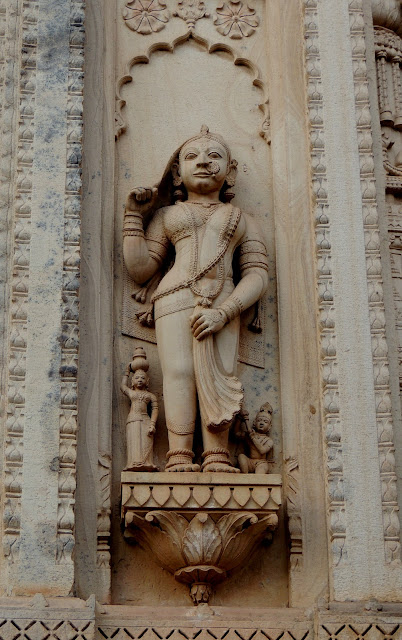 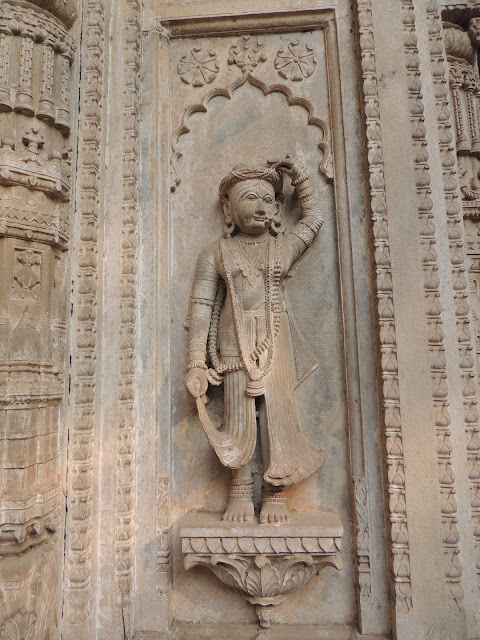 The royal women???…. Notice how intricately their clothes and jewelry are depicted, and how delicately the woman in the top pic holds the edge of her saree with her right hand, and the pleats with her left. Also notice the small figures on her sides… the one on the right is obviously Krishna, and the one on the left is either Radha or one of the Gopis… the lady must surely have been a Krishna devotee?

The main sanctum was closed, but the Nandi which faced it was also an interesting one, with the twin snakes on its shoulder….. 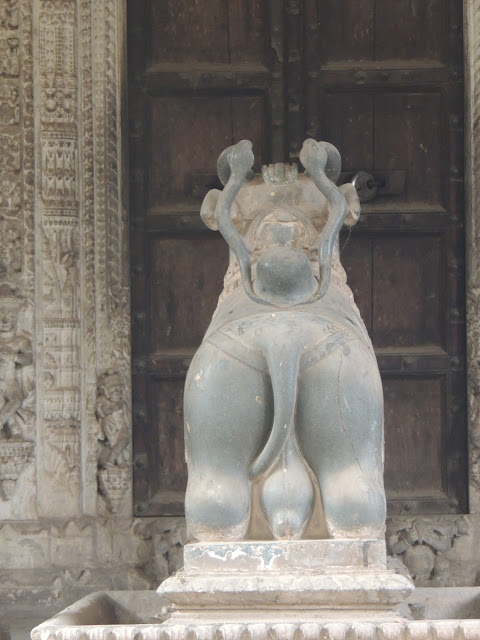 There were other cenotaphs too, but none as grand or intricate as this one. Besides, we had lots more to see in Gwalior, so we chose to cut short our exploration of the property.

Our breakfast was interrupted by frequent excursions to click peacocks, which elicited quite a few smiles from the staff. They were obviously used to their guests being fascinated by the birds! It was tempting to simply sit back, relax and enjoy the view at Deo Bagh, but we had lots to see in the city.

Returning after a busy day walking around, seeing the sights, I gladly sank into one of the chairs on the porch, and simply watched the rest of the evening fly past, while Samhith went looking for peacocks once again!

During the trip which followed, we saw many wonderful monuments, some even World Heritage Sites, but the cenotaph we saw at Deo Bagh was just as interesting as any of them. It was certainly among the most recent of monuments, built just over a hundred and fifty years ago. However, the blend of architectural styles, as well as the blend of beliefs, that too in a monument built as a memorial, was not just fascinating, but also thought provoking. And to think I wouldn’t even have seen it, if I hadn’t stayed at Deo Bagh!! What a loss that would have been!

And that was the day we spent at Deo Bagh, a day made possible by the gracious staff at Neemrana, who arranged it at short notice, despite it being one of their busiest periods. It was a trip planned on the spur of the moment, inspired  by the invitation from Neemrana, which turned out to be one of the best trips we have taken in a long time. As my son, having experienced their hospitality at Tharangambadi earlier, says, “It’s a Neemrana experience after all!”


Please Note: My stay at Deo Bagh was on invitation from the Neemrana Group of Hotels. I combined the stay with a personal trip, and payed for everything except the stay. The views expressed here are my own, based on my own experiences.