January 09, 2018
The Narmada flows down the mountains, carving out a path for herself as she makes her way down to the plains of Central India. She cascades from the rocks, her fine spray making it appear as if billows of smoke (dhuan) arise from the flowing streams of water (dhaar), giving it the name Dhuandhar.

The force of her flow creates a gorge, smoothening and carving out the rocks into fantastic shapes, the pure white of the rocks standing starkly against the shades of the water. It is a joy to cruise down the river in a boat, seeing the natural contours created by the river, now famous as the Marble Rocks.
We are at Bhedaghat, located on the banks of the Narmada near Jabalpur, where thousands of visitors turn up to see these natural landscapes, creations of the sacred Narmada, and pay obeisance to her. 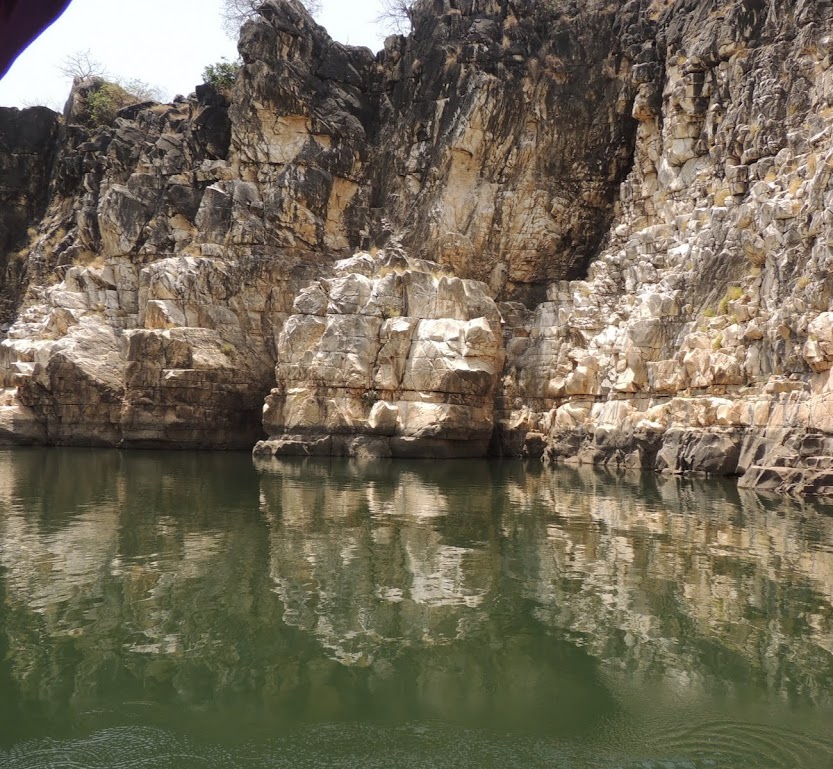 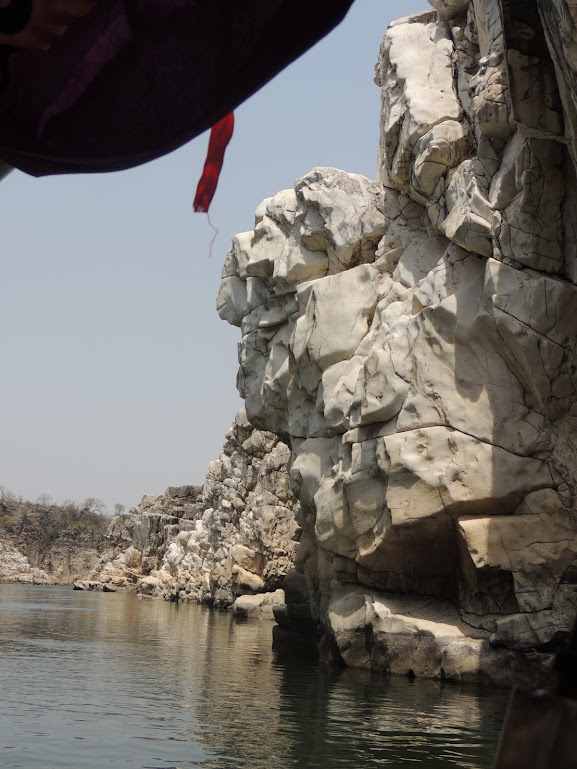 However, to me, the most interesting thing about Bhedaghat, isn’t the falls or the rocks, or even the river. What makes Bhedaghat special is the Chausath Yogini Temple, which is situated atop a small hillock on the riverbank. 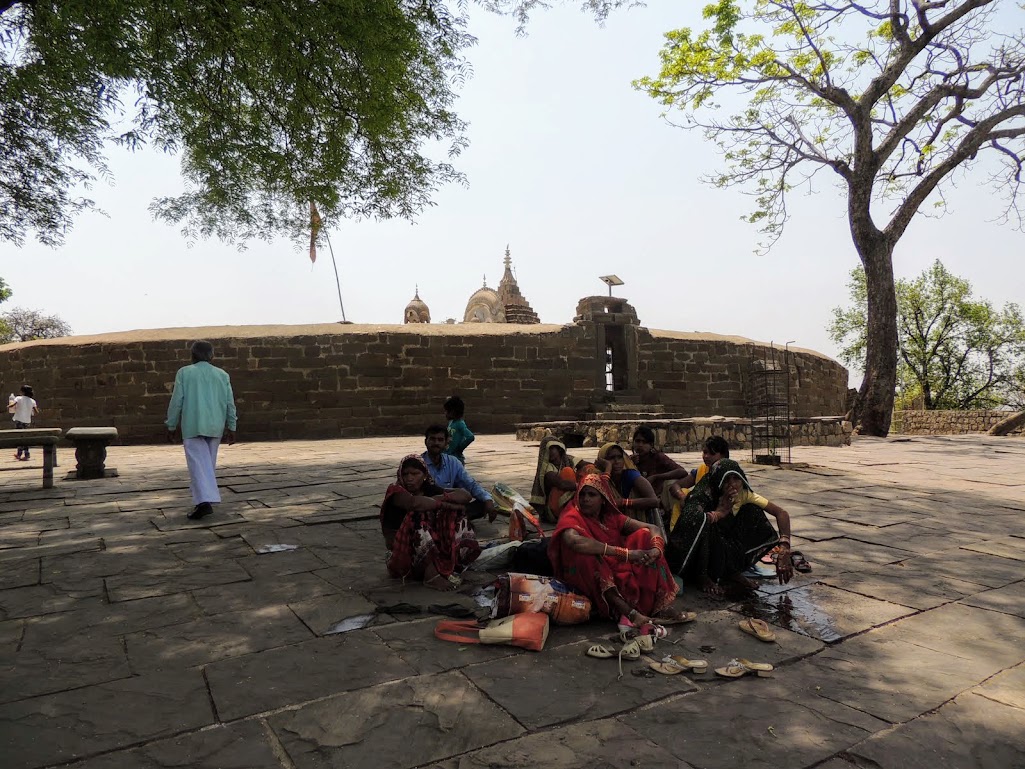 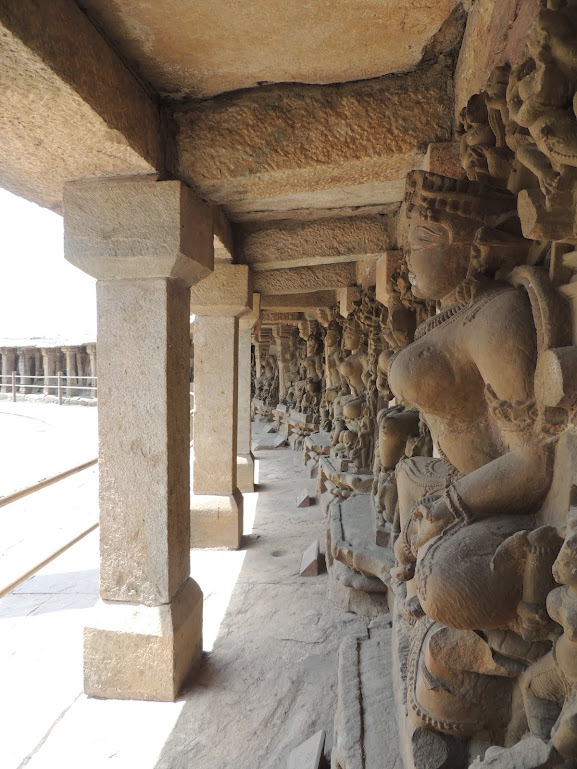 The temple at Bhedaghat is circular, and open to the skies, as are most Yogini shrines. It is located atop the hillock in such a way that it isn’t even visible, either from the river, or from the base of the hill. You have to climb up the steps to even get a look. Of course, in earlier times, there would have been a clear line of sight as we approach, and we might have caught a glimpse of the temple as we did at Mitawali, but that is simply speculation. 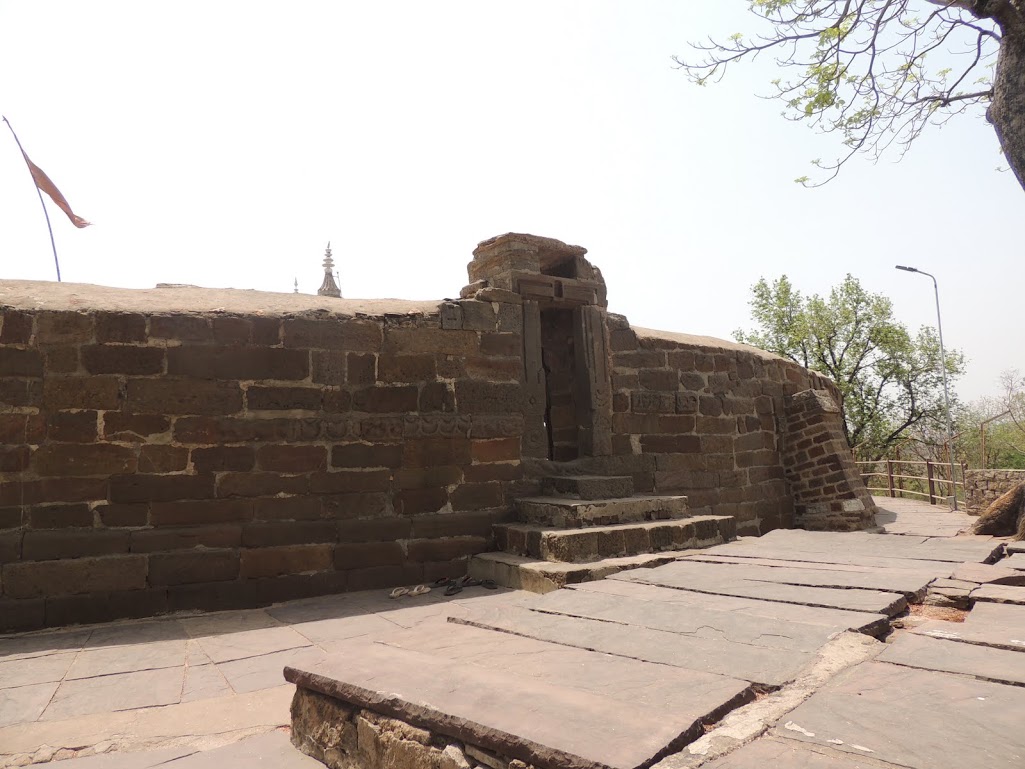 Very interestingly, there are 81 niches holding images of the Yoginis here. Therefore, technically, this isn’t a Chausath (64) Yogini temple, but an 81-Yogini Temple. According to Dr. Vidya Dehejia, who has done extensive research on Yogini temples, the grouping of 81 Yoginis was specially intended for royalty, and she suggests that the temple was built by one of the Kalachuri Monarchs in the last quarter of the 10th century, to establish dynastic stability.

Among the Yogini temples that we know of, this one at Bhedaghat is the largest, with a diameter of 125 feet. The circular structure is open to the skies, as with all Yogini temples, though the pillared colonnade which forms the circular shrine is covered to preserve the deities from the elements. 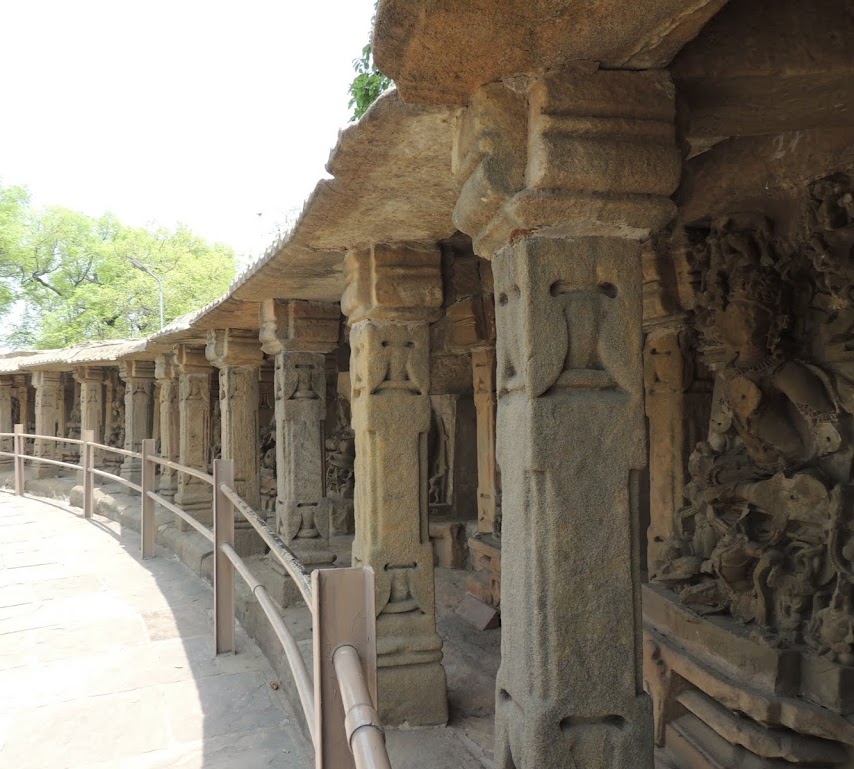 Originally, there would have been a shrine, right at the centre of this structure, with an image of Bhairava. Today, there is no sign of this shrine, but a temple to Shiva as Gauri Shankar stands here, slightly off centre. This temple is believed to have been built about two centuries after the original Yogini shrine. In the sanctum stands an exquisite image of Uma-Maheshwara, or Shiva and Parvati seated together in an embrace. 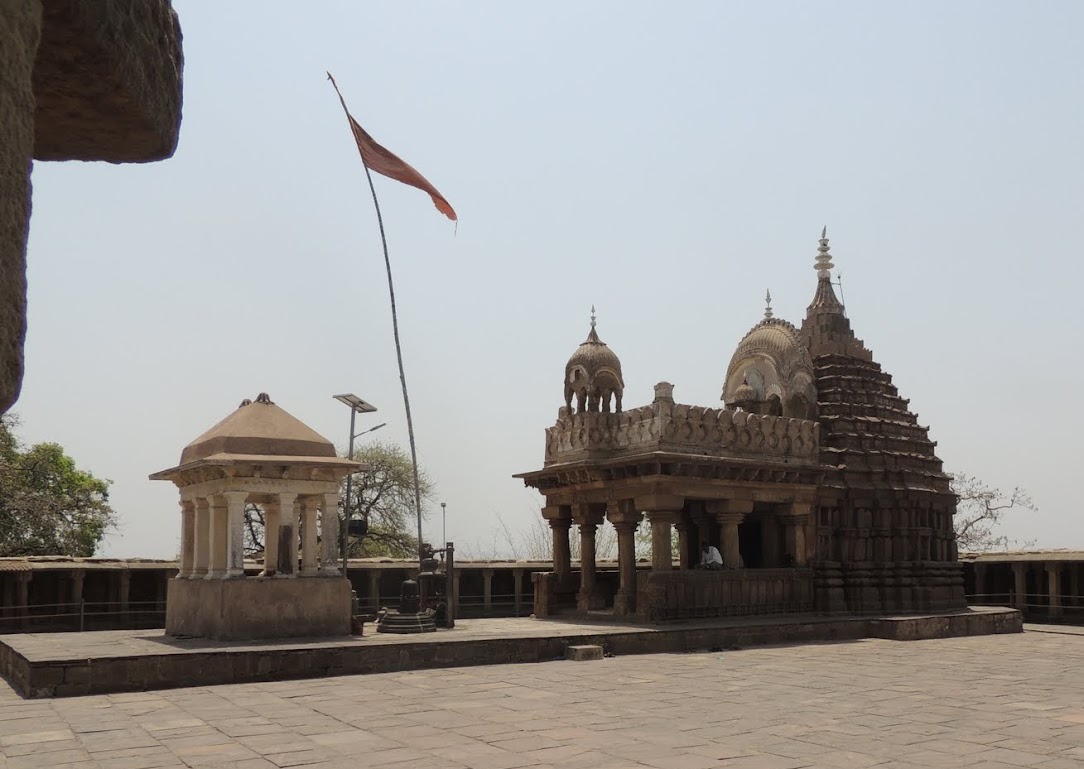 The Yoginis of Bhedaghat are slightly over life sized, and are shown seated. Dr. Vidya Dehejia’s description of these Yoginis in her book is worth repeating here….

“Bhedaghat’s Yoginis are mature, voluptuous beauties, generously endowed with ample hips and heavy…breasts, that make us realize the poetic descriptions of the beauty of Parvati, burdened by the weight of her breasts. Bereft of an upper garment, the Yoginis are ornamented with multiple strands of necklaces and garlands, and they wear a variety of armlets, bracelets and earrings. Slung low on their wide hips, is a jeweled girdle from which is suspended a transparent skirt that reaches down to their ankles. Often, its presence is indicated merely by a line above their jeweled anklets, while at other times, the designs of the fabric or its folds are in evidence. Each yogini has a halo indicating her divinity, and all of them have multiple arms (between four and eighteen), reinforcing their divine status. Their unsmiling countenance adds to their air of quiet dignity and majesty.”

Among the 81 images which once adorned this temple, many are missing. Some images from an earlier temple here, including a set of Matrikas, as well as some from the original central shrine, such as Ganesha, have been placed in some of the niches. In all, according to the count provided by the ASI at the site, there are about 95 images here.


Among the original images, most are broken, beyond recognition, and only a few are intact enough for clear identification. Despite all this, what remains is impressive enough to give us an idea of just how stately and imposing the images must have been.


It is interesting to note the symbolism attached to each Yogini, not just through her face/ figure or attributes, but even the seat she sits on, the animal/bird seen as her vehicle, and the figures which surround her. We can go on and on talking of each such detail, but that will make this post interminable.


Look closer at these images of some of the notable Yoginis here, and see what details you can notice, despite their condition…


These are just some of the Yoginis who caught my attention. If you would like to see all of them, here is a video, with the names of the Yoginis as given on site.

Few people know about this temple, though the hillock overlooks the Marble Rocks that draws hordes of visitors. Most people who visit the temple today are pilgrims, here to visit the Gauri Shankar temple. The Yoginis are merely curiosities, strange figures with animal and bird faces, who are more often than not, ignored. It was just 10 AM when we arrived, but the hot summer sun was a distinct hindrance to exploring the temple. The walking path was blazing hot, and as we hopped, skipped and jumped to avoid the heat, the priest at the main temple called out, telling us to wear our slippers, but reminded us to leave them out when we entered the central shrine!

I had already visited three Yogini temples before visiting Bhedaghat – the one at Mitawali where not a single Yogini image remains, the one at Khajuraho which is the only rectangular Yogini shrine, where also no image exists, though I saw a couple of them at the museum; and the Hirapur temple in Orissa, which was almost intact, except for a few damages (but which I have yet to write about).

While Hirapur was almost a miniature shrine, the one at Bhedaghat was larger than life. However, it was the attention to detail which stood out, despite the size of the images. The Yoginis are not just slightly larger than life-size, they appear to be larger than life too, yet so well detailed, and so realistic, that it wasn’t difficult to imagine them come to life.

I could almost imagine, for a moment, these sculptures, intact, each Yogini seen completely, each with her unique features and attributes. The experience of standing at the centre, feeling the presence of 81 such figures, spirits or deities, whatever we choose to think of them as, is something beyond description – something you have to go see, experience, and yes, imagine, for yourself!