June 28, 2010
Can you imagine being woken up at 5 AM by the peacock calling out to its mate? This is just what we experienced when we visited Morachi Chincholi last weekend. No, this village is not somewhere deep inside a jungle, but is just a 4 hour drive from Mumbai, 50 Kms from Pune.

I heard of this place more than a year back, through an article in the newspaper. It was amazing to hear that there were hundreds of peacocks in a place so close to the city, and I wanted to visit it at once. However, planning a holiday and going for it, are two different things, and the trip never materialized, though I passed Pune umpteen times during the last year. Every time I passed the city, I made a mental note to stop and visit this village, at least a short visit, but it never happened! Finally, a wonderful opportunity landed on my lap when Breakfree Journeys announced a trip to the village.
Breakfree Journeys is a new adventure and rural tourism initiative, undertaken by a young, enthusiastic chap named Rushikesh Kulkarni. I first read about them sometime back on an article on rural tourism and later stumbled across their blog, and began to follow it. this turned out to be a boon, for I was among the first to see their announcement, and lost no time in signing up – me and Samhith, that is…. Shankar was too busy, and in fact, quite happy that I was going with a group, and wouldn’t pester him for this place again!
There were ten of us in all, and thankfully, one of them was a 12 year old, so Samhith had some company. We started off in the evening on Friday, and reached Morachi Chincholi in time for dinner. We had been delayed a bit, having veered off the main road in the darkness, but the whole family welcomed us warmly. They had prepared dinner, but were waiting for us, instead of going on with theirs. It was obvious that we weren’t just tourists to them, but valued guests, and they treated us just like family! Even Samhith was comfortable at once, and he tried to strike up a conversation with aji, the grandmother, even though she knew no Hindi or English, and he knew no Marathi! 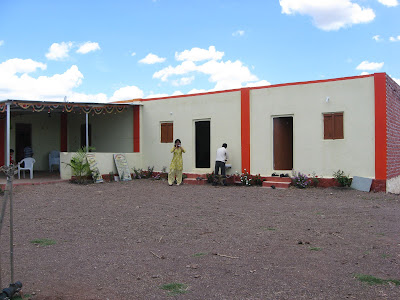 Aji of course was no stranger to this, for most of the visitors to her rural home don’t know Marathi! Yet, she manages to communicate with them, via her sons or grandsons! She told us of the time a Japanese lady was visiting, and they had a big communication problem. Finally, she called up her nephew in Pune who translated for both of them via the cell phone! Thank God for such devices which help bring people closer.
The whole conversation with aji was held in the kitchen. Aji spoke as we watched her cook on an ancient mud stove, something none of us had seen before. Even as she chatted with us, asking us where we were from, whether we were married, had come with our husbands, how many children we had……., her hands worked steadily at the Bhakris she was making for us.

Dinner was typical rural Maharashtrian fare – Bhakri (thick chapatis or bread made of white millet flour), matki (a dish with sprouts), turi chi Bhaji (dish made with ridge gourd), daal (pulses) and Bhaat (Rice), and all of us tucked in with gusto. Of course, we could barely eat half a Bhakri, while they finished off two each. As for Samhith, he had a hard time finishing off his small portion, but enjoyed the Daal Bhaat, especially with the wonderful homemade ghee they served with it! He liked it so much, that when we left, he asked them if he could take some home! Unfortunately, they didn’t have any extra, otherwise we certainly would have returned with some!
While we spent some time chatting up our host and asking about the peacocks, Samhith and his new friend discovered the joy of sleeping in the open air! It brought back memories of my childhood in when we used to sleep out in the summer… gone are those days… but it was wonderful to re-live those memories in this small village.

Our host asked us to go to sleep soon, so that we could be up at the crack of dawn when the peacocks arrived, but just then one of them let out a cry, and all our sleep disappeared, as we strained our eyes in the darkness just to catch one glimpse of the birds! Finally, we gave up and went to sleep, still hearing the birds in the distance….
Did we see any peacocks? Yes we did! But you have to wait for the next part to see them!
Information:


We stayed at the residence of the Thopates. Their home stay is approved by the Agri Tourism Development Corporation, and is named 'Mauli Krishi Paryatan Kendra'. They can be contacted through their website - http://www.chincholimorachi.com/