June 29, 2010
Please read the first part of this series at Morachi Chincholi - Part 1
It was difficult to sleep considering how excited we were, but the wonderful weather and the sounds of the night lulled us to sleep, and we were soon lost to the world. Not for too long, however… we were awakened at the crack of dawn by the peacocks emerging from their hideouts and calling out to their mates. Rushikesh knocked on our door to tell us that there was one just outside our window and we rushed to peep out, scaring the poor fellow away! 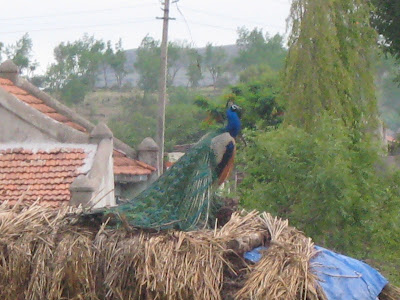 One by one we filed out of the room, cameras in hand, ready to spot and capture the birds on film. It wasn’t so easy, however….. The villagers were so used to them that they hardly paid any attention, going about their morning duties as usual. The peacocks therefore felt comfortable around them, and went about their feeding and other chores without any fear. A group of ten enthusiastic city dwellers was another matter, and they were rightfully scared of us. They retreated to a safe distance from where they observed us as potential threats, while we restlessly tried to get some good photographs. Every time one of them approached, and we stood up or moved to get a better look, they retreated, and we were left with blurred shots of the beautiful birds. Our host kept telling all of us to sit down and not move at all. The birds were used to cameras, he said, but from a safe distance away. It was only because we moved towards them that they panicked. We finally managed to overcome our enthusiasm and stayed seated, and soon they approached the area where grains had been spread out for them to eat, and went about their feeding, but with a wary eye on us. 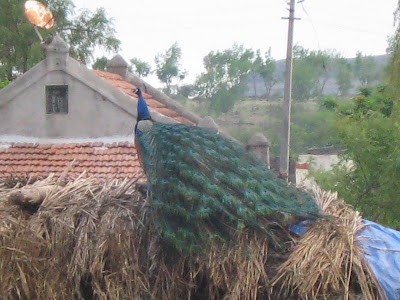 We were wondering if any of them would dance at all, when the peacock nearest to the house suddenly fanned out his tail feathers and began moving in such a graceful manner, that we were left spellbound! Some of us rushed into the bus to take better pics hidden inside, but I was just too awed to move. While I had seen peacocks before, this was the first time I had seen one dance, and the experience was just unforgettable! 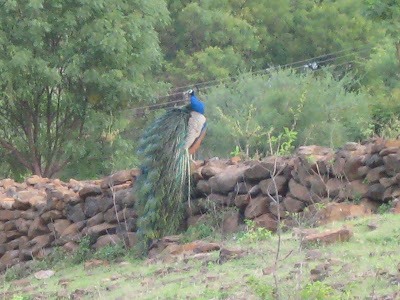 According to our hosts, a pair of peafowl had arrived at this village many years back. The villagers were kind people who welcomed them, and shared their land as well as grains with them. Over the years, they have multiplied, and today, the count stands at over 2000! Of course, they are spread over a huge area, so we didn’t really see many of them….in all, I think we saw 4-5 peacocks and more than 10 pea hens. These are the regular visitors to the farmhouse we visited. Needless to say, there are such regular visitors to every farm in the area! 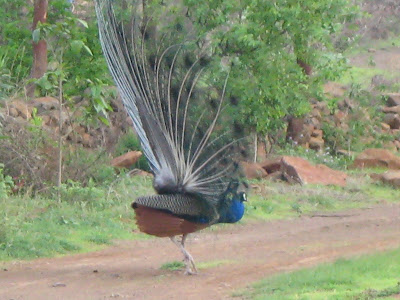 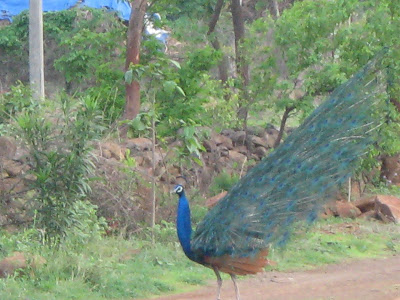 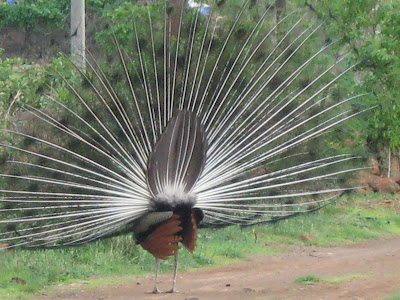 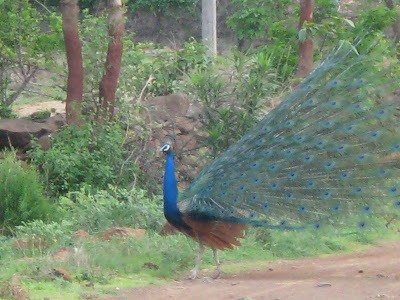 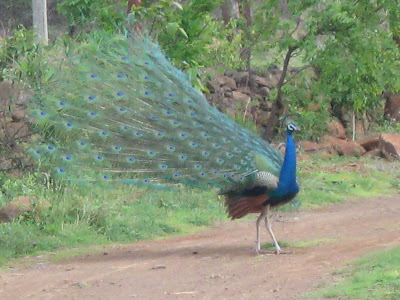 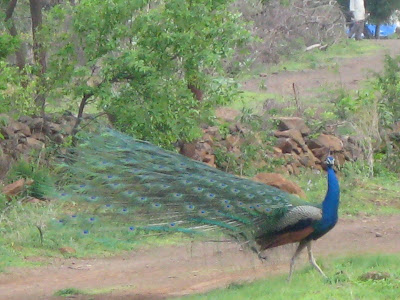 Among the peacocks we saw, there was one which seemed to overcome his fear and came quite close to us, perching atop a shed made for storing hay, getting down now and then, to dance a little for his beloved. She seemed to be least bothered about him, and went about searching for grains along with the other pea hens. Our fellow kept a keen eye out for her, and gave a raucous cry and fanned out his magnificent feathers every time she approached his area! 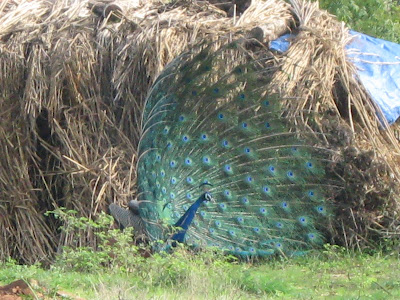 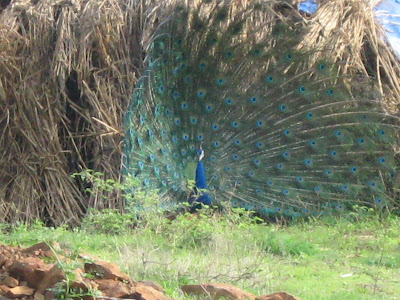 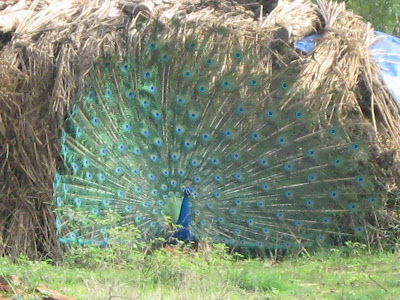 Each peacock seemed to have his territory marked out, for no other male came anywhere near him. A little away, the other side of the field seemed to be the territory of another male, who seemed to be on the verge of sealing his union with a female. She kept close to him as he danced, turning this way and that, and she moved along with him. We watched eagerly from a distance, careful not to go any closer, but she seemed to be aware of us, and probably resented our curiosity, for after more than an hour of courtship, she simply moved away. The male seemed to be confused, and waited for a while, calling out now and then, even perching on a nearby tree to wait for her, but finally gave up when she did not appear despite his repeated entreaties. We really felt like interlopers! 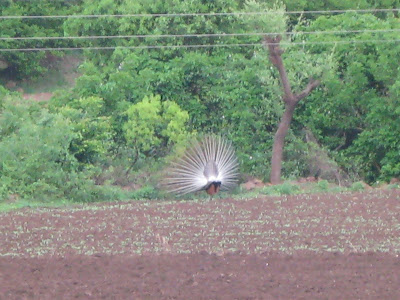 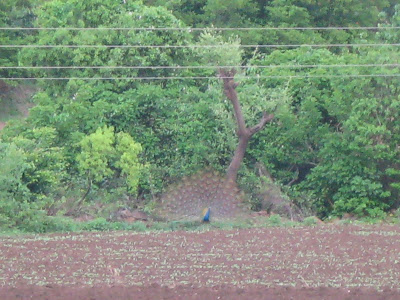 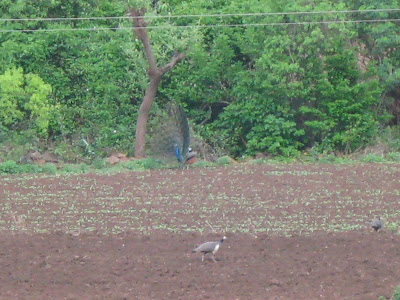 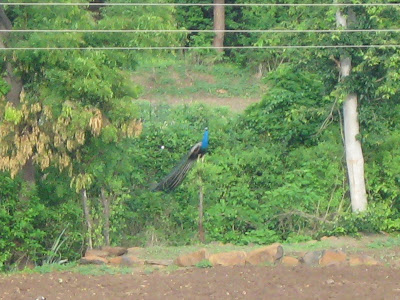 Meanwhile, even as this courtship was in progress, another male walked by the same field. There were a few pea hens around, but this fellow seemed to be least interested in them for he simply walked away without a glance at them! He was the only one who seemed to go all over the place, without bothering about the presence of others – his own kind or humans! 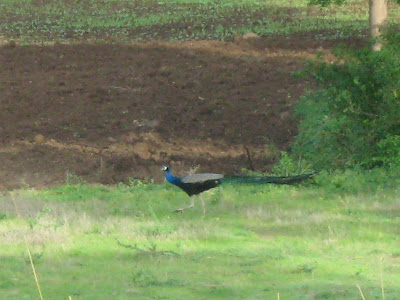 While we adults were busy trying to get some decent photographs of the peafowl, and also trying to understand their behavior, Samhith decided to go off and explore a swing tied to a tree….. Suddenly, he ran up shouting – ‘Amma, amma, peacock! Peacock!” Excited as he was, it took us a while to understand him, but it turned out that a peacock had wandered quite close, oblivious to his presence. They suddenly found each other face to face, and both were shocked! While Samhith ran back in alarm, the peacock lost no time flying a safe distance away!” This is one encounter he is sure to remember! 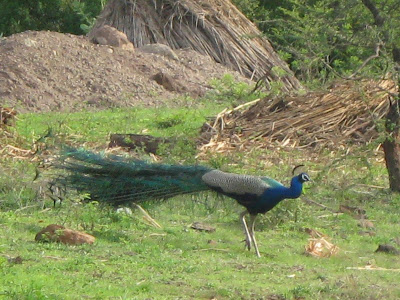 We were so engrossed in watching the peacocks that we didn’t even realize how swiftly the time had passed. We had spent more than 4 hours watching the birds, with just a cup of tea to fortify us. It was only when the sun climbed higher and the birds retreated to their sanctuaries somewhere in the bushes that we became aware of our hunger, and returned to the house for the hot and tasty Pohe (a typical Maharashtrian breakfast dish made with parched rice) that aji had made for us.
The peacocks wouldn’t be back till the sun went down, and it cooled down a bit, so we had lots of time to kill before lunch. We were supposed to return to after lunch, so it was goodbye to the peacocks this time! As to what we did in the time we had left, look out for the next part in the series! 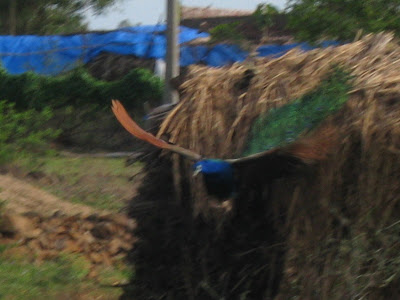 Meanwhile, take a look at these two videos I managed to capture of the peacocks dancing…. Unfortunately, the quality doesn’t seem to be very good, which is why I have put these up at the end of the post. But it will give you an idea of what it was like…… It really is time I buy a new camera! What do you think???? Suggestions for a medium-priced better camera are welcome!