June 19, 2010
Rows and rows of shops lined the road. Most of them sold items for puja, not surprising, considering that this was a temple town. Mounds of Kumkum, deep red in colour had been arranged carefully, resembling huge lingams. Each had an image of a deity fixed near the top. As I stopped to click a picture, I wondered how the shopkeeper managed to sell the Kumkum without destroying the shape, and then noticed that this was just the front of the mound. Behind, the Kumkum had been scooped out, carefully leaving the façade intact! 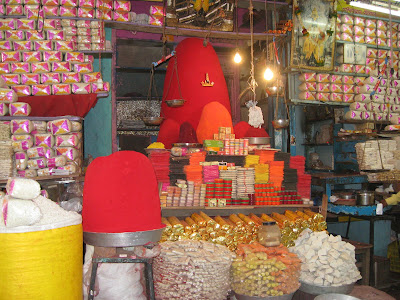 Apart from the usual flower and coconut sellers, there were also a huge number of shops selling photos of various gods and goddesses, all in old fashioned wooden and glass frames.Obviously, no one was interested in laminations! 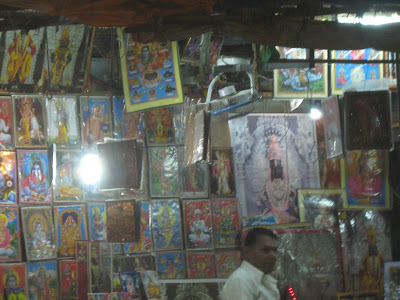 The most prominent among all these shops were those selling fancy articles for women – earrings, chains, and the like, but mainly bangles – glass bangles. I was sorely tempted to stop and buy some, but we had no time… there was much to do, and I passed on. 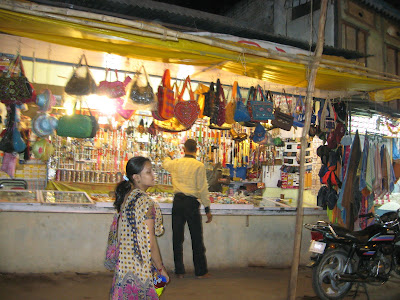 In the midst of the noise from the crowded shops came the sounds of singing – abhangs – Marathi songs sung by the saints, venerating Vitthala and Rakumai. Lifting our heads to see where the sounds came from, we could see the crowd of people waiting in the lines in a seven storeyed building. the building has been built just to accommodate the crowds who gather here everyday, and people patiently await their turn, signing songs to while away their time and keep themselves engaged, not knowing how long it would take for them to get darshan of the lord they had come to see.
As we bypassed the crowds and were led towards a side entrance so that we could directly enter the main part of the temple, I realised that I felt guilty for having gone ahead, while thousands were probably waiting in the queue, their devotion much, much stronger than mine! 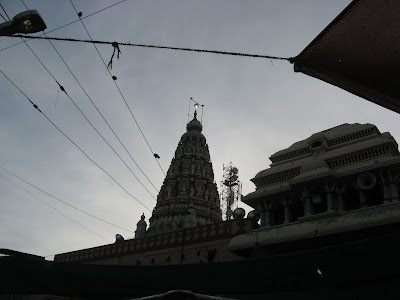 We were visiting the at Pandharpur, with an old uncle, who, through his connections had arranged for a special darshan. Owing to his age, he couldn’t possibly wait for hours in the queue, I told myself, justifying our special entry, and tried to make the most of it, since I probably wouldn’t get such treatment ever again! 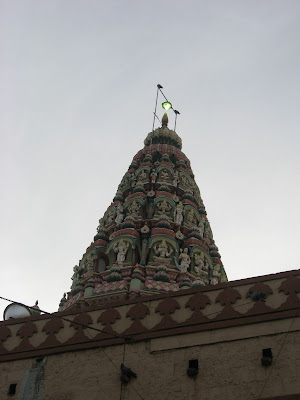 As we walked into the temple, led along corridors where the normal populace wouldn’t be allowed, I noticed that while the main, central part of the temple was made of stone, the extensions had been made of wood. While the sculptures on the stone weren’t as intricate as those we see in our grand temples of the south, they were beautiful by themselves, and as to the wooden parts, the walls were covered with paintings, both old and new, depicting stories of Lord Vitthala, and the saints who sang of Him. I wished I had more time to spend seeing them, instead of having to rush inside for darshan! What a situation – if I went in the queue, I would have to wait for hours, but wouldn’t even get a glimpse of these works of art, and now that I was actually being taken through these corridors, I didn’t have time to stop and enjoy them!
We wound our way through the corridors to the inner sanctum where the lord stood, with his hands on his waist, and hurried to press His feet with our hands, a privilege permitted only in this temple. I had visited the temple earlier too, but this time, thanks to the VIP treatment, we weren’t pushed roughly aside, and I was able to feast my eyes on Him to my heart’s content, ignoring the demands of money by the priests. Yes, our special status did not diminish the demands made by the priests, but only seemed to make them even greedier than they normally are.
The priests at Pandharpur are notorious for their greed – they start hounding visitors right at the entrance, promising a closer and faster darshan at rates beginning from a few hundreds, ranging to thousands, depending on what they judge the devotee will be ready to cough up! The demands don’t stop there, but continue right till one reaches the deity, with all the money placed at His feet making their way, not into the coffers of the temple, but into the pockets of the priests themselves! I had decided not to give any of these people any money, and put my offerings in the Hundi, hoping that it would be used by the temple, but even that is doubtful, for it is the priests who rule the roost here, not the temple committee.
The temple does have a government authority overseeing the management, but it is obviously a threat to the priests who oppose it tooth and nail. From what we heard, there seems to be a permanent bone of contention between the two groups regarding the use of the money, and they are always at loggerheads. The temple management has an office not inside the temple, but just outside, where one can give donations and get a receipt. Here, we can also specify what we want to donate for – food distribution (Annadhan), temple cleaning and maintenance; or for some specific item for the Lord.
This is one of the few temples where Lord Krishna lives apart from his wives – the sanctum of Rakumai (Rukmini) is in another part of the temple. Just outside her sanctum are two smaller ones – of Radha and Satyabhama. Though the sanctums of Radha and Satyabhama are side by side, and that of Rukmini is separate, the priests interestingly mention them in the order in which they appeared in Krishna’s life – Radha, Rukmini and Satyabhama, or as the priest put it – ‘Rai, Rakumai ani Satyabhama’. Again, interestingly, all the three idols are in standing posture with their hands on their waists, just like the lord. The idols of the goddesses are the same size too, and about a head smaller than that of the Lord.
Thanks to our uncle, we were also able to attend the Kakad aarti – the first aarti to the lord, performed in the early hours of the morning. We were at the temple by 3:30 AM, and were once again led into the temple by our guide. The door to the sanctum was opened at 4AM and we took our place just outside the sanctum, waiting for the aarti to begin. Gents were allowed right inside the sanctum, and had the good fortune to sit right near the feet of the Lord.
The aarti began with the lord being woken up with a song. It was interesting to note that the Lord was treated exactly like a child – he is, after all, believed to be the young , who stands here in this form! His teeth were brushed, his face was washed and, after the first preliminary aarti, he was given an elaborate bath. The abhishek was performed with not just the normal items like milk, curd, water, oil etc, but he was also cleansed with a red coloured mixture of fragrant herbs called ‘utane’ in Marathi which is used traditionally for bathing! Once the lord was dressed and ready, the main aarti was performed, amidst the chanting of mantras, and singing of abhangs. 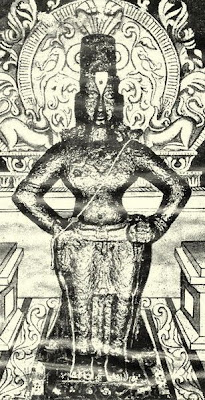 The aarti went on for over two hours, during which all of us had our eyes glued to the Lord. In spite of our tiredness and lack of sleep, it was truly a wonderful experience, and nothing could make us take our eyes away. Even my son, who is normally a fidgeting child who can’t sit still for a moment, stayed in his place throughout the proceedings! He later told me that during the decoration, the idol first looked like a small . Then he looked older, and then like a king. When it was done, he looked like Vishnu! Well, that was not just my son’s imagination. The idol did seem to change its look with each layer of clothing added!
Thanks to our busy schedule, I couldn’t fulfill my wish of roaming around the streets of Pandharpur. On my earlier visit, I had noticed a street full of old book shops, filled with all kinds of ancient and recent books, mostly in Marathi. As usual, due to lack of time, I hadn’t been able to visit them, and on this trip, we found that the shops were gone! On asking, we learnt that the area around the temple had been cleared and the shops had been relocated to another street. We didn’t have time to go looking for them, especially since I anyway had no intention of buying any ancient Marathi manuscripts! Another thing I missed due to the clearing of the roads were the wooden toys we saw on our last visit. I was thankful that we had bought plenty of them then, for there were none visible now! Apparently, the toy sellers were nomads and weren’t around at this time! Thanks to the disappearing shops, this was one visit where I didn’t spend a penny shopping! And this was when I had expected to return with armfuls of wooden toys and glass bangles!!!!
Information
The of at Pandharpur is one of the most important temples in . It is believed that Lord Vishnu arrived at Pandharpur to visit his devotee Pundalika, who was busy serving his parents at the time. Without deviating from his duty, Pundalika threw a brick and asked the Lord to wait. The Lord obeyed his devotee and stood on the brick, with his hands on his waist, awaiting his devotee, and this is how he stands in the temple till this day.
Pandharpur is located in Solapur district, and is about 70 Kms from Solapur city. It is about 380 Kms from Mumbai and 200 Kms from Pune. Pandharpur now has a railway station and has regular trains from Mumbai.
There is no dearth of accommodation, and you can find a hotel to fit your budget. From Dharamshalas to three star hotels, there are plenty of options. We stayed at the Aishwarya Hotel, which was just 10 minutes walking distance from the temple, and was extremely comfortable.
There are also plenty of other temples and places to visit in and around Pandharpur. The most important of these are…
For those of you who would like to read more about the temple and its history, as well as the many other temples in the vicinity, here  are a few links for you…