July 27, 2010
We were returning from school and stopped by our compound wall to look at snails (as usual), trying to see if all of them were still around, when we spotted what we first took to be a rope, and only later realised was a snake! Both of us looked on, fascinated by the slithering creature which wove its way in and out of the holes in the wall, looking for God alone knows what! I realised that I had left my camera at home, and rushed up to bring it, wondering if it would still be around when I returned! It seemed to be a patient creature, for it was still around, and I did manage to get a couple of snaps, though not too good ones..... but at least now I have evidence that I have actually seen a snake in my yard!!!
It seems to be pure luck that I managed to get the entire snake in the frame for the very first pic.... Can you see its head and its tail?? and how it has managed to get in and out of the holes?? 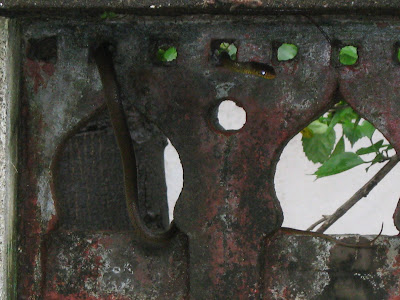 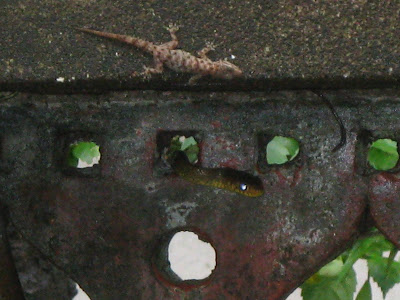 But these were all the pics I could manage before it seemed to realize that it was being watched, and slithered into the undergrowth!  We barely had time to notice the greenish yellow underside before it disappeared, forget taking a pic! Neither of us had the guts to go looking for it again!!!