December 27, 2010
Gudimallam is a small village about 31 Km from Tirupati. A few years back, I had read about an interesting temple there, and was determined to visit it this time. Getting an auto to the temple turned out to be the most difficult thing, for none of the auto chaps we met had heard about it! I was beginning to doubt the information I had gathered, when at last we met an auto driver who not only knew about the temple and agreed to take us there, but also regaled us with stories about Tirupati and surrounding places as he drove us from one place to another. 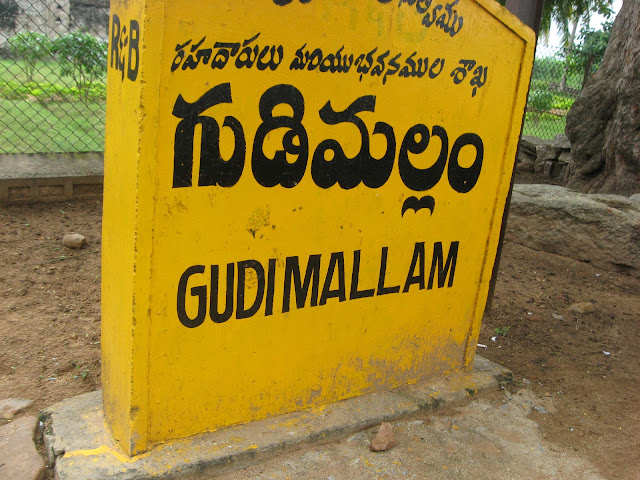 The narrow concrete road twisted and turned as it made its way along hamlets and then rice fields, now and then giving us a view of the dry river bed of the Swarnamukhi, as we headed towards Gudimallam. The river was dry, but the fields were fertile, and there were plenty of birds around. We saw swifts by the dozen as well as small green bee eaters, a few cattle egrets and some pond herons…as well as other birds I couldn’t identify. They flew away as the auto stopped, and the auto driver soon got tired of me trying to photograph them, so I gave up and thought instead of the temple I was going to visit. 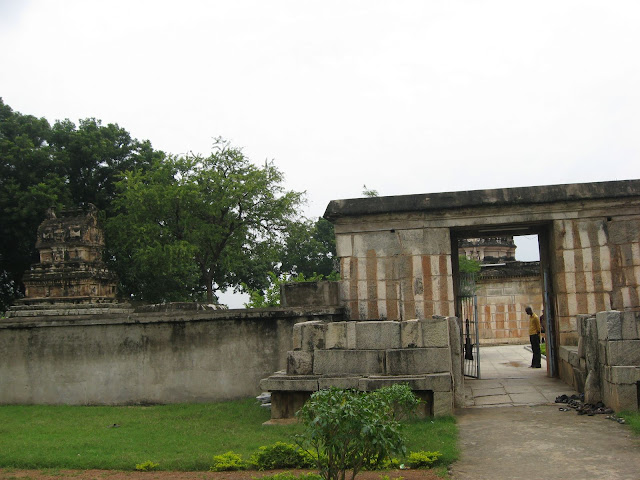 A curve of the road and suddenly the temple was there in front of us – an unostentatious village temple situated amidst the rice fields on the banks of the now-dry river. The main gate was closed, since the temple hardly drew crowds except at festival time, but there was a small gate open, and by it were monkeys prancing about. A group of old men sat by the wayside, and pounced on our auto driver for his news paper, which they all pored over with enthusiasm. Our driver asked us to wait, for the temple was sure to be deserted, and he wanted to accompany us to make sure we were safe. And then we heard the sound of another vehicle, a Qualis this time, filled with Gujarati tourists from Mumbai, accompanied by a guide. We all trooped into the temple together, for once, glad for the company! 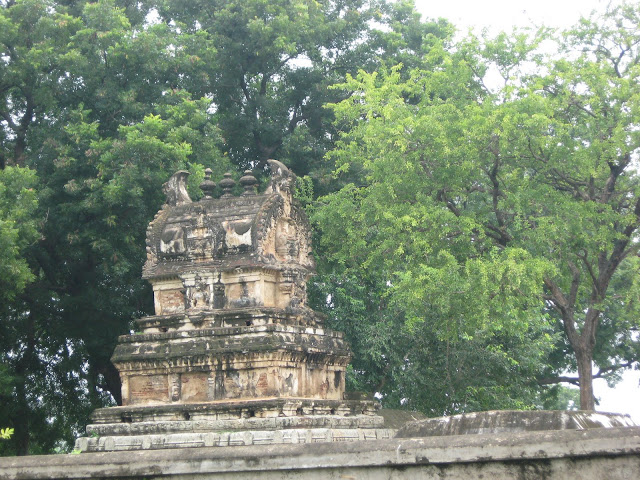 The first shrine we came to was a sub-shrine to Lord Karthikeya. The five feet tall image of the Lord was beautiful, and reminded me of some of the idols I had seen in the temples of Tanjore and around. There was no priest to deter me from clicking away, but somehow the Lord seemed too private to be photographed, and I didn’t feel like taking a snap. I settled with a photo of the Gopuram and moved on, towards the main sanctum, passing by the sanctums of Parvati and Surya along the way. At last, we entered the main temple, and at once, I was conscious of a great force, something which even seemed to strike the Gujarati crowd dumb! None of us uttered a word, and the silence was so charged with feeling, which I cannot describe as anything but divine!
The main sanctum lay in front of us, and there, in a depression, was the Lingam we had come so far to see. Before I describe the lingam and its importance, take a look at this photo of the Lingam. Photography is not allowed inside the temple, so I was unable to take a pic, and this one was taken from a board at Chandragiri. Incidentally, the Chandragiri Museum has a replica of this lingam, but photography is not allowed there either! 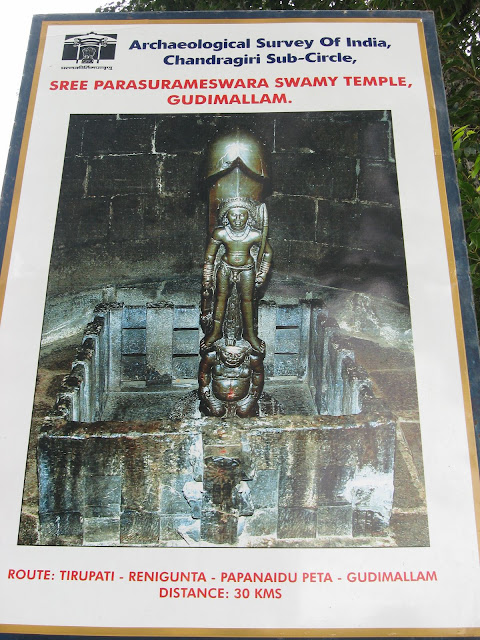 Here is another pic from the internet....

This lingam, which is unlike any other, is one of the oldest lingams, dating back to the first or second century BC! Shaped like a phallus, it is amazingly lifelike, and it also has an image carved on it. The carved image shows a dwarf sitting on his hunches, with a hunter perched on his shoulders. This is a unique image, seen nowhere else! The lingam is monolithic, but the texture of the stone varies too, and is clearly seen when the lingam is unadorned, as it was when we visited. The lingam has a peetham (base), part of which is still buried under the ground. The whole temple is maintained by the ASI, according to which this is probably the oldest continuously worshipped temple in the world!
The Lord here is known as Parasurameshwara, and this lingam is believed to depict the trinity. The legend of the temple connects it to Parasurama, an avatar (incarnation) of Lord Vishnu. To give a brief description of Parasurama, he was a warrior sage, who cleansed the world of its tyrannical kings. When he was a young man, his mother invited the wrath of his father, who ordered his sons to kill their mother. Parasurama’s older brothers refused to obey their father’s order, fuelling his anger further. Parasurama bowed down to his father’s command and cut off his mother’s head! The sage was pleased and gave him a boon, as part of which Parasurama asked for his mother to come back to life, which the sage had to agree to. Though his mother had got back her life, Parasurama felt guilty, since he had sinned by raising his axe (parasu) against his mother. He came to the banks of the Swarnamukhi where he meditated on Lord Shiva to expiate his sins. Each day, a lone flower would bloom in the river, which the sage would offer to the lord. Once, Lord Brahma decided to test him, and arrived in the form of a dwarf, offering his help, to which Parasurama agreed. The dwarf aided him with his prayers, but tried to find a way to test the sage. At last he hit upon an idea and plucked and threw off the single flower in the river before the sage could use it for his prayers. For the first few days, the sage thought that the flower had simply failed to bloom, but then he suspected his aide, lay in wait for him, and caught him in the act of plucking the flower. His anger aroused, he chased the dwarf, brandishing the axe. Brahma, realising that the joke had gone too far, called out to Shiva, who appeared and pacified Parasurama. He told him that his penance had borne fruit the minute Brahma had plucked the first flower from the river, and that he need not carry his guilt any longer. Further, he blessed them by merging them with the lingam, Brahma crouching down as the dwarf and Vishnu as Parasurama on his shoulders, holding his axe and a ram’s head. Such is the story of this unique temple!
The temple has a lot more interesting things related to it, so I would suggest you go to the following link which gives a much more detailed description.

http://www.megalithic.co.uk/article.php?sid=2146413274
As we came out of temple, we saw that the monkeys were busy eating something. Our driver gave them a look and rushed to the auto and peeped in, only to realize that the box of sweets he had kept carefully tucked inside, was gone! It was the day after Diwali, and the monkeys had a wonderful feast! We ended our visit with our driver cursing the monkeys and the old men laughing at the cleverness of the animals! It was only after we drove away that our driver realized that the old men hadn’t returned his newspaper! What a day for the poor chap!
It has been more than a month since I visited this temple, but yet, even now, as I write these words, the lingam stands before me in all its glory. This is one temple visit which I can never forget!
Information:
Gudimallam is located on a diversion from the Tiruchanur Road, at a distance of about 31 Km from Tirupati and 18 Km from Renigunta. Buses are available from Tirupati Bus Stand, but there are only a few buses travelling on this route. An auto for the round trip costs Rs. 250.
Other links to the temple:
http://en.wikipedia.org/wiki/Gudimallam
http://indiatemple.blogspot.com/2004/12/gudimallam-linga-satavahana-style.html
http://www.krishnababug.com/2009/03/gudimallam-papanaidupeta-kaala-hasti.html
http://www.hindubooks.org/templesofindia/siva_to_be_adored/andhra_pradesh/gudimallam/page1.htm
An interesting link about this lingam and Lingams in general: http://gunn.co.nz/anand/hinduism/lingum.html