An Interesting Book on Tirupati - An excerpt and a Surprising Revelation!

December 03, 2010
In my last post, I wrote about the museum and a rational explanation for the story of Varaha Swamy. My fascination with the legends and explanations for them continued when I visited the TTD Publication stall outside the temple. I can never resist books and always buy some no matter where I go, and here too, my feet unerringly led me to the one place where I was sure to enjoy myself – the book stall! We first picked up a couple of small books – one on the Ramayana for Samhith, and another on Annamacharya (a small pocket book being sold at the rate of Rs. 3/-!) and then my eyes fell on a tome which seemed to have all kinds of information about the hill. The size was enough to deter me, as such tomes are usually quite expensive, but as it turned out, it cost just Rs.100/- and I eagerly flipped through the pages wondering if I had enough space for it at home! It was full of photos from the temple, and lots of information on the geography, the geological formations of the area, as well the history of the temple. There were lots of references to the ancient texts, and lots of photographs from the temple itself. I finally succumbed to temptation and bought the book, sitting up late the next night to go through it in detail. 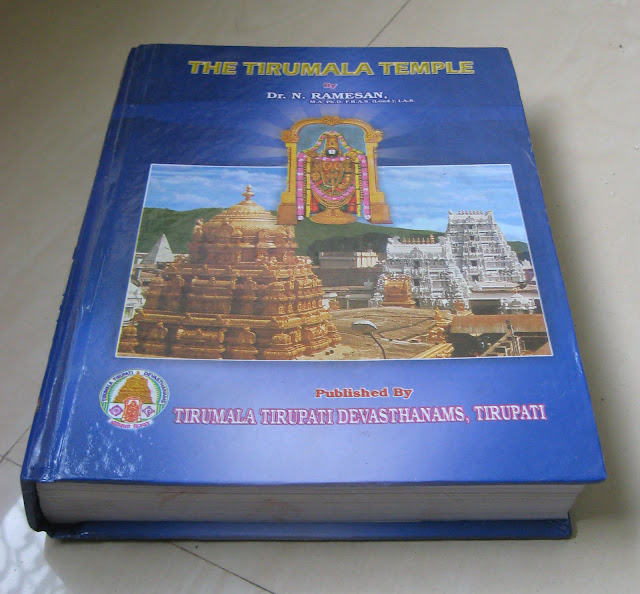 The book in question is entitled ‘The Tirumala Temple’, written by Dr.N.Ramesan. From what I read later on the net, it seems to be the predominant publication used as a reference connected to the temple. Not really surprising, considering that the author, Dr.N.Ramesan is an expert on the subject. Apart from a M.A and Ph.D., he was an F.R.A.S(London), and an IAS officer, who, in 1979, was  second secretary to the government of Andhra Pradesh (Revenue), and the Chairman of the Tirumala Tirupati Devasthanams.
Buying the book was probably the best thing I did in the ten days of my holiday! I still haven’t read the book from cover to cover – that will take more time and concentration than I have on hand right now – but what really made the purchase worthwhile was the absolutely rational way the author approached the temple and its antecedents. He says in the preface,

“I have always believed that history is nothing but the evolution of a drama that is played out by society, and that the ideas and thoughts that permeate a society, in any particular period, supply the motivating forces for their action. Hence, in my view, we have to look for a history of thought to trace correctly a history of events, and deduce from a critical review of history of events, the evolution of a history of thought. In our country, such a preoccupation, would inevitably lead to a study of the impact on society, of religion, which has contributed towards major shifts in the history of human thought, and thereby helped to shape world history.”

This explains in a nutshell, in more learned language than I can ever write, my fascination for temples, for it is in stories and legends that I look for a grain of truth – which fits into the history of the place – and explains the legend and its origin itself!
I have always been interested in stories connected to mythology. My mom and uncle are fantastic storytellers, and I grew up on a great dose of mythology and fiction! For a long time, I wouldn’t eat unless I was told a story, and even now, I am happiest while I have a book in my hand as I eat! As I grew up and read different versions of the same story, somehow I found myself not ignoring the story altogether, but looking for more and more versions of the same story! It has remained a fascination till this day, and I always look out for stories wherever I go, and try to listen to as many versions, for I believe that somewhere in them is a bit of history, exaggerated or simply blown up out of proportion to become part of legend and mythology.
The story of Lord Venkateswara has always interested me, since he is believed to embody the realities of the Kali Yuga – hardships, debts, re-payment of loans, and of course, EMIs! The idea that we pray to a Lord who pays back a loan to the banker of the Gods is an idea which has always amused me, and I have wondered if it was a subtle way of warning people about loans and credit cards by our far seeing ancestors. (If true, the legend has not worked, for there are more and more people taking loans and using credit cards, and few seem to be aware of the pitfalls!)
No wonder then, that when I picked up the book, I first turned to the section on legends. This happens to be the smallest chapter in the book – about 25 pages – but describes the sthalapuranam (the story of the temple as mentioned in the ancient scriptures) from various sources. There are some which describe the mountain as being brought all the way from Vaikuntam, and there are stories for each of the seven hills. There are stories of Lord Vishnu as a young man wandering in the jungle, being adopted by a woman, and marrying the princess. There are also references to the sages who arrived here and prayed to the Lord. There are stories of the kings who were helped by the Lord, and of those who built the temple. There are even all the stories of the saints who sang songs in praise of the Lord. But there was not a single reference to the loan taken by the Lord from Kubera, and this really intrigued me, since it is the story I have heard from the cradle! It is, after all, the raison d’être for the temple, but there was not a single word about it!
I started reading again from the beginning, searching for one word, one reference, but there was none. At last, I came to the historical part, which is really, really detailed, comprising of chapters for every era in Indian history! As a student, I avoided history in school, and just about managed to pass in the subject. I was thrilled when I chose the science stream and was rid of history forever, but of late, I have found myself reading more of history than science! Sort of poetic justice, wouldn’t you say?
Well, coming to the Tirumala temple in the Post Vijayanagara period, I found what I was looking for, but with a colossal surprise in store! This chapter describes the vandalism of temples by the cavalry of Sutan Abdulla Qutub Shah of Golconda, and the fear of vandalism of Tirupati itself. The author writes –

“…It appears to have had the effect of setting the stanikas of the temple, thinking out ways and means of preserving the great shrine from the cupidity of these iconoclasts. It is to this period that we must attribute the invention of the story of the God having borrowed money from Kubera for his marriage with Padmavati and undertaking to pay interest to him, through the kings who hold sway over this part of the country and the levy of fees on devotees for the several darshanams, of the institution of a pilgrim tax, and charge of fess, in coin, of value equal to the presents offered to the God. This appears to have then resulted in an average annual income of two lakhs of rupees to the shrine. The worshippers, who were anxious to preserve the institution free from alien interference, gladly and liberally contributed towards the funds of the temple. The Sultans of Golconda and their successors, the Nabobs of the Carnatic, farmed out this revenue to Hindu renters, thus realising annually, a steady and certain income from it. They could not afford to forego such a fruitful source of revenue by interfering with the worship at the shrine. Thus was the temple saved by playing on the cupidity of the conquerors and the foundation for the great temple laid.

The temple authorities seem to have put up a convincing story of the debt to Kubera, by actually preparing a bond relating to the transaction, which, the archakas say, is preserved even to this day. Whatever be the truth, the temple archakas of that period are entitled to the eternal gratitude of posterity, for this daring piece of diplomacy, which, while conciliating the cupidity of alien rulers, made it in their own interest to preserve the shrine from harm.”

Very interesting, wouldn’t you agree? The fact that the story is a fabrication does not come as a real surprise. Indian mythology is full of such fabrications, usually a tiny event totally blown out of proportion, but the cause for such a fabrication was a surprise to me. Imagine the sheer gall of the temple authorities to make up such a story and follow it up over generations, all for the cause of making the temple independent. Even more surprising (and gratifying too) is the fact that this book has been published by the TTD - the Tirumala Tirupati Devasthanam Trust!
The first thing that struck me was that here was one temple, which came close to being flattened, but was saved by the smart thinking of a select few. However, it also shows us from where and how the present greediness of the temple authorities comes from. Of course, the TTD perform a lot of good too – they have made excellent arrangements for the pilgrims, and have built schools, colleges and hospitals. Tirupati is no longer a small town thanks to them, but just think of the amount they collect every year from the pilgrims. If, in the age of the Sultans of Golconda, they amassed a fortune of two lakhs a year, can you even begin to think of the amount they collect now? We keep hearing of the crores collected in the Hundi in a single day, but that is just part of the income. There are the huge charges collected for the different sevas, the permanent income from the regular donations by people, the collections from the rooms, the list goes on…. One source from the net pegs the figure at over Rs.1000 crores per annum! And that is just a broad guess!
I have just realized that this post has taken over 3 hours to write, and I am not even in the mood of editing it and making it shorter, so I am posting it as it is... it is meant to be a collection of my thoughts, after all….. That’s enough of my thoughts for now. I am waiting to hear your thoughts on the subject, so please do leave your comments below. I hope to get along with my travelogues with the next post!