The Best Gift - Books for all ages

August 09, 2011
When I won the World Environment Day Contest held by Pratham Books, I was thrilled! Any prize is exciting, but nothing beats a book received as a prize! And I would be getting a copy of their latest offering - "A King Cobra's summer"! From the moment I told Samhith I had won a prize, and that he would be getting a book, he started asking me when the book would arrive!

And then, last week, the postman held out a parcel which looked a bit too bulky to hold just one book, but it did appear to be from Pratham Books, so  I wondered what it could be! And what a surprise it was, to receive not one, but FOUR books from them!!!! 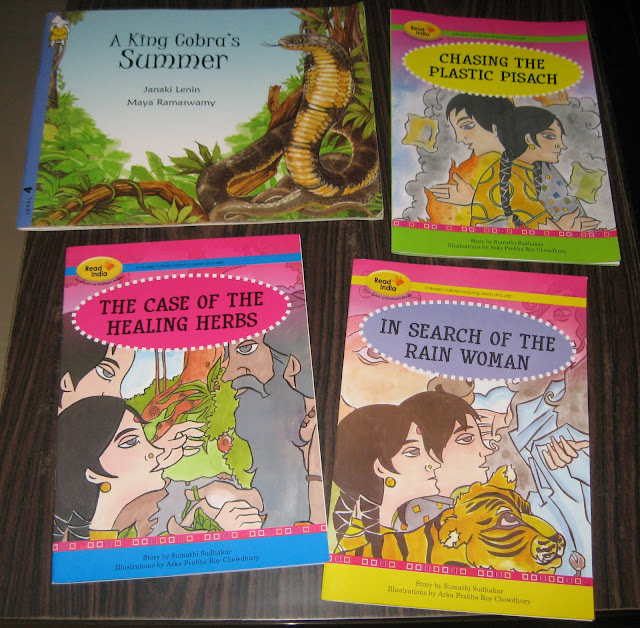 The King Cobra's summer, like the name suggests, is about a King Cobra which finds its way into a city, and then has to find its way back to the jungle it came from. Along the way, it remembers its journey from birth, and gives us a great insight into the struggles it goes through! A definite learning experience, one which arrived opportunely just after the Nagapanchami festival, and made us re-think about what we do to snakes in the name of prayer and rituals! The festival had just initiated a discussion on snakes, one which had started when we had spotted a snake in our compound and heard about a similar one being killed in the next colony. The book couldn't have come at a better time!!


Samhith's favourite from the four was Chasing the Plastic Pisach, a book which deals with the issue of plastics. A recurrent topic in his school, the avoidance as well as re-use and re-cycling of plastic are issues he is familiar with. His school has stopped handing out books in plastic bags, they give us cloth or paper bags instead, and the kids are also encouraged not to bring plastic bags to school! The idea of the 'plastic pisach' - the plastic demon - found great favour with him, and he was busy trying to imagine different faces for the demon!


On the other hand, my mother-in-law loved The Case of the Healing Herbs, which talks of herbal remedies she has been using for years! Almost every ailment in our home is first treated by one of her readily available home-made medicines, and they work nine out of ten times! It is only for the odd one which doesn't seem to listen that we need to visit the doctor! No wonder, Samhith has grown up with no fear of doctors and injections, and even better, no idea of what tablets and tonics taste like! She was thrilled to see these easy remedies in print, that too in a children's book!

Among the four, In Search of the Rain Woman was the only one which did not make its mark, maybe because it arrived with so many other books!!! Besides, the topic will be more relevant in the summer, when we experience the beginnings of a water crunch, not now when the rain is lashing outside the window, not allowing us to set foot outdoors! I have packed up the book to read during the summer vacation..It will hopefully strike a chord then!!

Meanwhile, thanks so much, Pratham Books, for sending us such a wonderful set of books, which appealed to everyone - from grandmother to grandson!