A Festival I hadn't heard of!

August 26, 2011
Considering how much I enjoy festivals, and coming from a family obsessed with celebrating not just our own, but every festival we come across, I had thought myself to be fairly well up to the mark when it came to knowledge of festivals celebrated in India.... at least those celebrated in the parts I come from and where I live! It just goes to show you how much I know when I came across a completely new festival today... in the market of all places!

I had taken my camera along, hoping to photograph some Ganeshas ready to be sold for the forthcoming Ganesh Chaturthi festival, and also all the stalls selling decorative items for the festival. As it happened, the rain was a dampener for the roadside stalls which are the most colourful. Only one of them had braved the rain, and he was making the most of the monopoly the weather had brought him. It was so crowded and he was so busy that I didn't even have the heart to think of taking photos amidst the melee!
As I moved on, buying other things I had come to buy, I stopped to look at an old woman selling images of Gauri. Gauri is another name for Parvati, who is the mother of Ganesha. In some parts of the country, mainly Maharashtra and Karnataka, Ganesh Chaturthi is preceeded by Gauri Puja the day before when the goddess is welcomed into the house. It is believed that Gauri comes home to earth to visit her parents. Shiva however is unhappy, and sends their son, Ganesha to eaarth the next day, to bring her back. Ganesha comes to his grandparents house, where he is pampered for anywhere between one and a half to eleven days, before he finally goes back home, taking his mother with him. In houses where this puja is celebrated, people bring home a clay idol of Gauri the day before bringing in Ganesha, and both idols are immersed on the same day. I have seen Gauri images being sold before, and in fact have bought them too, since my mom celebrates Gauri Puja at home. This time, I was in for a surprise! 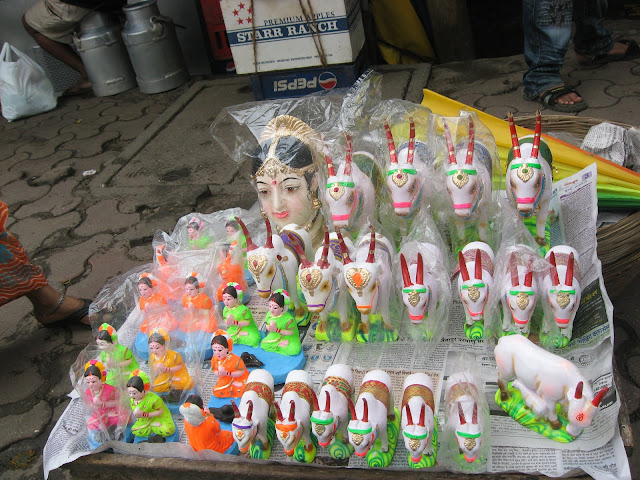 The old woman was selling not just clay images of Gauri, but also cows! I was surprised, since I had never seen them before. Wondering if they were to be used along with the Gauri image, I asked the woman what they were for. She replied in Marathi, "It is for Pola!" "Pola!" I wondered aloud. I had never heard the word before, and had absolutely no clue what she was talking about! Perhaps sensing that I was lost, she explained that Pola was a festival which would be celebrated on Sunday, when cows and bulls would be prayed to. Since there was no place in Mumbai to keep cattle, these clay images would be the ones used for the puja! 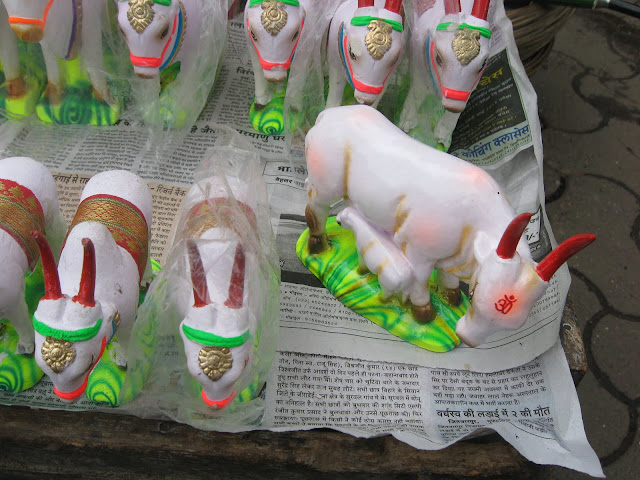 It sounded so similar to the 'Mattu Pongal' celebrated in Tamilnadu during the middle of January, that I was curious to learn more about the festival, and sure enough, Google gave me the answer I was looking for! Here is what Wikipedia says about Pola:

Pola is a bull-worshipping festival celebrated by farmers mainly in the Indian state of Maharashtra. On the day of Pola, the farmers decorate and worship their bulls. Pola falls on the day of the Pithori Amavasya (the new moon day) in the month of Shravana (usually in August).

Celebrations : On the day of Pola, the bulls are first given a bath, and then decorated with ornaments and shawls. Their horns are painted, and their necks are adorned with garlands of flowers. Then, they are worshipped by their owners.The processions of decorated bulls, accompanied by the music and dancing, are carried out in the evenings. The first bullock to go out is an old bullock with a wooden frame (called makhar) tied on its horns. This bullock is made to break a rope of mango leaves stretched between two posts, and is followed by all the other cattle in the village. The order of the cattle is often indicative of the social standing of their owners in the village.[2] In some villages, fairs are organized, where competitions take place.Pola is the main festival of the farmers of the Maharashtra, especially the Kunbis.

Puran Poli, karanji, and curry with five vegetables are the main dishes associated with the festival.

It does sound similar to Mattu Pongal, which is celebrated the day after Pongal, or Sankaranti as it is called here in Maharashtra.You can learn more about Mattu Pongal here. Then too, cows and bullocks are prayed to, but that is the only similarity. The festival is celebrated at a different time, and doesn't seem connected to the harvest festival, like it is down south. However, it just goes to show that people all over India celebrate the same events, just at different times and in different manners!