Our first sight of Amber Fort was from one of the turrets of Jaigarh. Standing so high up, looking down at the Aravalli ranges stretching to the horizon, my first thought was that it blended beautifully with the mountains. The name ‘Amber’ comes, not from the English word for the colour, but is a derivation of the word “Amba” or the goddess. However, it is pronounced as ‘Aamer’. The spelling varies too, with both usages – Amber and Amer – being quite commonly used.

Amber fort was built in the sixteenth century during the reign of Raja Man Singh I. Man Singh was a trusted general of the Mughal Emperor Akbar. He was considered one among the nine gems (Navaratnas) of Akbar’s court.

The main approach to the fort is through a series of steps from the front, leading to the Suraj Pol, which is so named because it faces the east, where the sun (suraj) rises. 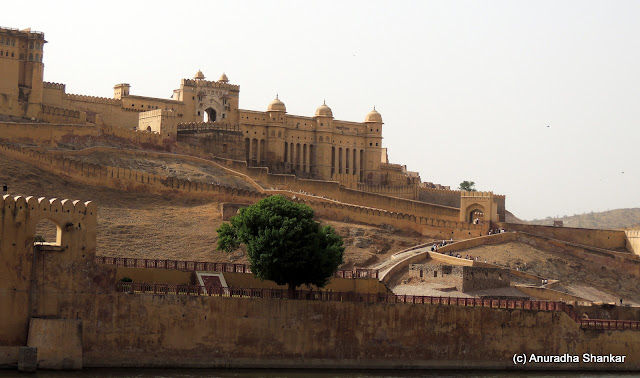 However, there is also a road leading halfway up the hill, from which a ramp takes us straight to the fort. This path leads us through the town of Amer, which seems to have survived the passage of the centuries. The narrow lanes pass by small and big houses, temple spires towering all the other buildings. Thanks to the long line of vehicles along this route, we were unable to stop for a better look. But for those of you who will be visiting Amer, give yourself some time to explore the town. From the looks of it, it must be interesting, with lots of stories to tell! 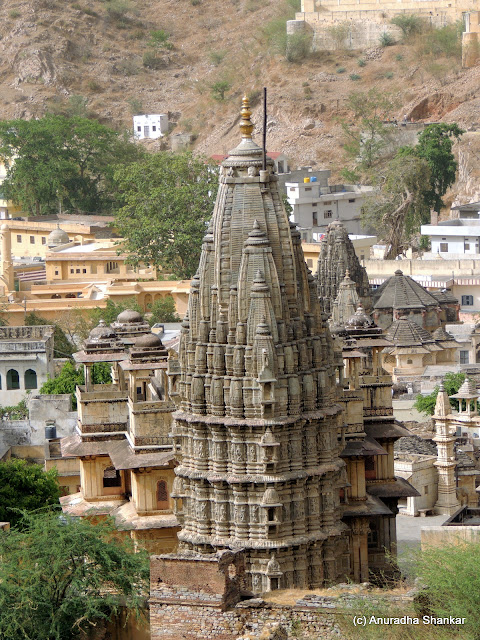 This path leads us to the Chand pol, named for the moon. This gate was meant for the commoners, and in a strange way, is still the gate which is always crowded with visitors! 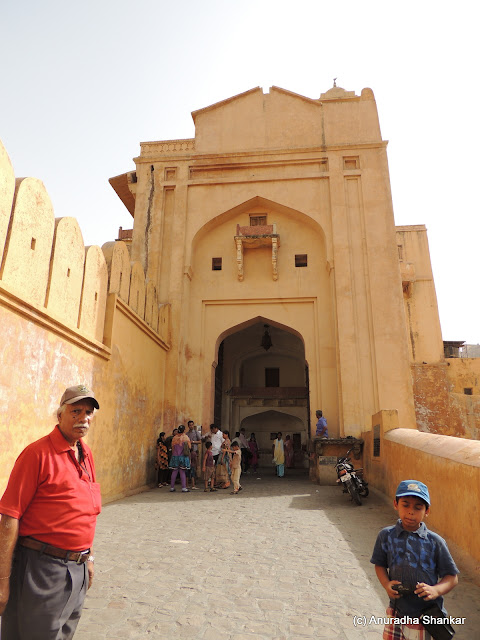 Above the Chand Pol is the Naubatkhana. This is a place where musical instruments were kept and played at important occasions. Among the instruments were shehnais and nakkaras, both of which were popular instruments associated with the period. The playing of such music was an important part of the ceremonies, and the audience was expected to keep perfectly quiet at such times. The word itself has Persian origins, and the usage of these musical instruments are said to have been prevalent since the times of Alexander the Great! 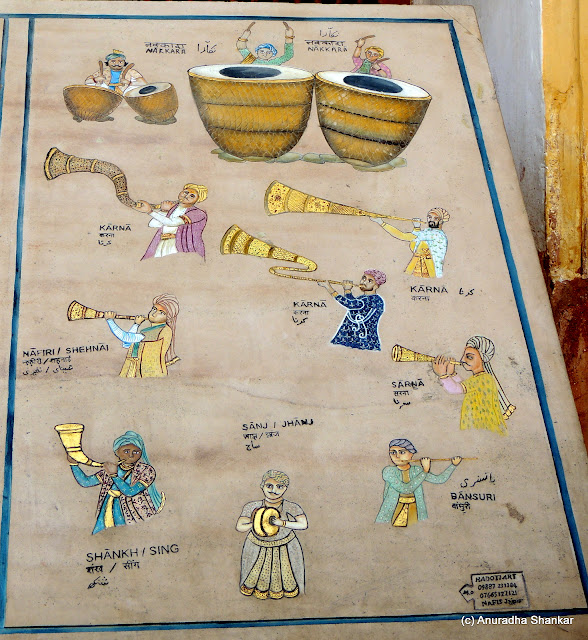 Entering the massive gate, we found ourselves in a huge courtyard. 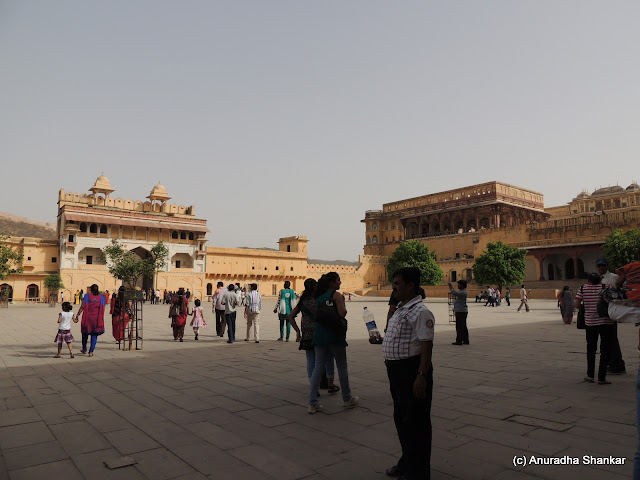 This is the Jaleb Chowk, another word which has its roots in Arabic, meaning a place for soldiers to assemble. This was the place where, at one time, the victory parade would be held when the army returned from a successful battle, bearing bounties from the vanquished kings. The king could come down to inspect his troops, but the queens witnessed the spectacle through the latticed windows all around the courtyard.

On one side of this courtyard is an impressive set of steps leading to the next part of the palace, and on the right is an unobtrusive paved path leading to the Shila Devi Temple. 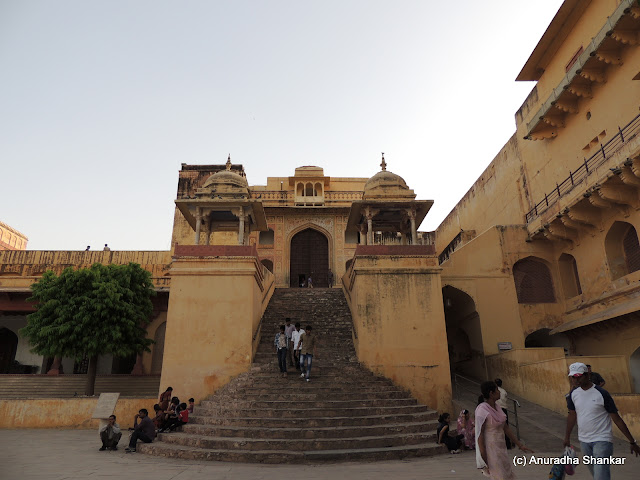 Interestingly, while the fort is the main attraction for tourists who flock here from far and wide, it is the temple which attracts crowds of locals. While tourists enter the temple for a brief glimpse of the deity,  the regulars glare at you for interrupting their heartfelt prayers. The family who accompanied us to the fort told us that they came to the temple often, but it was years since they had seen any other part of the fort. They said the Devi had great powers and that on some special days, the temple crowd far exceeded that of the tourists!

The story of the goddess’ arrival at Amer is an interesting one. as with many other legends, there are two versions here too!

The warrior goddess Amba, also known as Kali, is the patron deity of the Rajputs. In fact, as I have mentioned before, the name of the fort, Amer, comes from that of the goddess. As per the first version of the story, when Maharaja Man Singh marched on Bengal, he prayed to the goddess for victory. The goddess blessed him in a dream, and instructed him to worship her image, which he would find in the seabed. After the battle of Bengal in 1604, Man Singh retrieved the idol of the goddess from the seabed as per his dream, and installed it at Amer. The deity is called Shila Devi, since the idol is carved from a single stone, or shila.

The second version is from the same period – the battle of Bengal. According to this version, after the victory at Bengal, Man Singh received as a gift, a black stone. This was no ordinary black stone, but the one from the story of Lord Krishna. For those who don’t know the story, here it is in brief. Kamsa was an evil king, and when he heard that his sister’s 8th child would kill him, decided to kill all his sister’s children by dashing them against a black stone. In this manner, he killed 6 of her children. The seventh child miscarried, and the 8th was taken to safety in the dead of the night, and replaced with a girl child. When Kamsa dashed this girl against the black stone, she jumped from his grasp and took the form of the Devi, informing him that his killer had arrived. This 8th child, Krishna, eventually returned to kill Kamsa. The black stone gifted to Man Singh was believed to be this very stone, and he used it well, carving an image of the Devi on it, and installing her at his fort.

The silver covered doors of the temple are an impressive sight, and even more impressive is the Ganesha statue carved out of a single piece of coral. This is the biggest idol made of coral that I have ever seen!! Unfortunately, this is the only part of the fort where photography is not allowed. In fact, the guards even stopped me from clicking pics of the entranceway.

If you are wondering by now, yes, we are still in the very first part of the fort... just the entrance, so to speak. We still have to enter the fort and see its beauties, so I shall leave them for the next post!!