Part 1 and Part 2 of Amer Fort have been quite descriptive... probably much longer than needed, but I have had these photos for so long, I just had to use them!!!

From what I heard from a couple of people, the fort was in quite a bad shape till the last decade or so. Of course, not really in ruins as many other forts, but in a dilapidated condition nevertheless. Going over what I saw of the fort, it does look like a lot of work has been done, which is really commendable, considering the state of many such other heritage precincts in our country. It does make us think just how beautiful some of our other palaces, forts and temples would be, if we just took the pains to recreate the magic of those bygone days, and kept them well maintained. 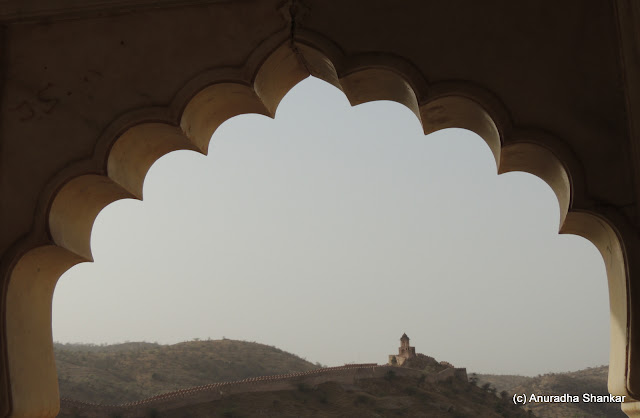 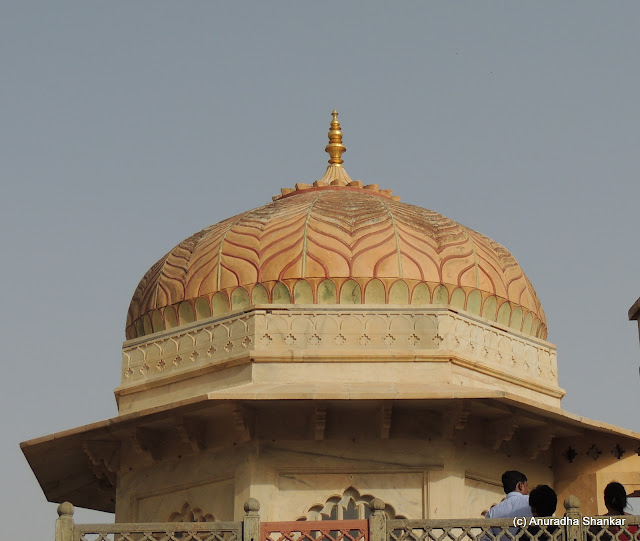 Continuing with the series, we now pass on to the oldest part of the fort – the palace of Raja Man Singh. Completed in 1599 AD, this structure is said to have taken 25 years to build, and must have then stood alone as the only palace in the fort complex. 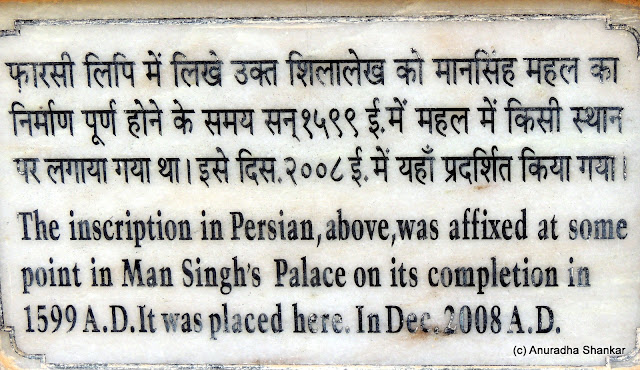 The structure is simple, as compared to the later parts of the fort that we have already seen, but it is no less beautiful, considering its age and the period it was built in. 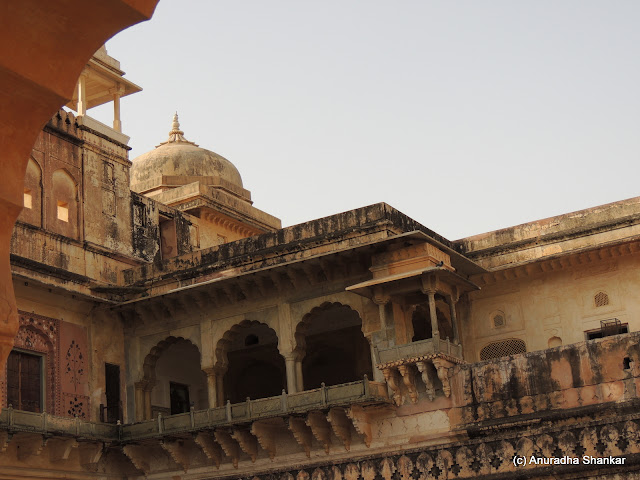 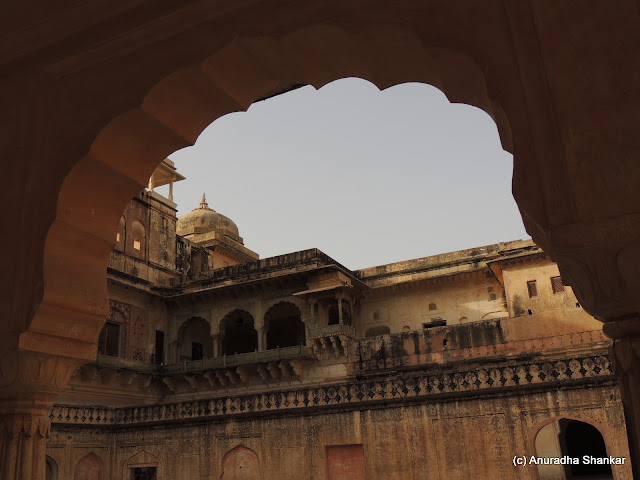 In the central courtyard of the palace is the pillared pavilion, or baradari, which was a meeting place for the queens. 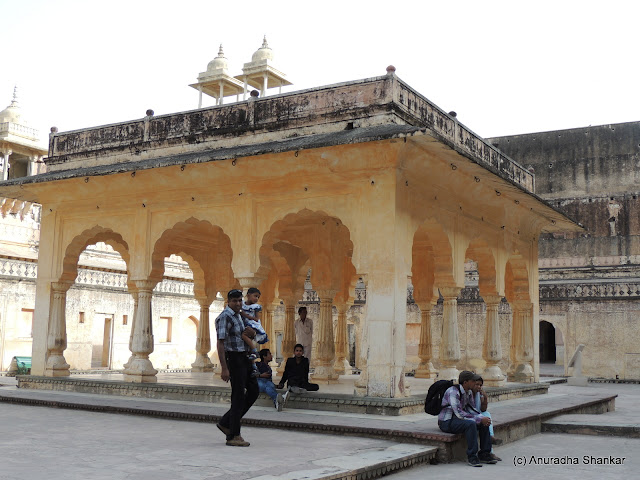 All around, and opening into the courtyard, are the queens’ palaces, decorated with frescoes and coloured tiles. 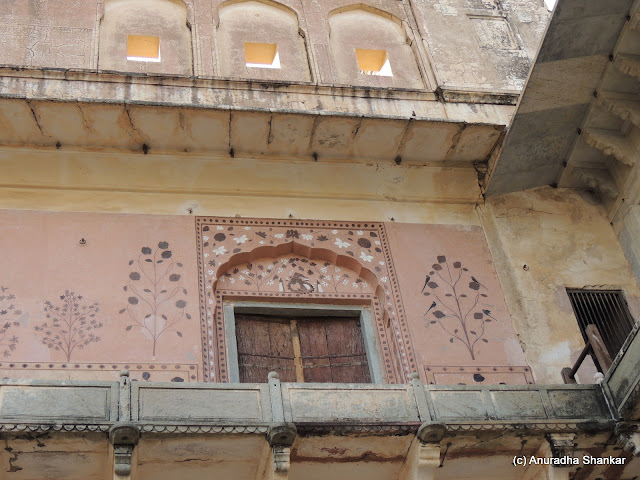 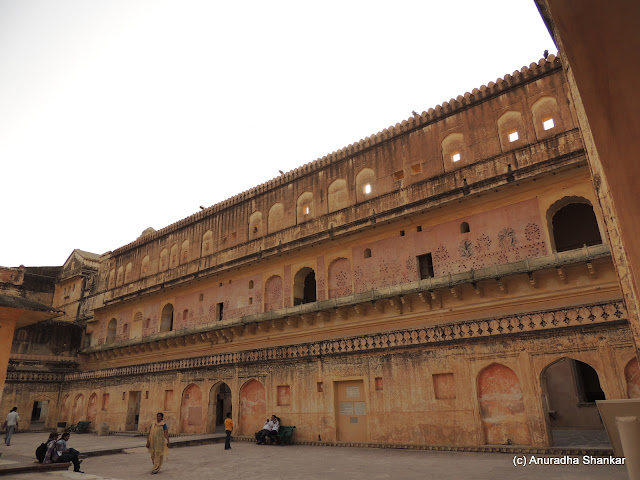 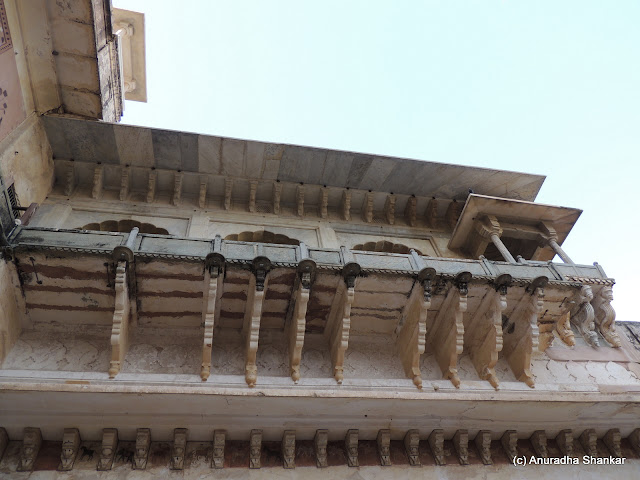 These are the main portions of the fort, but there were lots of other things about the fort which captured my attention.....

Such as these beautiful paintings... remnants of the original paintings which covered the walls in its heyday.... 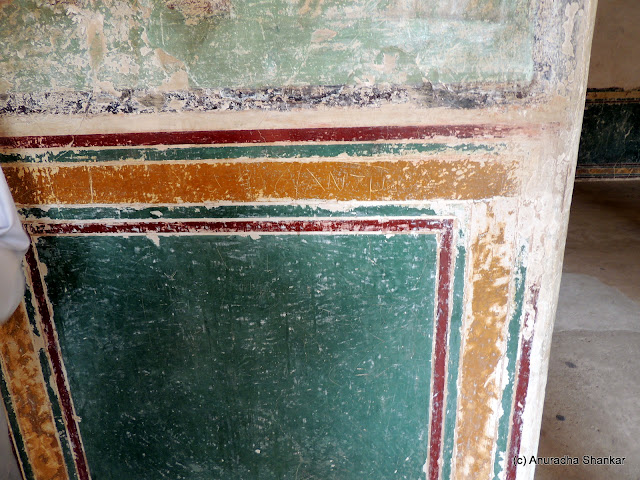 These are natural colours, said to have been made by crushing precious and semiprecious stones.... they have lasted the wear and tear of centuries, and more would have survived with a bit more care.. 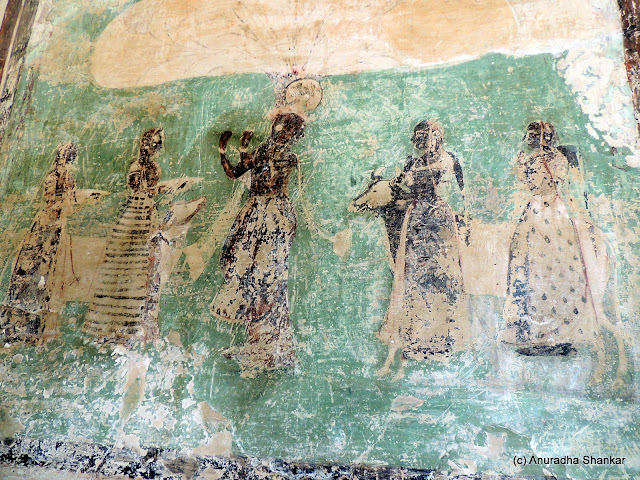 Even more interesting was how beautifully decorated were even the balconies all over... the lattice patterns are so detailed even in places they might be overlooked... and no pattern seems to have been repeated!

We especially loved this gallery above the Diwan-e-Aam. The views from here are wonderful.... of the surrounding hills, the lake at the foothills, the gardens surrounding the fort, and the Jaigarh fort too... 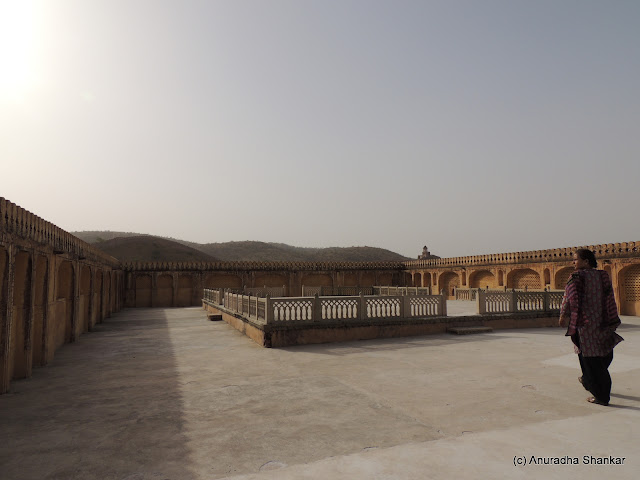 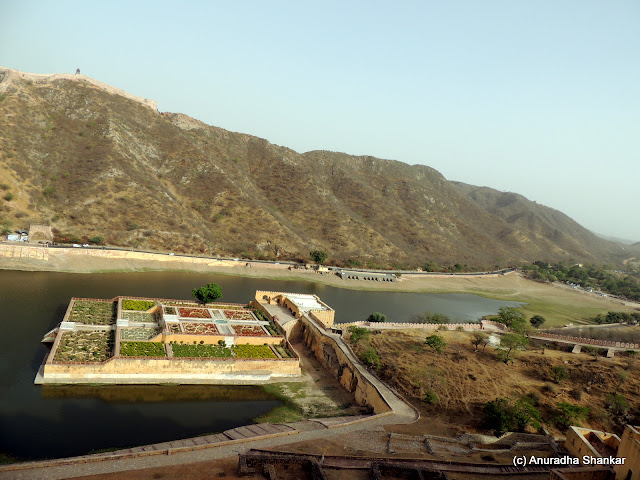 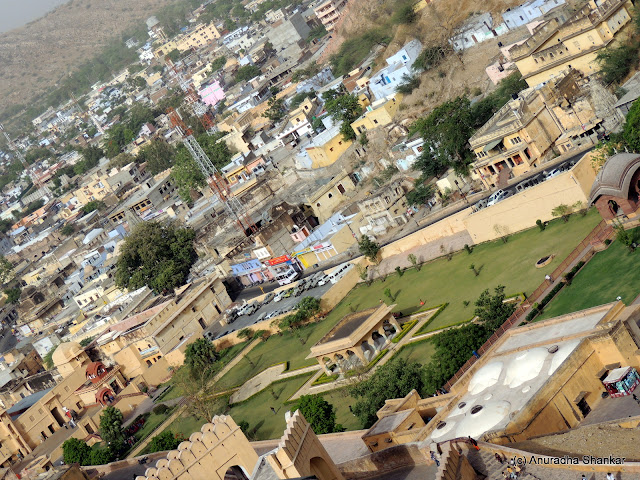 We were told that this was a place where the king enjoyed performances.... and sitting there, with the cool breeze making us forget that it was peak summer, it was easy to imagine ourselves in the 17th century, as you can see from this pic of Samhith and his aunt! 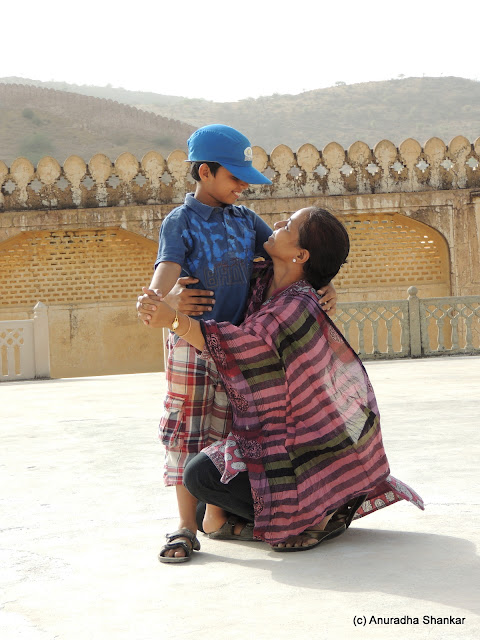 And then there were these ramps we saw all over the palace..... 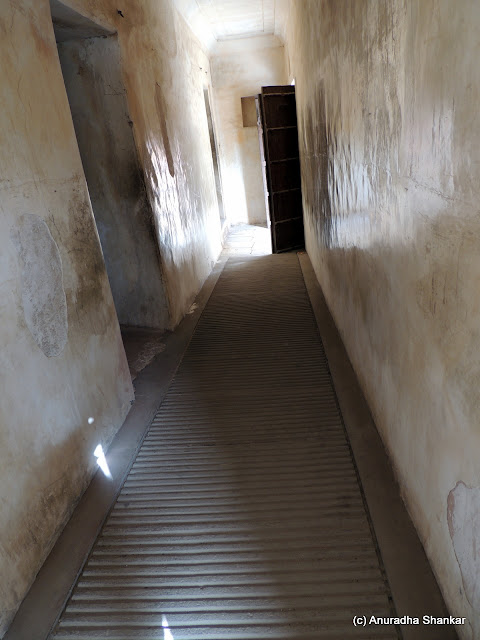 It was only towards the end that we were told what they were for. Apparently, the queens then dressed in these heavy lehengas, which almost made it impossible for them to walk all over the sprawling fort. The royal carpenters and mechanics therefore came up with the idea of building a chair for the queen which could be pushed all over the fort.... and hence these ramps with ruts, which helped steer the contraption. There is just one of these ‘vehicles’ on display in the fort, but unfortunately, I did not manage to get a decent photo.

Another interesting thing about the fort that I noticed was how beautifully the structure utilised every bit of water. There are two lakes, which provided water to the fort, and rainwater was used wisely, collected from the terraces and diverted to the tank from which water was used to cool the place in summers... even the water flowing down the hill was collected and channelled into drains, which eventually led back to the lakes. Our ancestors had such a wonderful grasp of basics and they managed to make the most of the available resources. Wish we would learn from them!

There are a few more things to see in the fort... such as the Tripoliya gate, which leads to three portions of the fort, and a secret tunnel (now blocked) which leads to Jaigarh. 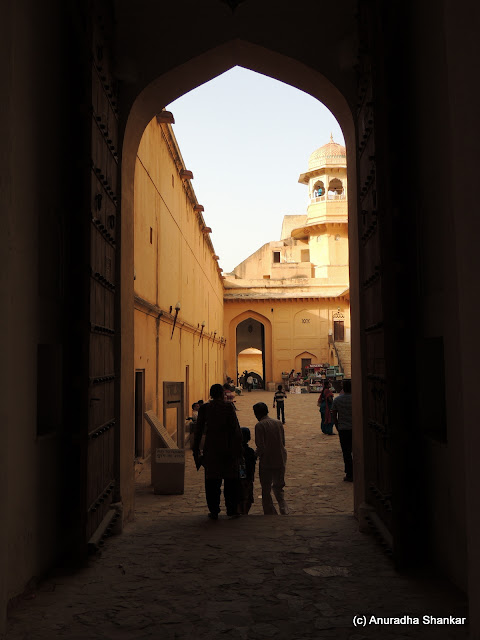 However, before I finish this series on Amer, there is just one more thing to show you.... the gardens at the foothills.... one is a simply laid out carpet of green, overlooking the town...

While the other is an intricately laid out geometric pattern of beds, which once were filled with kesar (saffron) plants – called the Kesar Kyari. 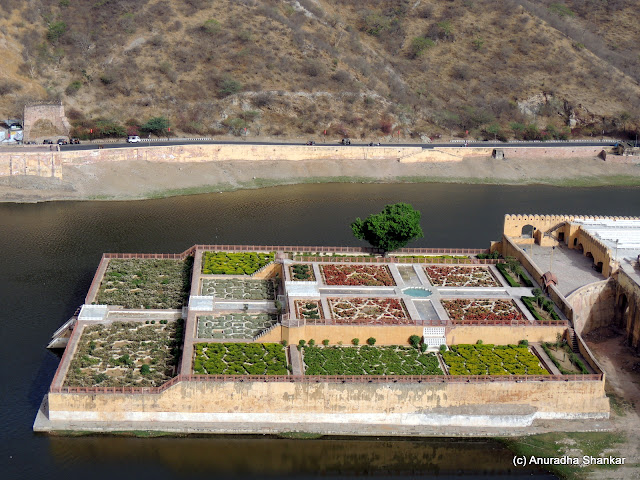 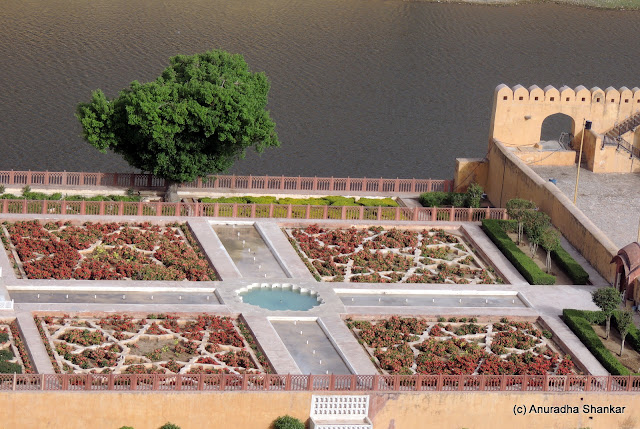 It is said that the king gave these two gardens to the two main architects of the fort to design.... and leave their mark. While one chose to make a simple garden which would bring peace to those who chose to relax there, the other chose to design a garden which would bring pleasure – through saffron – the most exotic among spices, in a manner which would never be forgotten. Peace and pleasure! What a way to leave their signatures behind... It is this which makes Amer so special – the palace was obviously designed for the King’s pleasure, but it is also designed to make life peaceful and serene for all those who lived here.

Today, the space outside the Kesar Kyari is used for a different purpose – to take visitors back to the era when the Rajputs ruled this area..... through the sound and light show.

I shall leave you with one last photograph... of the fort lit up in the colours of the flag of Jaipur....

Entering the Amer fort, the first question we were asked was if we wanted a quick tour or a leisurely one. On questioning the guides, we were told that we could have a quick tour of the fort in about 45 minutes, while a leisurely stroll through the place would take us at least 2 hours. It was already evening, and we had spent the whole day walking around temples and forts. We were also accompanied by friends who weren’t too keen on the tour, so we decided to do the quick one. As it turned out, even that took us almost an hour and a half, considering I stopped all the time to click photos!