Living in a city where the winter is nonexistent, and snow is something that can only be seen in movies, the prospect of seeing and playing in snow can be a real temptation. The new Snow World at Phoenix Market City at Kurla had been tempting us ever since it opened, especially since it is barely half an hour away from our house. However, actually going there was another matter, and it seemed we needed some extra impetus to drive us there. 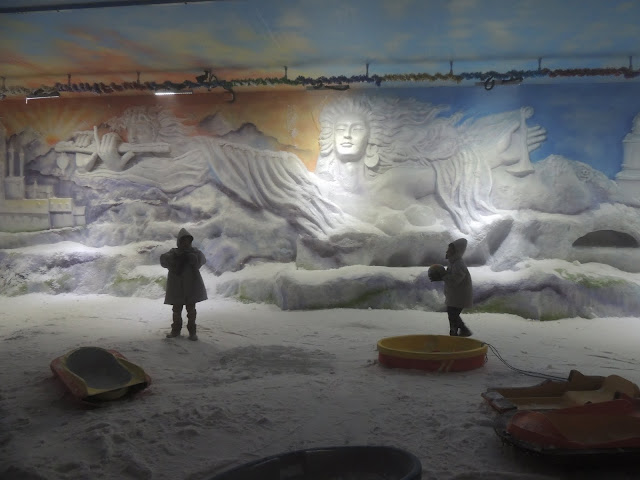 The impetus came last week in the form of an invitation from Kiran to join her and her son in a mom-kid get together, along with some other friends. Kiran and I first met at Lavasa, and it seemed a good opportunity to catch up, and introduce our kids to each other!

The kids bonded over Pasta, Pizza and French Fries, while we moms chattered away, and finally it was time to visit the Snow World. The entrance was unremarkable – in fact, we could have easily passed it as yet another store. Inside was another matter entirely. We first had to deposit all our bags and pull on the jackets, shoes and gloves provided. That itself took us more than half an hour, but finally we were done, and were allowed inside.

The temperature inside is maintained at -100C, and in spite of all the warm clothes, we did feel a bit of the chill.

The interiors are quite simple... just a big rectangular area with snow all over. Even as we looked around, the kids sensed the best section – the snow slide... and headed off. 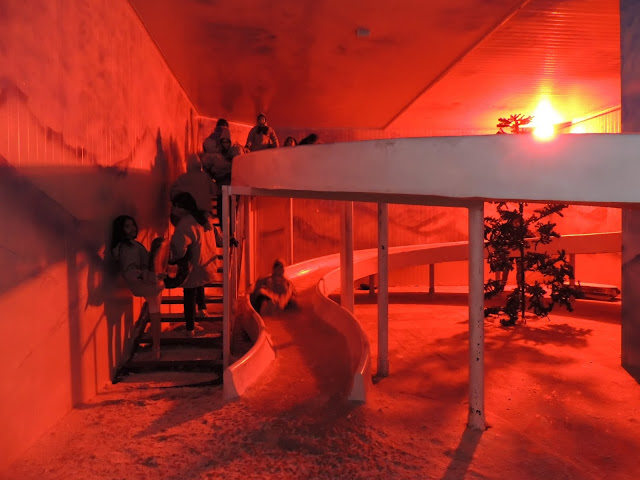 Sliding on the snow covered slide, sitting on tires, seemed to be quite exciting, especially for the smaller children. Samhith refused to come out, and did so only when his friends called him to throw snowballs at each other. 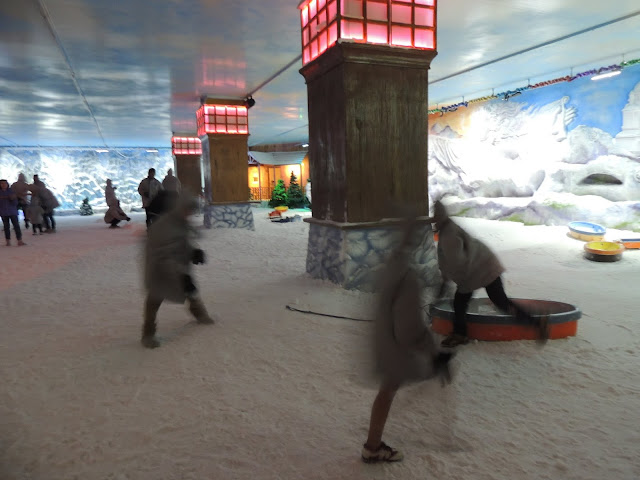 On one side is an enclosure where people can play with balls... 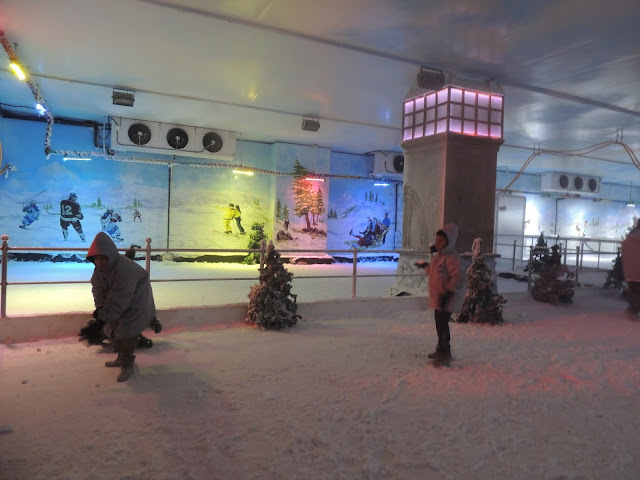 There are a few sleds, which none were in the mood for... 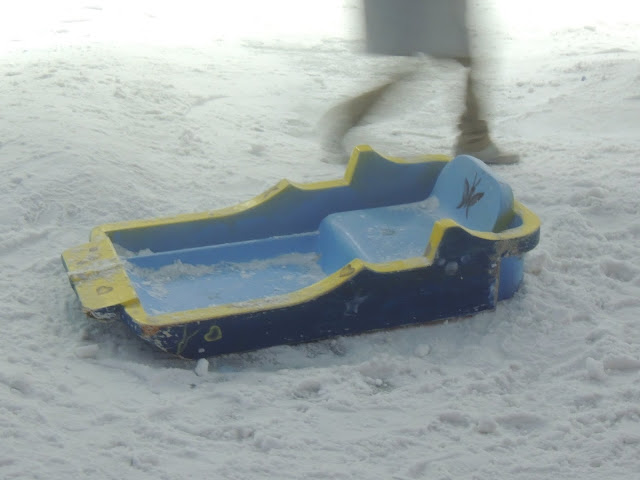 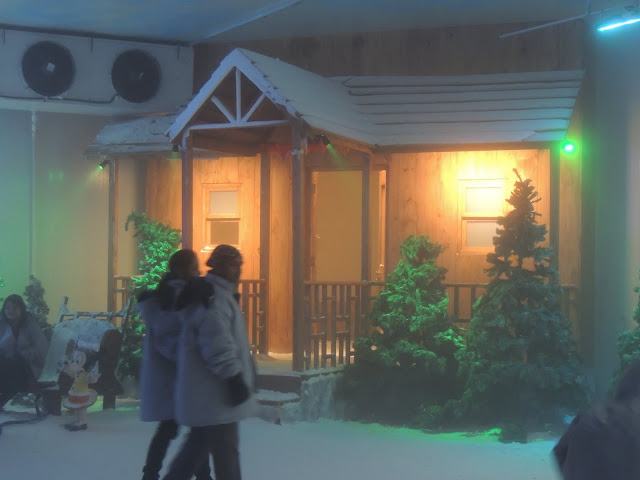 And there is also an area reserved for ice skating. 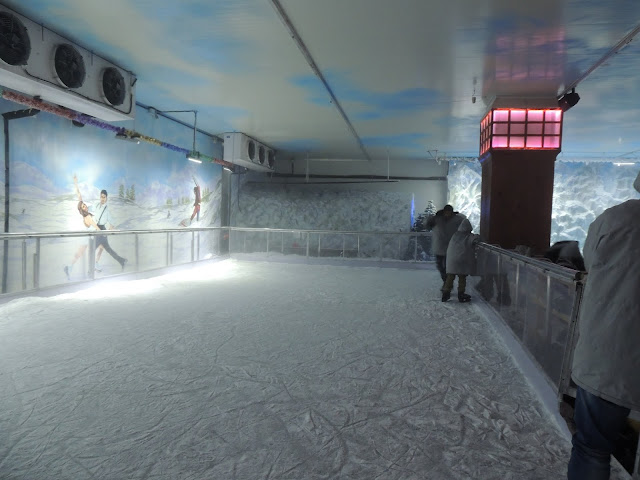 Skating shoes were available (though not one in Samhith’s size... he had to wear one which was at least two sizes bigger), though there were few who could actually skate. The kids walked gingerly, holding the railing, and I wondered if they were enjoying themselves, or if they were afraid! 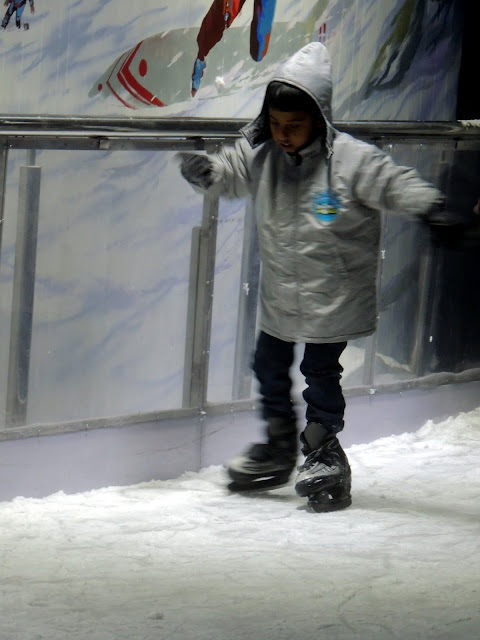 By the time we had seen and done all this, the temperature seemed to have fallen further. The blowers were on, so it appeared as if snow was falling. While I had to handle my camera, which was getting to be quite difficult with my glasses fogging over, the kids seemed to be enjoying all the snow even as they were shivering with the cold. I eventually had to put my foot down and insist that our time was up, and that we had to leave! It was only when we came out that we realised that in spite of all our warm clothes and shoes, our socks were drenched, and so was our hair where the hood had slipped! We were shivering, and it took cups of hot chocolate to get everyone back to normal.

Even as we got the jackets off and returned our stuff, Samhith had just one question – “When are we coming back?”

How to get there:  The nearest Railway stations are Kurla or Viyavihar on the Central/Harbour lines, and Santacruz on the Western line. If you are driving, be warned.. the traffic at any given time on this road is a nightmare! It is far better to take a train and then an auto to get here.

Cost: The tickets to the Snow World cost Rs. 400, inclusive of jackets, shoes, and gloves. Socks are available at an extra price. Camera / Mobile Phones are charged Rs. 50 extra. It is best, however, to leave everything, including handbags, purses, mobiles and cameras in the lockers provided.