June 18, 2013
Our Wayanad trip was entirely planned by Thomas Cook India. So, when we left, we had no idea where we would be staying. This was a big first for us, since I am the one who usually makes all the arrangements, and thus know exactly what to expect. I stubbornly refused to ask details about the accommodation, trusting that someone as experienced as Thomas Cook would surely find us the perfect place, preferring to take this trip as it came. 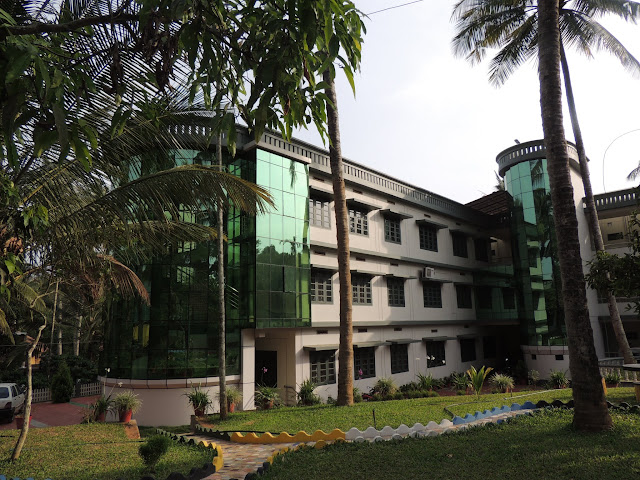 Driving down from Bangalore, Samhith and I wondered what the hotel / apartment would be like. We debated over whether it would be in the city or far off, in the wilderness or a plantation, if it would be like a homestay... you get the drift. It was only as we approached Kalpetta that we realised that the hotel would be near the town, and Samhith’s face drooped a little. But then, as our car followed our escort over winding roads, amidst tall trees and thick plantations, his face lit up once more, and he eagerly began looking around, wondering which of the houses/ hotels would turn out to be ours! It was no wonder then, that this tall green building, towering over the surrounding plantations, came as a complete surprise!

Misty Hills isn’t like a hotel, but is more of an apartment complex. It stands at one end of a property, part of which is still the home of the owner. All around are other private properties, each home more beautiful than the other. Each house has a plantation, or at least a garden, as does Misty Hills, adding to the homely atmosphere. Colourful flowers line the building, offsetting the modern structure, helping it blend in with the surroundings.

We had a small room, since there were just the two of us, and though pretty basic in nature, it was comfortable enough for us. The accommodation wasn’t much to write about, but it was the hospitality which made our stay there so wonderful.

Our very first evening there, we met the owner as we wandered around the property, drooling over the jackfruits. The manager came up and introduced us, and he seemed stunned that I and Samhith were on a trip by ourselves. He reassured us that we would be perfectly safe, that we could go wherever we wanted, and that they would make sure our stay was comfortable. And they stayed true to their word, checking up every now and then, making sure we had everything we wanted. When the electricity failed a couple of times, they brought us a battery operated tube light, and got us whatever we wanted to eat from hotels nearby. Samhith soon became a big fan of the ‘pazham pori’, a type of banana fritters, a local delicacy.

We weren’t able to taste the home grown jackfruit, but the day we left, the owner offered to give us one to take home – whole!!! It was a tempting offer, but one we had to refuse, since we were on our way to Mysore, and wouldn’t reach home for another week. But he insisted on us taking at least a small bottle of honey they had just extracted from a hive. We gratefully accepted that, and now back home, and after tasting it, I am glad I did!

As I mentioned earlier, the property is still rather new, so everything was bright and clean and new. Maintaining this same level of cleanliness and neatness in the coming years is indeed a challenge, one I hope they will live up to. The only change I would love to see would be home cooked food served in a common area, so we could eat somewhere other than in the room, and meet other guests. Also, Kerala has such an interesting cuisine, it is always preferable to eat home cooked food rather than the typical hotel food. These are only changes I would recommend. As to their hospitality, I hope that never changes!