Communing with our ancestors at Edakkal Caves

“About the beginning of the year 1896, Mr. F. Fawcett, Superintendent of police, Malabar, discovered a very remarkable natural cave near Sultan’s Battery in the Wynaad. The walls of the cave are covered with rude, fanciful drawings and bear five short inscriptions.”

These are the words of the noted German Indologist and epigraphist, Dr. Hultszch, in his first description of what we call today, the Edakkal Caves. 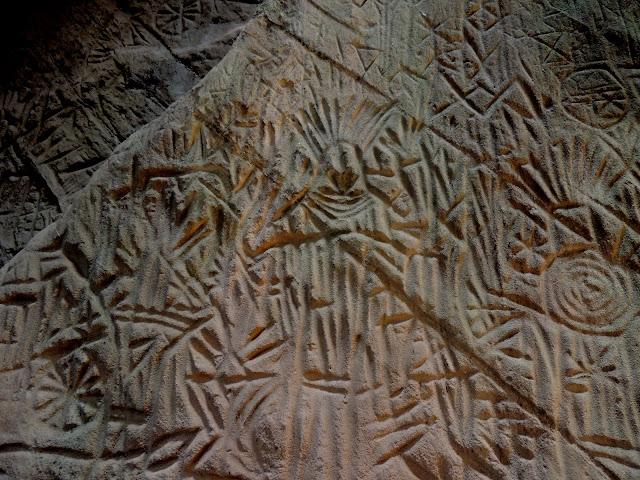 The caves, in the Wayanad district of Kerala, are considered an important link in our knowledge of our prehistoric ancestors. While they were known for long by the locals before their ‘discovery’ by Superintendent Fawcett, he must undoubtedly be given the credit of bringing them into the public eye and given the recognition they deserve.

Edakkalmala, as the hill is called, first captured Fawcett’s attention due to the annual pilgrimage made by people belonging to the local Chetty caste, to the summit. The pilgrims scaled the peak by a flight of dangerous steps cut into the rock to offer their respects to the goddess of the peak who was believed to reside in the cave. Curious about local traditions, Fawcett accompanied one such group of pilgrims and returned with a set of photographs of the interior of the cave.

The floor of the cave was then covered with a soft green mould to the depth of several feet. Noticing, in his photographs, some markings at the floor level of the cave, Fawcett returned, this time with a group of labourers, and set about clearing the mould, a process which took a long time, and repeated visits. Eventually, they managed to excavate to a depth of about 7 ft of mould before they struck the rocky base of the cave and stopped work. The presence of the mould on the floor is the best evidence of the age of the carvings, since it must have evidently grown over a long period of time, thus covering and preserving the carvings. It has since been estimated that the caves were inhabited at several times during different periods of history, and that the age of the carvings range over periods as early as 5000BC to 1000BC.

Walking over the well laid path on a hot summer day, listening to the history of the cave, I ponder over how our ancestors from the Stone Age arrived here. I am told that this mountain range falls on the trade route between the Malabar and the sea, but the uphill trek, without benefit of roads or steps, covered by dense jungles, would not have been easy, even for our hardy ancestors. Centuries later, the rough steps would have posed a challenge for the locals to brave each year for their annual pilgrimage, but what would have been the nature of the Englishman who not only followed them, but also unearthed the secrets of the cave? There is much we owe to him and those of his ilk. 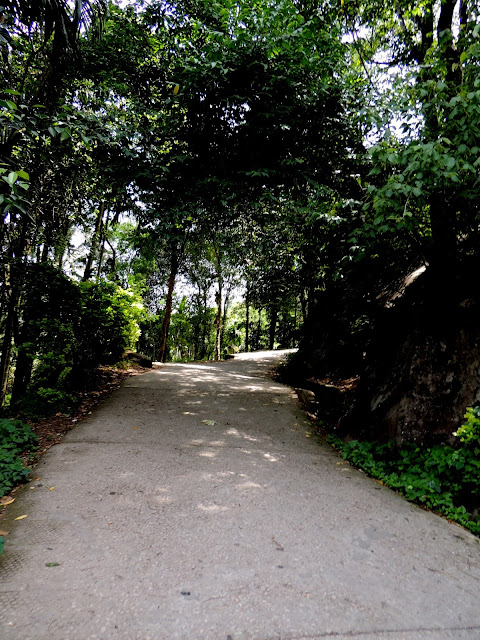 Clambering over the ancient steps which have been reinforced with steel and stone... 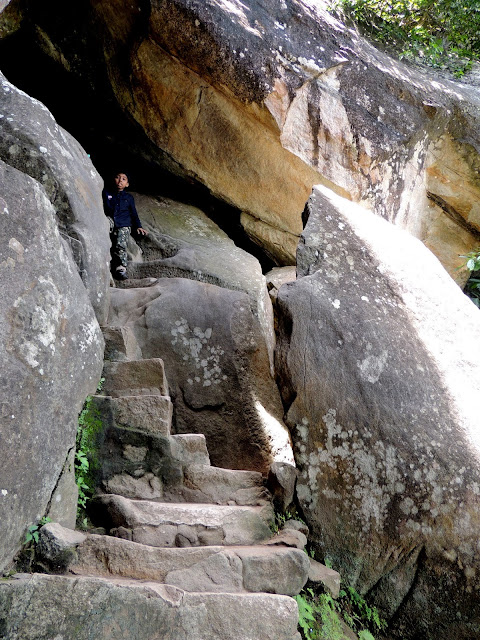 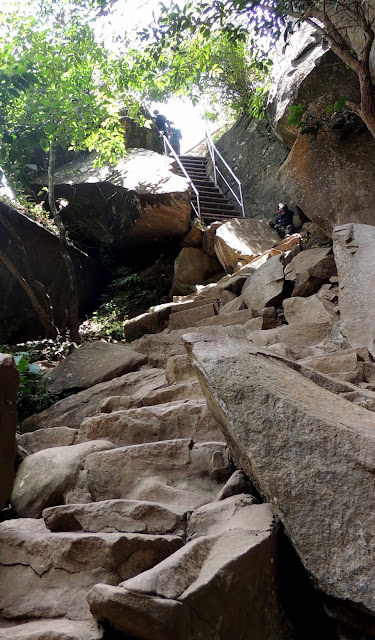 I feel minute – diminished by the mountains and those who came here before us. 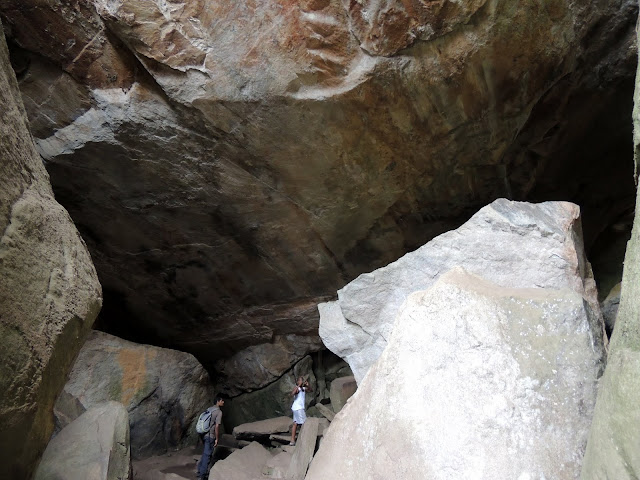 Finally at the cave – which is not really a cave, but a fissure, over which a rock has fallen, forming a roof .. 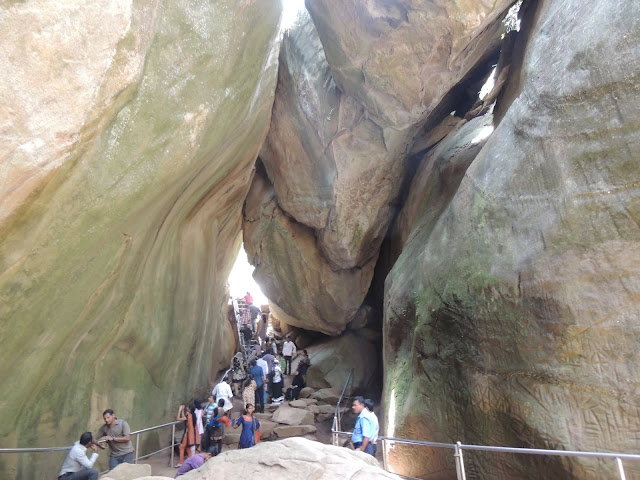 I stand by a railing,  speechless, partly by the effort I have had to put in to reach here, and partly with awe at the sight. 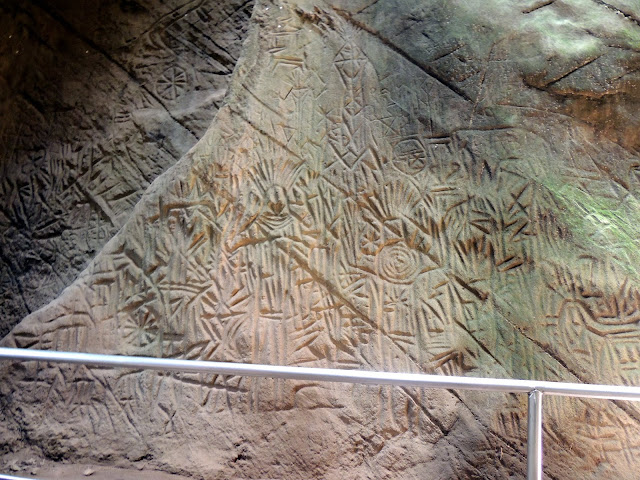 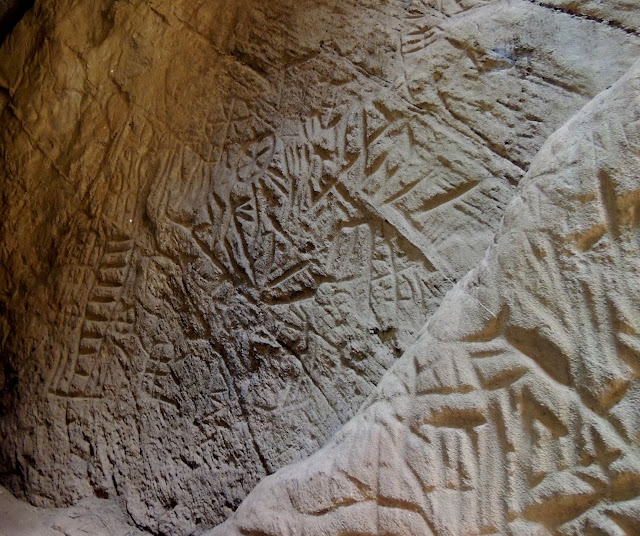 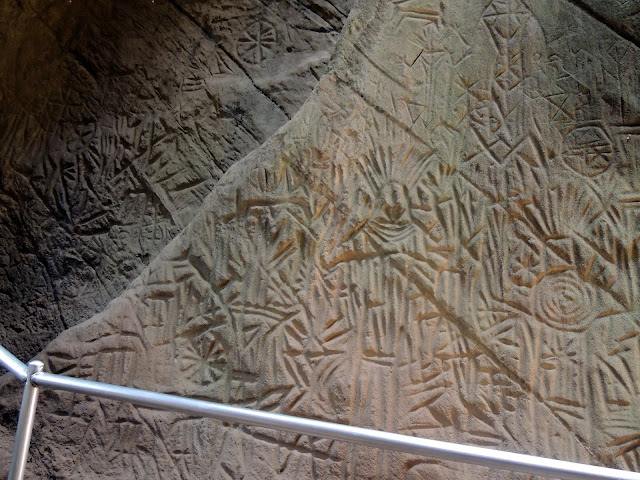 The carvings seem to be clustered together. At first glance, I can barely make out the details. It takes a while for me to start noticing patterns. A book I have bought at the ticket counter helps... a bit.
A male figure with a head dress (or  upright hair??) stands out amidst the rest. Is this the leader? 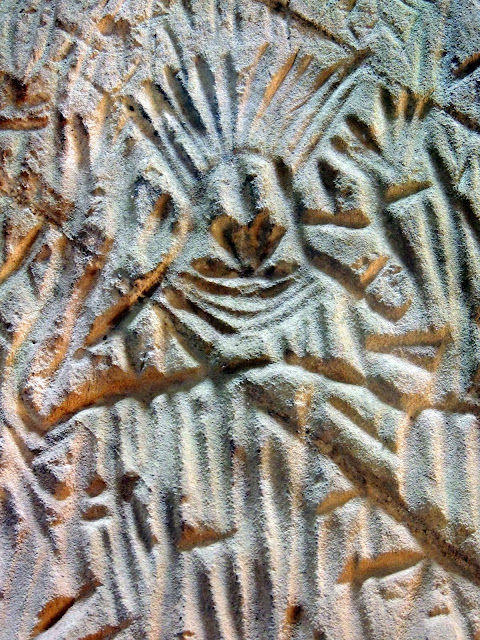 Surrounding him are other figures, some of which may be female. His harem? Or are they simply representations of the group? 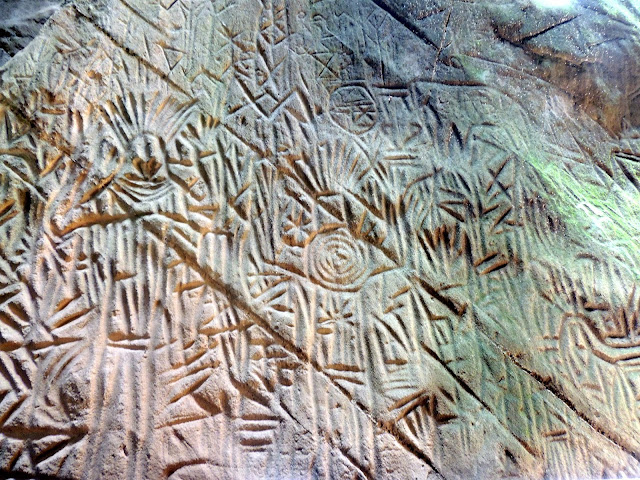 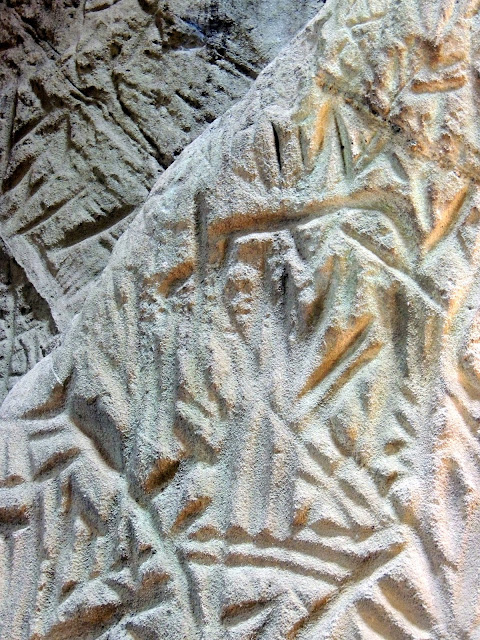 There are animal figures too... but they require a much closer and detailed look. All I can see are lines and circles. The circles look like wheels, but it is doubtful that the wheel was invented then. They could be the sun, I am told. Looks like our ancestors were sun worshippers too! 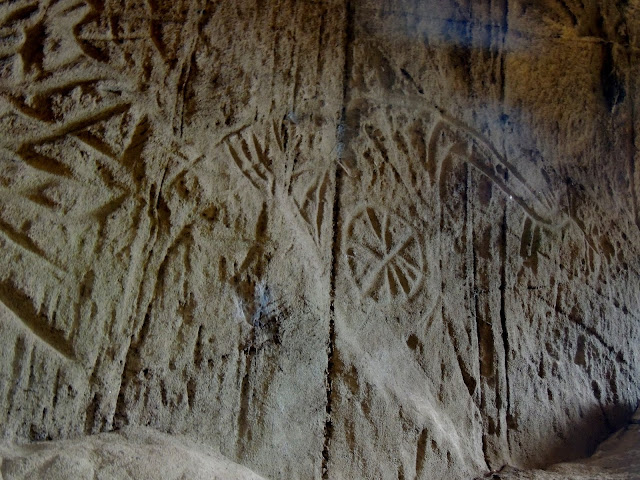 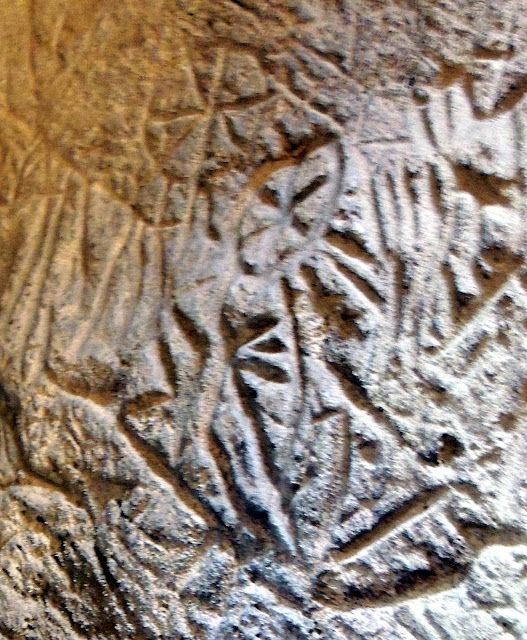 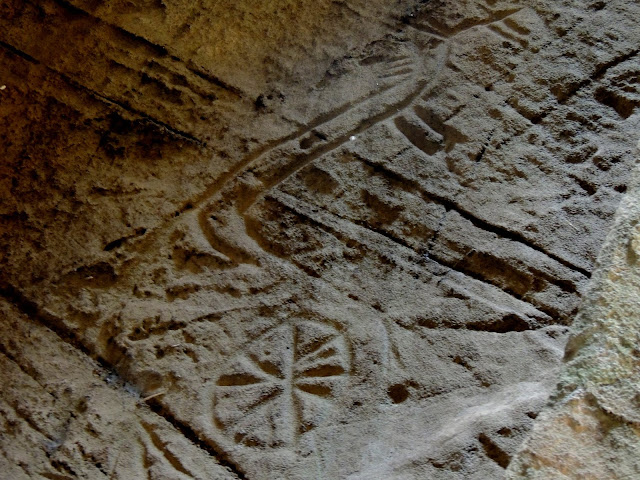 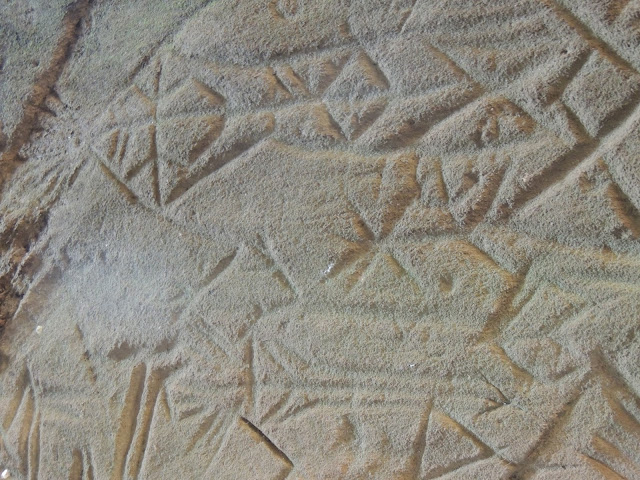 The cave also has a few inscriptions, such as this one....

Which brings us back to Dr. Hultzsch, who suggested that this be read as “Sri-Vishnuvarmma(nah) kutumbiya-kula-var(d)dhansya li(kh)ita(m); which means - the writing of the glorious Vishnuvarman, the propagator (i.e. descendant) of the kutumbiya family – the word kutumbiya taken as the proper name of Vishnuvardhan’s family. The second inscription is perhaps Tamil and meant for ‘pal-puli tan=antakari’: he who himself has made an end of many tigers”

Standing then, at the cave, I conjure up an image – of our stone age ancestor trying to live his life, hunting tigers for sport as well as food, and in his free time, or the time he was confined to the cave, probably due to the weather, passing time by etching figures on the wall – doodling, so to speak, and inadvertently leaving behind a memoir of his life for us, centuries after his passing!

The walk was quite tiring for me, though there were older people who walked more briskly than I did! Samhith enjoyed it a whole lot more...... 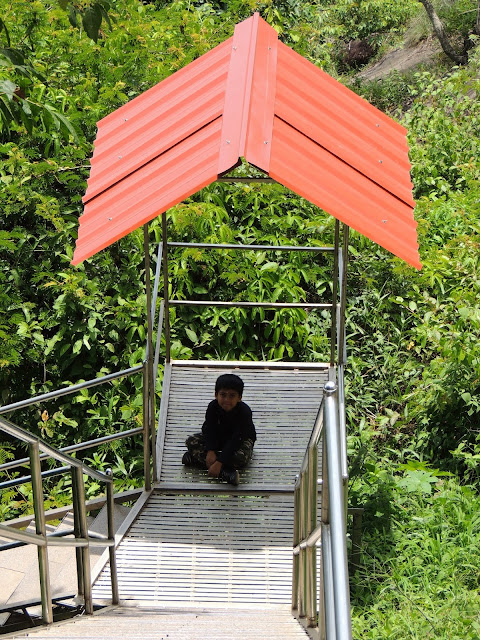 A special thanks to Nidhin Chandran, our guide from Muddy Boots. His patience with us, especially in light of our mood that day, speak volumes of his nature as well as his abilities to the make the most of any situation! Thanks Nidhin! I doubt I would have climbed Edakkal that day if it wasn't for you! 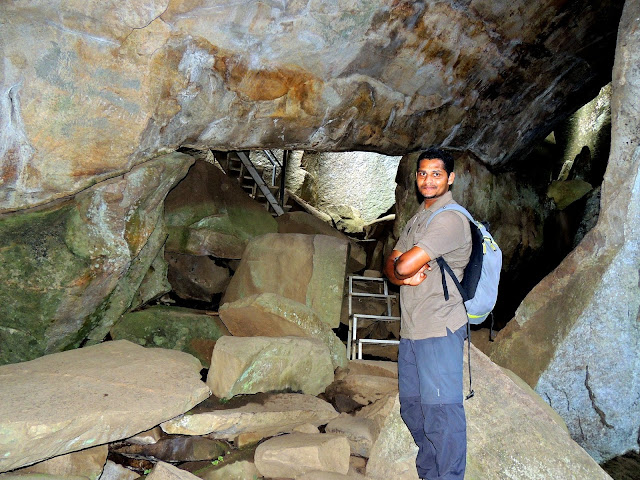