April 25, 2014
I passed this church often, but was always too busy to enter. When I did enter, after years of wondering what it would be like on the inside, I stood transfixed, by the sheer beauty of its elaborate stained glasses and the multitudes of marble memorials. This is the St. Thomas’ Cathedral in Fort, Mumbai, the first Anglican Church of Bombay, built in 1718. 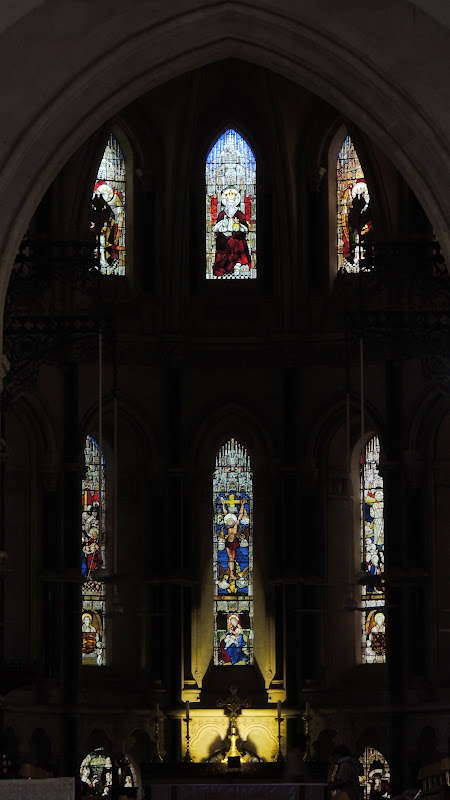 The church’s history goes back to the early days of British presence on the island. Most of us know that the island was part of the dowry of the Infanta Catherine of Portugal, on her marriage to Prince Charles II of England in 1661. The king, in turn, leased the island to the East India Company, who were quick to see the potential of the land and its natural harbour, and built a fort here. This church was meant to provide a place of worship for the new arrivals, and the foundation stone was laid in 1676, but practical and financial considerations led to the work being halted for over three decades! It was only in 1714 that an enthusiastic chaplain arrived, and re-started the work, which was eventually completed 4 years later. 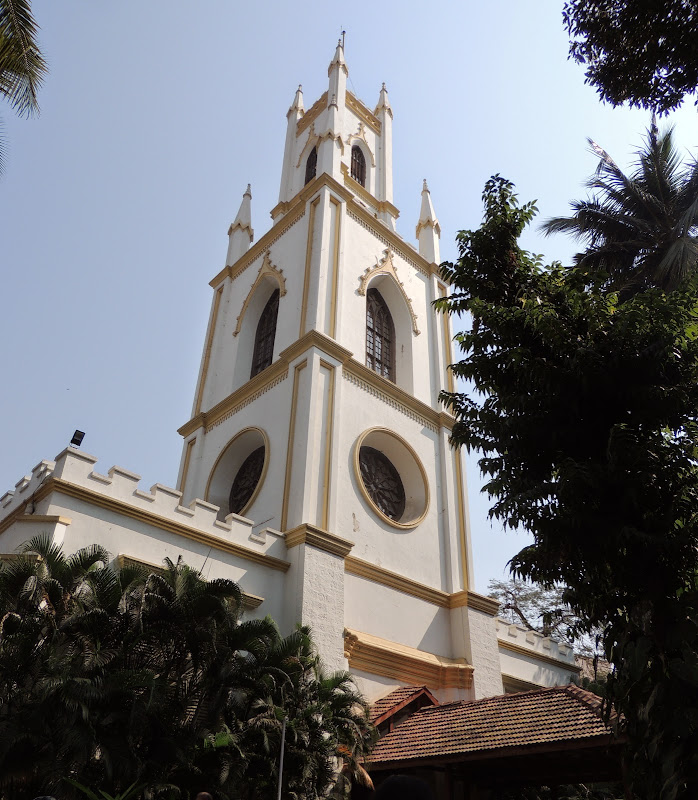 The highlight of the church is easily the stained glass panels, especially this one, depicting St. Thomas with the archangels, St. Gabriel and St. Michael. 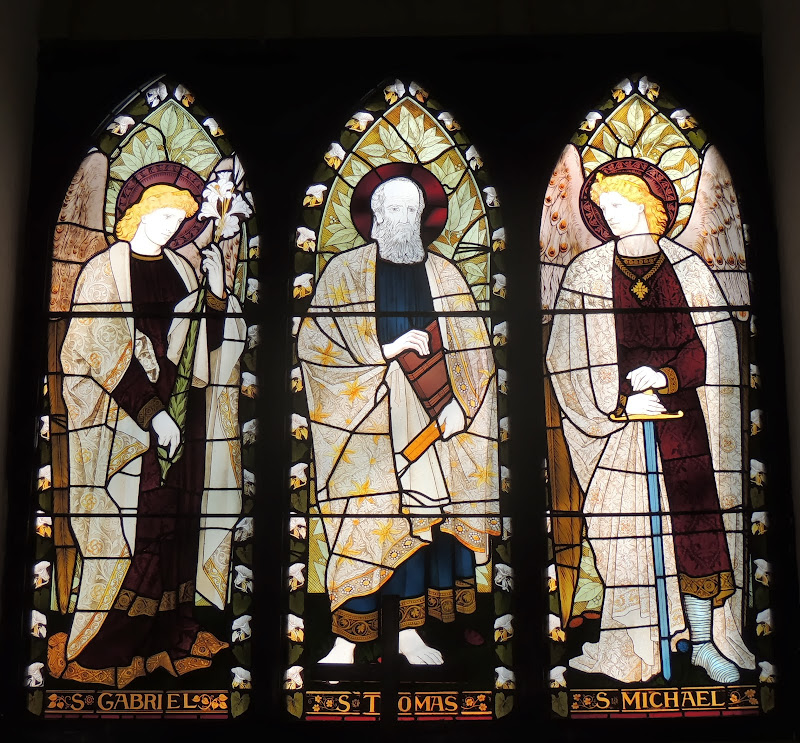 The church is dedicated to St. Thomas, one of the twelve apostles, and the one who brought Christianity to India. Here, he is depicted with a book, symbolising him bringing the Bible to India, and a T Square, indicating his profession as a builder. I was so amazed by the amount of detail on the stained glass, that I simply couldn’t tear my eyes away! 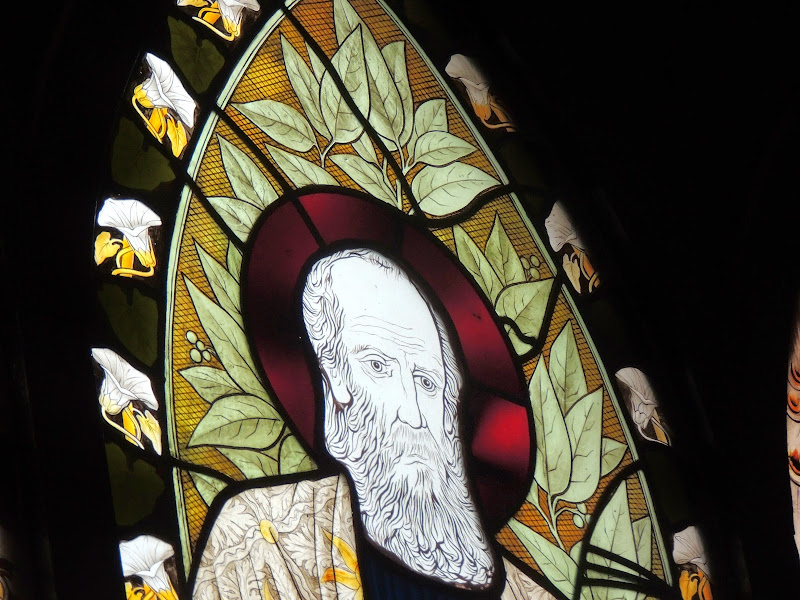 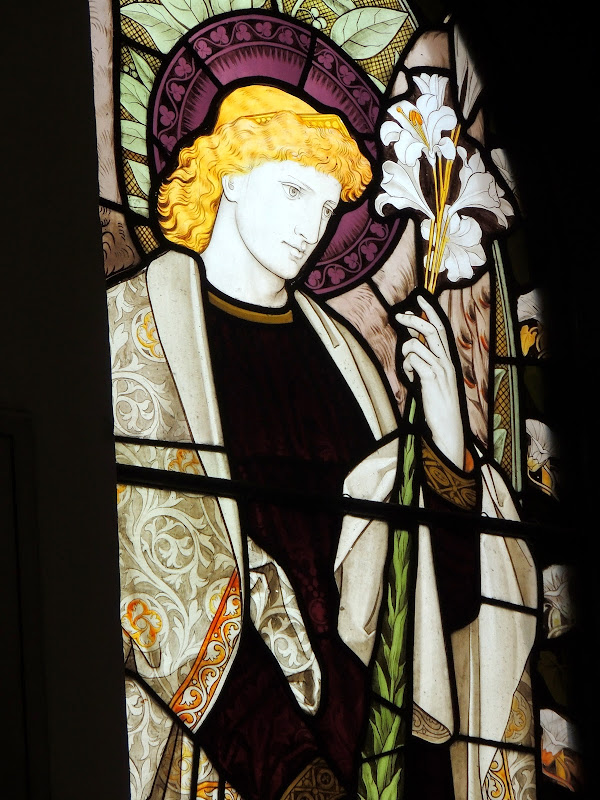 The stained glass panels over the altar are just as detailed and impressive, and these are easily among the most beautiful ones I have ever seen! 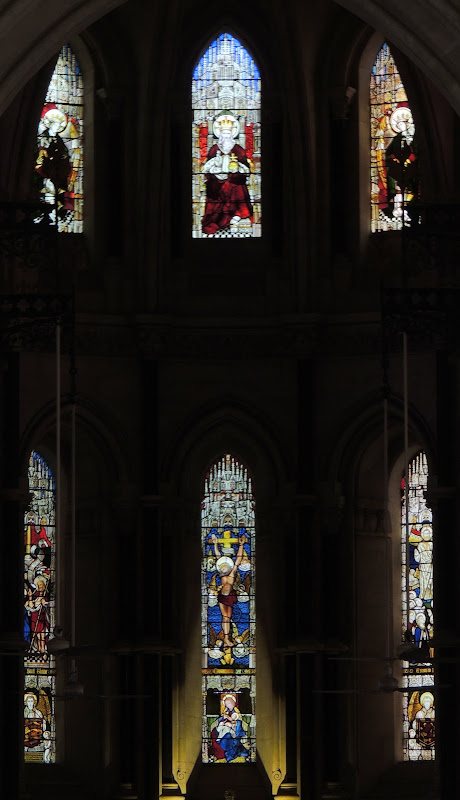 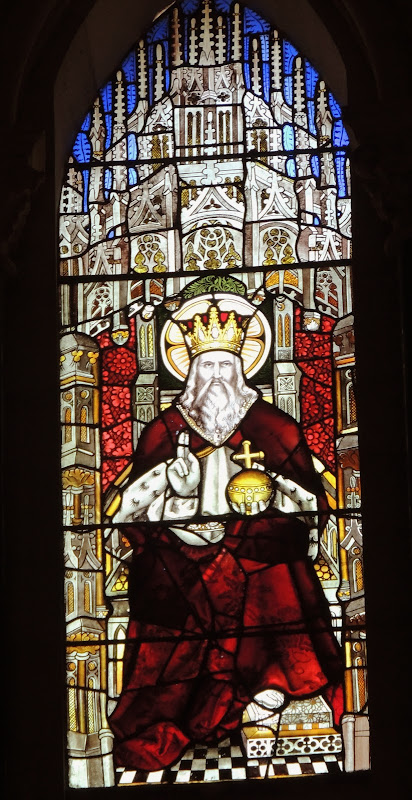 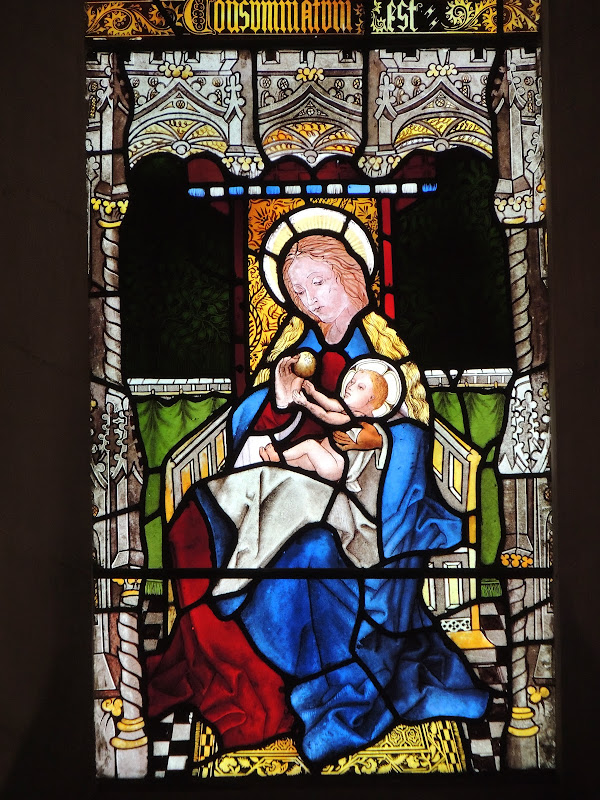 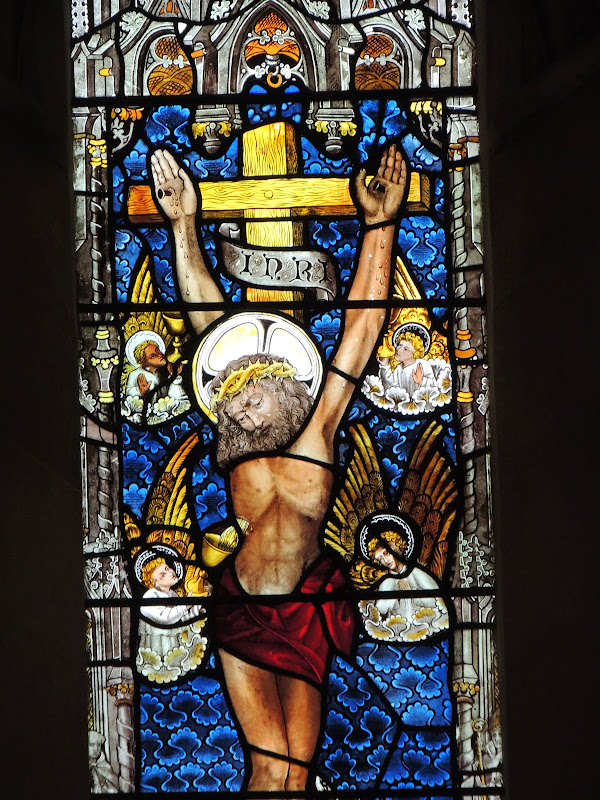 They, like most stained glass works, depict scenes from the Bible…I am no expert on stained glass, but having attended a workshop at the KGAF – 2014, I now know how difficult they are to make, and what a delicate art it is. I still have lots to learn though, so more about them later. 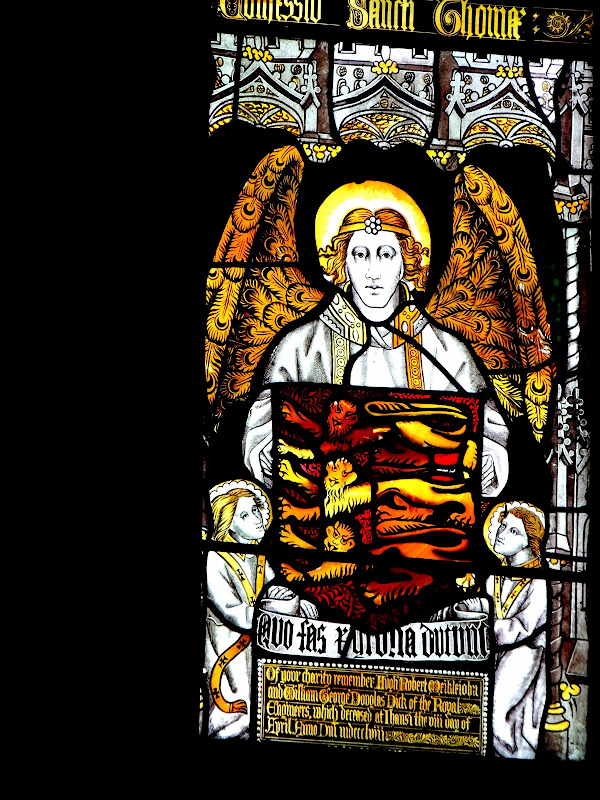 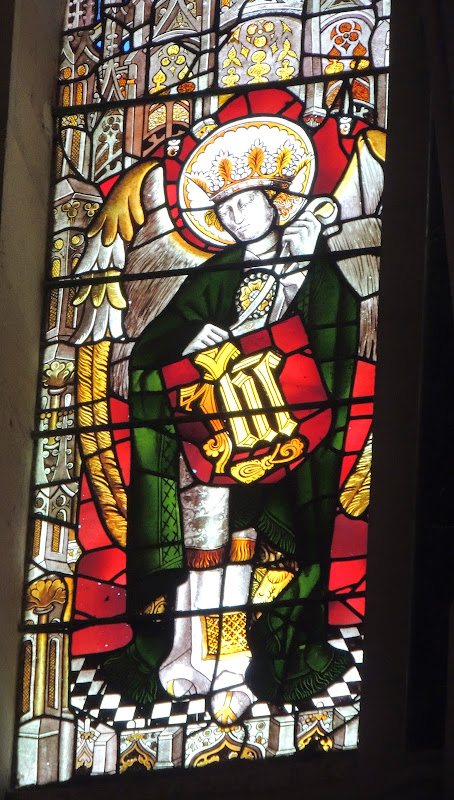 While the stained glasses reminded me that I was in a place of worship, I was most fascinated by the marble memorials which covered the walls…. mostly to British soldiers and officers. While I have seen graves and memorials inside churches before, this still came as a surprise, not because of the number, but their detail and grandeur. Take a look at this one, for instance…. 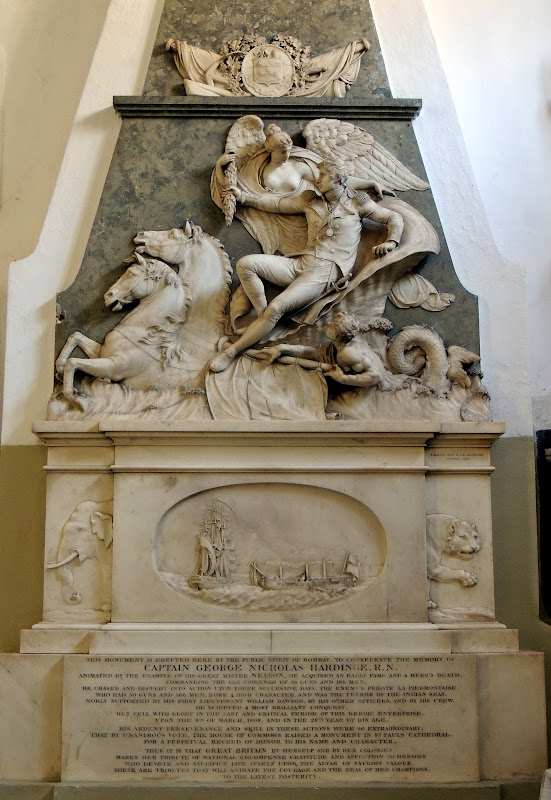 This is a memorial to Captain George Nicholas Hardinge of the Royal Navy, who died in 1808,fighting a French Frigate in the Indian Ocean. He was buried in Colombo, but monuments to his memory were erected in both, London as well as Bombay. What is interesting is the depiction, showing him riding the waves on horses (horses are believed to have been created from the foam of the ocean by Poseidon or Neptune, the God of the sea), and being welcomed by an angel. Even more interestingly, the plaque here compares him to his hero, Lord Nelson. Quite an epitaph, isn’t it? 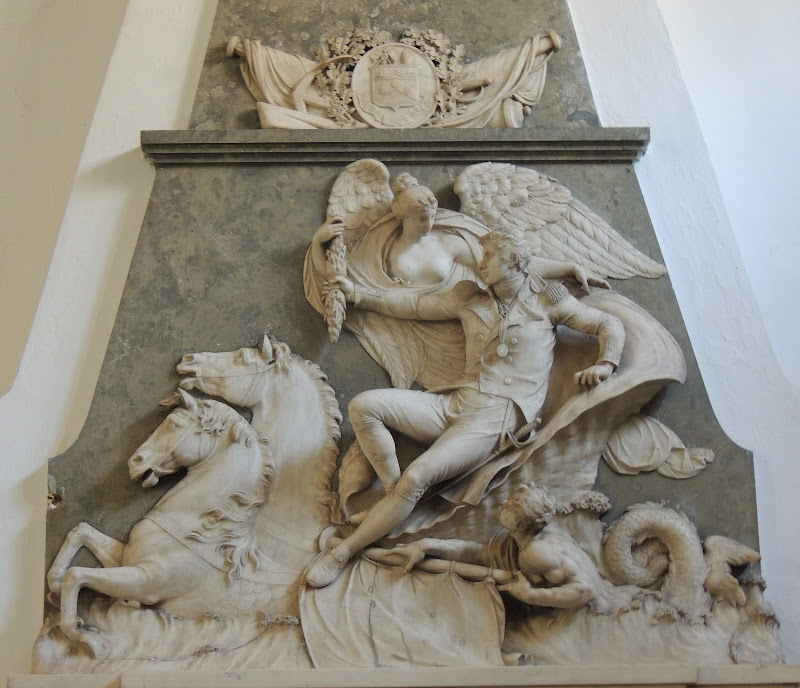 There are many, many others like this in this church, all of which, in some part, tell us the story of Bombay, and the people who helped it become the city it is today. Some of them also show a marked influence of Indian culture, such as this one, showing a grave under a banyan tree, and a Hindu priest standing by, his head bent in grief. This is the memorial of the Hon. Jonathan Duncan, the Governor of Bombay from 1795 to 1811. I wondered why a Hindu priest was depicted on his memorial, and learnt from a cursory search that he started the Sanskrit College in Benaras (Varanasi, where he was stationed before arriving in Bombay) to study Hindu Law and Philosophy. 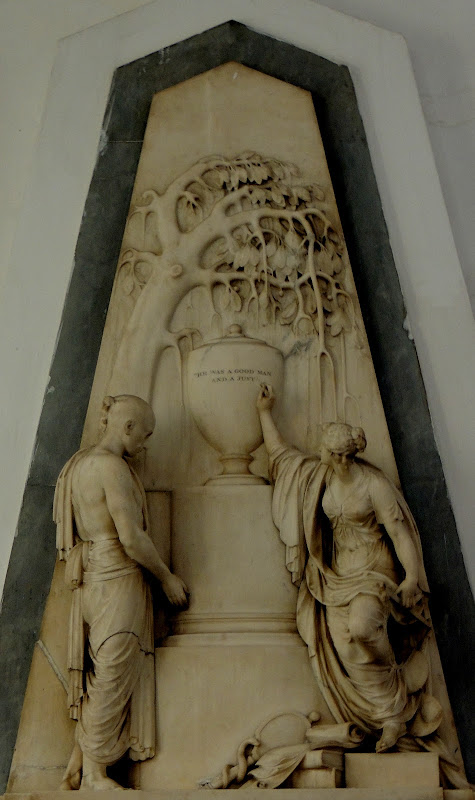 I can simply go on and on about each one of the memorials here. I am sure, put together, they will tell a story most of us wouldn’t have heard before. However, I will leave it to you to go explore them for yourself. The thrill of discovering buried secrets is, after all, something we all should experience! 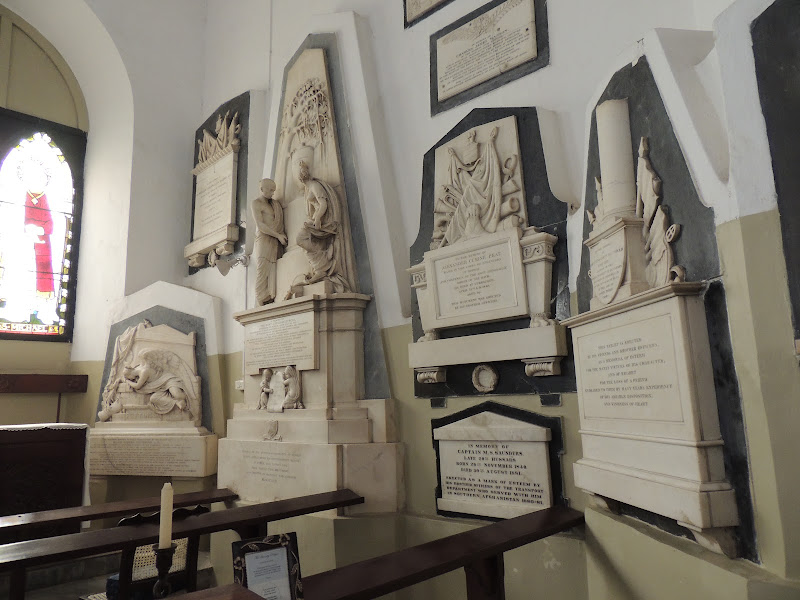 But, before I stop, there is one last memorial I must show you…… 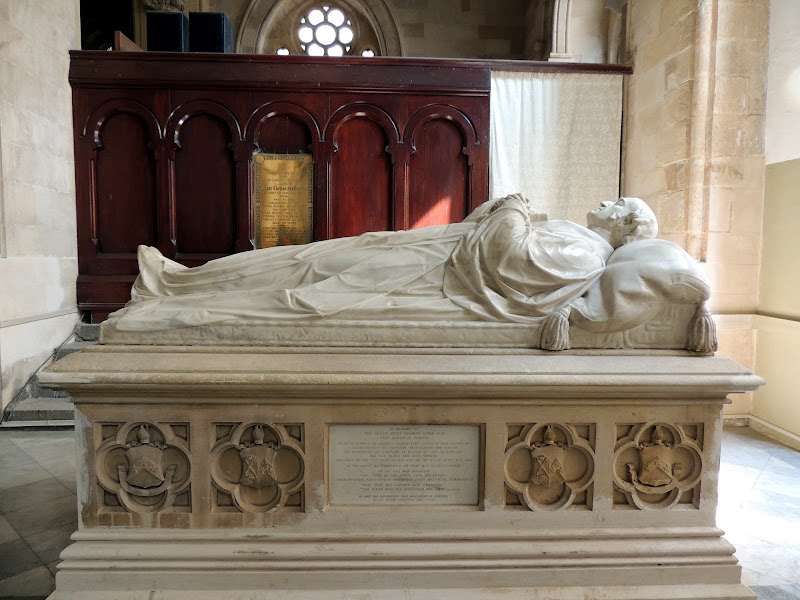 This looks like a sarcophagus, but is, in fact, a memorial to the first Bishop of Bombay – the Right  Reverend Thomas Carr. This church was elevated to the status of Cathedral when the See of Bombay was established, and the Reverend installed as Bishop, in 1837. Though he died in England, his wife erected this cenotaph here in his memory. The statue on the memorial is remarkably lifelike. A fitting memorial indeed, is it not?

The cathedral is located near Flora Fountain, on the road which connects the fountain to the Horniman Circle Gardens. It is quite unmistakable, and open to the public every day from 7 AM to 6 PM, so whenever you are in the area, do take out some time to go visit the church. I am sure you will come back with some interesting nuggets of British history in Bombay, and don’t forget to share them with me!

Did you know that the cathedral was the original Zeroth  Mile – the point from which distances to and from Bombay were calculated ?

I visited this church during the KGAF 2014 as part of a Heritage Walk on Stained Glasses of Bombay. The walk was an interesting one, which also took us to the Holy Name Cathedral in Colaba, but more interesting was a workshop on Stained Glasses which preceded the walk. It helped me appreciate the work a lot more. If you ever get a chance to be a part of these walks, do join, for the experience is an invaluable one. I hope the KGAF hosts many more such workshops and walks regularly, because I would love to be a part of them. Incidentally, in my opinion, this was among the best of the walks conducted during the KGAF, thanks to the workshop, and also the fact that there weren’t many gate-crashers. Here’s hoping for more such walks in the future!