June 19, 2014
For a very long time, the only fort I knew of in and around Mumbai was the Vasai Fort. That was before I learnt about the 8 forts within the city… Nevertheless, knowing about the fort wasn’t of much use, since I couldn’t visit it anyway. It was too far off for one thing, and somehow I didn’t know anyone interested enough to join me on a trip, just to see an old crumbling fort. After years of patient waiting, I finally visited the Vasai fort last week, with Breakfree Journeys, and a group of people after my own heart!


Vasai has a history which is way older than Mumbai. While Bombay was still a marshy island, Vasai or Bassein was a thriving port, having seen rulers come and go. Vasai is an island too, situated at the confluence of the Vaitarna river with the sea, and cut off from the mainland by rivulets. Puranic legends attribute the creation of the island to a demon, and the purification of the land by Parasurama.

The earliest mention of Vasai is on an inscription in the Kanheri Caves, dating back to the 2nd century, which speaks of a resident of ‘Vasya’ donating a cistern, a cupboard and a row of couches for the sick (Ref. Puratattva.in http://puratattva.in/2013/07/22/kanheri-inscriptions-2322.html). The city’s name is believed to originate from the Sanskrit word, ‘Vaas’ or residence. At that time, this region must have been a part of the Satavahana Empire, though it soon passed into the hands of the Rashtrakutas and then the Shilaharas (10th century). The Yadavas of Devgiri (Daulatabad) came next (11th to 12th century), and, after them, the Mohammedan rulers of Gujarat (1311 AD). They called the island ‘Baksai (or Baxai)’, until the Portuguese came along and captured it, calling it Baçaim (1530). The Portuguese rule continued for over 200 years, till the Marathas managed to capture it, changing the name to ‘Bajipura’(1739). Their rule, however, was a short one, and the island came under the rule of the British (1780), who, once again changed the name, to Bassein, and held it until India eventually gained independence, and restored the name to Vasai.

Today, we know Vasai more for the fresh vegetables that are grown there and brought to Mumbai, than for its interesting history. Not really surprising, considering that there is little here to remind us of it. The only connection left to its glorious heritage is the fort, and even this only tells us of the Portuguese part of Vasai’s history – of a time when it was known as Baçaim. A walk through the crumbling edifices of the erstwhile fort, gives us a glimpse into the prosperous city this was, in its heyday.

To quote Gerson Da Cunha from his book, “History and Antiquities of Bassein”…

“The Portuguese were in possession of Bassein for about two hundred and ten years, during which period it gradually rose to a state of grandeur and opulence that obtained for it, the noble appellation of “a Côrte do Norte” or “the chief city of the North”, in relation to the capital of Goa; for it had become the resort of the most prosperous fidalgos (Portuguese nobility) and the richest merchants of Portuguese India, so much that it became proverbial in those times to call a great man “Fidalgo, ou Cavalheiro, de Baçaim.” It abounded with sumptuous edifices, both public and private, civil and religious, which latter, besides the Matriz or Cathedral, consisted of five convents, thirteen churches, and one Misericordia, or asylum for orphans and maidens; and the ruins of which even at the present day serve as a silent epitaph of departed greatness.”

I wish I had read this before I headed off for the walk, because, not knowing of all these structures which once were part of the fort, I had expected a simple edifice – the core part of the fort – and was absolutely blown away by the size of the fort and its evident grandeur, even though many of the structures mentioned no longer exist. Our experience was enhanced by Andre Baptista, who conducted the walk, an archaeologist himself, and also one who traces his roots back to Bassein.

This was my first sight of the fort, and I was intrigued by these curved arches, which reminded me of Roman structures I had only seen in books. Little did I know then that we would see these arches all over the fort!

We began our walk at the Cathedral of Nossa Senhora da Vida (Our Lady of Life), which must have been one of the most important structures of the time. Today, only the façade retains remnants of its erstwhile grandeur, with bits of the intricate detail left to remind us of that time.On the inside, the barrel vaulted ceiling stands strong, even after all these centuries, and looking at the vestiges of colour left on them, I was reminded of the grand churches of Old Goa, and wondered if these too had been just as beautiful! 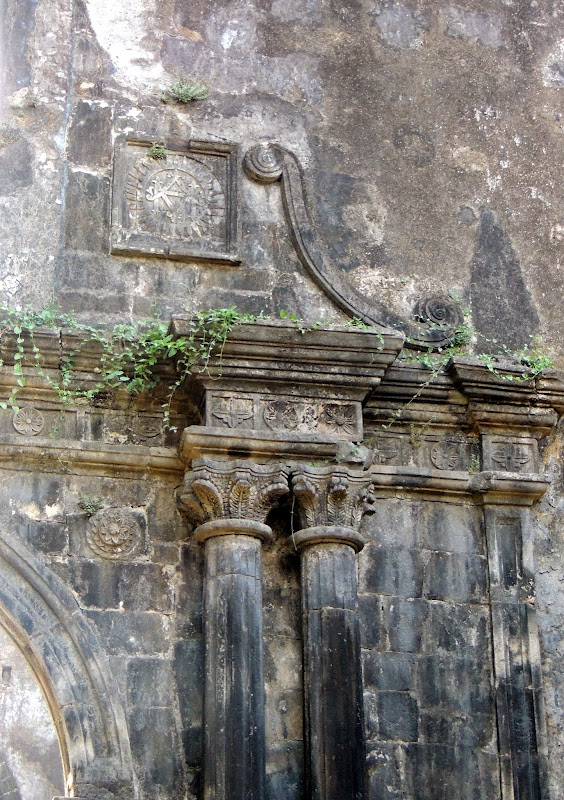 The citadel of Sao Sebastiao – the central part of the fort – shares a part of its wall with the cathedral. Along all the walls are structures, which might have been rooms or stables.

At one end is this, a massive chimney, so this must have been part of the kitchen area. 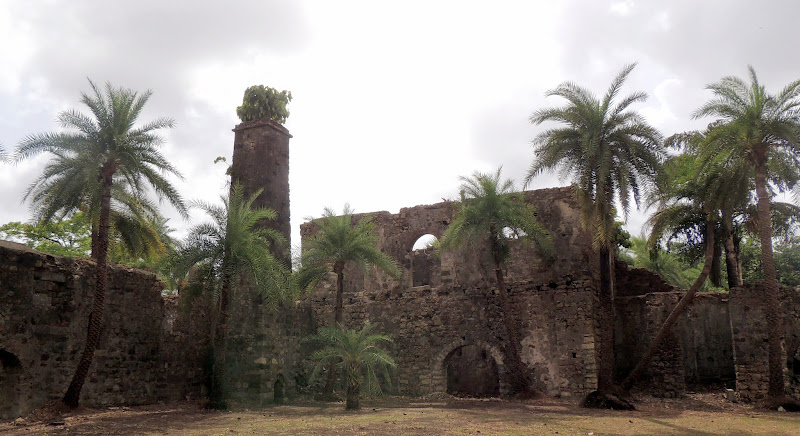 Till recently, the citadel was filled with trees and bushes (so we were told by Rushikesh and Andre), and was home to various birds and reptiles. The recent move by the ASI to clear and beautify the citadel has driven away the birds (at least for now), but it has brought to light structures, which, so far had remained hidden. 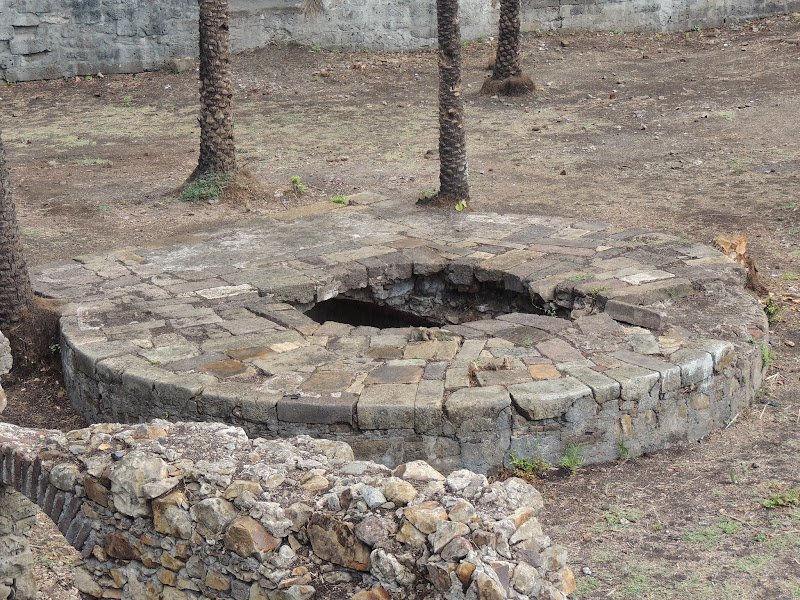 Interestingly, when we see old maps of the fort, we realize that the fort itself is in the shape of an irregular decagon (10 sided), and the citadel is a pentagon (5 sided). Each corner had a bastion, though few remain today.

We left the citadel by what was once its main entrance. 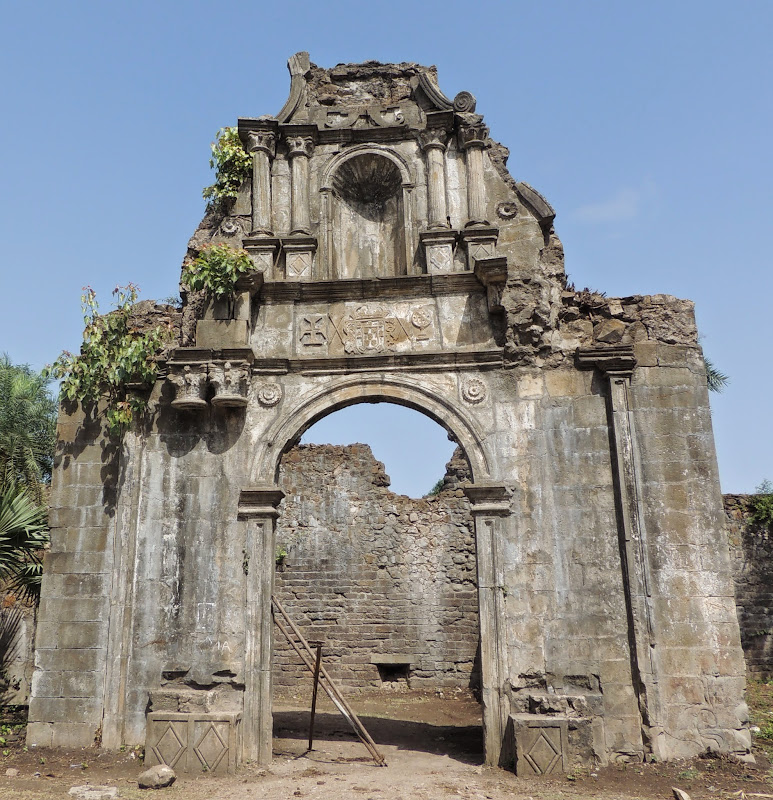 The arch still bears vestiges of the past – the Portuguese Coat of Arms in the centre, flanked by the Cross on the left and what looks like a globe, but is an armillary sphere (navigation device) on the right, representing the 3 Cs of Portugal – Crown, Cross and Commerce, which brought them to India.

Our next stop was at the Cathedral of St. Joseph, whose façade still towers over the rest of the fort. 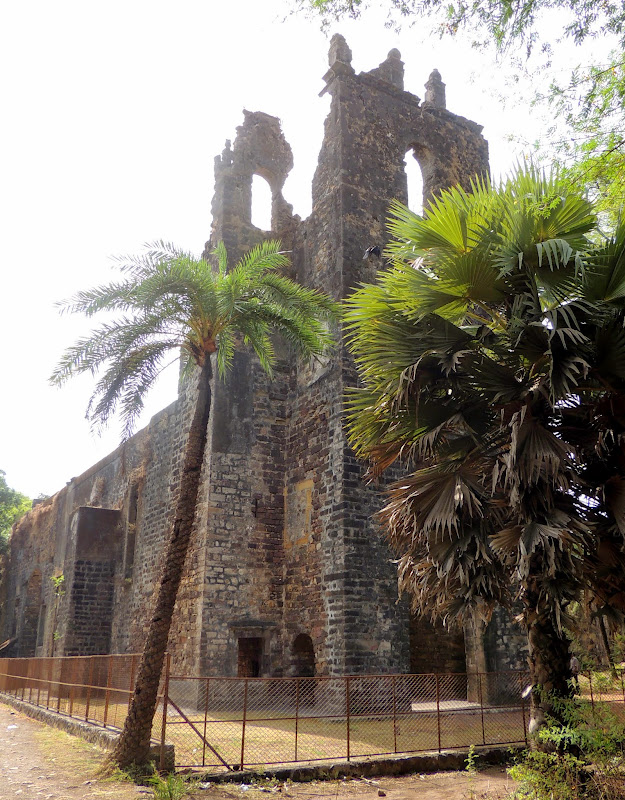 I believe you can still see the top of the tower while approaching Vasai by train.

Part of the curved staircase leading to the belfry still stands, and we climbed as far as it seemed safe to do so, and were rewarded by this sight of the creek… 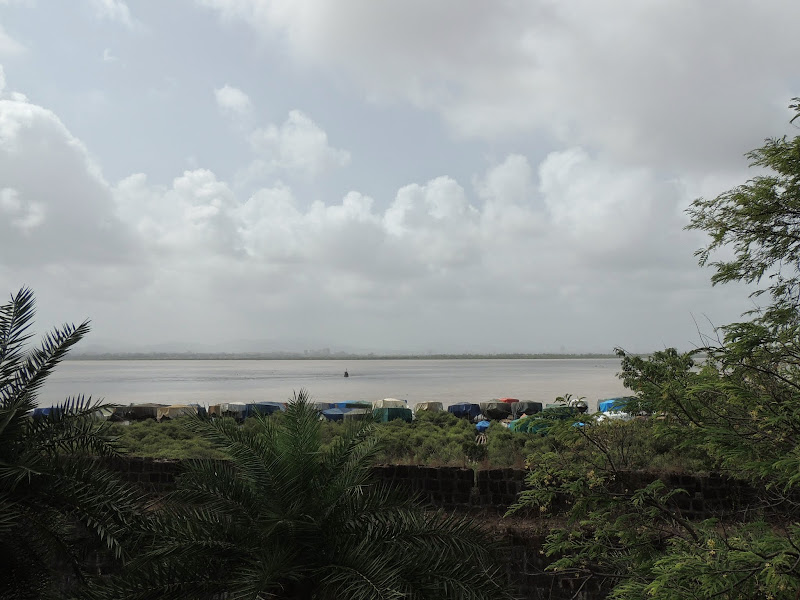 In one corner of this church, in what was once the baptistery, remain traces of a mural, which gives us an idea of how grand the church must have been! 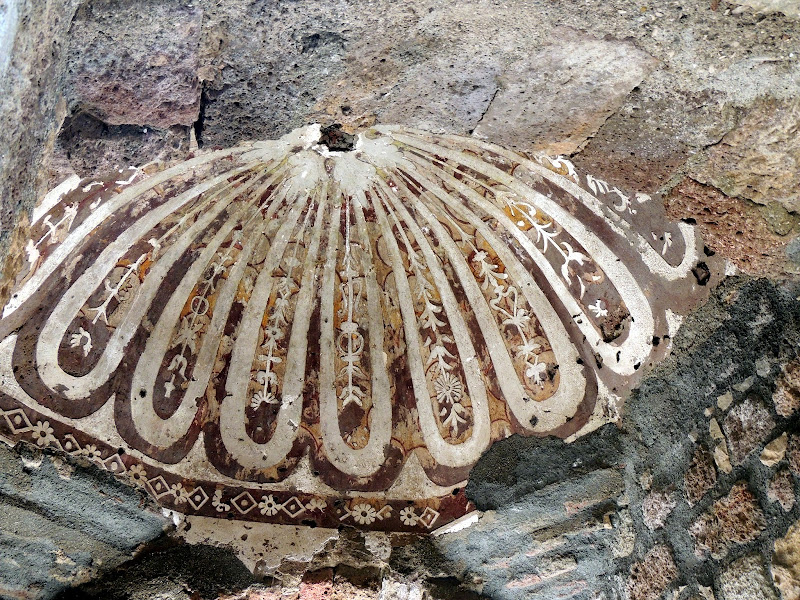 We headed next to the Sea Gate, or Porta do Mar, outside which stands this majestic old Baobab tree… brought to India by from Madagascar, this tree has a close relationship with the Portuguese, for they planted one wherever they lived! 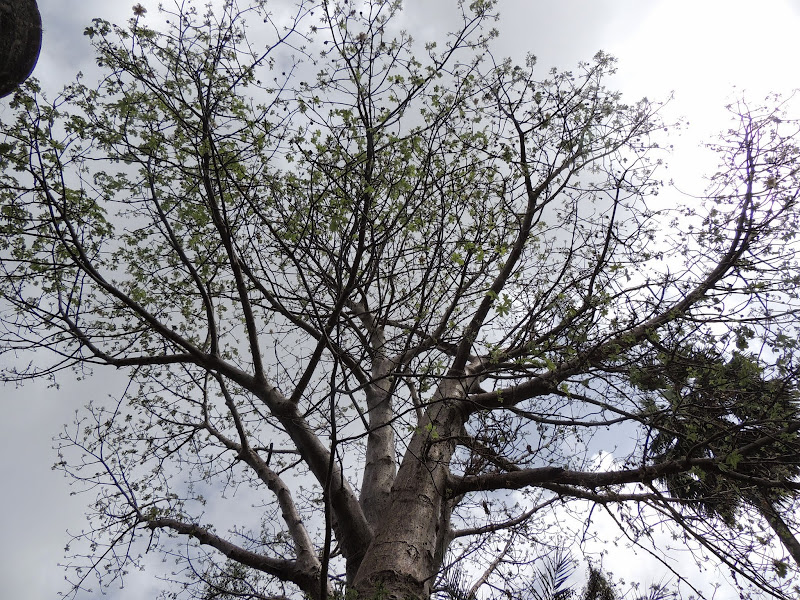 This is one of the few entrances of the fort which still resembles a fort, and outside it is a shrine, which still seems to be in use, going by this guy praying here…. 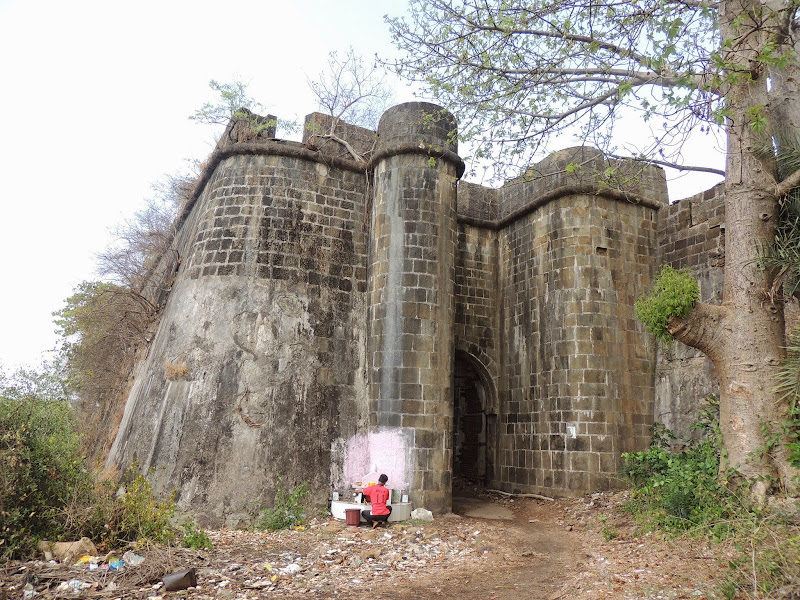 By the time we reached the Jesuit Church and Monastery, called the Church of the Holy Name, we were all tired, and needed some rest. This was probably the best place to do so, especially since the arched colonnade was perfect, in terms of shade as well as breeze. This must surely have been one of the most beautiful structures in the fort, if the remnants are anything to go by. 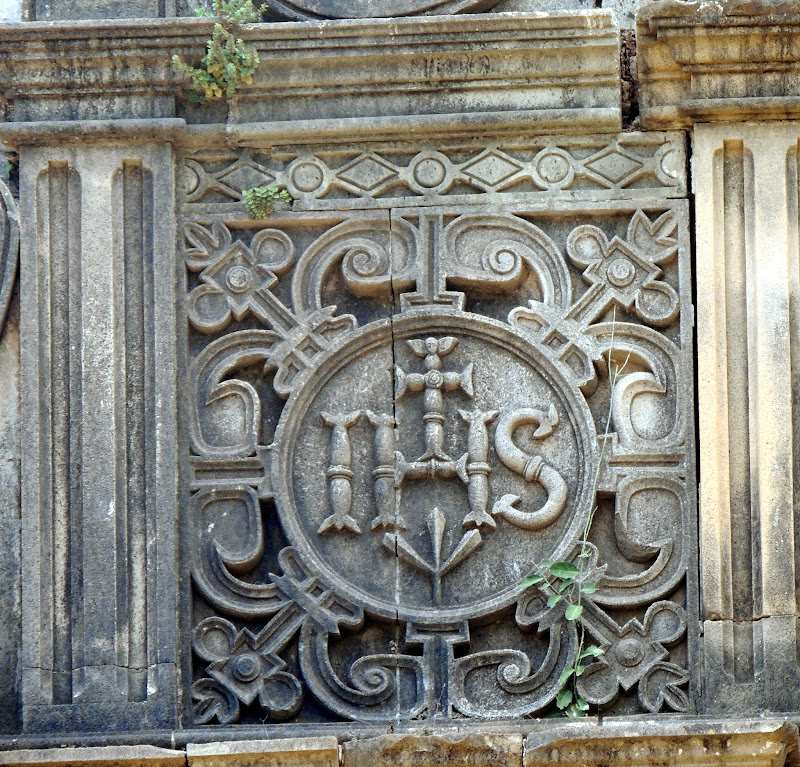 Besides, the steps to the belfry here, though circular, have no central pillar, but instead, use a cantilevered beam….

The façade of this church is also the most beautiful, or rather, has been the best preserved. The reason for this probably is that this church is associated with Saint Gonsalo Garcia, the first Indian to attain sainthood. The church, indeed, is today known as St. Gonsalo Garcia Church, and comes to life once a day each year when a feast is held to celebrate his birthday. Interestingly, I was thrilled to learn that I share my birthday with him!

We passed by the ruins of what was once the Church of the Augustinians, but all that remains are pillars, standing desolately amidst thick foliage… 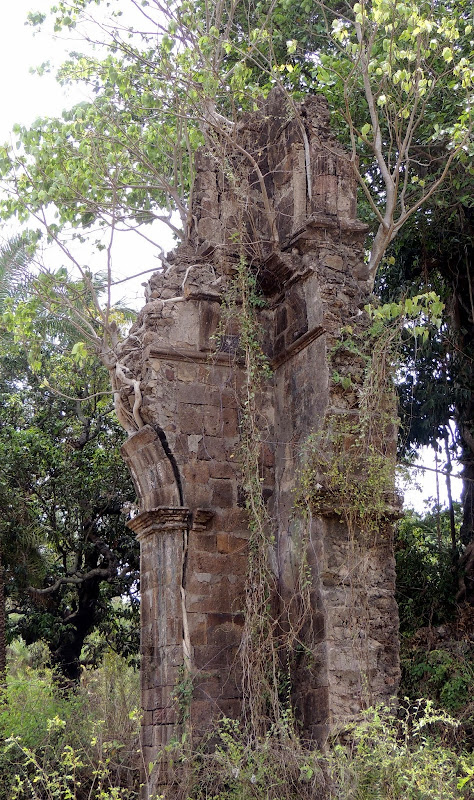 And arrived at the Franciscan church, where a film shooting was in progress… 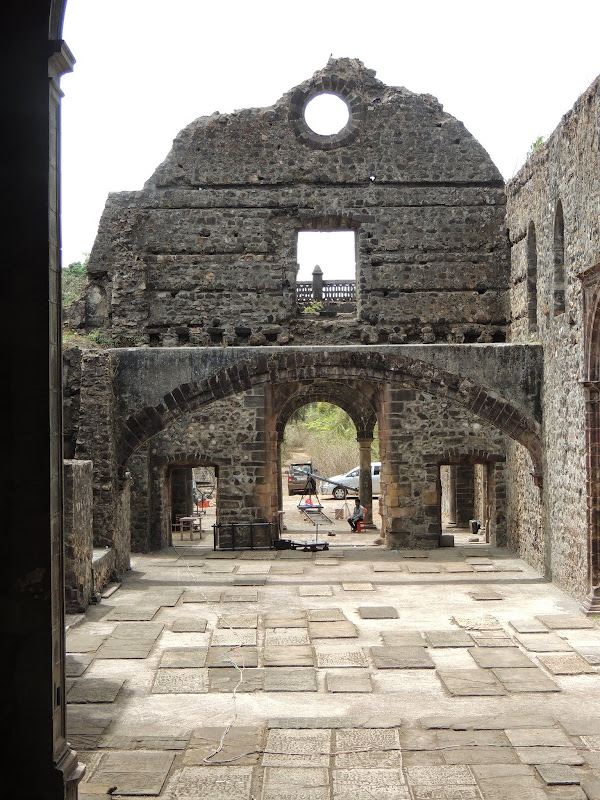 This is the Church of St. Anthony, and is believed to be one of the oldest churches built here. I was especially fascinated by the entrance arch here, made of sandstone… 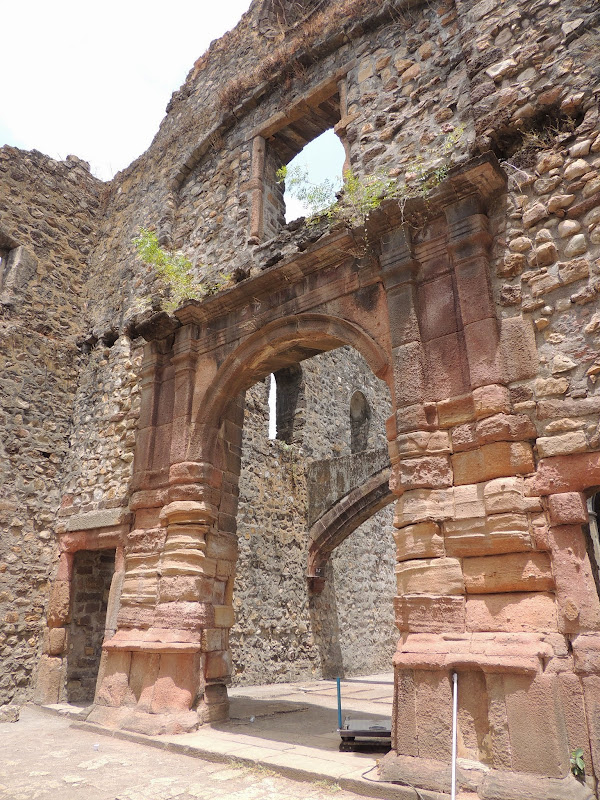 We next entered the fort again by the Porta da Terra, the land gate… 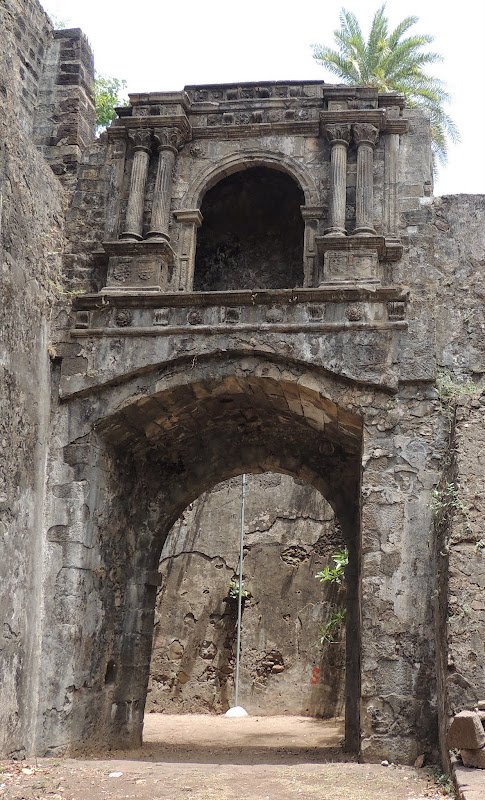 And climbed the steps to walk on the walls…. 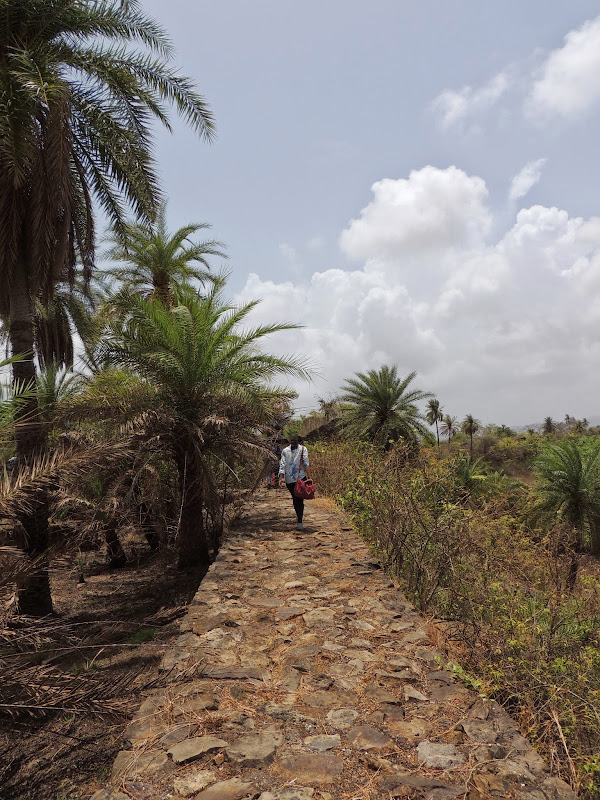 The Portuguese used Basalt rock in their buildings, which weren't too strong. Hence, they fortified their outer walls by building two layers, and packing them with mud, as we can see from this portion of the outer wall which has been broken to make way for a road… 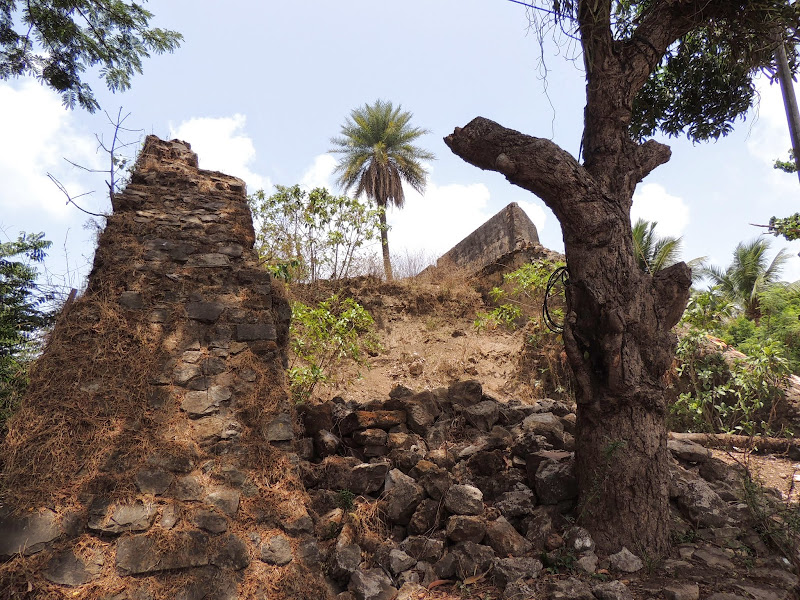 The hours of walking had finally taken their toll on us. Samhith especially was too tired. But we decided to make one last stop… at the Dominican Church, which, incidentally, was the first structure we had seen as we had entered the fort. 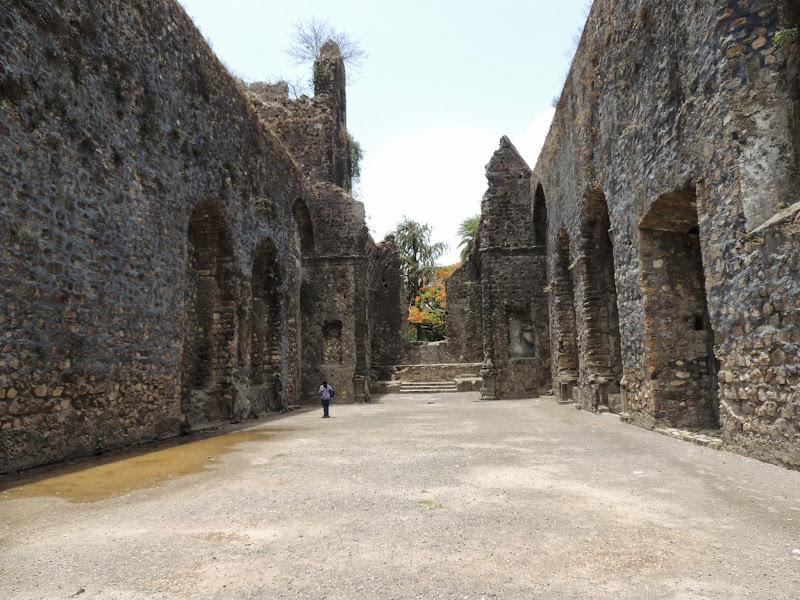 Here, the beautiful stone walls have been despoiled in the name of restoration with ugly concrete, and I wondered once more why we are so unmindful of our ancient systems which were so much more environment friendly, as well as a lot more beautiful! 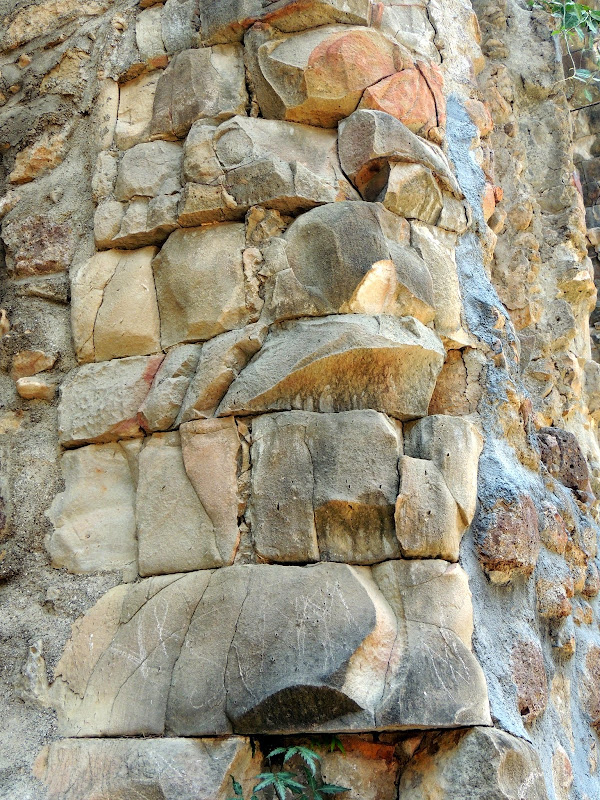 It took some effort to tear my attention away from the so-called-restoration, and focus instead once again on the beautiful archways which so fascinated me. 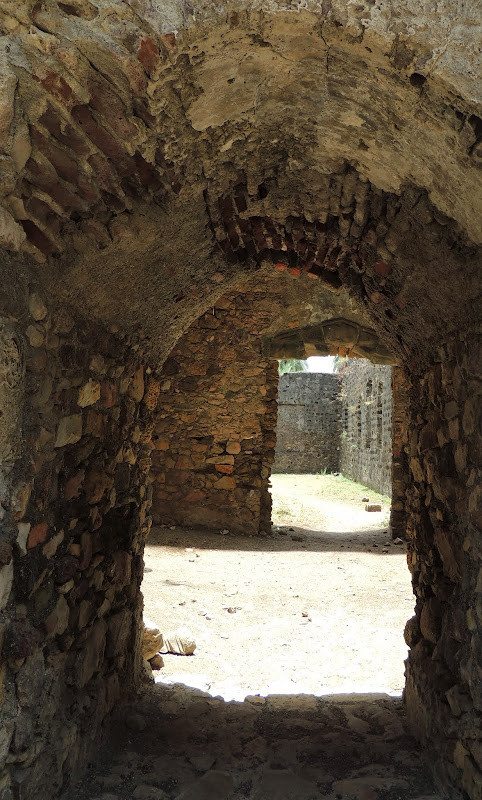 It was time though for us to say goodbye to the fort, though I wished I had more energy to explore it further. Hopefully, I won’t have to wait so long before I can make another visit! 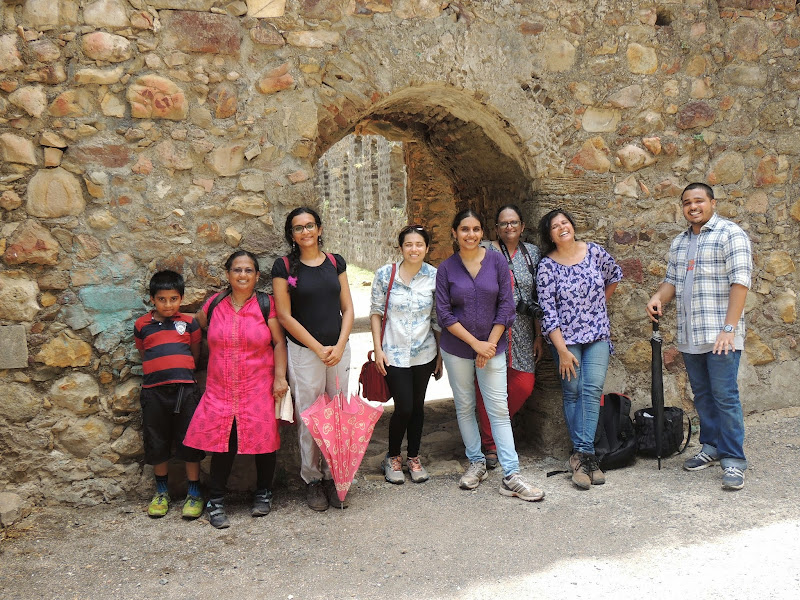