Stories of the Desert

“It takes a thousand voices to tell a single story”

All of last week, sitting on my computer, trying to write the next post in my Suryagarh series, I was lost – for words, for ideas, for inspiration. Most of what I wanted to say had been said by others before me, and I began wondering if I should be writing at all. Then, this morning, I stumbled onto this quote, and suddenly, the ideas poured forth, as if a thousand voices were indeed telling me their own stories! And therefore, without much ado, here they are… 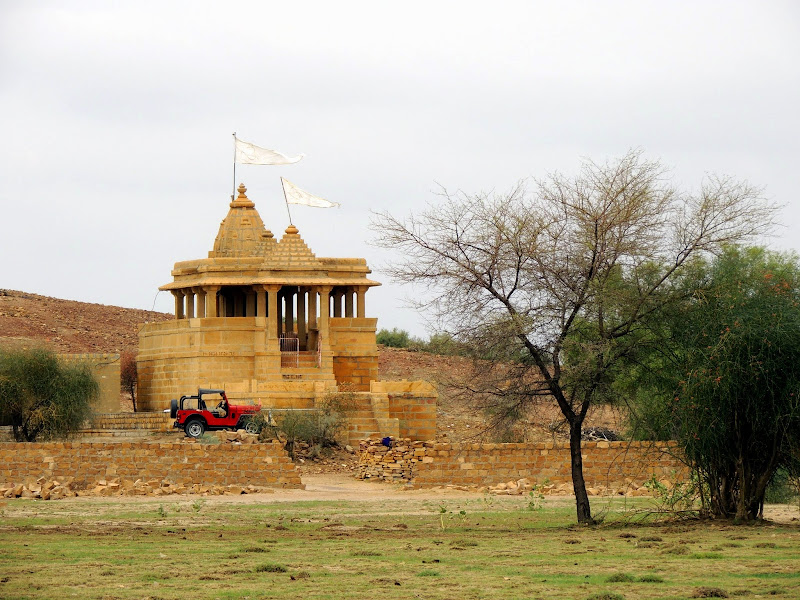 A temple stands in the desert, the golden stone shining in the morning sun, a bright red jeep adding a dash of colour to the scene. The priest who drives the jeep tells us the deity is called Muhar Mahadev, and he once stood amidst a village, which has long been buried under the sand. Around the temple are what appear to be smaller shrines, each a block of stone topped by a Shivling and Nandi. I wonder if these are samadhis or cenotaphs, and the priest corrects me. These are thanksgiving offerings to the Lord, for fulfilling the wishes of his devotees, an ancient custom in these parts. I think of how interesting customs across the country are, and go on clicking them, not even realizing that the others are ready to leave. I don’t miss the cars, but Sid does, which is his story, and therefore best told by him. Read about it here! 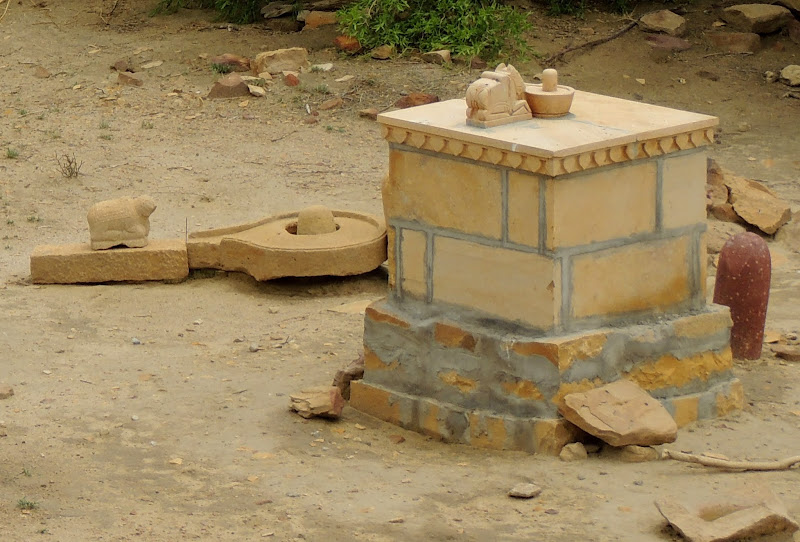 Our next stop is another temple – Nabh Dungar, situated atop the highest point in the region. The goddess here is one of nine sisters, located across Jaisalmer, each one a caretaker, or protector of the area she watches over. Interestingly, the idol of the goddess is a block of stone, on which are engraved, apart from her, various other deities. In front of her is her Lord, Mahadev again, this time, perfectly spherical – an interesting form. The priest here has loads of stories too, but isn’t too clear on who the other deities are. “How does it matter?” he asks. “You can think of them as any of the gods you want them to be. The important thing is that they are gods!” He does point out that the stone the goddess is inscribed on, isn’t from these parts. It has obviously been brought from elsewhere, probably by the traders of long ago. I wonder where she is from, and make a mental note to visit all her sisters on my next trip to Jaisalmer, whenever it is! 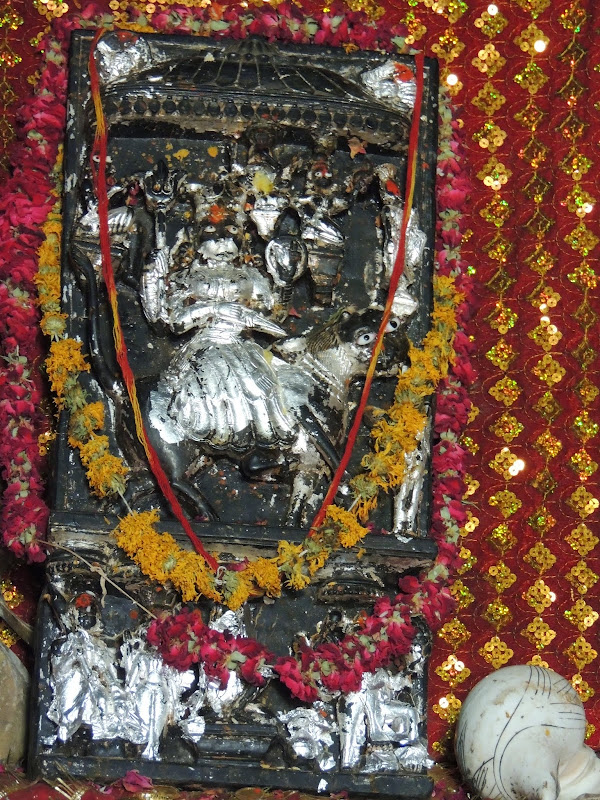 The sun shines brighter than ever, winning a battle against the monsoon clouds as we approach  Lodurva, the ancient capital of the region, before Jaisalmer came into being. There is just a village here now, and some ancient Jain temples, which have withstood the test of time, and thanks to some renovation, show us just how beautiful temples can be! 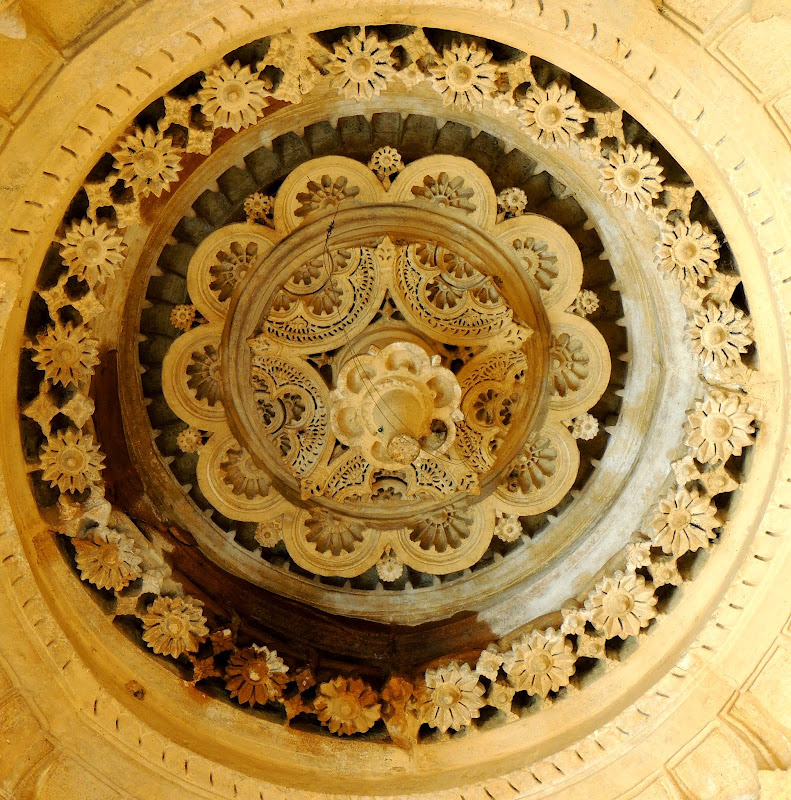 While the temples are interesting, and their story makes me wonder what Lodurva would have been like, in ancient times, the story that stands out here is a modern one, of a villager from this unheard of village, who is on Twitter, and who, recognizes and befriends us! Again, this story is not mine to tell, but you can read a first-hand account here if you can read Hindi, or the closest account in English, once again from Sid, here. 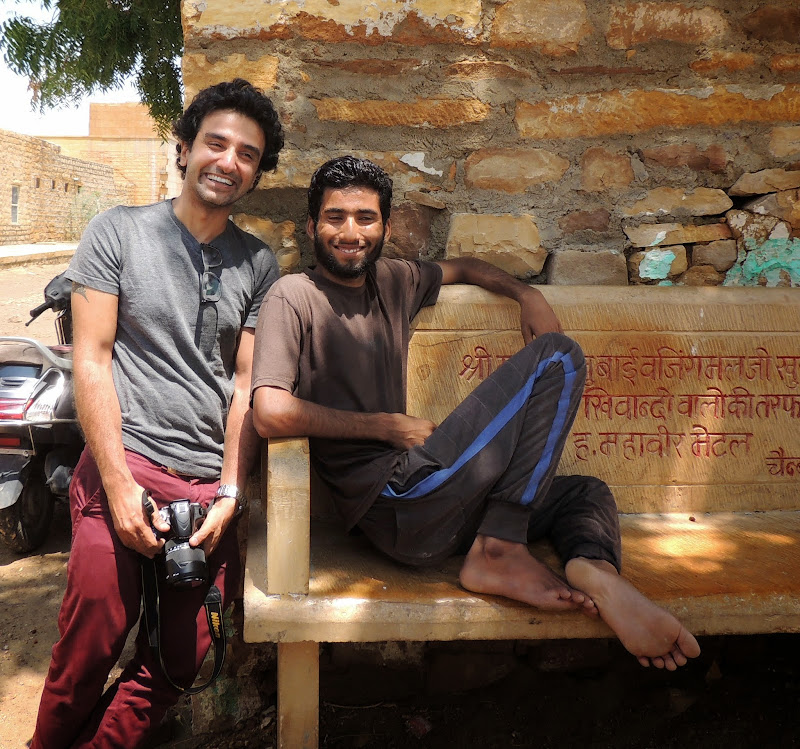 On the outskirts of the village, we stand on the mountain ledge, overlooking what appears to be just a valley, till we are told this used to be the river Kak. Today, the river runs dry, the monsoon not strong enough to bring on even a trickle of water. Here is a sort of shrine, in ruins, but telling us another story – this time of love and longing. This is the story of Mumal and Mahendra, a folk tale told often in ballads. Like all such stories, it is a tragic one, but standing at the spot where they met, I think of how exciting it must have been, braving the current to meet one’s lover, out of sight of the rest of the world! Nisha has a detailed version of the story on her blog, so head right over to read it!

If the desert has stories like these, of love and faith, it also carries along mysteries and curses. From the Khaba Fort, we gaze upon a massive village, completely abandoned, houses falling apart where they stand. This is one of the 84 villages of the Paliwal Brahmins, which were mysteriously abandoned overnight. The most popular among the 84 is the village of the Paliwal chieftain – Kuldhara, which we visit later, in the night, but the Khaba village is our first introduction to the tragic story of the Paliwals. 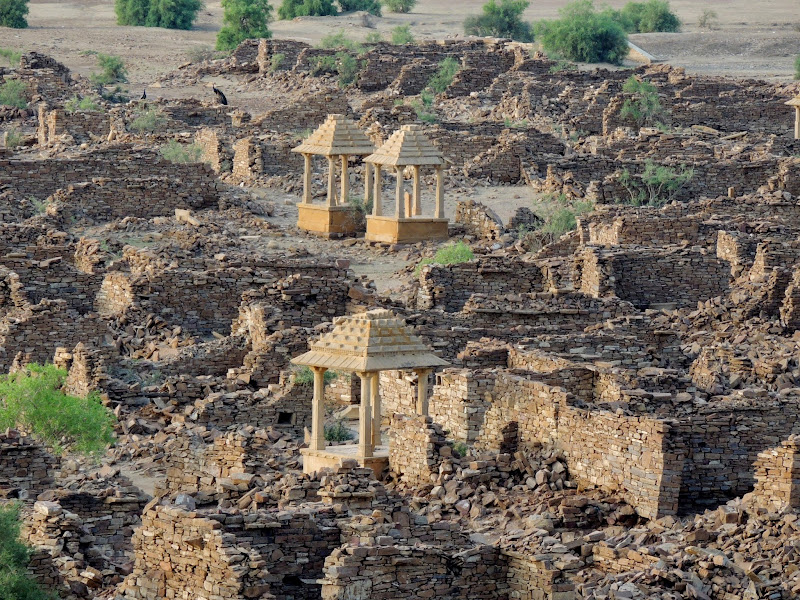 The Paliwals were a community of traders who settled in the desert, and lived in harmony with nature, devising simple, but efficient techniques to conserve water and cultivate crops. They built an intricate network of canals and tunnels, only traces of which remain today. They actively traded with the merchants who came via the silk route, and soon grew in wealth and strength. However, along with prosperity, came jealousy and rivalry, and they became the object of wrath of the local rulers. Cenotaphs mark the graves of those tortured to death, and Sati stones are grim reminders of women forced to follow their dead husbands. The bitterness, hurt and disappointment seem to hang over these areas, leading to rumors of haunting and ghosts. 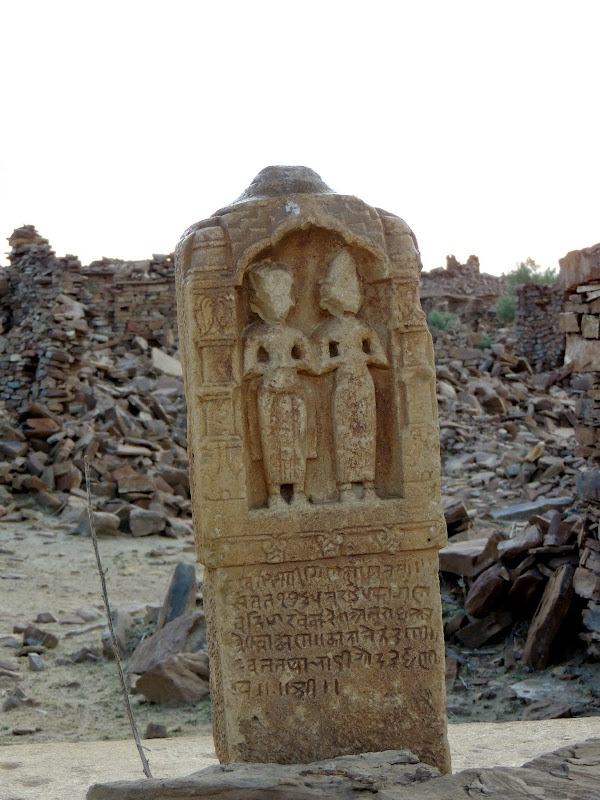 I take off my shoes to cross a seasonal stream, and as I walk over the wet sand, which sinks under my toes, I think of how time has shaped this land, telling us its own story in the process. 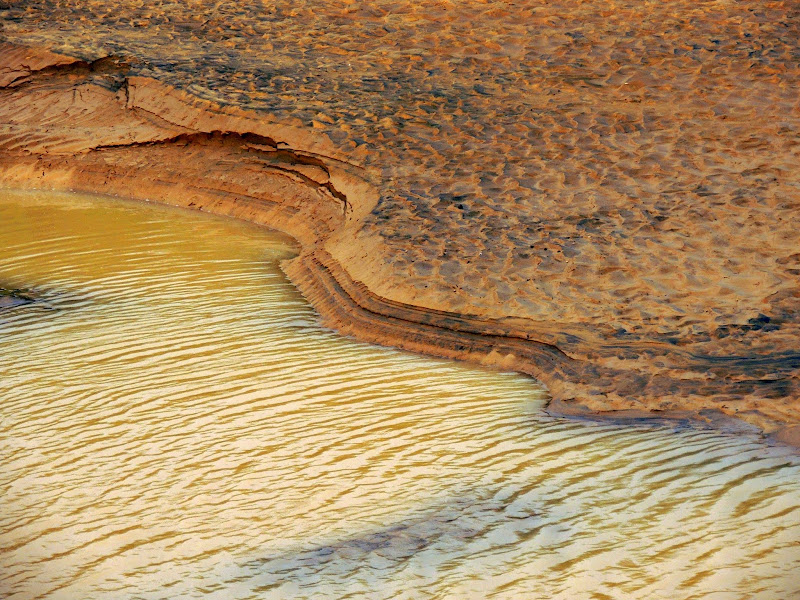 Here, at some time, flowed a river. Here, everything was wet and green. And then, time passed, the river dried, the earth rose up, and sand and stone took over. At places, there is clay, elsewhere the golden stone which is so coveted; now and then, we catch a glimpse of reddish rocks.

Time has altered too, the stories this land has told. Ancient men may have lived by the river, till it eventually changed its course. They made way for the desert nomads. Traders found their way here, and villages sprang up once again, only to be left abandoned and forgotten. Men lived, loved, gained, and lost, and time passed on, leaving only memories behind. Their stories are here, waiting to be heard.

All we need is the will to listen, to understand. For, how true is it, that all these voices tell us that one story – of the desert!

I was invited by Suryagarh , Jaisalmer, to experience the Monsoon Magic in the desert. These stories are from the various places we explored during our trails, which was appropriately themed ‘The Desert Remembers’.