Book Review: The Guardians of the Halahala; The Vikramaditya Trilogy, Book 1

February 26, 2015
I am posting a book review on the blog after quite a long time. This book was sent to me for review by the author, whose Karachi Deception I reviewed earlier, and though I read it at once, the review took some time to write, due to various personal commitments. I am, sort-of rusty with my reviews now, so I just hope I have done justice to the book! 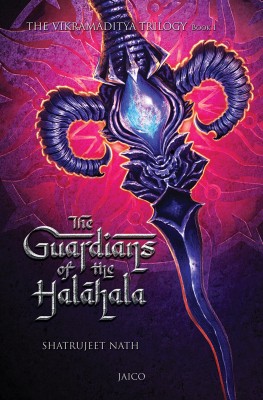 Halahala – the deadly poison which Lord Shiva famously consumed, and contained in his throat, becoming the Blue-Throated One;

Vikramaditya – the great ruler of Ujjain, whose stories have seamlessly merged into legend and myth, and is most well-known for his association with Vetaal, the ghost.

The former is a part of religion and myth, and the latter, of history and legend. How do you combine the two? Rather tough, wouldn’t you think? And yet, Shatrujeet Nath does just that, in his second book, The Guardians of the Halahala, merging myth and legend in a gripping narrative that kept me engaged, till the very end, and then, made me wish I didn’t have to wait long for Book Two!

The story links the two legends with Lord Shiva handing over a dagger containing a minute portion of the deadly poison, which escaped destruction, to Vikramaditya for safekeeping. The question is, why would a God trust a human with the deadliest weapon in the Universe, especially when the Devas and Asuras are both trying to get their hands on it?

Come to think of it, is this the first time we have heard of such a story? Not really. The gods have always approached humans in their wars against the demons. Think of Rama, Krishna, Muchkunda….. the list is endless. Here, however, the king becomes the target of both, the Devas and the Asuras, which is quite an interesting concept. Besides, the king is also fighting his human enemies, as well as intrigue among those he considers his equals, which makes the story an action packed one! And all this, to maintain the balance in the world. As Nath so succinctly puts it –

“For the tyranny of virtue is as unbearable as the stranglehold of vice.”


There are characters we have heard of, in some of the stories of that period, some we have heard of in our myths, and then, there are others, whom I, at least, have never heard of. The one thing I enjoyed though, is the depth of the characters, at least the major ones. I especially enjoyed the relationship between Vikramaditya and Vararuchi, his step brother, and the tension between Vararuchi and his step mother. I also liked the way the author has depicted Vikramaditya’s sister, a girl with the potential of greatness, but married to a nitwit of a prince, who will never be the king. His depiction of the Devas and Asuras is especially imaginative, whether it is the Ashvins or Andhaka. Sukracharya is especially well conceived, as cunning and deceitful, but also extremely perceptive, and, at times, a lot smarter than the Devas!

Above all, I liked the manner in which he brought the Vetaal into the story, in this case, as Betaal. After all, Vikramaditya is incomplete without him, isn’t he?

As for the story, well, putting it up here would spoil it for you. I can only reiterate that the characters are well developed, the story line is interesting, and the writing is excellent. So go ahead, buy the book and read it.

Shatrujeet Nath has, once again, given us a well written, fast paced book, that will have you hooked till the very end. I can only hope he comes out with the second book soon!


Disclaimer : I received the book from the author for review. The views expressed are, however, all my own!